Materials and Methods: A single-center retrospective study was performed. The cohort included 15 patients > 18 years old who had received a second kidney graft after pancreas-kidney transplant or a second or greater kidney graft between 2013 and 2019.

Results: Median age of recipients was 45 years (range, 20-58 y). In 10 patients, the transperitoneal approach was selected. In 5 patients, the retroperitoneal heterotopic kidney retransplant technique was used. Early surgical complications (≤ 30 days posttransplant) were reported in 4 patients. Three patients had late ureteral stenosis (> 90 days posttransplant). All grafts were functioning at time of patient discharge. Mean creatinine level was 2.69 mg/dL (range, 1.23-6.26 mg/dL). The 1-year and 2-year graft survival rates were 85% and 75%, respectively. No grafts were lost because of surgical complications.

Kidney transplant is the best treatment option for patients with end-stage renal disease.1 Despite the advances made with regard to donor and recipient selection and matching and improvements in immunosuppression therapy, long-term graft survival remains moderate (37% graft survival at 15 years).2 Patients who lost their graft function may consider returning to dialysis or may consider retransplant.

Overall, among 1 of 4 and up to 1 of 3 patients on kidney transplant wait lists present with prior graft loss.3 Additionally; the number of patients who require a retransplant seems to be rising.4

Cohort
A single-center retrospective study was conducted. Data from patients > 18 years old who had received a second kidney graft after pancreas-kidney transplant (pancreas graft placed on right iliac fossa and kidney graft placed on left iliac fossa)10 or who had received greater than a second kidney graft between 2013 and 2019 were collected. Data were exacted from our authorized transplant prospective database. Informed consent was obtained from all patients included in the study.

For inclusion on a wait list for retransplant, multidisciplinary team approval was needed. Vascular patterns were assessed by an angio-computed tomography scan and evaluated by experienced interventional radiologists.

Surgical technique
A lower midline laparotomy was performed using the transperitoneal approach.7 If an extraperitoneal technique was found to be feasible, the retrope­ritoneal heterotopic retransplant technique7 was applied, which was carried out with hockey-stick incision.

The vascular anastomosis and implantation techniques were performed based on the patient’s vascular patterns; if the patient had undergone a previous transplantectomy, the technique depended on the cause and time of surgery.

The modified Lich-Gregoir technique of extra­vesical ureteral reimplantation11 was the preferred option for urinary tract reconstruction. A ureteral stent, which was scheduled to be withdrawn 4 weeks after implant surgery, was placed in all cases.

Immunosuppressive regimens
Standard immunosuppressive induction therapy consisted of tacrolimus, mycophenolate mofetil, and prednisolone. On the basis of the patient’s previous immunosensitive state, induction with thymo­globulin or basiliximab was added.

Statistical analyses
Descriptive analyses of clinical and operative variables and outcomes were carried out by calculating the average range of quantitative variables and the absolute frequencies and percentages of qualitative variables. Kidney graft survival was analyzed and summarized by using Kaplan-Meier curves. All analyses were performed using SPSS software version 17.0 (SPSS Inc., Chicago, IL, USA).

Previous surgery of transplantectomy (due to thrombosis or rejection) was performed in 13 patients. Transplantectomy was carried out simultaneously in another patient to achieve optimal requirements for implantation.

Ten patients underwent the transperitoneal approach. Anastomosis was performed to the iliac arteries in 9 patients. For venous anastomosis, the inferior cava vein was selected for 3 patients and the iliac veins for 7 patients (Table 2).

The 1-year and 2-year graft survival rates were 85% and 75%, respectively. No grafts were lost due to surgical complications (Figure 1).

Despite advances in immunosuppressive treatment, survival of the kidney graft remains limited. This fact implies that some patients with renal transplant must return to dialysis programs. Kidney transplant is considered the best treatment option for patients with end-stage renal disease,1 even in cases of retransplant.5,13

With advances in immunotherapy and surgery, transplants involving a third or fourth kidney allograft have become more common, which have increased patient quality of life and survival rates.6,14,15

Recipients of a third or fourth renal graft have many risk factors that make retransplant more challenging. Among these factors are access to vascular tissues, which become more difficult due to numerous surgical interventions, a long history of immunosuppression, and subsequent multiple comorbidities that may affect recipients.7,8,14

Our group prefers the transperitoneal approach due to more extensive bilateral vascular access. However, the retroperitoneal heterotopic transplant approach is used in cases where an early (< 1 mo) previous graft nephrectomy had proven successful and the external iliac vessels had not deteriorated.

Ureteral stenosis is one of the most common late surgical complications, with an incidence of up to 15% in some patient cohorts.17 In our study, 3 patients developed late ureteral stenosis, with 2 of them presenting with BK virus colonization.18

Despite the surgical challenges posed by retransplant, retransplant is feasible and safe when conducted at experienced centers.14 Hence, patients with loss of a previous graft should not be dismissed from undergoing retransplant, even on a previously used surgical field.7

Limitations of our study include the low number of cases and the retrospective nature of data collection of select cases.

Retransplant of a second graft after pancreas-kidney transplant and retransplant of third or fourth renal grafts are challenging but feasible procedures, which have shown evidence of reasonably positive outcomes. 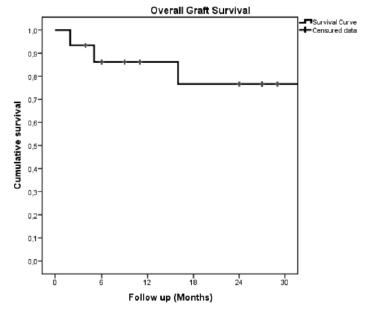