Objectives: Twice per year, the Scientific Registry of Transplant Recipients provides risk-adjusted center-specific reports of 1- and 3-year outcomes. In addition, the Registry reports 10-year aggregate survival outcomes for kidney transplant recipients. However, in this annual report, no distinction is made between outcomes of patients with a first transplant versus those with retransplants.

Materials and Methods: We analyzed data from the Scientific Registry of Transplant Recipients between 1992 and 2015 to determine outcomes after a 1st, 2nd, or ≥ 3rd kidney transplant. Recipients were stratified by donor source (living vs deceased) and transplant number, and rates of graft failure, death-censored graft failure, and death with functioning graft were determined.

Results: From 1992 to 2015, rates of graft failure and death-censored graft failure at 6 months, 1 year, 3 years, 5 years, and 10 years decreased; however, long-term rates of death with functioning graft were unchanged. Outcomes for 1st and 2nd kidney transplant were better than outcomes for ≥ 3rd transplant.

Conclusions: It would be extremely valuable if the Scientific Registry of Transplant Recipients could present stratified analyses that would account for a host of factors, including organ sequence, which tend to vary by center. The presentation of risk-adjusted outcomes in the annual Registry report could include a more comprehensive assessment of program performance. Such information would be extremely useful for transplant centers, patients, and their support networks, organ procurement organizations, and other transplant stakeholders.

Twice per year, the Scientific Registry of Transplant Recipients (SRTR) provides individual centers a report of their risk-adjusted 1- and 3- year kidney transplant (KT) outcomes and how these compare with expected outcomes. However, no comparison exists for survival beyond 3 years. At the same time, the SRTR publishes an annual report of aggregate transplant outcomes in the United States. In this report, outcomes up to 10 years posttransplant are provided, but there is no distinction between outcomes between a 1st KT and retransplants. This is important, since retransplants comprise almost 20% of the annual number of KTs and potentially have different outcomes versus a 1st KT.1 Furthermore, this proportion is projected to increase with the continued use of extended-criteria donor organs and the considerable advantage that the current kidney allocation system affords to highly sensitized patients.2,3 Historically, outcomes after a 2nd transplant have been modestly worse than first-time transplants, whereas a 3rd or greater transplant has a significantly worse outcome.4-10

Having longer-term data stratified by transplant number would be useful for transplant centers, allowing centers to compare their institutional data versus national data. Although not risk adjusted, this information would be helpful for internal quality assessment or quality control analyses. In addition, patients and their families would be able to access this information, which may empower them to set realistic expectations of their transplant and act as advocates for themselves should the differences between a deceased and living donor become pronounced.

Design, setting, and population
This retrospective study used data from the SRTR. The SRTR data system includes data on all donors, candidates on wait lists, and transplant recipients in the United States, submitted by the members of the Organ Procurement and Transplantation Network. The Health Resources and Services Administration of the US Department of Health and Human Services provides oversight of the activities of the Organ Procurement and Transplantation Network and SRTR contractors.

Data collection and analyses
We analyzed SRTR data of adult KT recipients between 1992 and 2015 to determine the rates of graft failure, death-censored graft failure, and death with functioning graft after a 1st, 2nd, or ≥ 3rd KT. All analyses were stratified by donor type (living or deceased), transplant year, and transplant number (1st, 2nd, ≥ 3rd). Similar to the aggregate SRTR report, actual rates were determined (eg, 10-year graft survival in 2015 was calculated for transplants done in 2005). All statistical analyses were performed using SAS version 9.4 (SAS Institute, Cary, NC, USA).

Graft failure was defined as death, retransplant, or return to chronic dialysis.

Deceased-donor transplants, 1992 compared with 2015
Table 1 shows deceased-donor transplant outcomes observed for 1st, 2nd, and ≥ 3rd transplants in 1992 compared with outcomes observed in 2015. For each group at each time period studied (6 months, 1 year, 3 years, 5 years, and 10 years), there was a decrease between 1992 and 2015 in the rate of graft failure and death-censored graft failure. In contrast, the incidence of death with functioning graft decreased in the first 3 years posttransplant, but there was no difference at 5 and 10 years posttransplant.

2015 Data: comparison of aggregate outcome data with outcome by transplant number
The 2015 SRTR rates for graft failure, death-censored graft failure, and death with functioning graft are shown in aggregate and separately for 1st, 2nd, and ≥ 3rd transplants in Figure 2. Outcomes for recipients of both deceased-donor and living-donor procedures are shown. Even at 6 months posttransplant, dif-ferences can be seen in the aggregate data compared with data by transplant number. At 3, 5, and 10 years posttransplant, these differences had become more pronounced.

To date, the SRTR only reports longer-term KT results in aggregate. Herein, we show considerable dif-ferences in outcomes among 1st, 2nd, and ≥ 3rd transplants. Although there were only small differences in 1st compared with 2nd transplant outcomes for both living-donor and deceased-donor procedures, those having a ≥ 3rd transplant had significantly worse outcomes. Of interest, although there was reduction over time in graft failure and death-censored graft failure, for all subgroups, there was little change 1 year after transplant in the rate of death with functioning graft. In fact, for some, the rate of death with functioning graft at 5 and 10 years posttransplant had increased. This was likely due to increased willingness to transplant older patients and patients with more comorbidities.11,12

It would be ideal if longer-term national outcomes were published by transplant number. Although unadjusted, such information would be useful for a general comparison of center results to national results, as well as for those designing or reporting on longer-term clinical trials. In addition, such information would be useful for patients and their advocates in formulating realistic expectations of their care, especially in the retransplant setting. This type of information and education has been shown to aid in decision-making for a recipient’s support network, which has led to an overall improved outcome in KT13 and could increase donations from living donors.14

Given the data presented here, it would be extremely valuable if SRTR could present these types of stratified analyses to account for a host of factors, including organ sequence, which tend to vary by center. One solution may be if SRTR simply performs risk-adjusted outcomes in presenting the annual report for a more comprehensive assessment of program performance. Such information would be useful for transplant centers, patients and their support networks, organ procurement organizations, and other transplant stakeholders.

From the Department of Surgery, Division of Transplantation, University of Minnesota, Minneapolis, Minnesota, USA
Acknowledgements: The authors thank Jon J. Snyder, PhD, MS, and Bertram L. Kasiske, MD for review of the article. The authors declare no funding was received for this work and have no conflicts of interest to disclose.
The data reported here were supplied by the Minneapolis Medical Research Foundation as the contractor for the Scientific Registry of Transplant Recipients (SRTR). The interpretation and reporting of these data are the responsibility of the authors and in no way should be seen as representing the official policy or view of either the SRTR or the US government.
Corresponding author: Oscar K. Serrano, Department of Surgery, Division of Transplantation, 420 Delaware Street SE, Mayo Mail Code 195, Minneapolis, MN 55455, USA
Phone: +61 26257997
E-mail: serra061@umn.edu 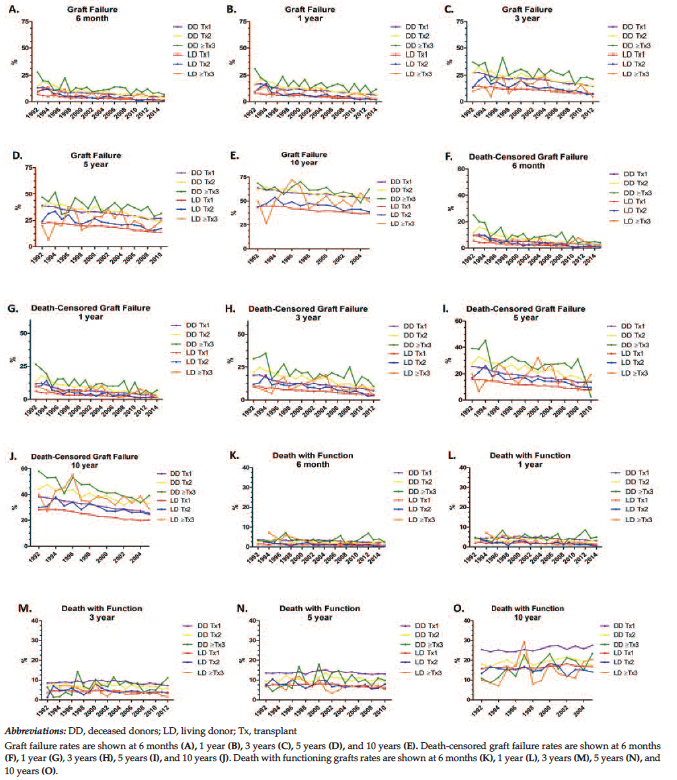 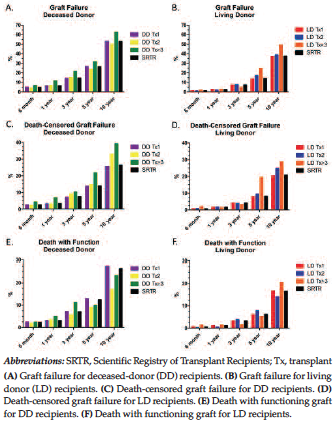 Figure 2. Outcomes for Recipients of Deceased- and Living-Donor Procedures After a 1st, 2nd, and Beyond 3rd Kidney Transplant Between 1992 and 2015 Com - pared With Reported Scientific Registry of Transplant Recipients Outcome Data