We read with great interest the investigation by Ferede and associates in which they concluded that minimizing graft rewarming in the recipient (WIT2) reduced delayed graft function (DGF) but did not affect 3-month serum creatinine levels.1 We would like to point out some inconsistencies and make the following comments.

Delayed graft function is acute kidney injury after kidney transplant and is associated with worse short-term and long-term outcomes and higher acute rejection.2 Kidneys from deceased donors, whether from donors after brain death (DBD) or donors after cardiac death (DCD), have inferior outcomes compared with living donors because of the superior donor and graft quality, controlled ischemic times, and absence of the brain death phenomenon in living donors.3 The primary study outcome measurement was identified later in the methods section as the effect of WIT2 on DGF, and secondary outcomes were identified as incidence of DGF, length of hospital stay, and 3-month serum creatinine level.1

The authors presented a detailed description of how their living donors were selected and the strict adherence to the Istanbul protocol in selecting the 10 unrelated donors, something that appears to have absolutely no bearing or relevance to either WIT2 or DGF.

In their immunosuppression protocols, they do not explain why any recipient received tacrolimus as part of induction. The criteria used in selecting the type of induction agent for the various donor kidneys are unclear. Nearly 75% of their recipients received kidneys from either DBDs or DCDs; because these types of donors possess independent risk factors for DGF, their choice of using antithymocyte globulin (ATG) in only 12% is surprising, and it is remarkable that only 18% of the cohort developed DGF.3-5 The risk of DGF in living-donor kidneys is in the single digits; however, these rates are 30% in DBD and 50% in DCD kidneys, which also involve significant primary nonfunction rates.2,4,5 One would assume that concerns of risking DGF in these recipients would be even more pressing, but only 12% of all recipients received ATG induction.1 The 2017 Organ Procurement and Transplantation Network/Scientific Registry of Transplant Recipient data showed the increasing use of ATG in 75% of kidney transplants in the United States,6 raising questions about the authors’ claim of risk-adjusted induction. With 74% of the cohort receiving grafts from higher-risk deceased donors and ATG used in only 12%, it was surprising that only 10% developed acute rejection. In their landmark study, Brennan and colleagues showed that, compared with basiliximab, ATG induction resulted in a significantly lower incidence of acute rejection, especially in high-risk patients.7 In their study, Ferede and associates1 did not clarify which induction group had what percentage of acute rejection.

Regarding maintenance immunosuppression, 20 mg of oral glucocorticoids were started on day 5 and “gradually” tapered to 5 mg before recipients were discharged.1 It would be difficult to explain how this was accomplished when the median hospital stay for recipients was 9 days.

Eighty-four recipients developed DGF, with the highest incidence in those who received DCD kidneys (7/17); however, the authors did not state how many of the remaining 77 were living-donor kidneys.1 Clearly, DCD recipients have the greatest risk,8 and thus it is likely that most of the remaining 77 with DGF were in the DBD kidney cohort and not in the living-donor kidney cohort. The authors found a longer WIT2 to be a significant risk factor for DGF; however, because WIT2 was not that different in the 3 donor groups, it was perhaps the prolonged donor warm ischemia in the DCD group that resulted in the high percentage of patients with DGF.8

How did the authors perform the anastomosis with the kidney outside the wound? We keep the kidney wrapped in cold swabs during anastomosis (Figure 2) and supplement it with cold saline irrigation to maintain low temperatures. The use of the contiguous cava for augmenting all right renal veins by the authors is perhaps overkill because not all right veins are short; in fact, the resulting redundancy, kinking, and turbulence can cause thrombosis.9 Another reason that the right renal veins were augmented was to match the length of the renal artery in order to utilize the Carrell patch, which, with experience gained in living-donor transplant procedures, is no longer considered necessary.

The authors reported a significant correlation between WIT2 and DGF but reported no impact on short-term outcomes.1 This finding is in contrast to current opinion in the literature where DGF is linked to significantly reduced graft survival.2-5 Despite an 18% incidence of DGF, the authors found no negative consequences. This is especially relevant because most of the grafts were from DBDs and DCDs; grafts from DBDs and DCDs, and those from expanded criteria donors (ECDs), have a higher risk profile because of kidney quality and the effects of cold and donor warm ischemia.2-5

Minimizing WIT2 is the goal but not at the cost of the quality of the anastomosis, and measures can be taken to prevent damage in cases where WIT2 is prolonged. One measure is wrapping the graft in cold slush-filled swabs and irrigating with cold saline.10 Kidneys rewarm at around 0.48°C per minute, but rewarming can be further slowed by irrigating the graft with cold saline, allowing grafts to safely tolerate longer WIT2.10,11

Graft rewarming is not the only variable that impacts graft outcomes; donor type and graft quality also play a big role in determining extent and speed of recovery from the effects of ischemia.10 Living-donor grafts have less incidence of DGF and acute rejection and have better function at 1 year compared with DCD, ECD, and DBD kidneys because of better quality and less ischemic time.2 What is puzzling in the Ferede study1 is that, although only 26% of grafts were from living donors in a cohort with 18% DGF, surprisingly, graft function at 3 months was found to be similar in all donor types, suggesting that ECD, DBD, and DCD kidneys recover as quickly as living-donor kidneys. Therefore, with a median WIT2 of 43 minutes in kidneys from all types of donors, how are short-term outcomes and serum creatinine similar in ECD/DCD and living-donor kidneys? In the authors’ study, we feel that it was not the WIT2 but donor kidney quality that determined the onset of DGF.

Why the authors found that time on dialysis influenced DGF is unclear1; the only plausible explanation would be that these were recipients who received ECD, DBD, or DCD kidneys because living-donor recipients generally get transplanted earlier.

Given the importance of minimizing WIT2 and the large cohort, the study did not deliver the expected impact.

From the Division of 1Transplant Surgery and 2Nephrology, Rehman Medical Institute, Hayatabad, Peshawar, Pakistan
Acknowledgements: The authors have no sources of funding for this study and have no conflicts of interest to declare.
Note From The Editor: This letter was sent to the authors of the original article referenced here (Ferede and associates1). The authors declined to reply.
Corresponding author: Taqi F. Toufeeq Khan, Division of Transplant Surgery, Rehman Medical Institute, Hayatabad, Peshawar, Pakistan
E-mail: taqi.toufeeq@rmi.edu.pk 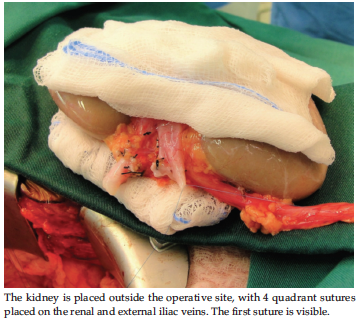 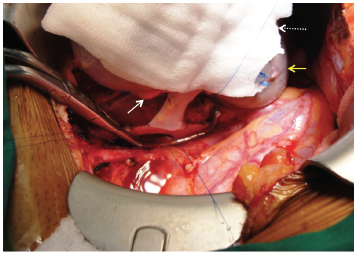 Figure 2. Kidney (Yellow Arrow) Is Lowered Into the Wound and Placed on Cold Slush-Filled Swabs (Solid and Dashed White Arrows) for Vascular Anastomoses to Prevent Rewarming