Lung transplant has become the mainstay of therapy for most end-stage lung diseases. Airway com­plications are one of the most important problems during the first year after lung transplant. In this context, the most severe form of bronchial stenosis reported in the literature is vanishing bronchus syndrome, which is the obliteration with atresia of the ostium of a lobar bronchus, usually related to ischemia and infection. Ex vivo lung perfusion is a novel strategy for lung allograft preservation that keeps the organs at physiologic protective conditions. Nevertheless, many ex vivo systems work with lungs in supine position, and upper regions (middle lobe and lingula) can have lower perfusion supply, increasing the risk of a relative ischemia. We report a case of vanishing middle bronchus after ex vivo reconditioning bilateral lung transplant in a 45-year-old man with nonspecific interstitial pneumonia, whose posttransplant course was complicated by Aspergillus fumigatus infection.

Lung transplant is often the only treatment option for patients with end-stage lung disease,1 and ex vivo lung perfusion (EVLP) may increase the number of patients treated with lung transplant.2,3 Com­plications due to bronchial anastomosis in lung transplant has remained one of the main reasons for increased morbidity and mortality. These com­plications can occur in up to 27% of patients undergoing lung transplant, with 13% of these patients needing interventional endoscopic treatment. Because bronchial circulation is not reestablished during the transplant procedure, these complications seem to be related to ischemia.4 The literature has reported a strong correlation between the presence of Aspergillus species and airway complications, in particular an increased number of bronchial stenosis.4 The obliteration of a lobar bronchus (either acute or progressive) in lung transplant is called vanishing bronchus syndrome (VBS).5 Two studies have described a low prevalence of VBS in lung transplant recipients.6,7

After discharge, microbiologic sputum analyses remained negative, but spirometric values did not improve. On posttransplant day 90 at the 3-month follow-up, the patient was hospitalized in the pulmonology department. A chest CT scan showed atelectasis of the medium lobe and division of dependent zones. A fibrobronchoscope examination revealed anatomically normal findings, with some purulent secretions (Figure 1). Acute grade A2 rejection was treated by pulse steroid therapy and immunosuppression, with the patient shifted from cyclosporine to tacrolimus. Microbiological cultures were positive for Aspergillus fumigatus complex, and voriconazole therapy was immediately started. Predischarge spirometry revealed FEV1 of 50% and FVC of 49%. After discharge, the patient was asymptomatic and spirometric values were stable.

At the 6-month follow-up after lung transplant, a chest CT scan confirmed complete atelectasis of the middle lobe. At endoscopic control, the lumen of the middle lobe bronchus was obliterated with presence of scar tissue (Figure 2). Biopsies showed minimum acute grade A1 rejection, and spirometric values were stable (FEV1 of 48%, FVC of 52%). A further follow-up visit showed that the middle lobe parenchyma was finally aerated with resolution of atelectasis (probably because of collateral ventilation); however, endoscopy did not show resolution of bronchus obliteration.

Airway complications are one of the most common posttransplant causes of morbidity and death.8 Causes of these complications may depend on both the absence of blood supply to the donor bronchus and on the length of ischemia.9 The following factors may also influence healing of the lower airways: inadequate organ preservation, invasive infection, intensive immunosuppressive therapy, and allograft rejection.8,10

One of the most difficult tasks during EVLP is keeping the isolated explanted lung edema free to increase the performance of the graft.13 Because many ex vivo systems work with lungs in the supine position, upper regions can have lower perfusion supply, resulting in these regions having an increase in relative ischemia. Moreover, bronchial perfusion is anatomically guaranteed by bronchial arteries, originating from the aorta. During lung transplant, this connection is interrupted and not restored. Both of these facts could partially explain the increased risk of developing stenosis of the intermedius, middle, and lingular bronchus. New approaches of bronchial perfusion have been tested, which have shown encouraging results.14

This is the first case in the literature of VBS after EVLP in bilateral lung transplant. Although bronchial stenosis is a frequent complication after lung transplant, VBS could be a rare evolution. For this reason, prevention with endobronchial stents or dilatation and antimicrobic therapy is still controversial.15 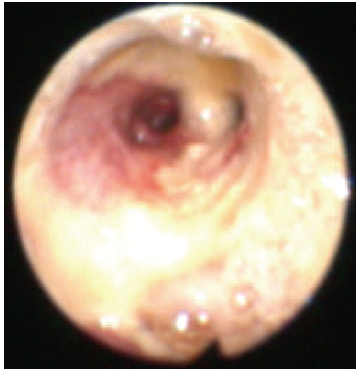 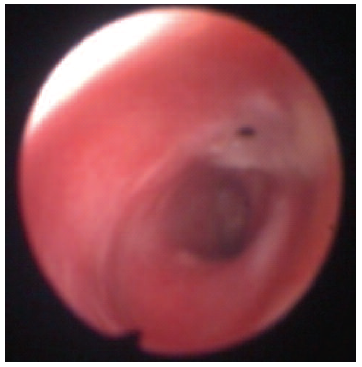 Figure 2. Obliteration of the Middle Bronchus With Scar Tissue