Posterior reversible encephalopathy syndrome (PRES) is a neurotoxic state, predominantly involving white matter with vasogenic edema in the parieto-occipital region.1 It is strongly associated with hypertension but can also occur in diverse clinical conditions, including renal disease, sepsis, autoimmune diseases, eclampsia/preeclampsia, organ transplantation, and exposure to immunosuppressants.1-3 The popular hypotheses of PRES imply potentially local or even systemic development of endothelial-related vascu-lopathy such as failed autoregulatory mechanisms with endothelial injury by severe hypertension or a systemic inflammatory state leading to vasocon-striction and subsequent hypoperfusion.1,2 Herein, we report a first case of vasculopathy of grafted hepatic vessels after living-donor liver transplant (LDLT) in a parturient woman with PRES caused by preeclampsia complicated with microangiopathic hemolysis, elevated liver enzymes, and low platelet (HELLP) syndrome and worsened by LDLT and immunosuppressive agents.

The patient provided informed consent to anonymized reporting of clinical details. The patient, a 33-year-old woman, presented to the emergency room for evaluation of jaundice and tea-colored urine for 5 days after normal spontaneous delivery. She was diagnosed with preeclampsia with HELLP syndrome during labor. In addition, the patient was found to have fulminant hepatitis B and acute fatty liver of pregnancy, complicated with hepatic failure and hepatic encephalopathy, as shown by ultrasonograph-guided liver biopsy.

During hospitalization, the patient had persistent hypertension and disturbed vision, with devel-opment of headache. A nonenhanced brain computed tomography showed no intracranial hemorrhage or other significant findings. Therefore, brain magnetic resonance imaging was performed and PRES was diagnosed based on symmetrical lesions in the bilateral occipital lobes (Figure 1). Antihypertensive agents for aggressive blood pressure management and hydrocortisone for improving vasogenic edema were administered. With her hemodynamic con-dition relatively stable, the patient received emergent LDLT.

The surgical procedure was performed without complications, and the pathology revealed chronic hepatitis with microvesicular steatosis and biliary stasis. Within the first 3 days after LDLT, hemo-dynamic stability and progressive improvement of clinical data, including platelet count, coagulation profile, liver function, and bilirubin levels, were noted. In addition, daily follow-up Doppler sonography performed by an experienced radiologist on the transplant team showed patency of anastomotic and intrahepatic vessels without thrombosis. On the day after LDLT, she regained consciousness and began to receive tacrolimus. We monitored the plasma con-centration of tacrolimus, with levels of therapeutic drug monitoring of tacrolimus slowly increasing day by day (from 13.6 to 16.5 ng/mL). However, levels were still within the normal therapeutic range.

Four days after transplant, the patient had a seizure attack with loss of consciousness. Repeated brain magnetic resonance imaging scans showed diffuse swelling of cerebrum and cerebellum with uncal herniation and brainstem compression, so PRES progression was highly suspected. With thorough surveys of triggers, besides liver transplant, tacrolimus intoxication (therapeutic drug level of 21.4 ng/mL) was thought to be the primary cause to worsen PRES. Because of this, tacrolimus was promptly suspended. After the abrupt episode, rapid impairment of liver function, hyperbilirubinemia, thrombocytopenia, and prolonged prothrombin time/activated partial thromboplastin time occurred. Doppler sonography showed reduced flow of grafted intrahepatic vessels without thrombotic formation of anastomotic sites (Figure 2). An emergent computed tomography with contrast of abdomen showed hypo- and nonen-hancement (Figure 3), and gross hepatic infarction was diagnosed. The patient gradually deteriorated with sequential multiple organ failure and died 7 days after LDLT.

Posterior reversible encephalopathy syndrome shows clinical and radiologic conditions charac-terized by headache, altered mental status, seizures, and disturbed vision.2,3 There are no proven strategies for management of PRES, but early diagnosis and rapid withdrawal of any triggers appear to speed recovery and avoid complications. Interventions include aggressive control of blood pressure, early delivery in parturient women with eclampsia/preeclampsia, reduction or termination of immunosuppressant agents, or, as in our patient, administration of corticosteroids.2,3 However, both LDLT and overexposure to tacrolimus may aggravate clinical manifestations of PRES. Posterior reversible encephalopathy syndrome appears to be a rare and early complication after liver transplant and treatment with calcineurin inhibitors. So far, published reports have only documented newly onset cases.4-7 However, our patient had PRES before she received LDLT, suggesting underlying local or systemic endothelial dysfunction. Therefore, we speculated that there may be a correlation between PRES and early pathogenesis of grafted hepatic vessels in patients after LDLT.

Almost all causes of graft ischemia and even infarction have been correlated with vascular events such as thrombotic formation of the hepatic artery, thrombus or stenosis of the portal vein, and anas-tomosis stricture. Other causes include prolonged ischemic time, shock, hypoglycemia, and sepsis during the recovery period.8

Vascular complications after liver transplant are rare but devastating. The survival of transplanted livers is significantly reduced by hepatic artery thrombosis (HAT) and portal vein thrombosis (PVT), resulting in loss of liver allografts and even mortality. The incidence of early HAT has been shown to vary between 2.1% and 4.4%.9-11 The risk factors for early HAT include low recipient and donor weight, cytomegalovirus mismatch, arterial variants, pro-longed operation time, retransplantation, use of conduits, longer reperfusion time, smaller graft size, previous episodes of HAT, and multiple anastomoses.9-11 Early PVT, similar to HAT, is also a rare complication, affecting between 1.3% and 3.5% of patients undergoing liver transplant.12,13 The risk factors for PVT include technical issues, preexisting PVT, small portal vein diameter, prior splenectomy, pediatric transplantation, and use of venous conduits for portal vein reconstruction.12,13

We had full discussion about the surgical course of our patient with the liver transplant team; none of the above risk factors were apparent. The surgical time and graft ischemic time were also within acceptable ranges based on the experiences of our liver transplant team. In addition, intraoperative and postoperative vascular Doppler ultrasonographic scans had confirmed the patency of the hepatic artery and the portal vein. Therefore, surgical issues resulting in early HAT and PVT in our patient were excluded.

Moreover, there was no apparent evidence of unstable blood glucose level, uncontrollable sepsis, or shock, which can necessitate inotropic agents or vasopressors, before the catastrophic episode in the intensive care unit.

Many authors have suggested that bacterial infections, cytomegalovirus infection, and organ rejection may be facilitating factors for the occurrence of PRES in the early posttransplant period.5,6 Our patient, however, did not show apparent signs of infection or organ rejection.

Although the exact pathophysiologic mechanisms of PRES are still unclear, pathogenesis of the vascular endothelium has been proposed.1-3 Endothelial dysfunction induced by PRES may result in profound vasospasm, activation of the coagulation cascade, and even production of procoagulant condition.1,3 In addition, HELLP syndrome, a pregnancy-related thrombotic microangiopathy, has been associated with the development of PRES.1,14 It occurs in 0.2% to 0.9% of all pregnancies15,16 and coexists in 10% to 20% of parturient patients with severe preeclampsia.15 Orabona and associates16 reported that women with HELLP syndrome had a higher risk for subsequent endothelial dysfunction, which may result from an enhanced inflammatory response. The proinflam-matory status may induce endothelial activation and oxidative stress and contribute to systemic vascular abnormalities, including cardiovascular disease or PRES, as in our patient. After the above surgical and nonsurgical risk factors were excluded, we strongly suggest that progression of underlying PRES in our patient potentially influenced the vasculopathic production of grafted hepatic vessels and finally resulted in catastrophic hepatic infarction.

Neurotoxicity after liver transplant contributes to increased morbidity and mortality. The incidence of moderate or severe central neurotoxicity has been shown to be higher in patients treated with tacro-limus versus cyclosporine; the duration of symptoms has also been shown to be greater in patients who receive tacrolimus.17 Posterior reversible encepha-lopathy syndrome is known to be a serious neurologic complication after liver transplant and may be associated with calcineurin inhibitors, which are used for immunosuppressive therapy after solid-organ transplant. The prevalence of PRES after solid-organ transplant is 0.49%.5,7,18 In addition, more than 80% of PRES cases develop within the first 90 days (average 31 days) after transplant, even when plasma levels of calcineurin inhibitors are within the therapeutic range.6

Immunosuppressive agents could damage endo-thelial cells by means of direct toxicity on vascular endothelium, vasoconstriction, and microthrombosis formation.3,4,7 According to the Bartynski theory of PRES, underlying biologic processes, including enhanced systemic endothelial activation, leukocyte trafficking, and vascular instability, alone or in combination, could result in organ or systemic hypoperfusion in many patients with PRES.1,18 These processes may potentially aggravate underlying endothelial dysfunction and induce hypoperfusion or even, as in our case, infarction of the grafted liver. In our patient, underlying PRES progressed only 4 days after LDLT and administration of tacrolimus, hinting that tacrolimus may speed or aggravate production of preexisting endothelial dysfunction, especially at overdose exposure.

Posterior reversible encephalopathy syndrome should be promptly recognized, since it is reversible and can be readily treated by control of blood pressure and quick withdrawal of offending factors.3 Late recognition of this syndrome, poor control of hypertension, prolonged seizures, inability to correct triggering metabolic abnormality, or persistent use of culprit drugs could potentially result in permanent neurologic deficits.18 Although blood levels of tacrolimus tend not to correlate with PRES, dose reduction or termination of tacrolimus often results in alleviation of toxicity after the development of PRES.5,7 Switching immunosuppressants either to another calcineurin inhibitor or to another group of immunosuppressants is controversial as an effective strategy in clinical outcomes. Recently, mycophenolic acid and everolimus have been preliminarily considered as substitute drugs for tacrolimus.6 This new strategy may not only allow clinicians to avoid acute organ rejection but can also reduce or even eliminate tacrolimus-associated toxicities.

It seems reasonable to assume that impairment of vascular endothelium caused by PRES may affect systemic circulation. This syndrome may not only lead to neurologic deficits but may also reduce perfusion of transplanted organs and even result in graft failure in patients receiving organ transplant if clinicians do not recognize this syndrome and reverse triggering factors in time. The progressive aggravation of underlying PRES-induced endothelial damage by overdose of tacrolimus is regarded as the major cause leading to vascular pathogenesis of grafted hepatic vessels after LDLT in our case.

Posterior reversible encephalopathy syndrome can potentially develop into severe vasculopathy, inclu-ding vasospasm or prothrombotic states, leading to local or systemic organ hypoperfusion. The syndrome is reversible and readily treated by controlling blood pressure and rapid withdrawal of the triggering factors, including reduction or termination of immuno-suppressant treatment. If recognized and treated quickly, the rapid-onset symptoms and radiologic features usually fully resolve within days to weeks. In liver transplant recipients, severe posttransplant hypoperfusion of the grafted liver may result in loss of the liver allograft and, in severe cases, mortality. It is reasonable to assume that, in our patient, poor control of underlying PRES-associated endothelial damage because of tacrolimus overdose led to the severe hypoperfusion of grafted hepatic vessels and subsequent hepatic infarction. This case highlights tacrolimus as a potential PRES trigger and may inform clinical decisions regarding tacrolimus administration in liver transplant recipients with preexisting PRES. 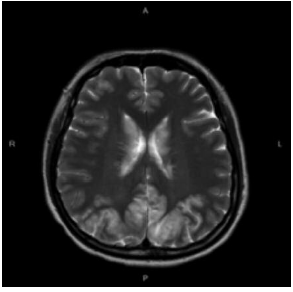 Figure 2. Reduced Flow of Grafted Hepatic Artery (A) and Portal Vein (B) on Doppler Sonography 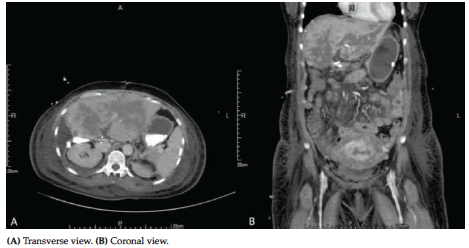