We present the use of a self-expandable covered metallic stent (UVENTA; TaeWoong Medical, Gyeonggi-do, South Korea) to treat a ureteral stricture after kidney transplant. In this report, we describe the procedure and short-term outcomes of a patient with a recurrent distal stricture who did not respond to percutaneous balloon dilation. We decided to place this temporary stent as an alternative to complex surgery. The aim of the procedure was to get a chronic dilation of the stricture up to 7 mm to stabilize the fibrotic tissue. The procedure was easily and quickly performed by an antegrade and retrograde combined approach. The postoperative course was uneventful. The stent was left in situ for 7 months. No com­plications were noted, and the renal function remained stable. The stent was easily removed, and 5 months later there were no signs of recurrence. The UVENTA device was shown to be an easy, safe, and effective minimally invasive treatment for ureteral stricture in renal transplant. Proper permanence time and long-term results need to be explored.

We present the case of a 27-year-old male patient who underwent a living-donor renal transplant in 2008. The transplant was performed on the left external iliac vessels with a ureteral reimplantation according to the Lich-Gregoir technique. A severe stricture of the distal ureter occurred 1 month after stent removal. Antegrade balloon dilation was successfully performed. Follow-up was negative for about 8 years with a moderate hydronephrosis but with stable renal function (creatinine level of 1.5 mg/dL) and without any obstruction at renal scan. In June 2016, the patient was admitted to the emergency department due to acute renal failure (creatinine level of 3.4 mg/dL) with severe hydronephrosis. A nephrostomy tube was placed, and a pyelogram showed a complete obstruction of the uretero-vesical anastomosis. The stricture was dilated with a balloon, achieving an incomplete result. A pyelogram performed 10 days later showed a persistent stricture (Figure 1). Because of the complexity of this case and after we obtained specific informed consent, we decided to place a self-expandable covered metallic stent (UVENTA, TaeWoong Medical, Gyeonggi-do, South Korea) as the last option before attempting surgery. The procedure was performed under spinal anesthesia. The stent (length of 6 cm, diameter of 7 mm) was placed by a combined retrograde and antegrade approach.

For the procedure, a 0.035-inch stiff guidewire was passed through the nephrostomy and inside the bladder by a 22F rigid cystoscope. The guidewire was pulled at the external urethral meatus, and the specific stent delivery device was inserted on this guidewire. The radiopaque marker on the top of the system was placed at the level of the ureteropelvic junction to completely cover the entire stricture, without leaving a too long portion of the stent inside the bladder. The delivery system was easily removed with the stent correctly opened (Figure 2).

The total operative time was 15 minutes. The bladder catheter and pyelostomy were removed on postoperative days 1 and 2, respectively, and the patient was discharged on day 4. The patient’s creatinine level was 1.6 mg/dL with a mild hydro­nephrosis. Considering the lack of data regarding indwelling time and the possible complications in this specific setting, we decided to remove the stent after 7 months. During this period, the patient’s renal function was stable and he showed chronic dilation. The patient had no urinary symptoms or stent migration. No infections were recorded. The stent was easily removed endoscopically (Figure 3), and the patient did not require further hospitalization. Five months later, the patient showed stable renal function without obstruction on renal scan.

Ureteral strictures after renal transplant require complex management.1 Endoscopic treatment is usually the first step. The long-term success rate of balloon dilatation is 30% to 40%, with better results for distal and short strictures.2,3 Surgical reconstruction is a demanding procedure due to extensive fibrosis and unusual anatomy. Ureteral reimplantation and reconstruction with the native ureter have resulted in the highest success rate (up to 85%), despite a high risk of perioperative complications.4 Some alternative treatments have been sporadically described. Extra-anatomic stents have been considered as a permanent solution for recurrent strictures in patients unfit for surgery, having fewer complications compared with a standard indwelling ureteral stent.5

Recently, a new generation of self-expandable covered metallic stents (UVENTA) has been pro­posed for palliative use in malignant ureteral obstructions.6-9 The main feature of this stent is the high radial force on its central portion, which can lead to effective compression of the stricture. Available diameters and lengths range from 7 to 10 mm and from 6 to 20 cm, respectively. These devices are designed as an alternative to standard double J ureteral stents in patients with ureteral obstruction due to malignant compression. The aim is to reduce the risk of stent-related symptoms, malfunctions, and obstructions. Good results have been described over short and medium follow-up. Tumor progression beyond the stent is reported as the main cause of reobstruction.6 One study reported a high rate of severe complications (ureteroarterial fistula, ureterovaginal fistula, ureteroenteric fistula) that can be related to oncological disease.7

To the best of our knowledge, this is the first case reporting the use of this device in the treatment of ureteral stricture after renal transplant. We decided to use UVENTA in this patient as a further minimally invasive option before attempting surgery.

We based our decision on reports on another self-expandable stent (Memokath 051, Pnn Medical, Kvistgaard, Denmark). The first descriptions were by the same group (in 2005 and in 2007) on 4 patients.10,11 Migration of the stent was reported in 1 case, recurrence of the stricture after removal in 1 other, and good results in the third and fourth cases with stents still inside. In the largest series on 8 patients published in 2013, 4 patients had no complications with the stent in situ after 4 years, 3 were without stricture after removal (after a mean indwelling time of 7 months), and 1 had stent migration.12

Our idea was to perform a continuous long-term dilation to stabilize the fibrotic tissue. This follows the mechanism of action of a temporary urethral stent. We observed 3 main evidences of success after this first case: the easy placement and removal, the absence of stent-related complications, and the efficacy with the stent in situ and in the first months after its removal. Stent placement was easy and fast with the technique that we have described here. Both retrograde and antegrade methods have been described in native ureters. In our experience, a pure retrograde approach in transplant recipients is usually not feasible or can be tricky. An anterograde or combined approach is probably the best option for these cases but should be also based according to the personal skills of the surgeon. Another important evidence of success is the complete and long-lasting opening of the stricture without adverse effects or complications with the device in situ and without migration. The stent led to an effective and safe compression of the stricture during the indwelling period.

Questions remain about permanence time and long-term efficacy. The ideal time for removal of the device has not yet been determined. These stents are designed as a temporary palliative solution in the oncologic setting. With the consideration of a complete and stable opening of the stricture, we decided to remove the stent after 7 months to avoid the risk of possible complications. The removal procedure was easily performed in an outpatient setting. Long-term efficacy of chronic dilation is also unknown; however, our patient is recurrence free 5 months after stent removal.

In our experience, the UVENTA device allowed an easy, safe, and effective minimally invasive treatment for ureteral stricture after renal transplant. More cases are needed to explore longer-term permanence of placement and to evaluate its efficacy in long-term stabilization of strictures.

From the 1Department of Urology, the 2Department of Nephrology and Renal Transplantation, the 3CTO Clinical Research, and the 4Department of Radiology, Città della Salute e della Scienza di Torino, Molinette Hospital, University of Turin, Turin, Italy
Acknowledgements: The authors have no sources of funding for this study and have no conflicts of interest to declare.
Corresponding author: Ettore Dalmasso, C. so Bramante 88, Turin, Italy 10126
Phone: +393387341300
E-mail: ettore.dalmasso@gmail.com 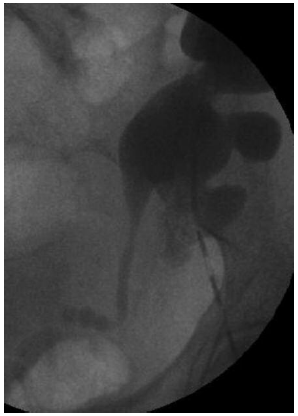 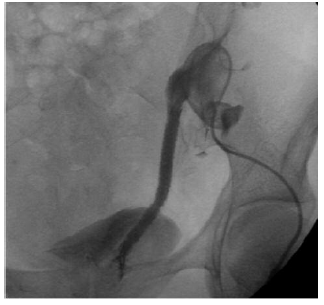 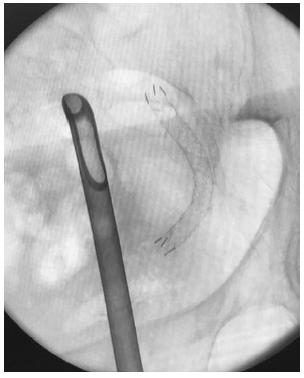 Figure 3. Endoscopic Removal of the Stent