We describe a case of a 24-year-old female renal transplant recipient who, 10 years after receiving a deceased-donor kidney, presented with acute and massive increases in serum creatinine and proteinuria levels of 13 g over 24 hours. At a previous outpatient clinic visit, her baseline serum creatinine was noted to be 87 µmol/L; on admission, serum creatinine was 1377 µmol/L. Renal biopsy results were consistent with acute cellular rejection with severe interstitial lymphoplasmacytic infiltrates and edema with no evidence of glomerular pathology, including transplant glomerulopathy. The immunofluorescence test results were negative, and the ultrastructural features were consistent with podocytopathy with no immune deposits present. We believe that this is the first case of acute cellular rejection typified by severe interstitial lymphoplasmacytic infiltrates and edema with severe proteinuria secondary to minimal change disease (or podocytopathy).

We report a case of a 24-year-old female patient who underwent deceased-donor renal transplant 10 years previously. The cause of her native kidney disease was unknown. The patient presented with sore throat, runny nose, fever, dry cough, shortness of breath, and fatigue for 1 week. There was no hematuria or change in urine amount or color. She was prescribed cefuroxime by her primary care physician for 5 days with no improvement, resulting in change to amoxicillin and clavulanate.

The patient was pale but alert and was not in distress. Physical examinations of the chest, cardiovascular system, and abdomen were normal. Her blood pressure was 149/114 mm Hg, her heart rate was 92 beats/min, her temperature was 36.9°C, and her peripheral oxygen saturation was 100%.

Serum creatinine level on admission was 1377 μmol/L, showing a large increase versus a baseline serum creatinine at an outpatient clinic visit 5 months previously of 87 μmol/L. Her estimated glomerular filtration rate dropped from 74 to 3 mL/min over that period.

The patient was given methylprednisolone intravenously at 500 mg/day on the assumption that she may have rapidly progressive glomerulonephritis or antibiotic-induced acute interstitial nephritis or possibly rejection. She also received dialysis in preparation for renal biopsy, which was done 3 days after admission.

The patient was given methylprednisolone 500 mg/day for 3 days, and her oral prednisolone dose was increased to 50 mg/day. The patient showed no improved renal function with this regimen, and she was started on antithymocyte globulin on day 6 of admission at a dose of 1 mg/kg/day for 7 days.

A later outpatient follow-up confirmed that the patient has remained off dialysis but with very poor kidney function (serum creatinine level of 698 μmol/L, estimated glomerular filtration rate of 7 mL/min) and with persistence of her urinary proteinuria.

Here, we described a case of severe acute cellular rejection in a transplanted kidney 10 years after transplant with the unusual association of severe proteinuria but in the absence of transplant glomerulopathy, immune deposits, or C4d positivity in biopsy tests. The only explanation we could find for the presence of this heavy proteinuria was the clear ultrastructural features consistent with podocytopathy.

Although we did not know the cause of chronic kidney disease in this patient, it is unlikely that it was recurrent focal segmental glomerulosclerosis (FSGS): we did not see a late presentation of proteinuria, there was no evidence of FSGS on light microscopy, and the ultrastructural features of podocytopathy were more consistent with minimal change disease versus FSGS or diffuse mesangial sclerosis. In any case, recurrent FSGS would not explain the severe acute rejection we found in our patient.1,2 We believe that this is the first case of acute cellular rejection leading to minimal change disease.

It is now well recognized that podocyte dysfunction can result from a variety of reasons, including genetic, idiopathic, or as reactive response to a variety of insults such as mechanical stress, medications, toxins, and viral infections. The stress in our patient that led to podocytopathy may be related to the severe form of acute rejection that we observed, which is typified by severe interstitial lymphoplasmacytic infiltrates and edema.

In their extensive paper describing the advances in the biology and genetics of podocytopathies, especially with regard to kidney transplant, Barisoni and associates mainly discussed FSGS recurrence and did not mention any case of rejection causing posttransplant podocytopathy.3 Similarly, in the review of podocytopathies from Wiggins,4 no examples of acute cellular rejection being associated with podocytopathy were provided. However, it was pointed out that any injury to the glomerulus, be it immune, toxic, infectious, or ischemic, can result in podocyte injury.4

In another study that examined acute cellular rejection, the authors found that acute cellular rejection was characterized histologically by severe interstitial edema (defined as a cortical area in which at least 10 adjacent tubules were separated by intertubular spaces of more than 1 tubular diameter in width and filled with serous fluid devoid of mononuclear cells) and cellular infiltrates rich with plasma cells (defined as plasmocytes accounting for >10% of the graft infiltrating cells).6 In 826 biopsies, the investigators found that only 14 (1.7%) met those criteria. At biopsy, the patients in this group had a mean baseline serum creatinine level of 263 ± 21 μmol/L. This study also reported that rejection occurred in these patients after a median period of 187 days posttransplant, and all cases were steroid resistant.6 Graft survival was 40% at 1 year following rejection.6 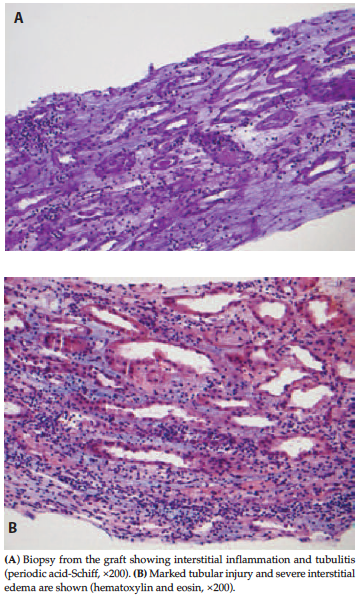 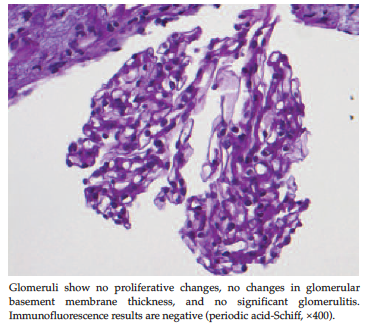