Objectives: In addition to graft dysfunction, renal transplant recipients on cyclosporine may be switched to tacrolimus to reduce its drug-related secondary clinical effects and undesirable cosmetic side effects. However, the dose level of once-daily tacrolimus for these patients has yet to be established. The objective of this prospective study was to confirm the safety of converting stable renal transplant recipients on cyclosporine to once-daily tacrolimus at a 50:1 mg ratio.

Materials and Methods: Our study enrolled 17 patients receiving cyclosporine who were observed for 3 months. Graft biopsies did not reveal any acute rejection, and the conversion ratio to once-daily tacrolimus was 50:1 mg. Dose adjustments were made to achieve a target tacrolimus trough concentration of 3 to 5 ng/mL at 2 weeks, and graft biopsies were taken after the 3-month observation period.

Conclusions: Although recipients of renal transplant can be forced to discontinue cyclosporine admi-nistration due to undesirable adverse effects, our study showed that a once-daily dose of tacrolimus may be safe when administered at a conversion ratio of 50:1.

Cyclosporine and tacrolimus are calcineurin inhibitors (CNIs) that are known to reduce acute rejection episodes and improve short-term graft survival after renal transplant as an immunosuppressant. Calcineurin inhibitors are key to maintenance immunosuppression and a major component of transplant protocols. Cyclosporine and tacrolimus have similar adverse effects, and both are associated with renal dysfunction.1 However, the frequency of dyslipidemia and gingival hyperplasia with cyclosporine is higher than that with tacrolimus, whereas the frequency of hyperglycemia with tacrolimus is higher than that with cyclosporine.2,3

However, the dose of once-daily tacrolimus for renal transplant recipients converting from cyclos-porine has not yet been established. Here, we conducted a preliminary study with an observation period of 3 months to describe the safety of con-verting stable recipients of renal transplant on cyclosporine to once-daily tacrolimus at a ratio of 50:1.

Patients
This study enrolled 17 living-donor and deceased-donor renal transplant recipients. Before conversion, all 17 recipients were being treated with cyclo-sporine, combined with methylprednisolone plus the antimetabolite mycophenolate mofetil (MMF). The following recipients were included in this study: (1) recipients with slightly impaired graft function defined as an estimated glomerular filtration rate (eGFR) of less than 35 mL/min/1.73 m2 (n = 4), (2) recipients who requested once-daily formulation of CNI (n = 10), or (3) recipients who developed cyclosporine-related adverse effects such as dyslipidemia or gingival hyperplasia (n = 3). Patients who had been followed for at least 18 months after transplant were enrolled, and those on drugs that interfere with the metabolism of tacrolimus were excluded. All participants provided written informed consent before enrollment in this study, which was approved by the Human Ethics Committee of our institution (No. 2825).

Methods
The recipients underwent graft biopsies, and those with acute cellular and antibody-mediated rejection episodes were excluded from the study. All biopsy samples were examined using light microscopy and evaluated for deposit of C4d in the peritubular capillaries using immunofluorescent staining. Acute cellular rejection and antibody-mediated rejection were histologically diagnosed according to the Banff 2007-2013 criteria.

As shown in Figure 1, recipients were switched from cyclosporine to once-daily tacrolimus at a 50:1 conversion ratio. At 2 weeks after conversion, dose adjustments were made to achieve a target tacrolimus whole blood trough concentration of 3 to 5 ng/mL. Patients were closely monitored (once or twice per 2 weeks) for 1 month after conversion to check for adverse effects due to conversion from cyclosporine to once-daily tacrolimus. Baseline doses of methylprednisolone and MMF remained unchanged in all patients. The patients also received general lifestyle guidance at the beginning of this study. After 3 months, graft biopsies were taken, and the presence of acute rejection and C4d deposition were verified. The morphologic appearance and C4d deposits in peritubular capillaries were assessed, and the frequency of acute cellular and/or antibody-mediated rejection was evaluated.

At the beginning of this study, clinical parameters were collected, which included age, sex, cause of end-stage renal disease, time to relative transplant, type of transplant (deceased/living), ABO incom-patibility, and number of HLA mismatch antigens. Blood pressure was reported as the average of 3 automated measurements taken at 3-minute intervals at baseline and 3 months after conversion. Body mass index (BMI) was also measured at baseline and 3 months after conversion. At baseline and at 1, 2, and 3 months after conversion, early-morning fasting blood samples were collected to assess biochemical parameters, which included serum creatinine, eGFR, fasting blood glucose (FBG) level, total cholesterol, triglycerides, low-density lipoprotein cholesterol (LDL), high-density lipoprotein cholesterol (HDL), hemoglobin A1c, and CNI trough concentrations. Fasting insulin was evaluated in recipients with no prior evidence of diabetes, and insulin resistance and pancreatic β-cell function were determined using the homeostasis model assessment of insulin resistance (HOMA-R = fasting insulin [mU/L] × FBG [mg/dL]/405) and the homeostasis model assessment of β-cell function (HOMA-β = 360 × fasting insulin [mU/L]/(FBG [mg/dL] - 63), respectively. Urinary albumin excretion (the ratio of spot urine con-centration of albumin to creatinine) was estimated to assess renal damage and diffuse endothelial dysfunction at baseline and at 1, 2, and 3 months after conversion. Dose adjustment or reconversion to cyclosporine was conducted when rejection or tacrolimus-related adverse effects were suspected. All occurrences of adverse events were collected for analyses.

Tacrolimus and cyclosporine concentrations were measured using electrochemiluminescence immu-noassay, and eGFR was estimated using the modified Modification of Diet in Renal Disease Study equation using the new Japanese coefficient.11 All of these procedures were performed in accordance with the Declaration of Istanbul 2008 and the Declaration of Helsinki 2000.

Pathology and C4d staining
Before conversion, there were no pathologic findings of acute cellular rejection and/or antibody-mediated rejection in the biopsy specimens. No recipients had diffuse C4d staining patterns, one patient had focal C4d staining, and 16 patients had no C4d staining. Moreover, there were no apparent pathologic findings of acute and/or chronic CNI nephrotoxicity such as tubular vacuolization, arterial nodular hyalinosis, and/or striped form fibrosis before conversion. At 3 months, allograft biopsies did not reveal any acute cellular or antibody-mediated rejection and CNI nephrotoxicity, and all patients had no diffuse C4d staining.

Lipid profile
The mean level of LDL significantly decreased from 119.2 ± 32.8 mg/dL before conversion to 119.2 ± 32.8 mg/dL at month 1, 113.4 ± 32.2 at month 2, and 111.7 ± 33.3 at month 3. On the other hand, there were no meaningful differences in total cholesterol, triglycerides, and HDL between before and 3 months after conversion (Figure 4). Lipid parameters such as LDL significantly improved after conversion even late posttransplant.

Adverse effects
Adverse effects causing discontinuation of once-daily tacrolimus or reconversion to cyclosporine were not observed, and none of the recipients experienced death or graft loss during the observation period. One patient had temporal but recurrent diarrhea after conversion and was given an antidiarrheal agent. All recipients showed good tolerance after conversion to once-daily tacrolimus.

In the present study, stable renal transplant recipients were switched from cyclosporine to once-daily tacrolimus at a ratio of 50:1. To our knowledge, no reports have been made on the dose of once-daily tacrolimus for patients converting from cyclosporine. Our study revealed that 7 recipients (41.2%) required a dose adjustment within 3 months of conversion to achieve the target tacrolimus trough concentration (4 required an increase and 3 required a decrease). However, conversion using this dosage did not induce acute cellular rejection, antibody-mediated rejection, or C4d deposition in our study participants. Furthermore, our conversion did not cause graft deterioration or tacrolimus discontinuation in this short duration. Our study demonstrated the safety of converting renal transplant recipients requiring discontinuation of cyclosporine due to undesirable adverse effects to once-daily tacrolimus at a ratio of 50:1. Such a conversion may therefore be beneficial for selected renal transplant recipients.

Low-dose tacrolimus plus MMF has been sug-gested to be a superior combination by some large randomized control studies, including the SYMPHONY study.17 In the low-dose tacrolimus group of the SYMPHONY study, a target trough concentration of 3 to 7 ng/mL was established.1 We elected a target tacrolimus trough of concentration of 3 to 5 ng/mL because the time since renal transplant was relatively long in our study (median of 47.3 mo).

No apparent morphologic findings such as CNI nephrotoxicity and/or rejection in graft pathology were shown in any of the participants before enrollment in our study. However, mismatch of body size and age between donors and recipients and graft damage without morphologic findings may cause mild impairment of graft function. In our study, renal function significantly improved after conversion. Another study (the CRAF study) also demonstrated that a switch from cyclosporine to tacrolimus resulted in improved renal function, although there was no impact on graft survival after 5 years.5 On the other hand, the CONCERTO study reported that renal function remained unchanged after conversion in stable renal transplant recipients.14 Varying changes in graft function reported by different clinical studies on CNIs may have been affected by the achieved CNI trough concentrations. Because our trough levels were lower than those of the CONCERTO study, the significantly improved renal function achieved in our study may have been due the lower tacrolimus trough levels.

One recipient in our study experienced recurrent diarrhea after conversion. Severe new-onset colitis developing shortly after the introduction of once-daily tacrolimus in renal transplant recipients has been previously reported.21 Although our patient had recurrent diarrhea, it was mild to moderate in intensity and treatable by administration of an antidiarrheal agent. However, it was not clear whether this adverse effect was caused by an infection or by the pharmacologic treatment, including the immuno-suppressive agents.

The limitations of our study might be the small sample size and short duration, as only 17 recipients could be studied. Moreover, our study was not a randomized control study. However, although this was a preliminary study, graft biopsies were performed in all of our patients before and after the study to guarantee safety.

Our study demonstrated the safety of conversion from cyclosporine to once-daily tacrolimus at a 50:1 ratio for renal transplant recipients requiring discontinuation of cyclosporine due to undesirable adverse effects. To assess its safety in the long term, a prospective well-controlled study in a larger pool of patients with a longer follow-up is needed. 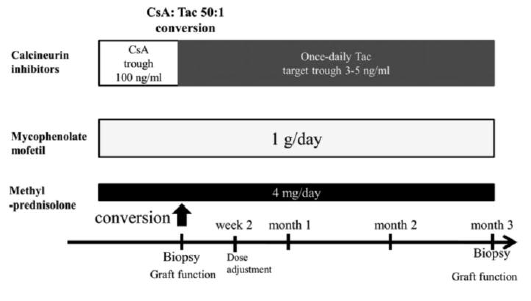 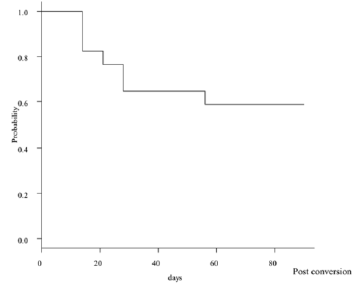 Figure 2. Probability of Freedom From Tacrolimus Dose Adjustment After Conversion 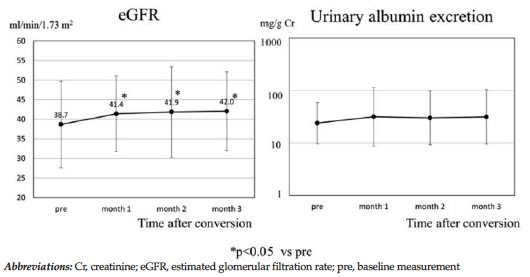 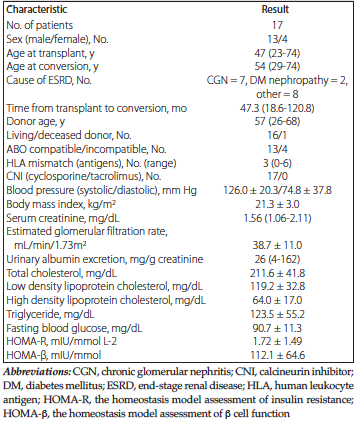