Diseases that cause significant brain dysfunction include dementia, cerebrovascular disease, and traumatic brain disease. However, in kidney trans-plant recipients, differential diagnoses include calcineurin inhibitor (CNI) encephalopathy,1 posterior reversible encephalopathy syndrome,2 posttransplant lymphoproliferative disorders,3 and progressive multifocal leukoencephalopathy.4 Delayed neurologic sequelae are known to occur after an approximately 40-day asymptomatic period following acute carbon monoxide poisoning,5 but this manifestation has not yet been reported in a kidney transplant recipient. Here, we describe a case of delayed neurologic sequelae after carbon monoxide poisoning in a kidney transplant recipient.

The patient was a 65-year-old man who had been on maintenance hemodialysis due to chronic renal failure with diabetic nephropathy as the primary disease. He received a living kidney transplant from his daughter as the donor in 2014. The patient received cyclosporine, methylprednisolone, and mycophenolate mofetil as immunosuppressive therapy, and his graft function was favorable with a serum creatine level of 0.9 mg/dL.

At 47 months after transplant, he visited another hospital after losing consciousness; follow-up showed no abnormalities. One month later, the patient developed higher brain dysfunction, including aphasia, apraxia, and gait disturbance and was admitted to our hospital for further examination and treatment. Neurologic findings were Glasgow coma scale score of E4V4M6, Hasegawa dementia rating scale-revised score of 13/30, and mini-mental state examination score of 16/30. In addition, he had dysgraphia and gait disturbance.

On day 2 after admittance, a noncontrast cranial magnetic resonance image (MRI) scan showed diffuse excessive high-signal intensities in the bilateral cerebral white matter on T2-weighted images (Figure 1), indicating nonspecific leukoencephalopathy. Because the patient was receiving cyclosporine after transplant, cyclosporine encephalopathy was first suspected. On day 4, the patient was switched from cyclosporine 120 mg/day (trough level of approximately 100 ng/mL) to tacrolimus 2 mg/day (trough level of approximately 4-7 ng/mL) and kept under observation. The patient demonstrated no improvement in symptoms. Because of suspected inflammatory neurologic diseases, such as vasculitis, steroid pulse therapy of 1 g/day was started on day 9. On day 10, the dose of tacrolimus was also decreased to 1 mg/day. However, the symptoms continued to worsen.

In the patient presented here, symptoms made it hard to differentiate from CNI encephalopathy, and we had difficulty making a diagnosis. To our knowledge, this is the first demonstration of a kidney transplant recipient who was diagnosed as having delayed neurologic sequelae after carbon monoxide poisoning. In the future, it may be necessary to consider this condition in kidney transplant recipients who develop higher brain dysfunction.

As the cause of an impairment in the cranial nervous system after kidney transplant, there are several differential diagnoses, including CNI encephalopathy, posterior reversible encephalopathy syndrome, progressive multifocal leukoenceph-alopathy, and posttransplant lymphoproliferative disorders, as well as dementia. In our patient, the initial MRI did not reveal specific findings. The high signal intensities in the cerebral white matter, compounded with the numerus differential diagnoses, resulted in difficulty with diagnosis. Because the patient was receiving immunosup-pressive therapy, including cyclosporine after kidney transplant, we first considered CNI encephalopathy due to cyclosporine. In CNI encephalopathy, nonspecific white matter lesions in the cerebral subcortical regions, especially the temporal lobe and occipital lobe, on T2-weighted images are often observed.1 We treated the patient by converting to tacrolimus and further decreasing its dose, but the symptoms did not improve. Therefore, we considered possibilities other than CNI enceph-alopathy. In this case, a follow-up noncontrast MRI revealed high signal lesions in the globus pallidus on T2-weighted images, which led us to suspect carbon monoxide poisoning. Because of this suspicion, we conducted a detailed interview and asked family members whether the patient had possibly been exposed to carbon monoxide poisoning; this led to a definitive diagnosis. In patients with higher brain dysfunction, we suggest it is necessary to follow-up with multiple cranial MRIs.

In our case of delayed neurological sequelae after carbon monoxide poisoning in a kidney transplant patient, it was difficult to make a definitive diagnosis due to the numerous differential diagnoses. However, diagnosis was confirmed and treatment was conducted after a follow-up cranial MRI was made and after detailed interview of the patient’s family. It may be necessary to consider this condition in kidney transplant recipients who develop higher brain dysfunction. 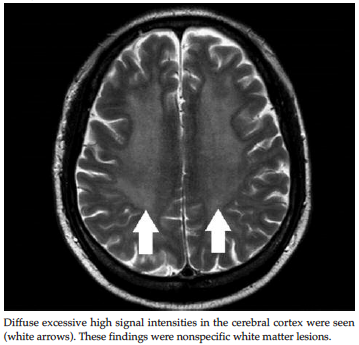 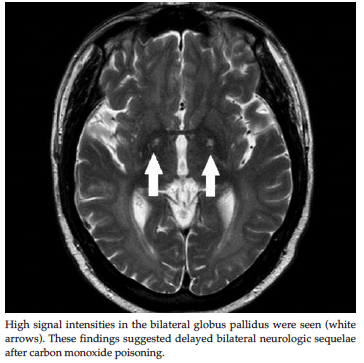 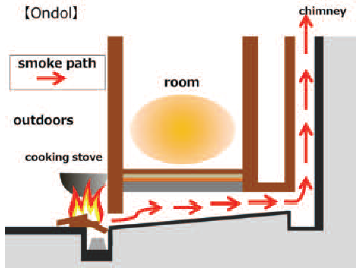