We describe a case of fusiform aneurysm of the renal artery on a background of dolichoectasia in a kidney recovered from a deceased donor. The donor, a 57-year-old female, had died of an extensive nonsurvivable subarachnoid hemorrhage. Fusiform aneurysms involving the main renal artery and its superior branch had extended into the hilum with insufficient accessible stump for safe reconstruction. Placement of a stent through an intraoperative radiologic intervention was not possible without compromising renal perfusion. Consequently, renal transplant did not proceed. Dolichoectasia is a condition associated with generalized weakness of the arterial vascular wall and may result in aneurysm formation. When the renal artery is involved, a safe reconstruction excising the aneurysmal segment may be considered before transplant of the kidney.

Dolichoectasia is a disease that causes significant weakening of the arterial vessel walls, which leads to elongation and distention of the arterial wall.1 This condition is associated with male sex, hypertension, old age, smoking, diabetes, and other risk factors associated with cardiovascular disease.1 Its pre­valence is estimated to be between 0.1% and 18%, and it is mostly described in patients with cerebrovascular disease.1 The spectrum of the disease can extend from mild ectasia of the arterial wall to full-blown fusiform aneurysms.1 We describe a case of fusiform aneurysm of the renal artery in a kidney obtained from a deceased brain donor with a known history of dolichoectasia.

A 57-year-old female patient with a background of hypertension was diagnosed as brain dead following a cerebrovascular accident. A computed tomography scan showed extensive nonsurvivable subarachnoid hemorrhage with nondilated intra- or extracerebral vessels. The irreversibility of the neurologic injury and the futility of further treatment were discussed with the family, and consent for organ donation was sought. The patient was known to have dolic­hoectasia and had previously undergone a successful stenting of the right renal artery.

During organ recovery, mild atherosclerosis of the aorta was noticed. The right kidney with renal artery stent was not considered for transplant. We received the left kidney, which was described as being of normal size and with good flush. A fusiform aneurysm of approximately 2 cm diameter was observed, which involved the main trunk of the left renal artery and its cranial branch and which extended into the hilum (Figure 1). There was insufficient accessible stump distally to conduct a safe reconstruction.

An intraoperative vascular intervention with internal covered stent was considered but deemed not a suitable option due to the anatomic disposition of the aneurysm. The kidney was deemed not suitable for transplant because of increased risk of renal artery aneurysm (RAA) rupture, hemorrhage, and graft failure after transplant.

Renal transplant is the best treatment option for patients with end-stage renal failure.2 The shortage of donor organs for transplant is the main limiting factor for renal transplant, which has resulted in a mortality of 9% for patients on renal transplant wait lists in the United Kingdom.3 To expand the donor pool, many centers have adopted a strategy of utilizing kidneys from extended criteria donors,2 high-risk donors, and kidneys with anatomic anomalies and injuries. As such, strategies have allowed for the inclusion of patients with vascular comorbidities for donation; however, donor organ suitability is assessed on an individual basis, balancing the benefits of implantation against the risks of graft failure.

Primary RAAs are uncommon, contributing to 1% of all aneurysms and 15% to 22% of visceral aneurysms.4 The estimated incidence of these complications is 0.09% in the general population, 0.1% to 2.5% in angiographic series, and up to 9.7% in autopsy series.4 Most RAAs are treated with radiologic interventions, with some requiring surgical intervention. In rare instances, a nephrectomy may also be warranted when catastrophic hemorrhage is anticipated from a large aneurysm and reconstruction is not feasible. There is a paucity of published reports regarding outcomes of recipients of renal allografts after RAA repair.

Olakkengil and associates reported 6 cases in which transplant was carried out with renal allografts with RAAs.5 All six patients had saccular aneurysms with sizes ranging from 0.5 to 5.3 cm. There were 4 kidneys retrieved from living donors and 2 kidneys from deceased donors.5 In most cases, the aneurysm was excised with primary end-to-end reconstruction ex vivo.5 There were 2 graft rejections, with 1 graft loss secondary to recurrence of primary renal disease. Three patients had no complications (follow-up ranged from 2 mo to 8 y).5

Nahas and associates reported a series of 11 patients who received kidneys from donors with renal artery lesions, with 3 having RAAs.6 All of the included cases had arterial reconstruction ex vivo before implantation. Six patients had postoperative complications, including 3 posttransplant graft losses.6

Kadotani and associates reviewed 31 cases of renovascular reconstruction, including 2 cases with RAA where arterial reconstruction was performed.7 In both cases, the aneurysms were small (< 1 cm), located at the proximal end renal branch, of the saccular type, and without evidence of atherosclerosis.7 No postoperative complications were reported.

In another study, Jung and associates reported 2 patients who had flank pain and hematuria secondary to saccular RAAs measuring 2 cm and 2.4 cm, respectively.8 Both patients opted to altruistically donate their kidneys versus ex vivo repair and autotransplant.8 These kidneys were subsequently transplanted after ex vivo excision of aneurysm and reconstruction of the renal artery.

Other authors have also reported similar approaches to RAAs in the context of deceased-donor and living-donor renal transplant (see Table 1).9-13

Techniques described to repair RAAs include simple excision and end-to-end anastomosis, vein patch, Y graft, and a pantaloon-type side-to-side anastomosis before transplant. Studies cited in Table 1 that referred to the management of saccular RAAs reported mostly positive outcomes overall. Evidence for treatment of fusiform RAAs (in association with dolichoectasia) has only been shown in nont­ransplant patients.

Most reported cases have described saccular aneurysms in the renal artery. Henke and associates reviewed 168 patients (107 women, 61 men) with 252 RAAs. From 185 RAAs with adequate imaging, 79% were saccular and 21% were fusiform aneurysms.14 They found fusiform aneurysms to be associated with advanced fibrodysplasia of the renal artery media.14 Some of these may have been doli­choectasia, although they were not identified as such.

In our case, the aneurysm affected the main trunk of the renal artery and its superior branch and extended into the hilum, rendering it unsuitable for surgical reconstruction or radiologic intervention. For such cases, excision of all visibly deceased sections of artery is preferred, with use of a recipient or third-party segment of hypogastric artery to replace the abnormal segment or alternatively the use of polytetrafluoroethylene grafts.15 However, this is commonly practiced in donor patients with multiple renal arteries but is not well established in donors with RAA where the artery may be compromised. 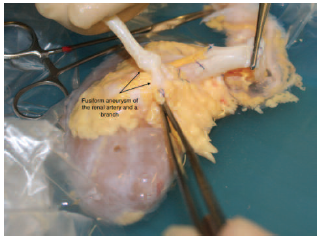 Figure 1. Donor Left Kidney Showing a Fusiform Aneurysm of the Main Renal Artery and Its Upper Branch and Extending Into the Hilum of the Kidney