Conclusions: Pancreas transplant can be performed with excellent and equivalent outcomes in patients with type 1 and carefully selected type 2 diabetes mellitus. Patients with type 2 disease are more likely to have posttransplant pancreatitis and BK virus nephropathy, affecting the net benefit for transplant.

Pancreas transplant (PTX) is the only therapeutic modality that can restore the normal euglycemic state for patients with insulin-dependent diabetes. Pancreas transplant was first successfully performed in 1966.1,2 Since that time, PTX has been shown to improve quality of life, ameliorate secondary diabetic complications, and improve survival for patients compared with remaining on wait lists or undergoing kidney transplant alone.1,3-5 The 2011 Annual Report from the Scientific Registry of Transplant Recipients3 described successful short- and long-term graft survival after simultaneous pancreas-kidney (SPK), pancreas after kidney (PAK), and pancreas alone (PTA) transplant procedures. Traditionally, PTX has been performed for recipients with type 1 diabetes mellitus. However, many investigators have demon­strated that PTX may be extended to carefully selected patients with type 2 diabetes mellitus and still provide a significant survival advantage. Patient and graft survival rates after PTX for type 1 or type 2 diabetes mellitus have been shown to be clinically similar.3,6-10

Improvements in surgical techniques and immunosuppression regimens have resulted in fewer complications after PTX; however, opportunistic infections remain a source of continued morbidity. BK virus nephropathy (BKVN) has long been recognized as an important determinant of outcomes after renal transplant and affects nearly 8% of recipients.11,12 Recently, BKVN has also been recognized as an important factor in outcomes after PTX and has an posttransplant incidence reported to be as high as 20%.13 Although the role that immuno­suppression (induction and maintenance) plays in BK DNA viremia and BKVN has been established, little data exist concerning the risk of BKVN after PTX for patients with type 1 and type 2 insulin-dependent diabetes mellitus.

Study population
We conducted a retrospective analysis of all adult pancreas transplants (N = 214) performed between April 4, 2000 and May 17, 2012. Of these patients, 112 patients (91 SPK, 19 PAK, 2 PTA) had documented pretransplant C-peptide testing and were included in the final analysis. Patients were followed until allograft failure, patient mortality, or end of follow-up. The overall patient cohort was grouped to allow comparisons between patients with (n = 49) and without (n = 63) measurable C-peptide levels. C-peptide measurements were made with standard enzyme-linked immunosorbent assay methodology and reported as undetectable when values were below the lowest linearity value. Patients with measurable C-peptide (DM2 group) had be on insulin, have a body mass index of less than 28 kg/m2, and have an insulin requirement of < 1 U/kg/day. Active smokers, patients with significant peripheral vascular disease, and patients with major cardiac disease were excluded. A multidisciplinary approach was used to assess the patient’s medical, psychosocial, and functional fitness to withstand the transplant and immunosuppression. The study was approved by our institutional review board.

Statistical analyses
The goals of this study were to examine com­plications, outcomes, and incidence of BKNV in patients without measureable C-peptide and with measurable C-peptide after PTX. Primary outcomes of interest were acute renal allograft rejection, acute pancreas allograft rejection, pancreas allograft failure, and patient mortality in patients with and without measureable C-peptide before PTX. Patients who had PTX (N = 214) were divided into 2 cohorts based on undetectable (n = 63) and detectable (n = 49) pre-PTX C-peptide measurements. A univariate analysis was conducted to compare baseline characteristics and post-PTX complications and outcomes. Group comparisons were performed using chi-square or Fisher 2-sided exact tests for categorical data and independent t tests for continuous data. Comparisons of pancreas allograft survival time between cohorts were performed using Kaplan-Meier survival analysis.

Transplant and posttransplant characteristics
Table 2 demonstrates the results of the univariate analysis of donor, transplant, and posttransplant characteristics between patients with DM1 and DM2. There were no differences observed between cohorts with respect to donor factors, cold and warm ischemic times, mean post-PTX serum glucose level, long-term annual C-peptide levels (that is, > 2 years post-PTX), annual HbA1c during follow-up (years 1-5), or mean HbA1c. Cohorts also showed no differences regarding changes in weight during follow-up or in serum lipase at 1 month post-PTX. Having DM2 before PTX was associated with higher post-PTX C-peptide levels at year 1 (5.2 vs 3.4 ng/mL; P = .03) and year 2 (4.9 vs 2.3 ng/mL; P = .03), higher maximum lipase level (101 vs 48 IU/L; P = .04), and a trend toward higher lipase at 7 days after PTX.

Posttransplant complications
Table 3 demonstrates the results of the univariate analysis of complications post-PTX between patients with DM1 and DM2. There were no differences observed between cohorts with respect to early graft dysfunction and medical or surgical complications (initial insulin use after PTX, initial hospitalization, return to operating room, return to operating room for bleeding, pancreatic leak, small bowel ob­struction, and other or total surgical complications). There were no differences between cohorts with respect to wound infections or intra-abdominal abscesses. There were no differences between cohorts regarding gastro­intestinal complications (post-PTX symptomatic gastroparesis, gastritis/peptic ulcer disease, peptic ulcer, esophagitis, diarrhea, episodes of dehydration, or gastrointestinal com­plications from medications). However, patients with DM2 who had PTX had significantly greater incidence of BKVN than patients with DM1 (12% vs 0; P = .006).

Outcomes and allograft survival over time
Table 4 demonstrates the results of the univariate analysis of outcomes in patients with DM1 and DM2 after PTX. There were no significant differences with respect to acute kidney allograft rejection (9.5% vs 16.3%; P = .389), overall acute rejection (15.5% vs 32.7%; P = .177), pancreas allograft loss (11.1% vs 8.2%; P = .753), or patient mortality (0% vs 0%). There was a trend toward an increased incidence of pancreas allograft rejection in the DM2 group compared with the DM1 group (7.9% vs 18.4%; P = .086). Figure 1 presents the Kaplan-Meier analysis of allograft survival in our patients with DM1 and DM2 who received PTX procedures over a 12-year period. In our 12-year patient cohort, no differences in pancreas allograft survival were shown between PTX recipients without and with measureable pre-PTX C-peptide levels (P = .20).

In our analyses of 112 PTX recipients, we compared 63 recipients without detectable pre-PTX C-peptide (DM1) versus 49 recipients with detectable pre-PTX C-peptide (DM2) over a mean follow-up of 8 ± 4.2 years. Patients with DM1 and DM2 had similar transplant and post-PTX courses. There were no differences in post-PTX serum glucose, C-peptide after year 2, or HbA1c throughout the follow-up period. Complications after PTX in both cohorts were not different with respect to graft dysfunction, surgical complications, wound infections, intra-abdominal abscesses, or gastrointestinal com­plications. Outcome and survival data were similar between cohorts with respect to kidney allograft rejection, pancreas graft loss, and patient mortality. There were no differences in pancreas allograft survival in patients who had transplant procedures over a 12-year period as shown by Kaplan-Meier analysis. However, patients without detectable C-peptide and PTX had no incidences of BKNV compared with 12% in patients with detectable C-peptide, which reached significance. There was a trend toward higher pancreas allograft rejection in the DM2 versus the DM1 cohort, although this did not reach significance.

A small number of SPK transplants are performed in recipients with DM2. In their analyses of the United Network for Organ Sharing database, Sampaio and associates found that 8.6% of patients who underwent SPK transplant had DM2. Most of the literature has shown equivalent outcomes of SPK in patients with DM1 and DM2.6,7,8,19,20 In a single-center retrospective study, Light and colleagues demonstrated that actuarial 10-year PTX patient and graft survival rates were equivalent for patients with DM1 and DM2. The authors also reported that recipient ethnicity had no bearing on outcomes after PTX.6,7 The results of our study are consistent with previous reports that have detailed complications of PTX for patients with DM2. Singh and associates examined differences in complications and outcomes after SPK for patients with DM1 and DM2 over a 40-month follow-up. Both cohorts had similar complications, but they also reported that patient survival was decreased in the DM1 group.10 A study of the United Network for Organ Sharing database found that, although rates of delayed graft function and primary nonfunction of kidneys were higher in the DM2 cohort, after adjustment of risk factors, SPK recipients with DM2 were not at increased risk of death, kidney failure, or pancreas failure compared with recipients with DM1.19 Our study, although a single-center study, included a high percentage of patients with DM2. We also had the advantage of having a standardizing immunosuppression regimen and a long follow-up. We were able to show equivalent posttransplant outcomes for DM1 and carefully selected DM2 recipients.

Our overall incidence of BKVN was 5.4% and similar to that reported by Ison and associates in their examination of 205 SPK recipients.13 The authors also reported no difference in BKNV incidence among those treated with different depleting antibody induction agents (alemtuzumab or thymoglobulin). Akpinar and associates examined 178 SPK recipients utilizing an immunosuppression regimen similar to ours and reported a low incidence of BKNV (2 pa­tients or 1.1%).21 Mindlova and associates examined 183 SPK recipients and found a 3.8% incidence of urine and serum BK virus positivity, with incidence of BKVN of 1.6% (3 patients).22 Incidence of BKVN after PTX in patients with DM1 and DM2 has not been reported. Interestingly, in our study, PTX for DM2 was associated with all cases of BKVN compared with DM1 (12% vs 0; P = .006) despite equivalent immunosuppression. We pos­tulated that the differences in the incidence of reported BKVN after PTX might be related to differences in patient cohorts. It may also be related to the higher rate of pancreatitis and a trend toward a higher rate of rejection in the DM2 group, leading us keep the net immunosuppression of these patients higher. Despite a significantly higher incidence of BKNV, PTX graft survival in both cohorts was overall similar according to Kaplan-Meier analysis.

Our study has several limitations. First, our retrospective analysis only considered a diagnosis of BKNV if it was proven by biopsy. Conducting biopsies for PTX patients with BK viruria/viremia or graft dysfunction may have altered our reported incidence. Second, of 214 PTX recipients, 102 did not have pre-PTX C-peptide recorded (outside laboratory). Exclusion of these additional PTX recipients may have skewed observed complications and/or outcome data. Third, a larger, prospective study may have allowed further control of risk factors between cohorts and provided additional strength. We reported that patients with measurable C-peptide had an increased incidence of PTX graft rejection, although this did not reach statistical significance. Future work with an increased cohort size or better characterization of PTX recipients for whom C-peptide data were not recorded may allow clarity concerning association between PTX rejection and BKVN. Rejection-associated immunosup­pression may have predisposed the DM2 cohort to higher risk of BKNV. Finally, studies by Tanaka and associates have suggested that diabetes may impair native and acquired immunity.23 Prospective analyses that include baseline and post-PTX immune cell functional may allow further understanding of possible mechanisms in the differential rates of rejection and BKVN in patients with DM2 after PTX. 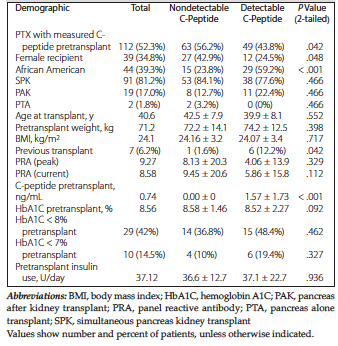 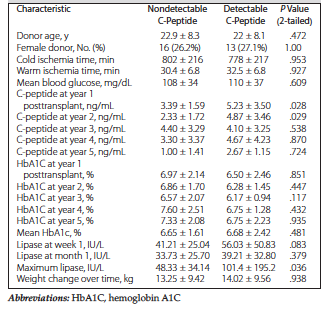 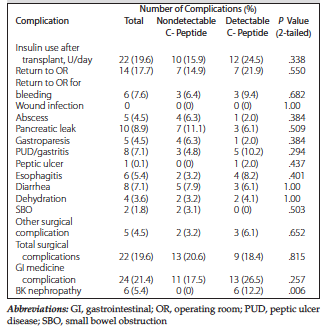 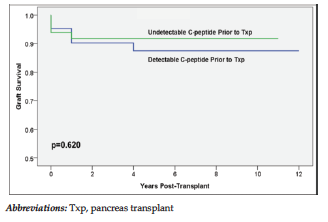 Figure 1. Pancreas Graft Survival for Patients Based on C-Peptide Levels Before Transplant