Objectives: Scarcity of liver grafts has led to the use of marginal donors, consequently increasing the number of complications posttransplant. To prevent this situation, several indicators have been developed. However, important differences remain among countries. Here, we compared an early-risk liver transplant indicator based on the Spanish Liver Transplant Registry, called the Graft Risk Index, versus the US donor risk index and the Eurotransplant donor risk index.

Materials and Methods: The new indicator was based on prospectively collected data from 600 adult liver transplants performed in our center. We considered 2 events to compare the indexes: graft survival and rejection-free graft survival, with Cox proportional regression for analyses. Power to predict graft survival was evaluated by calculating the receiver operating characteristic area under the curve.

Conclusions: Neither the US donor risk index nor the Eurotransplant donor risk index was valid for our Spanish liver donation and transplant program. Therefore, an indicator to predict posttransplant graft survival that is adapted to our environment is necessary. This national Graft Risk Index can be a useful tool to optimize donor-recipient matching.

In Spain, more than 1000 transplant procedures have been performed each year in the past decade; more than half of these patients will have at least 1 significant complication during their first year posttransplant.1 Specifically, in the immediate postoperative period, they are admitted to the intensive care unit (ICU) and may have systemic complications, including respiratory, cardiovascular, renal, and hematologic, as well as graft complications (technical and nontechnical), including primary graft failure, arterial or portal thrombosis, and rejection. These complications can lead to longer ICU and hospital stays and can result, in many cases, in graft failure (retransplant) or even patient death.

There are important differences among organ donation and transplant programs in different countries and organizations in terms of both donor characteristics and transplant results. These differences are more striking regarding donor age and ethnicity, number of donors after brain death versus donors after cardiac death, causes of brain death, controlled hepatic bipartition, and other factors. For example, for the French donation program, Winter and associates have shown that DRI and ET-DRI were not useful.13

All of the above factors indicate that donors and recipients can differ between countries and/or regions; therefore, a region-specific scoring system that could be used for liver selection and allocation would be appropriate. The Spanish Liver Transplant Registry (RETH; for its acronym in Spanish) was created with the cooperation of professional teams incorporated in the Spanish Liver Transplantation Society and the Spanish National Transplant Organization. The RETH records the experiences of liver transplant in Spain; the database contains structured data of all liver transplants performed in the country, thus serving as a knowledge repository of our own experience.

In this study, our main objective was to determine graft quality when we compared the DRI, the ET-DRI, and our region-specific Graft Risk Index (GRI).14 We used data from 22 846 liver transplants from RETH, which included liver transplant procedures done at our center. The GRI, a new early risk indicator in liver transplant, was based on outcomes recorded in RETH. This Spanish-specific indicator, which combines donor- and recipient-related factors, could facilitate patient-specific decision-making in organ selection and allocation.

The description of the new indicator was based on data collected from the annual report from RETH,15 which describes donor characteristics and liver transplant results in Spain. In particular, the structured data include 22 846 liver transplants, which were performed in 24 transplant centers from 1984 to 2016. This report is in the public domain and is available online.

For validation of described indicators, we included prospectively collected data of 600 adult liver transplants (recipients were older than 15 years) performed consecutively in our center. The study complied with Organic Law 15/1999 on Personal Data Protection. It was also approved by the Aragon ethics committee (CodeCEICA PI18/0097) on April 24, 2018.

Based on the Cox regression equation itself, ln (λt) = a + b1x1 + b2x2 + … + bnxn, an indicator can be defined as the exponential (inverse logarithm) of a linear risk score. By grouping variables with statistically significant differences for multivariate analysis, 2 GRIs can be defined, one overall (global) and one early (< 1 month).

The Hosmer-Lemeshow goodness of fit test (P < .05) was used to evaluate model fit. We then obtained the values used to generate the logistic regression curve: regression coefficients (β0 and β1) with their corresponding standard errors, the Wald statistic, and odds ratio and confidence intervals.

The accuracy of DRI, ET-DRI, and GRI to predict graft survival was assessed using the area under the curve in a receiver operating characteristic curve analysis, where 1 represents perfect discrimination and 0.5 represents discrimination not above chance level.

To describe and calculate the GRI, global and early GRIs were obtained using Cox logistic regression analysis on global graft survival data from the RETH (Table 1). Table 1 shows an example of a global GRI with risk 1 and an example of maximum risk (GRI = 81.04); the examples shown are accompanied by DRI and ET-DRI scores.

To validate new indicators besides DRI and ET-DRI, data from 600 adult liver transplants performed at our center were included. Validation series data are described in Tables 2, 3, and 4.

With reference to the logistic function of the GRI, the Hosmer-Lemeshow test revealed that the probabilities observed were similar to those expected for the 3 indicators concerned: DRI (P = .20), ET-DRI (P = .25), global GRI (P = .20), and early GRI (P = .28). Figure 1 shows the logistic equation curve of the early GRI, together with the values observed in the early GRI intervals. An early GRI value of 1 corresponded to a probability of graft failure (5.07%), and each point of early GRI increase indicated that the probability of having a graft failure was multiplied by 2.06 (95% CI, 1.57-2.96).

Regarding early survival, risk group stratification of the DRI and ET-DRI values did not show significant differences in early graft survival between these indicators and global GRI, except for the group with extreme values. Only early GRI showed better survival discrimination, with an observation of a progressive decrease in survival in which an early GRI value ≥ 3 indicated a probability of graft survival at 1 month of 68.0% (95% CI, 46.2-82.5) and a significant increase in risk compared with the standard group (HR = 10.15, 95% CI, 3.91-26.32; P < .001) (Table 6). With regard to global survival, all indexes showed differences between extreme groups, with GRI having the best discrimination.

Recently, benchmark16 indicators have been described regarding outcomes after liver transplant, including surgical outcomes, patient and graft survival, patient care in the ICU, complications, length of stay, and other factors.

Regarding length of stay in the ICU, Pedersen and associates,17 in a study of factors associated with a longer stay in the ICU, found that pretransplant MELD was the most potent predictor of prolonged ICU stay. Stratigopoulou and colleagues18 confirmed that MELD and transplant duration are independent predictors of prolonged ICU stay. However, Rana and associates19 described a new index to predict the length of posttransplant hospitalization; of 22 independent risk factors associated with longer hospital stay, the 2 most significant were shown to be previous admission of the recipient to the ICU (odds ratio of 1.75; 95% CI, 1.58-1.95) and previous transplant (odds ratio of 1.60; 95% CI, 1.47-1.75).

Regarding morbidity and mortality in the ICU, preventing complications is a key factor in the evolution of these patients and begins with appropriate donor-recipient matching. Traditional indicators used to assess the prognosis of cirrhosis (Child-Pugh) or mortality on the liver transplant wait list (MELD) are not valid to predict posttransplant patient survival. Recent indicators based on neural networks are complex, based on limited experience, have low generalization capacity, and are difficult to extrapolate to daily clinical practice. Finally, the external validations of some indicators (DRI, MELD, vs D-MELD; SOFT, DRI, vs ET-DRI; and DRI vs SOFT)20 could not be confirmed when applied in different scenarios from the one originally described, such as in our study. The latter is likely because of the large differences between countries and regions regarding donor population characteristics and the donation-transplant process and less to recipient characteristics.

With regard to indicators, donor-related variables may be associated with specific graft characteristics and general characteristics of the “donor per se.” Most described indicators share some common variables, such as age and cause of brain death, among others. However, some indicators are those whose use is not based on a solid scientific basis, such as height. Although steatosis is a main determinant of posttransplant liver function (especially in the first year), as described by Kulik and associates21 in a recent study, it is striking that it has not been included in any of the indicators described.

Donor age has been included in many indicators.22 However, in RETH, it is an independent risk factor regarding overall graft survival but not with respect to short-term graft survival (< 1 mo), which has been previously concurred by an international group23 and by our group.24,25

Variables associated with the donor per se should be included as indicators of graft survival. Some of these variables have been grouped internationally under the concept of expanded criteria donors. These include drug abuse, tumors, infections, hepatitis B/C, age > 65 years, and high transaminase/bilirubin levels.

Regarding recipient-related variables, we have already stated how the previous clinical condition of the recipient could affect length of stay in the ICU (these include high MELD score and United Network for Organ Sharing status). Allocating an organ to the most appropriate recipient is one of the most difficult decisions. We agree with Feng and associates5 that an ideal graft is homogeneous, allowing allocation of an optimal organ to anyone; however, nonideal grafts are heterogeneous, covering a wide spectrum of risk. In the latter case, allocating a suboptimal organ to a recipient with high MELD,28,29 specific conditions,30 or conditions with higher wait list mortality could interfere with the risk of patient survival against wait list mortality.31 Therefore, an indicator should include this aspect in its design.

The present study has some limitations. Although the indicator described is based on a national registry of more than 22 000 transplants, it has been validated with a limited series of a single center. These indexes aim to predict and simplify complex situations depending on many factors and, in many cases, simplify quantitative variables (eg, time of cardiac arrest, cold ischemia time) to categorical ones.

In the future, decision-making should be based on complex artificial neural networks32 that will eventually replace medical doctors. However, until then, we will continue the search for tools that decrease errors in our donor-recipient matching decisions.

We found that neither DRI nor ET-DRI adequately predicted graft risks in our setting. Therefore, it is necessary to have an indicator to predict post-transplant graft survival that is adapted to the environment in which it will be used. A national GRI can be a useful tool to optimize donor-recipient matching. Therefore, a national study would allow delineation of indicators and a more extensive validation to be performed. 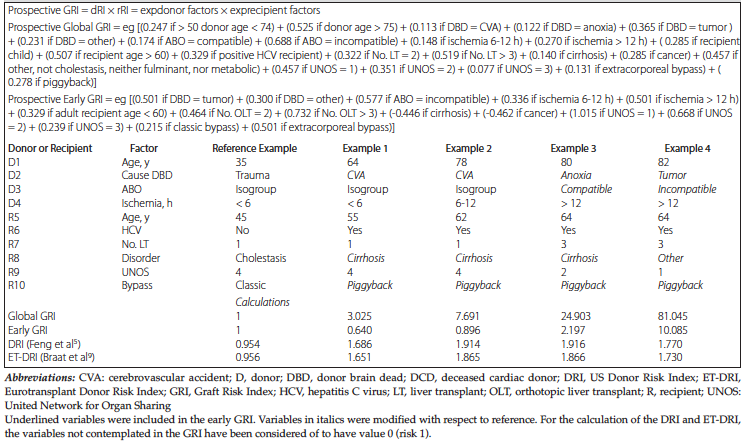 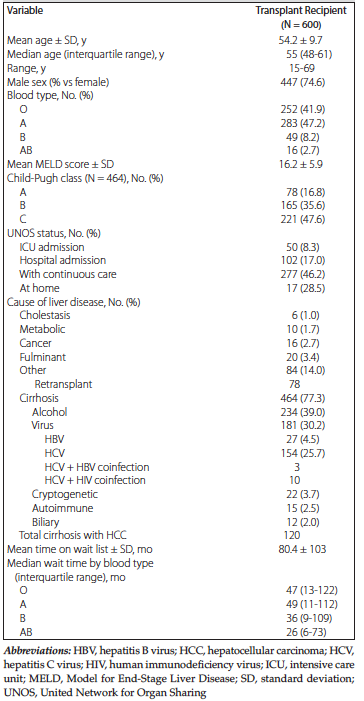 Table 2. Main Characteristics of the Cohort 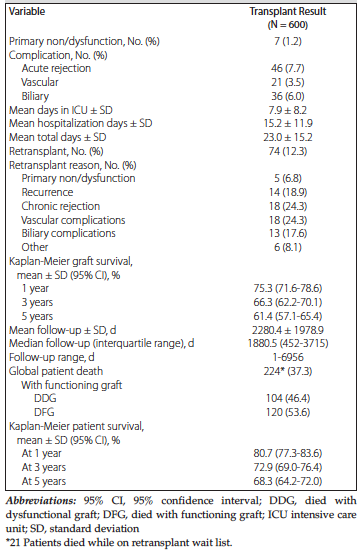 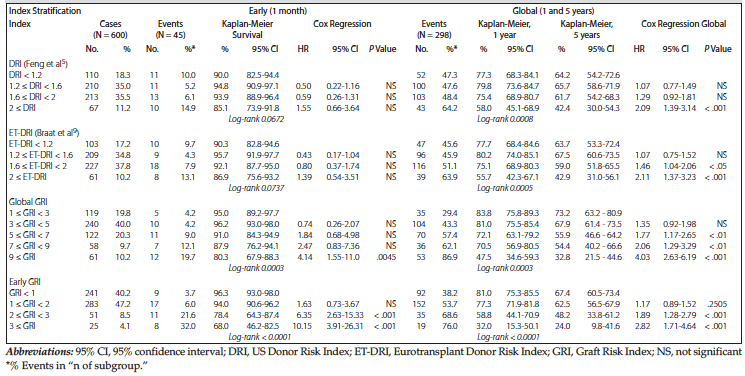 Table 6. Adjusted 1-Month and 1- to 5-Year Graft Survival and Hazard Ratio According to Index Stratification 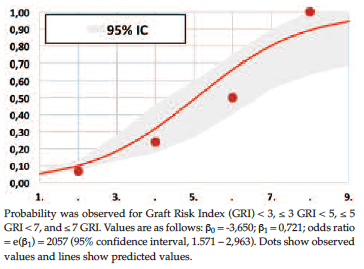 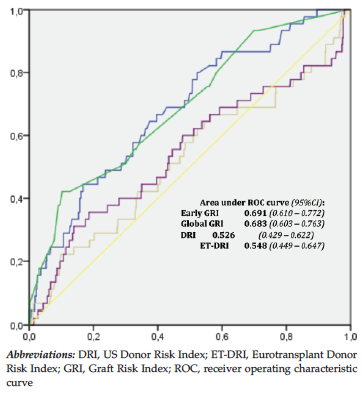