Materials and Methods: Between March 2014 and June 2018, 65 patients underwent liver transplant at our institution, with 13 (20%) having portal vein thrombosis preoperatively. The characteristics and management of these patients were reviewed retrospectively, and outcomes were compared with those of patients without portal vein thrombosis.

Portal vein thrombosis (PVT) is not uncommon in patients with liver cirrhosis, with incidences as high as 16% among patients with liver cirrhosis.1-3 Until recently, preexisting PVT was considered as a contraindication for liver transplant (LT) due to difficulties in restoration of adequate portal vein (PV) inflow to the allograft, which is mandatory for successful LT. However, recent advances in surgical techniques, since the first successful case by Shaw and associates in 1985,4 have made it possible to overcome PVT during LT. Various surgical options according to the extent of thrombosis, ranging from thromboendovenectomy to multivisceral transplant, are now available, and PVT is no longer considered as a contraindication for LT. Here, we introduce our experiences and outcomes of LT in patients with PVT.

Patients
From March 2014 to June 2018, 65 patients received LT at our institution. Among these patients, 31 patients (48%) received deceased-donor and 34 patients (52%) received related living-donor LT. Of these patients, preexisting PVT was identified in 13 patients (20%). Portal vein thrombosis was diagnosed using imaging work-up, including dynamic multidetector computed tomography and magnetic resonance imaging, and intraoperative findings. Portal vein thrombosis was classified into 4 grades according to the Yerdel classification system5: 7 patients (53.8%) had grade 1, 4 patients (30.8%) had grade 2, 1 patient (7.7%) had grade 3, and 1 patient (7.7%) had grade 4. There were no patients who could not receive LT due to PVT. All patients were categorized into 2 groups according to the presence of preexisting PVT: a PVT group and a non-PVT group. Surgical outcomes were compared between the 2 groups. Medical records were reviewed retrospectively after approval by the Institution Review Board of our center (approval No. 2018-11-019).

Management of portal vein thrombosis
For management of PVT during LT, eversion thrombectomy was performed initially for all patients with PVT after recipient total hepatectomy. If large portosystemic collateral veins, such as the splenorenal shunt and large coronary vein, were present, these collateral veins were dissected and clamped temporarily for checking portal inflow.

If sufficient portal flow was identified, simple anastomosis between the recipient PV and graft PV was performed, and collateral veins were ligated for sufficient portal inflow and to prevent portal flow “steal” (shunting). In cases of insufficient portal inflow after thrombectomy and clamping of collateral veins, different options, such as jump graft from the superior mesenteric vein (SMV), renoportal anastomosis, and varicoportal anastomosis, were considered based on the extent of thrombus and the presence of useful collateral vessels. For the interpositional graft, an iliac vein graft from a brain-dead donor was used for patients who received deceased-donor LT. If a useful vein graft was not available, a bovine pericardial patch graft was used. Anticoagulation therapy for prevention of PV thrombus was not performed routinely after surgery. Postoperative Doppler ultrasonography was per-formed every other day to check the patency of blood flow to the liver graft.

Statistical analyses
Statistical analysis was performed with IBM SPSS version 18.0 (SPSS Inc., Chicago, IL, USA) to compare outcomes between the PVT group and the non-PVT group. The Mann-Whitney U test was used to evaluate differences in continuous variables. Categorical variables were compared by Fisher exact test. Cumulative survival curves were analyzed with the use of the Kaplan-Meier method, and significance was determined by the log-rank test.

Surgical procedures according to Yerdel class-ification and outcomes
Surgical procedures according to Yerdel classification and outcomes are shown in Table 1. Eversion thrombectomy (Figure 1A) and collateral vein ligation were performed in most patients with Yerdel grades from 1 to 3, except for 1 patient with grade 2 classification. Jump graft from the SMV using bovine pericardial patch (Figure 1B) was used for restoration of portal inflow in this patient because of inadequate portal inflow after thrombectomy (Figure 1C). For the patient with grade 4 PVT, diffuse portomesenteric thrombosis was shown, and a renoportal anas-tomosis using the iliac vein graft from the brain-dead donor was performed (Figure 1, D-F). In a follow-up computed tomography scan, PV stenosis was observed in only 1 patient; this patient required a jump graft from the SMV using a bovine pericardial patch graft. Consequently, a PV stent was inserted to relieve stenosis. Recurrent PVT was not observed in any patient during follow-up, and the patency of portal flow was well-preserved at the most recent follow-up.

Comparison of demographics and clinical features between patients with and without portal vein thrombosis
Preoperative demographics of patients with and without PVT are shown in Table 2. Alcohol drinking rate and mean Model for End-Stage Liver Disease score were higher in the non-PVT group than in the PVT group. Other demographics and clinical features were not significantly different between groups. In the PVT group, mean recipient age was 56.1 years and 9 of 13 patients (69.2%) were male. Child-Pugh classification were as follows: 3 patients (23.1%) with class A, 4 patients (30.8%) with class B, and 6 patients (46.2%) with class C. In the PVT group, none of the patients was diagnosed with hepatorenal syndrome and hepatic encephalopathy grade 3/4 before LT.

Comparison of surgical outcomes between patients with and without portal vein thrombosis
Surgical outcomes for both groups are shown in Table 4. We observed no perioperative mortality in the PVT group. In both groups, the rate of postoperative complications was 23.1%. Reoperation was performed in 4 patients (3 due to postoperative bleeding, 1 due to PVT) in the non-PVT group and in 1 patient (due to bile leakage from graft surface) in the PVT group. The incidence rates of bile leakage and biliary stricture were slightly higher in the PVT group, but differences between groups were not statistically significant (3.8% vs 15.4%; P = .176 and 15.4% vs 30.8%; P = .237). We also observed no significant differences in vascular complications between groups. Patient survival was similar between groups (Figure 2).

Portal vein thrombosis is a well-known complication in patients with liver cirrhosis, with rates ranging from 2% to 26%.1-3,6 The cause is not completely understood but presumed to be the result of changes in liver cirrhosis, increased portal pressure, endothelial injury, or coagulation changes.7-11 Yerdel and associates classified PVT in terms of the extent of thrombosis and reported that patients with high-grade PVT had more difficulties during surgery, more postoperative morbidity, and higher mortality rates after LT.5 In the past, PVT was considered as a contraindication for LT due to the complexity of the surgical technique and the increased risk of other complications such as vascular thrombosis, postoperative pancreatitis, sepsis, and renal failure, as described in some studies.5,12,13 However, with developments in treatment of patients with PVT, PVT is no longer a contraindication for LT, and many groups have reported favorable outcomes for LT in patients with PVT.14-19

In our study group, most patients who had pre-existing PVT were diagnosed by preoperative images, with the status of PVT then confirmed intraoperatively. Eversion thrombectomy was performed for all PVT patients as a first treatment option, whether collateral veins existed or not. If large collateral veins were identified, collateral veins were dissected and ligated to maintain adequate portal inflow and prevent portal flow steal, which can cause recurrent PVT and graft dysfunction after LT. Fortunately, we obtained adequate portal flow in most patients (11/13, 84.6%) and prevented recurrent PVT and portal flow steal with this technique, as reported also by others.15,20,21 Usually, with grade 1 and grade 2 PVT, which are confined to the PV trunk, thrombectomy and anastomosis using the original PV are recommended as a first option to gain adequate portal flow because a large-sized anastomosis of the PV can be made for sufficient portal flow.11,14-16,18 In addition, ligation of portosystemic collateral veins may also be considered to prevent PV steal syndrome.6,14

In 2 patients (with PVT grades 2 and 4), we failed to obtain adequate portal inflow despite throm-bectomy and clamping collateral veins; therefore, we required the use of other techniques (jump graft from SMV, renoportal anastomosis, and varicoportal anastomosis). These options should be considered for reconstruction of PV. Renoportal anastomosis using an iliac vein graft from a deceased donor was per-formed in the patient who showed diffuse porto-mesenteric thrombosis and large splenorenal shunt. A jump graft from SMV was performed in the patient with grade 2 PVT due to inadequate portal inflow caused by stricture of PV despite throm-bectomy and collateral vessel ligation. In this patient, we used a bovine pericardial patch graft due to lack of available vessel graft. Bovine pericardial patch graft is often used in carotid endarterectomy or heart surgery to repair vessels and valves22 and can be a useful alternative when there is no available vessel graft.

Many groups have introduced effective surgical methods for treatment of PVT such as thrombectomy, venous conduit with collateral veins, jump graft from SMV, renoportal bypass, portocaval hemi-trans-position, PV arterialization, and multiorgan trans-plant. However, there is still no consensus on a standard surgical technique for performing LT in patients with PVT. Therefore, a preoperative decision of available surgical strategies after PVT has been precisely evaluated and the presence of collateral veins or splenorenal shunt by imaging studies are crucial for successful LT in patients with PVT.

In our study, we observed no significant dif-ferences in surgical outcomes and survival between the PVT and the non-PVT group. There were no cases of recurrent PVT after LT. Portal vein stenosis was shown in only 1 patient, who required jump graft from SMV using bovine patch graft. However, our study might have inherent selection bias with regard to the PVT group because this was not a randomized controlled trial. Despite this limitation, our results point to favorable LT outcomes in selected patients with PVT through the design of precise surgical strategies and adequate decisions during LT to ensure sufficient portal inflow.

From the Department of Surgery, Dongsan Medical Center, Keimyung University School of Medicine, Daegu, Korea
Acknowledgements: The authors have no sources of funding for this study and have no conflicts of interest to declare.
Corresponding author: Tae-Seok Kim, Division of Hepatobiliary and Pancreatic surgery, Department of Surgery, Keimyung University School of Medicine, 56 Dalseong-Ro, Jung-Gu, Daegu, Korea 700-712
Phone: +82 53 250 7488
E-mail: gskim80094@naver.com

Table 1. Surgical Procedure According to Yerdel Classification and Outcomes 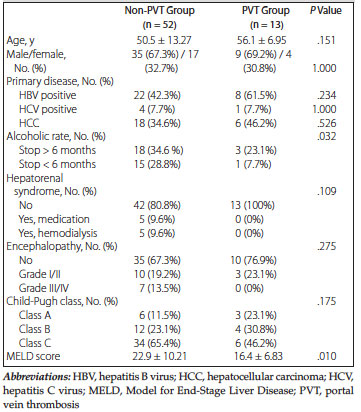 Table 2. Demographics and Clinical Features of Patients With and Without Portal Vein Thrombosis 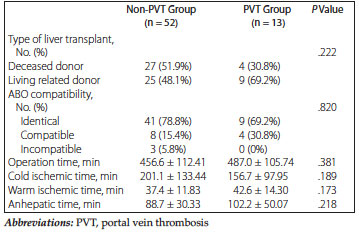 Table 3. Operative Variables of Patients With and Without Portal Vein Thrombosis 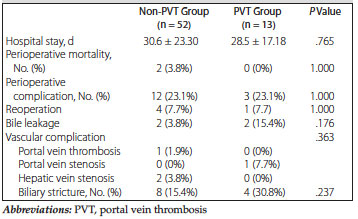 Table 4. Surgical Outcomes of Patients With and Without Portal Vein Thrombosis 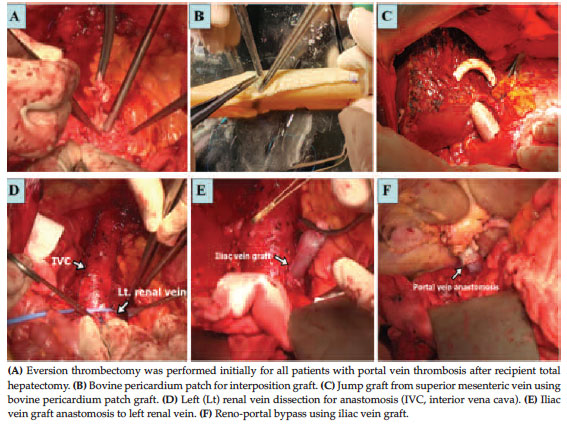 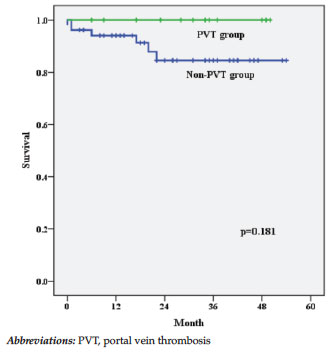 Figure 2. Patient Survival Did Not Differ Significantly Between the Groups (P = .181)