Objectives: In this retrospective study, we aimed to determine the diagnostic value of unenhanced computed tomography in the assessment of macro­vesicular steatosis in potential living liver transplant donors by using biopsy as a reference standard.

Materials and Methods: This retrospective study was approved by our institutional review board, and all included patients provided written informed consent. Our study group included 181 donor candidates (mean age of 35.9 ± 9.3 y) who underwent unenhanced computed tomography and subsequent needle biopsy (mean period after scan of 12.74 d) in the right hepatic lobe (at least 2 samples per patient). Histologic degree of macrovesicular steatosis was determined. A radiologist with 10 years of experience assessed steatosis of the right hepatic lobe by using 2 methods: (1) a 4-point visual grading system that used attenuation comparison between the liver and hepatic vessels and (2) the liver attenuation index, which was calculated with region of interest measurements of hepatic attenuation. We used statistical analyses to compare accuracy in the diagnosis of macrovesicular steatosis.

Living-donor liver transplant can restore the health of the recipient; however, equally important is maintaining the health of the donor during the process. In liver transplant, graft failure is the most unwanted result and can negatively affect both sides, with macrovesicular steatosis being one of the most significant factors leading to graft failure.1 A standard evaluation of the donor candidate includes a physical examination, laboratory tests, imaging with computed tomography (CT) or magnetic resonance imaging, and liver biopsy. Although liver biopsy is considered to be the standard method for quantitative assessment of hepatic steatosis, it is invasive and may cause morbidity.2 Therefore, a noninvasive method is needed to diagnose steatosis for improving donor safety. In this study, our aim was to determine the diagnostic performance of unenhanced CT in the assessment of macrovesicular steatosis in potential living donors of liver transplant by using biopsy as a reference standard.

This retrospective study was approved by our institutional review board, and all study participants provided written informed consent.

The biopsy specimens were prepared with hematoxylin-eosin staining for histologic review. An experienced hepatic pathologist who was blinded to the radiologic findings defined the degree of macrovesicular steatosis semiquantatively as the percentage of fatty cells that replaced the liver parenchyma on the histologic specimen.

In the moderate (grade 2) and high (grade 3) steatosis groups, 7 of 11 candidates and 0 of 13 candidates, respectively, were selected as donors. During transplant and follow-up, there were no serious complications thought to be secondary to steatosis for both recipients and donors in this study.

In this retrospective study, we evaluated the value of unenhanced CT as a noninvasive way to detect hepatic steatosis in living liver donor candidates. Our results showed that accuracy of both the visual grading technique and the liver attenuation value in the diagnosis of severe steatosis was similar to that shown previously.3,4

For the ROI measurement method, an optimal result requires the sample area to contain a large volume of parenchyma without large vessels, thus avoiding large vessels decreasing the sample area. Therefore, biopsies with limited sampling size may lead to inaccurate detection of steatosis because the fat distribution in the liver may not be equal at all points.5,6 However, this problem could be overcome by using multiple ROIs and averaging the measurements. In our study, the area under the receiver operating characteristic curve of liver attenuation measurement was 0.982 (95% confidence interval, 0.962-1) and the cutoff value of 49.3 HU showed 100% sensitivity and 91.8% specificity in donor candidates with ≤ 30% steatosis. Kodama and colleagues found that a liver attenuation value of 59.1 ± 7.3 HU represents 1% to 25% fat accumulation.7 Our results showed that liver attenuation results per unenhanced CT scans of 58.93 ± 5.07 HU and 47.8 ± 4.17 HU correlated with 0% to 5% and 5% to 30% steatosis, respectively.

We found that visual grading with CT for diagnosis of severe steatosis provided high sensitivity (11/13 donor candidates ≥ 30% steatosis) and high specificity (100%), as similarly previously shown.8 Radiologists can evaluate a large area of hepatic parenchyma in seconds with this technique. We believe that the high diagnostic performance of our results may have been based on the low prevalence of severe macrovesicular steatosis in our study population, as seen in other studies.4,8 Nevertheless, we believe that our results are encouraging and that use of the visual grading technique with CT for diagnosis of ≥ 30% steatosis is a fast and reliable method.

Although biopsy remains the only way to detect occult pathologic abnormalities, such as hepatitis, iron deposition, and fibrosis, it can adversely affect both the recipient allograft and the donor remnant after transplant. Liver biopsy is an invasive method and may cause morbidity.9 Today, its necessity in evaluation of living liver donors remains controversial.10 For our donor candidates who had ≥ 30% macrovesicular steatosis according to CT findings, there were no abnormal medical findings and further decision-making before donation would not be needed. Although further evaluation with biopsy can be expensive and risky and although the liver transplant donor pool remains low, a false exclusion for false-positive diagnosis using CT is unacceptable. Therefore, a biopsy is still needed to confirm the steatosis and rule out any hidden pathologies.

As shown previously, a macrovesicular steatosis of < 30% is considered suitable for transplant,11 which is in line with the outcomes of our study. We did not observe any complications in our study groups.

This study has some limitations. First, the effects of microvesicular steatosis on hepatic attenuation were not calculated. Microvesicular steatosis might also have an additional impact on the liver attenuation value.8 Second, in our study, there were only 13 donor candidates with severe steatosis (30%). Third, although biopsy is considered to be the reference standard for quantification of hepatic steatosis, sampling failure can occur due to limited sampling size.6 Fourth, hemosiderin deposits were not analyzed in pathologic specimens. Deposition of iron has an effect on liver attenuation, making liver parenchyma densities less reliable for detecting steatosis.12

Assessment of liver attenuation by use of unenhanced CT represents an objective and noninvasive method for detection of severe hepatic steatosis. Its use can prevent unnecessary biopsies in donor candidates who have ≥ 30% macrovesicular steatosis.

From the 1Department of Radiology and the 2Department of Pathology, Baskent University, Faculty of Medicine, Ankara, Turkey
Acknowledgements: The authors have no sources of funding for this study and have no conflicts of interest to declare.
Corresponding author: Kemal Murat Haberal, Department of Radiology, Baskent University, Faculty of Medicine, 06490, Bahcelievler, Ankara, Turkey
Phone: +90 312 203 6868/1165
E-mail: kmhbjk@hotmail.com 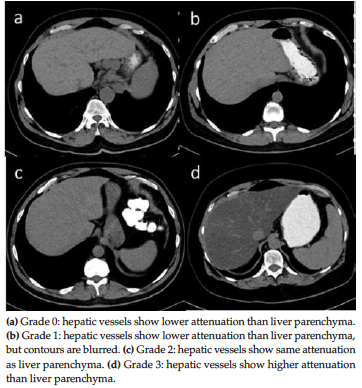 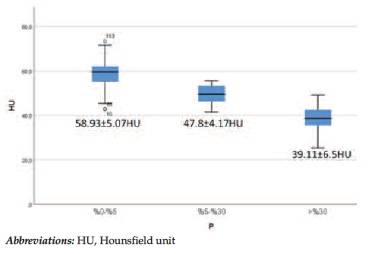