Materials and Methods: After Internal Review Board approval, a retrospective analysis of kidney transplants completed at the University of Toledo Medical Center between March 2004 and November 2015 was conducted.

Disparities between female and male patients continue to plague the field of renal transplantation. Previous studies have reported reduced female allograft survival1 and higher rates of acute rejection compared with men.2 However, others dispute sex disparities with regard to graft and patient survival.3 Women are less likely to be placed on wait lists and less likely to receive an allograft.1,4,5 Together, female patients with end-stage renal disease continue to face substantial challenges.

Induction protocols are widely used to improve a variety of posttransplant parameters.6 However, whether a single agent (or combination therapy) has the potential to nullify sex disparities remains unknown. One induction agent that has shown promise, especially in preventing rejection among high-risk patients, is alemtuzumab (Campath®, Bayer HealthCare Pharmaceuticals, Berlin, Germany).7 Alemtuzumab is a humanized immunoglobulin G1 monoclonal antibody against CD52, a receptor found on the majority of leukocytes. Binding of CD52 by alemtuzumab targets the cell for antibody-directed cell death.8 After the administration of alemtuzumab, lymphocyte counts remain significantly reduced for up to 9 months.9 This sustained reduction has simplified immediate posttransplant immunosup­pressive regimens.10 For these reasons, alemtuzumab induction has been adopted at our institution and is utilized in roughly 13% of kidney transplant procedures in the United States.11 Unfortunately, few investigators have reported on outcomes in men versus women after alemtuzumab induction. The present study was undertaken to study delayed graft function (DGF), acute rejection, patient survival, and death-censored graft survival across biological sexes after alemtuzumab induction. Based on previous reports, we hypothesized that female recipient grafts would perform less favorably.

All recipients were cross-matched for T- and B-cell status via flow cytometry. The participants included in our study all had negative cross-matches. All cases of acute rejection were biopsy proven.

Patients were treated with 25 mg of diphenhy­dramine intravenously (IV), 500 mg of meth­l­prednisolone IV, and 30 mg of alemtuzumab IV before incision. Additionally, in most cases, 540 mg of mycophenolate sodium was administered by mouth (PO) in the preoperative area.

Over the study period, 675 transplants were completed. Our study cohort included 246 female patients (36.4%) and 429 male patients (63.6%). Patients with white race/ethnicity constituted most of both the female and male recipient populations (69.5% and 71.8%, respectively). African Americans comprised the second-most common race/ethnicity in both our female and male groups (25.6% and 20.7%, respectively). Female recipients were younger than their male counterparts (50.6 vs 53.1 y; P = .05). Donor age was not significantly different between recipient sexes. Women received a female allograft 47.6% of the time, and men received a male allograft 56.6% of the time (P = .291).

Diabetes mellitus constituted the most common reason for transplant among both female and male patients, occurring at a similar percentage (Table 1). Cold ischemia times were comparable between female and male patients (12.68 vs 12.94 hours, respectively). Similar rates of living donors (P = 1.0), elderly recipients (P = .905), and time on dialysis (P = .974) were seen in both sexes (Table 1). The mean PRA score was significantly higher in female recipients than in male recipients (18.2 vs 8.03; P < .001) (Table 1). However, the median PRA score for both sexes was 0.

Cardiovascular disease accounted for a large (but statistically similar) percentage of deaths in both female and male patients (34.7% of female deaths vs 17.2% of male deaths). Infectious processes, however, caused a statistically larger percentage of female (27.6%) than male (9.7%) deaths (P = .022). Therefore, the leading causes of death were infection and cardiovascular disease in the female and male populations. Subset analysis showed that a PRA score of greater than 25 was seen in 45.6% of women but only 23.9% of men with infectious complications (P = .014). In addition, 25.0% of female patients and 86.7% of male patients with a BSA greater than 1.7 m2 experienced an infectious complication (P < .001).

In a subset analysis of patients who experienced graft loss, body surface area > 1.7 m2 did not affect death-censored graft survival in either the female (88.9%) or male (94.6%) populations at 5 years after transplant (P = .231). African American female patients compared with female patients who were not African American did not have inferior death-censored graft survival outcomes at 1, 3, or 5 years (Table 3). In addition, they experienced similar infectious complications (39.7% vs 47.0%; P = .314).

Repeat transplant did not alter graft survival across sexes. However, after retransplant, women were more likely than men to have infectious complications (36.0% versus 24.3%, respectively; P < .001).

Delayed graft function is an important prognostic indicator of renal allograft success. The presence of DGF is known to strongly affect both short- and long-term outcomes.13 Classically, male recipients experience higher rates of DGF.14 The reason remains unclear. However, the protective effect of estrogen on ischemia/reperfusion injury remains a popular hypothesis.14 Interestingly, in our population, this disparity was not seen and DGF rates across sexes were similar (and low). This represents an improve­ment for men and likely helped male 3- and 5-year graft survival rates.

Biopsy-proven acute rejection (BPAR) within 90 days after transplant was seen less frequently in our female recipient pool. Kaplan-Meier analysis demonstrated sustained superiority in the female population up to 40 months after transplant (Figure 1). These findings are contrary to previous reports showing higher rates of BPAR in female renal allograft recipients when alemtuzumab is not used.15,16 However, studies that included men and women have shown reduced BPAR after alemtuzumab induction.7 The current report is the first to find sex-specific improvements in BPAR that favor female recipients after alemtuzumab induction despite significantly higher female recipient PRAs. We attribute these findings to enhanced potency of alemtuzumab on female patients who, on average, have smaller BSAs than men. It should be noted that, during the writing of this manuscript, rejection rates at 90 days and 180 days were noted at our center, which ranged from 12.6% to 24.6%. After analysis of the data included herein, patients at high risk for rejection were started on low-dose, indefinite prednisone therapy. High risk included patients with PRA greater than 20, having retransplant or DGF, and African American race/ethnicity. This sole implementation lowered our acute rejection rates to less than 10% (data not shown).

During subset analysis of the rejected population, donor and recipient BMI and BSA results were evaluated. Historically, donor and recipient obesity has been correlated with less favorable outcomes.17,18 Our female and male recipient BMIs were similar. However, female recipients had smaller weights and BSAs. We argue that recipient BSA better reflects a drug's volume of distribution. Because the same dose was given to both women and men, the potency of alemtuzumab could have been enhanced in the female population as a result of their physical characteristics. This remains one explanation for the lower early rejection rates seen in our female population. We found women younger than 45 years of age to be more likely to have graft rejection versus their older counterparts. By virtue of age, younger women are more likely to be premenopausal with higher levels of circulating estrogens. Estrogen's enhancement of humoral immunity via inhibitory effects on T-suppressor cells would therefore predispose premenopausal women to rejection.19

In our study, we used monocytes as a surrogate for humoral immunity. Monocytes are known to respond to the deposition of C3a and C5.20 As expected, monocytes were the most common infiltrate seen in female patients with rejection. In men, lymphocytes (ie, cell-mediated immunity) predominated. Interestingly despite estrogen enhancement of humoral immunity among women, the rejection types were similar between men and women and occurred in proportions similar to previously shown.21 Female patients, as a result of their reduced graft survival, would be expected to have higher Banff classifications,22 yet alemtuzumab did not preferentially improve the Banff classification for either women or men.

Regarding all-cause mortality, previous reports have shown similar rates across sexes after renal transplant.23-25 However, our analysis showed that female recipient survival was improved with alemtuzumab induction. We attributed this to a younger female population in the current study and known longer life expectancies among American women versus men.26 Nonetheless, subset analysis was performed with the hope of correlating recipient characteristics with posttransplant complications. Specifically, it was noted that women, rather than men, with BSAs less than 1.7 m2 were prone to infection. In addition, we found that female patients with DGF or retransplant experienced more infectious complications than matched men. Women are more likely to receive a higher dose of alemtuzumab per body mass when considering mean weight. A weight-based dose of alemtuzumab (0.4 mg/kg) has recently been shown to be as effective in preventing acute rejection while reducing the number of infectious complications as shown in patients who received less than 30 mg of alemtuzumab.27 The reason for these findings remains unclear. However, because of these findings, we recommend close follow-up in women, especially those with DGF or retransplant.

Reports outlining allograft survival across sexes have revealed mixed results. A report in 2003 that analyzed the United States transplant database indicated that graft survival after living-donor renal transplant was inferior in female recipients.1 Alternatively, other analyses have demonstrated equal graft survival between women and men.28,29 In our study, death-censored graft survival among female recipients at 3 and 5 years was worse. Variables affecting these results should be noted. Specifically, a higher mean female PRA placed them at increased risk for rejection. Alemtuzumab induction likely mitigated early immunologic risk. Over time, however, higher female PRAs predominated and affected midterm (ie, 3- and 5-year) allograft parameters. Retransplant, which is known to carry a greater risk of graft failure,30 occurred (although not statistically) more in our female population. Previous reports have noted higher female retransplant rates,31 which are believed to be secondary to H-Y mismatch.32 As an aside, patients with African American heritage did not show worse graft survival after alemtuzumab induction. This finding confirms published research showing the equalization of graft failure between ethnicities after alemtuzumab.33 Our group at the University of Toledo Medical Center recently demonstrated equal rates of rejection, graft survival, and overall survival across ethnicities following induction with alemtuzumab.34

This report provides new insights into the associations between alemtuzumab induction and sex-specific renal allograft outcomes. Because midterm female graft survival continues to be of concern in women, we recommend close follow-up and a low threshold for biopsy in this population. Furthermore, we continue to advocate the use of alemtuzumab in high-risk populations, including African American recipients and sex-mismatched and weight-mismatched individuals, as alemtuzumab showed a potential benefit for each of these populations in the present study. To what degree alemtuzumab benefits younger women who are at increased risk of rejection remains unknown. Furthermore, it remains unknown whether dose escalation of alemtuzumab in patients with a BSA above 1.7 m2 should occur. To answer these questions, further studies are needed.

The strengths of this study include the large patient population, the consistency of the medical regimen, and the consistent surgical technique provided almost exclusively by 2 surgeons. Limitations include the retrospective nature of the analysis at only a single site. Additionally, other parameters, including pre- or postmenopausal status, allograft mass, and allograft volume, were not captured. Furthermore, not all recipients required a protocol biopsy, and this may have limited the number of enrollees and power of the study. A requirement for patients to consent for protocol biopsy likely would predispose a selection bias, as only a subset of the true population would be included. However, protocol biopsies have been shown to improve the prognosis and detection of subclinical rejection.40 Data regarding rehos­pitalization rate, the specific nature of infections, including BK viral reactivation, and mean calcineurin inhibitor (tacrolimus) trough serum levels were not captured, although our target range was defined and monitored. To better understand sex-specific outcomes after renal transplant, a large, multicenter study is needed. 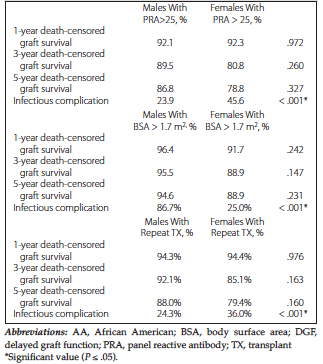 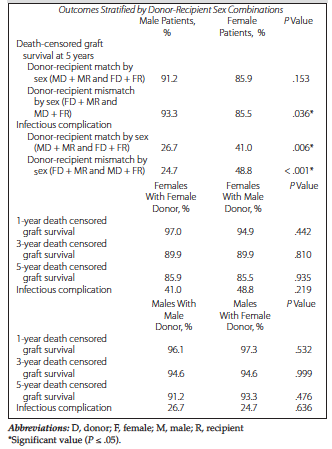 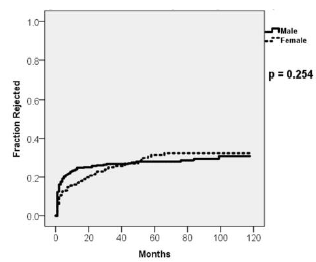 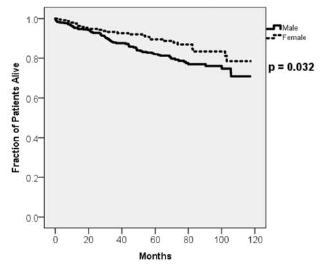 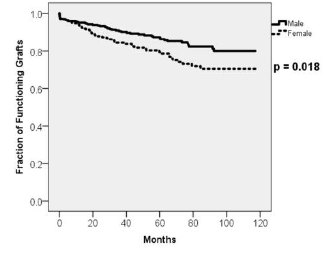