Material and Methods: Our retrospective cross-sectional study included 91 adult kidney transplant recipients who were seen between 2015 and 2017 and who had follow-up from 1 month to over 2 years. BK viremia was evaluated by use of plasma quantitative polymerase chain reaction. The prevalence of BK viremia and the clinical treatments and outcomes of BK virus nephropathy were assessed.

Conclusions: Delayed graft function was considered as a risk factor for viremia. Early detection of BK viremia replication is important. The strategy of reduction of immunosuppression was effective for BK virus nephropathy and graft function improvement.

BK virus is a type of nonenveloped DNA virus of the polyomaviridae family, which is known to relate to nephropathy and graft dysfunction in patients after kidney transplant.1 It was first isolated and investigated by Gardner and associates in 1971.2 It colonizes in the urinary tract and gets reactivated when the immune system is suppressed after kidney transplant. BK viremia has been shown to develop to BK virus nephropathy (BKVN) in 1% to 10% of kidney transplant patients.3 This disease has a progressive effect on graft function and can even lead to graft loss. Considering the importance of BK viremia in kidney transplant, it is crucial to determine the main risk factors causing BK viremia and nephropathy. In previous studies, the intensity of immunosuppression, male versus female recipient, acute rejection treatment, and HLAs were recognized as risk factors of BK viremia.4

Although both BK viruria and BK viremia can be monitored by screening test of polymerase chain reaction, which are now used as surrogate markers of BKVN, there is no universally accepted strategy for monitoring the infection. Reduction of immuno-suppression has been recognized as an effective therapeutic strategy, with a period of more than 12 weeks of reduction shown to be necessary for significantly reducing viral load levels.5 Meanwhile, the effects of leflunomide or mizoribine trans-formation still remain to be proven.6 In this study, our aim was to screen for prevalence of BK viremia, understand the value of intervention for BKVN, and determine the risk factors associated with BK viremia in kidney transplant recipients.

Our retrospective cross-sectional study included 91 adult kidney transplant recipients seen at the Beijing Chaoyang Hospital of Capital Medical University between July 2015 and January 2017 who received follow-up from 1 month to greater than 2 years. All patients underwent deceased-donor transplant procedures. Patients who had a second transplant or living-donor kidney transplant were excluded from this study. After transplant, patients were further classified into 3 groups according to their BK viremia detection time: 1 to 6 months, 6 months to 1 year, and 1 to 5 years after transplant.

Immunosuppressive regimen
For induction therapy, basiliximab or antithymocyte globulin was administered intravenously to most of the recipients; 30 patients received no induction therapy. On the day of transplant, methylprednisone (500 mg/day) was given for 3 days. This was followed by triple immunosuppression with tacrolimus or cyclosporine adjusted to maintain morning trough plasma levels of 8 to 12 ng/mL and 150 to 250 ng/mL, respectively, for 3 months, mycophenolate mofetil, and prednisolone tapered to 5 mg/day by 3 months.

Detection of BK viruria, BK viremia, and BK virus nephropathy
Since November 2016, our hospital has performed urinary and blood screening tests for BK virus using molecular biology. BK virus polymerase chain reaction was conducted monthly during the first half year posttransplant and then every 3 months posttransplant. An inferior amount of plasma or urine quantification of 1 × 104 copies/mL was used as the cutoff for positive diagnoses. Biopsies were classified according to Banff criteria for kidney graft pathology. We also conducted immunohistochemistry for polyo-mavirus SV40 antigen in the biopsies.

Risk factor for BK viremia
Presence of DGF was significantly different between the BK viremia and BK-negative kidney transplant recipients (P < .001; Table 1). When we examined the 6 month to 1 year and the 1 to 5 year time to detection groups, DGF was regarded as a risk factor for BK viremia (P = .02 and P < .001; Table 3). Underlying diseases in patients diagnosed with BK viremia at 1 to 5 years posttransplant differed from the other groups, with significant differences shown between presence of BK viremia and being BK negative.

Clinical significance
Laboratory data of recipients, including biochemical and blood routine examinations, were compared between the BK-negative and the BK viremia groups (Table 4) and compared between patients detected at 6 month to 1 year and at 1 to 5 years posttransplant (Table 5). The BK-viremia group had significantly higher serum creatinine levels than the BK-negative group (P = .04). However, there were no significant differences in any other terms. When we examined patients at 1 to 5 years posttransplant, both serum creatinine (P = .02) and uric acid (P = .02) levels were higher in the BK viremia group.

Clinical outcomes of BK viremia and BK virus nephropathy
All 5 patients with BK viremia received allograft biopsies. Four patients who were diagnosed with BKVN were investigated regarding their treatment regimen (Table 6). Two patients were treated with immunosuppression reduction (tacrolimus) and leflunomide. The other 2 patients were treated with immunosuppression reduction (tacrolimus) and mizoribine (1 of these 2 patients was switched from tacrolimus to cyclosporine). The mean detection time after transplant was 13.5 months (range, 8-16 mo). The mean duration from detection of viremia to achieving clearance was 5.5 months (range, 2-8 months).

The peak viral loads of all patients were > 1 × 104 copies/mL. Creatinine levels of all patients increased to a stable and higher level after diagnosis and treatment. No patient had allograft loss in the follow-up period.

In our cross-sectional study, we reviewed 91 kidney transplant recipients who had follow-up data from 1 month to over 2 years. In our patient group, we observed BK viremia prevalence of 5.5% and BKVN diagnosis of 4.4% with no graft losses. These results were generally consistent with the 4.2% prevalence reported previously.7 In our study, the mean time of viremia detection was 13.5 months after transplant. The literature reported that the time of highest infection risk is the first 6 months posttransplant.8 However, in our study, no BK viremia was detection in the first 6 months, perhaps due to limitations of this cross-sectional study.

Previous studies noted a possible significant rela-tionship between immunosuppression or induction therapy and the incidence of BK viremia.9,10 In a cross-sectional study of 110 patients, Mohammad and associates11 found that tacrolimus therapy increased the risk of BK virus replication after transplant. In our study, we found no significant differences between the 3 immunosuppression groups. However, the low number of patients receiving cyclosporine may have biased our results.

Hirsch and associates3 reported that having a deceased donor may be a risk factor for BK viremia, although this was not demonstrated in our study. In a retrospective analysis of 23 patients with histologic evidence of BKVN over 10 years, Costa and associates12 reported 3 patients had DGF, which was regarded as one of the main risk factors. In our analyses of DGF, we found significant differences between kidney transplant recipients with BK viremia versus those who were BK negative. We are the first to report this clinical significance. The most common previous pathologic findings associated with DGF were acute tubular necrosis, including dilatation of tubules, and epithelial cell necrosis.13,14 That is, damaged epithelial cells may provide a place for BK viruses to replicate in the kidney.15

Creatinine levels also have been shown to have a significant correlation with BK viremia.16 Our study also identified that creatinine elevated significantly in the BK viremia group. Interestingly, uric acid and creatine were both significantly elevated in the 1- to 5-year detection group.

Although no standard protocol for treatment of BKVN currently exists, some studies have indicated that intravenous immunoglobulin, leflunomide, and cidofovir could work against the BK virus.17,18 Nevertheless, most studies suggested that the strategy of reducing immunosuppression also was effective, especially reduction of tacrolimus.19 In our study, we primarily lowered tacrolimus levels (1 patient was switched to cyclosporine) after detection of BK viremia. Additionally, if diagnosis of BKVN was established, mycophenolate mofetil was replaced with mizoribine or leflunomide. During treatment, creatinine levels in all patients increased to a higher level, which was maintained after clearance of BK viremia. Although the allograft had irreversible damage, allograft function became stable after clearance without rejection or graft loss. Some reports have also stressed the importance of early detection of BK viremia and timely therapeutic interventions.20,21

Our cross-sectional design and small sample size were limitations of our study. Because follow-up of some patients for BK screening was not regular (for different reasons), the detection time of BK viremia or BK viruria was limited.

Our cross-sectional study indicated that DGF is a risk factor for BK viremia in kidney transplant recipients. Based on the positive surveillance, early detection of BK viremia, and pathologic diagnosis of BKVN, systematic reduction of immunosuppression and use of mizoribine or leflunomide are effective for clearance of BK viremia and prevention of graft loss. Further studies with larger sample sizes are required to expand our knowledge.

Table 2. Detection time of BK Viremia and BK Viruria in All Patients 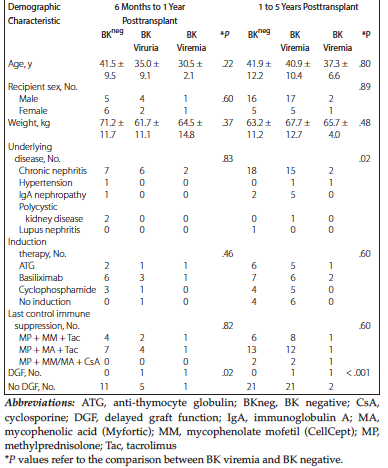 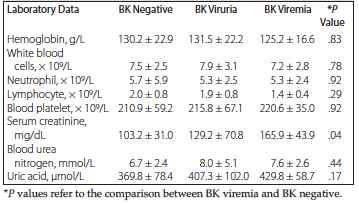 Table 6. Clinical Changes in Immunosuppression and Outcomes of Patients with BK Virus Nephropathy