Objectives: Systemic lupus erythematosus and granulomatosis with polyangiitis are systemic inflam­matory conditions associated with renal failure that can recur after renal transplant. Patients with these con­ditions are treated with chronic immuno­suppression, potentially increasing risk of secondary malignancies. Here, we investigated long-term outcomes in renal transplant recipients with these conditions.

Materials and Methods: Transplant recipients with end-stage kidney disease due to systemic lupus erythematosus and granulomatosis with polyangiitis seen between 1982 and 2016 at a national kidney transplant center were included. Primary outcome variables were long-term allograft survival and incidence of secondary malignancy. Secondary outcome measures were incidence of delayed graft function, primary disease recurrence, and serum creatinine at follow-up.

Conclusions: We found excellent long-term renal allograft survival rates in patients with systemic lupus erythematosus and granulomatosis with polyangiitis, with secondary malignancy rates similar to those shown in recipients without autoimmune diseases. These findings provide clinicians with long-term data on transplant recipients with end-stage renal failure due to systemic inflammatory conditions.

Progressive renal dysfunction leading to renal transplant is a feature of many systemic inflammatory diseases such as systemic lupus erythematosus (SLE) and granulomatosis with polyangiitis (GPA). In transplant recipients, there is a risk of primary disease recurrence in renal allografts due to the systemic nature of autoimmune conditions. In addition, the mainstay of long-term treatment involves immunosuppression, which can increase the risk of secondary malignancies after transplant.1 The pathophysiology of SLE is characterized by the development of multiple autoantibodies, including antinuclear antibodies and anti-double-stranded DNA and anti-smooth muscle antibodies. These circulating antibodies form immune complexes when they encounter their target antigen, leading to complement activation and an inflammatory cascade. The clinical manifestations of SLE are defined by the American College of Rheumatology or the more recently developed Systemic Lupus International Collaborating Clinics Criteria and include constitutional symptoms, cutaneous mani­festations, vasculitis, arthritis/arthralgia, and renal disease among others.2,3

In comparison, GPA is one of several conditions comprising antineutrophil cytoplasmic antibody (ANCA)-associated vasculitides, in conjunction with microscopic polyangiitis and eosinophilic granu­lomatosis with polyangiitis. Definitions of these autoimmune conditions were described in the Chapel Hill Consensus Conference in 19944 and revised in 2012.5 Granulomatosis with polyangiitis is defined as follows: “Necrotizing granulomatous inflammation usually involving the upper and lower respiratory tract, and necrotizing vasculitis affecting pre­dominantly small to medium vessels (eg, capillaries, venules, arterioles, arteries, and veins). Necrotizing glomerulonephritis is common.”5 Renal disease is reported to develop in the form of necrotizing crescentic glomerulonephritis in ? 75% of patients.6

Although allograft outcomes after short- and intermediate-term follow-up have been described for patients undergoing renal transplant with end-stage renal failure (ESRF) due to SLE and GPA, there are no studies that have investigated long-term renal allograft survival with these conditions. In the present study, we present our long-term outcomes of patients undergoing renal transplant for ESRF due to SLE and GPA.

Overview of study design
A retrospective institutional review board-approved study was performed on all kidney transplant recipients seen at a national kidney transplant center (Beaumont Hospital, Dublin, Ireland) who had renal failure due to SLE or GPA. Data on all kidney transplant recipients in Ireland are prospectively collected in the national renal transplant database. The primary outcome variable was long-term allograft survival. Secondary outcome variables were overall patient survival, incidence of delayed graft function, serum creatinine level at most recent follow-up, and incidence of secondary malignancy. Data on secondary malignancies were obtained from the Irish National Cancer Registry (www.ncri.ie).

Perioperative immunosuppression
In cases of increased immunologic risk (eg, HLA-incompatible donors), patients received quadruple immunosuppressive induction therapy with a calcineurin inhibitor (cyclosporine prior to 2001 and tacrolimus from 2001 onward), an antimetabolite (azathioprine prior to 2002 and mycophenolate mofetil from 2002 onward), prednisolone, and antithymocyte globulin or basiliximab. The remainder of patients received standard cyclosporine- or tacrolimus-based triple therapy. Tacrolimus levels were maintained between 10 and 15 ng/mL for the first 6 weeks and then maintained at 8 to 12 ng/mL thereafter (microparticle enzyme immunoassay; Abbot IMX, Fujisawa Healthcare Incorporated, Co., Kerry, Ireland). Methylprednisolone at 500 mg intravenously was given 12 hours after transplant. This dose was then tapered to 250 mg twice daily for 2 days and then to 250 mg daily for 2 days. Following this, patients were commenced on a tapering dose of prednisolone, beginning with 20 mg orally once daily and then tapering to a maintenance dose of 5 mg once daily.

As part of our department’s protocol, transplant patients also receive anti-pneumocystis pneumonia prophylaxis antibiotic in the form of trimethoprim-sulfamethoxazole during the first 6 months posttransplant and one dose of a broad-spectrum cephalosporin-based antibiotic for perioperative prophylaxis. Valganciclovir was administered for cytomegalovirus prophylaxis if either the donor or recipient was cytomegalovirus positive.

Follow-up
Patients were followed up twice weekly for the first 6 weeks and then once weekly for up to 3 months. After 3 months, patients were followed every 2 weeks for up to 1 year and monthly thereafter. Serum creatinine level was measured after 1 month and every 3 months thereafter. During the follow-up period, the number of allograft failures and the causes of allograft failure were recorded in recipients with a history of SLE or GPA.

Statistical analyses
Data were analyzed using Stata/IC 12.1 (StataCorp, College Station, TX, USA). Survival results were calculated using Kaplan-Meier analysis for overall survival, graft-specific survival, and death-censored graft-specific survival. Results in the SLE and GPA groups were compared with each other and with a national renal transplant cohort, using log-rank testing for the above parameters. All continuous data are reported as means ± standard deviation, and P values < .05 were considered statistically significant. Continuous variables were compared using t tests or Mann-Whitney U tests, and categorical variables were compared using chi-square tests.

Renal transplant is a definitive treatment for patients with systemic inflammatory conditions and ESRF, which affects approximately 30% to 50% patients with GPA and 20% to 30% of patients with SLE.7 Organ transplant leads to improved overall survival in patients with ESRF due to both SLE8 and GPA.9 Importantly, patients should be in remission from their primary disease or have low levels of disease activity prior to renal transplant due to the systemic manifestations that can be associated with autoimmune diseases.10,11 In ANCA-associated vasculitides (including GPA), superior transplant outcomes have been reported for patients that are in clinical remission for ? 1 year at the time of transplant.12 However, the presence of detectable levels of cytoplasmic ANCA does not confer an increased risk of renal allograft failure and should not preclude transplantation.13,14 The main finding of the present study is that renal allograft and overall patient survival for transplant recipients with SLE and GPA compares favorably with renal transplant recipients with nonautoimmune-related diseases after 15-year follow-up.

Traditionally, it has been recommended that patients with ESRF due to SLE should be in clinical remission for 6 to 12 months before renal transplant to minimize the risk of iatrogenic perioperative morbidity.15 However, more recent studies have demonstrated that inferior patient outcomes and increased risk of graft failure are found in patients with longer wait times to transplant compared with patients who are transplanted as soon as a suitable organ is available.16,17 Our finding of equivalent renal transplant outcomes in patients with SLE compared with transplant recipients without autoimmune conditions is consistent with other published studies.18,19 Norby and colleagues described renal allograft survival rates of 88%, 81%, and 71% and overall survival rates of 94%, 83%, and 71% after 1, 5, and 10 years, respectively.20 More recently, Horta-Baas and associates reported 1-year, 2-year, and 5-year graft survival rates of 92%, 66%, and 66%, respectively.21 An analysis of the United Network for Organ Sharing database demonstrated that the incidence of recurrent lupus nephritis after transplant was 2.4%.22 These findings are consistent with our study in which the incidence was low at 1.67% (n = 1/60).

Improvements in immunosuppressive protocols have significantly reduced the incidence of acute rejection and improved long-term renal allograft survival in patients with ESRD due to GPA. One systematic review demonstrated 5- and 10-year renal allograft survival rates of 88% and 67%, respectively, for patients with ANCA-associated vasculitis (ie, GPA and microscopic polyangiitis). In addition, overall survival was 92% and 68% after 5 and 10 years.11 The vasculitis relapse rate was 10.3%, with approximately two-thirds of relapses affecting the kidney.11 Recurrence of disease typically manifests as pauci-immune necrotizing glomerulonephritis. Our findings are consistent with these results as we noted an overall renal allograft-specific survival and death-censored graft survival rate of 92.4% and 89.8% after 10 years.

Transplant recipients are at an increased risk of developing malignancies, and the incidence is 1374 cases per 100?000 person-years.23 This equates to a standardized incidence ratio of 2.10 (95% confidence interval, 2.06-2.14) compared with a nontransplant population. Despite a history of chronic immuno­suppression in transplant recipients with systemic inflammatory conditions, similar overall rates of secondary malignancies have been found. The incidence of secondary malignancy in SLE recipients is 1734 per 100?000 person-years24 and approximately 10% after 5 years for recipients with ANCA-associated vasculitis. In our cohort, skin cancers accounted for > 50% of secondary malignancies that were diagnosed; this likely represents the cumulative risk of long-term immunosuppression. Bouwes Bavinck and associates found that the incidence of skin cancer was 7% at 1 year after renal transplant25 and that the risk increased to 82% after 20 years. The authors suggested that the incidence of skin cancer after transplant is independent of the type or combination of immunosuppressive agents used but rather is a characteristic of immunosuppression in general.25 In comparison, one Dutch study reported an incidence rate of 10% at 10 years and 40% at 20 years posttransplant for skin cancers.26 The incidence of secondary malignancy in our cohort is higher than previously reported, and this is likely due to the longer duration of follow-up compared with other published series.

Our study has limitations, and our results should be viewed with caution. It is a single-center, retro­spective analysis of a prospectively maintained database. However, comprehensive follow-up of all patients with GPA or SLE who underwent renal transplant over a prolonged period was undertaken, and only 3 patients were lost to follow-up. Another potential limitation is that the immunosuppression protocols have changed over time. However, it is likely that expectant alterations to immunosup­pressive protocols over time in patients with long-term autoimmune comorbidities will bias any study investigating factors associated with long-term solid-organ transplant survival and secondary malignancy rate.

The present analysis is the only study to date that has specifically investigated renal allograft survival of ? 10 years in transplant recipients with SLE and GPA. We found that renal transplant is a feasible, safe, and effective treatment strategy for patients with ESRF due to these systemic inflammatory conditions. We also noted excellent long-term renal allograft and overall patient survival rates that were either consistent with or exceeding rates shown in a national transplant recipient cohort (Irish Renal Transplant Cohort). Findings from this study may be useful for providing clinicians with long-term data on transplant in patients with ESRF due to systemic inflammatory conditions. 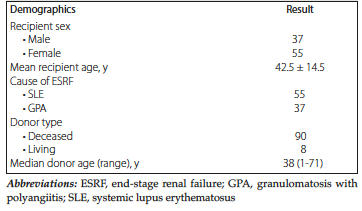