Objectives: We investigated the impact of nonimmuno-logic factors on patient and graft survival after deceased-donor kidney transplant.

Materials and Methods: All deceased-donor kidney transplants performed between January 2004 and December 2015 were included in our analyses. We used the independent t test to calculate significant differences between means above and below medians of various parameters.

Results: All study patients (N = 205; 58.7% males) received antithymocyte globulin as induction therapy and standard maintenance therapy. Patients were free from infection, malignancy, and cardiac, liver, and pulmonary system abnormalities. Most patients (89.2%) were recipients of a first graft. Median patient age, weight, and cold ischemia time were 38 years, 65 kg, and 15 hours, respectively. Delayed graft function, diabetes mellitus, and hypertension occurred in 19.1%, 43.4%, and 77.9% of patients, respectively. The 1- and 5-year graft survival rates were 95% and 73.8%. Graft survival was not affected by donor or recipient sex or recipient diabetes or hypertension. However, graft survival was longer in patients who received no graft biopsy (8.2 vs 6.9 y; P = .027) and in those who had diagnosis of calcineurin inhibitor nephrotoxicity versus antibody-mediated rejection after biopsy (8.19 vs 3.66 y; P = .0047). Longer survival was shown with donors who had traumatic death versus cerebro-vascular accident (5.9 vs 5.3 y; P = .029) and donors below the 50th percentile in age (8.23 and 7.14 y; P = .0026) but less with donors who had terminal acute kidney injury (6.97 vs 8.16 y; P = .0062). We found a negative correlation between graft survival and donor age (P = .01) and 1-year serum creatinine (P = .01).

Conclusions: Donor age, cause of brain death, and acute kidney injury affected graft survival in our study cohort but not donor or recipient sex or posttransplant or donor blood pressure.

The Saudi Center for Organ Transplantation was established in 1984 to control and organize the activities of transplantation and donation.1 In Saudi Arabia, 22% of all dialysis patients are on the wait list for renal transplants, with an additional 20% of patients under investigation for their suitability for transplant.2

Kidney transplant from ideal and marginal donors provides, on average, 13 and 5 years of increased life expectancy for recipients, respectively, compared with patients who remain on wait lists.3 Furthermore, data from the United States show that the wait time for receiving a kidney is more than 3 years; when combined with the high annual mortality rates of patients on wait lists, the use of suboptimal grafts is strongly needed.4-6

Categorizing kidneys is an essential tool for determining prognostic risk factors for kidney transplant to appropriately allocate the donated kidney, counsel the recipients, and assess kidney graft survival, expected kidney function, and incidence of rejection and delayed graft function (DGF).7 There are 2 widely recognized criteria for donated kidneys based on donor characteristics: (1) standard criteria donors (SCD) are under 50 years old and have cause of death of traumatic injury or stroke; (2) expanded criteria donors (ECD) include donors who are more than 60 years old, donors between 50 and 59 years old with history of hypertension and with serum creatinine level > 132.6 μmol/L (> 1.5 mg/mL), and donors with death due to cardiovascular incident.6 Cardiovascular events represent 33% of causes of deaths among brain-dead donors, with 18.1% being over 50 years old.8,9 There has been a steady increase in the use of ECDs due to shortages of donated kidneys coupled with an ever-increasing number of patients on wait lists for kidney transplant. In Saudi Arabia, about 25% of retrieved kidneys are ECD kidneys, which is similar to rates reported elsewhere.9 However, acquiring kidneys from ECDs has a risk of graft loss of more than 1.7 times compared with use of kidneys from SCDs.7

Although categorizing donors as either ECDs or SCDs is easy, it does not reveal the whole spectrum of associated risks nor does it consider risk factors of the recipients.7 Risk factors that predict poor outcomes include increased body weight, history of hypertension, longer hospital stay, and adrenaline use.7 Short- and long-term graft survival rates have also been shown to be affected by cause of death, immunosuppressive regimen, infection, acute rejection, cold ischemic time (CIT), which is the period between cold perfusion of the procured kidney and time the kidney is rewarmed for reimplantation, DGF (P < .0005), which is determined as need for dialysis after transplant, donor age, and serum creatinine level.10-12 With regard to 1-year allograft survival, recipient creatinine level, age, CIT, and DGF have been shown to be significant determining factors (P < .05).12,13 Infections also play an important role in graft survival. For example, hepatitis C virus and cytomegalovirus infections have been shown to be significant factors causing relapse or death of recipients.14-16 The recurrence of glomerulonephritis after transplant is another factor that is associated with DGF.17

With regard to long-term outcomes, recipient factors include degree of human leukocyte antigen (HLA) matching, presence of HLA antibodies, and preexisting cardiovascular comorbidities.15 Other factors associated with graft and recipient survival include presence of diabetes mellitus in the donor and lower levels of HLA-DR matching.18,19 Contrary to other findings, neither smoking nor ethnicity has been shown to be associated with transplant outcomes. In addition, in the United Kingdom, cardiovascular disease, diabetes, and terminal creatinine did not significantly affect outcomes.10

Conflicting results regarding factors affecting outcomes necessitate the exploration of risk factors in Saudi Arabia. Here, we present the first study that attempts to determine factors associated with graft survival in Saudi Arabia. The aim of our research is to inform readers of the results of deceased-donor kidney donor transplant at a single kidney transplant center.

This retrospective cohort study was conducted at the kidney transplant center of King Abdulaziz Medical City (KAMC) in Riyadh, Saudi Arabia. The KAMC is a governmental tertiary care center that performs living-donor and deceased-donor renal transplant procedures, provides emergency renal services to 5 to 7 patients per day, and provides consultation to 120 patients every month. The study participants were all adult patients who received a deceased-donor kidney transplant at KAMC between January 2004 and December 2015. The data collection period was between July 2017 and March 2018 and was performed by the consecutive sampling approach.

All data and variables regarding donors were obtained from the Saudi Center for Organ Trans-plantation registry by the coinvestigators. Donor variables included demographic characteristics (age, sex, weight, and blood group), cause of brain death, history of hypertension and diabetes mellitus, date of organ recovery, blood pressure before organ retrieval, serum creatinine on admission and at time of organ retrieval, CIT, and whether the left or right kidney was used.

All data and variables regarding recipients were obtained from the patient medical records via the Bestcare electronic system and physical paper files by the coinvestigators. Recipient variables included demographic characteristics (age, sex, weight, and blood group), incidence of DGF, posttransplant history of hypertension and diabetes mellitus, and incidence of cytomegalovirus, BK virus, or tuberculosis infection. The coinvestigators also documented the recipient’s date of transplant, serum creatinine level at 1 year and on the last available follow-up, death if it occurred and when, graft loss if it occurred and when, and result of graft biopsy if done and when. We also reviewed whether graft loss was due to antibody-mediated rejection (AMR), calcineurin inhibitor (CNI) nephrotoxicity, rejection, BK virus infection, acute tubular necrosis, or other causes. This research was approved by our Institutional Review Board (12/07/2017).

Statistical analyses
Statistical analyses of donor and recipient data were performed with SPSS software (SPSS: An IBM Company, version 24.0, IBM Corporation, Armonk, NY, USA). Data are presented as means and standard deviation for continuous variables and as percentages and proportions for categorical variables. The chi-square test was used to compare percentages and proportions. The 2-tailed independent t test was used for analysis of continuous data. We used the Kaplan-Meier method to calculate graft and patient survival. We used the Pearson t test to analyze correlations between recipient age and serum creatinine levels at 1 year and graft survival.

Multivariate analyses were performed to deter-mine the independence of factors that influenced graft outcomes. We used the Kruskal-Wallis test to assess the effects of donor terminal renal function on the final status of the recipient. P values of .05 or less were considered to be statistically significant.

Our analyses included data of donors and recipients of 205 deceased-donor kidney transplant procedures carried out between 2004 and 2015 at the KAMC.

Assessing the prevalence of delayed graft function, rejection, and infection among transplanted patients
During our follow-up period, 24.5% of grafts were lost and mortality rate was 11.8%. The prevalence of DGF was 19.1%. The incidences of infections in recipients were 7.4% for tuberculosis and 3.9% for BK virus (Table 1). Renal biopsies were performed in 41.2% of our study recipients. The following pathologic findings were shown: AMR in 5.3%, CNI toxicity in 14.7%, cellular rejection in 28%, BK nephropathy in 2.7%, acute tubular necrosis in 28%, and other findings in 21.3% (Table 3).

Analysis of recipient and donor characteristics is important for finding ways to improve long-term transplant outcomes. In our retrospective/prospective cohort study involving 205 recipients of kidney transplant with a median follow-up of 11 years, we found that donor age had a significant effect on graft survival and overall patient survival. As reported by Ma and associates, donor age significantly affected both graft and patient survival.20 This is due to the well-recognized age-related decline in kidney function. It is estimated that glomerular filtration rate, on average, drops by 33% from the 3rd to 7th decade of life.21

We have also found that recipient sex did not affect graft survival and patient survival outcomes. However, Mun woo and Ostrowska and associates demonstrated that the risk of kidney allograft loss was associated with male sex.16,22 A previous report from Saudi Arabia also showed no impact of sex on graft and patient survival.6

In our study cohort, DGF did not affect graft survival (P = .5). This is consistent with the report by Noppakun and associates, which showed no dif-ferences between patients with DGF and those with immediate graft function in terms of patient or graft survival.23 In contrast, several studies have shown that kidney transplant recipients who developed DGF showed worse graft survival.21,24 This difference may be explained by the fact that, in our study, the mean ages of our donors and recipients were quite low; patients of lower ages can perhaps withstand and offset the long-term negative hemodynamic effects resulting from DGF. Moreover, Boom and associates showed that, although DGF negatively affected graft function, it did not affect graft survival.25

We showed that graft survival was longer in patients who did not require a biopsy compared with those who did (P = .03). This is not surprising since the biopsy must have been necessitated by some abnormality in kidney function. Graft survival was also longer in patients with biopsy-proven CNI toxicity than in those with biopsy-proven AMR (P = .02), as would be expected.

Recommendations and limitations
Our study has both strengths and possible limita-tions. Our study specifically compiled a large number of demographic and laboratory factors that can affect graft survival. It also recorded comor-bidities associated with donors and recipients, thus providing a better analysis of factors affecting deceased-donor kidney transplants in one of Saudi Arabia’s largest transplant centers (KAMC). Further comparisons between other transplant centers may help to identify population-specific risk factors and geographic discrepancies. A limitation of our study is its retrospective nature, which reduces control of confounding factors. 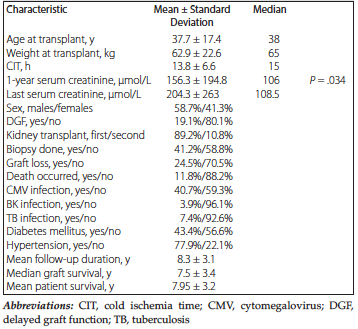 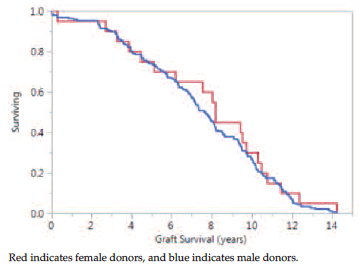 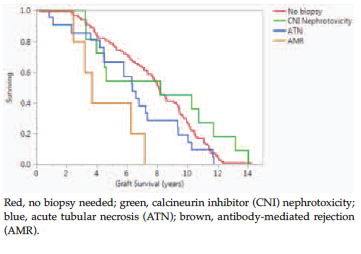 Figure 2. Graft Survival With Regard to Biopsy 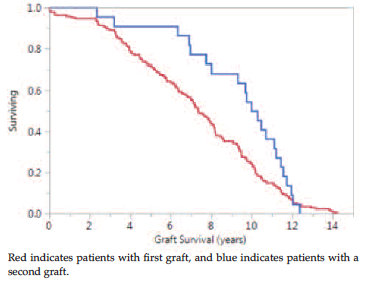