Here, we present, to the best of our knowledge, the first case of Werner syndrome with corneal blindness due to bilateral primary bullous keratopathy. Werner syndrome is a rare autosomal recessive disorder characterized by features of premature aging, insulin-dependent diabetes mellitus, osteoporosis, atherosclerosis, hypergonadotrophic hypogonadism, hypertriglyceridemia, scleroderma-like skin changes, and sarcomas. Among ocular manifestations, cataracts, cystoid macular edema, and retinal detach­ment have been reported. Because these patients show features of premature aging, they have decreased corneal endothelial function and delayed fibroblast growth. To date, there are few reports of wound dehiscence, bleb formation, and bullous keratopathy following surgical insult that have usually occurred after cataract surgery in patients with Werner syndrome. There have been no reports in the literature regarding Werner syndrome presenting with primary corneal decompensation without any inciting factor. Our patient with Werner syndrome had primary bilateral bullous keratopathy and bilateral corneal blindness for 10 years and was eventually rehabilitated by corneal transplant. Hence, this case highlights the importance of early referral of such patients to the ophthalmologist for prompt diagnosis and early treatment so that blindness could be avoided.

Werner syndrome is a rare, autosomal recessive disorder characterized by features of premature aging.1 Systemic features associated with this syndrome include insulin-dependent diabetes mellitus, osteoporosis, atherosclerosis, hypergonadotrophic hypogonadism, hypertriglyceridemia, scleroderma-like skin changes, and sarcoma.2,3 Among ocular manifestations, cataracts, cystoid macular edema, and retinal detachment have been reported.4-6 Bilateral corneal edema and opacification due to primary bullous keratopathy have never been shown to occur in these patients, except after surgical trauma.7 This condition could be attributed to severe and progressive loss of corneal endothelial function due to the premature aging process. Here, we present a patient with Werner syndrome and bilateral bullous keratopathy who had bilateral corneal blindness for 10 years and was rehabilitated by corneal transplant at our tertiary care eye center with good visual outcome.

A 23-year-old male patient presented to the cornea clinic of our tertiary eye care center with significant diminution of vision in both eyes and corneal clouding for over 10 years associated with glare, photophobia, and watering. The patient's symptoms had increased over the past 2 years. No relevant history of ocular trauma, ocular surgery, and use of any medications was elicited. Birth history, perinatal period, and neonatal development were uneventful.

At the age of 15 years, the patient was systemically evaluated and diagnosed with insulin-dependent diabetes mellitus and hypergonadotrophic hypo-gonadism. He had received intramuscular testosterone at that time by the treating physician.

The patient was diagnosed with Werner syndrome and primary bullous keratopathy in both eyes. He was put on medical treatment in the form of topical hypertonic saline 10% and carboxymethyl cellulose 1% eye drops, which were administered to both eyes to provide symptomatic relief from bullous keratopathy. After the patient was able to achieve good diabetic control (HBA1c = 6.8%) through monitored doses of insulin, a full-thickness optical penetrating keratoplasty was performed on the right eye. The postoperative course was uneventful, and the patient continued care for associated comorbidities in tandem with endocrinology for systemic optimization. At 1-month follow-up after keratoplasty, the patient's visual acuity improved from finger counting to 20/80 in the right eye.

Patients with Werner syndrome display features of accelerated aging; this condition is also known as adult progeria. In addition to systemic features like short stature, premature graying of hair, hypo-gonadism, higher incidence of diabetes mellitus, and reduction of muscle mass, our patient presented with severe corneal clouding and visual impairment. This kind of ophthalmic presentation in Werner syndrome has thus far not been reported.

In patients with Werner syndrome, the cornea becomes prematurely aged, which decreases the endothelial pump function that is responsible for maintaining the corneal transparency and which prevents water from collecting in the corneal layers. As a result of deranged metabolic function of the corneal endothelium, decompensation and corneal edema have been reported after surgical trauma.7-10 This kind of bullous keratopathy can also occur in patients with Fuchs corneal dystrophy, in which the endothelial cell count is low. Hence, cataract surgery outcomes are usually poor in these patients due to corneal endothelial decompensation, wound dehis-cence, and decreased rate of fibroblast proliferation.11

In our patient, a clinical diagnosis of primary bullous keratopathy was made with the use of confocal scan imaging, a process that has not been previously documented in this clinical setting. Our case was a dilemma as the diagnosis of primary bullous keratopathy was made retrospectively and we excluded all causes of endothelial decompensation in a young adult. This is a rare occurrence in this age group without any external insult. This case also highlights that early referral of the patient may have prevented blindness.

To summarize, this case highlights the importance of early referral of patients with syndromic mani-festations to an ophthalmology department. Hence, specialists should consider symptoms outside of their specialties and examine a patient as a whole to avoid late diagnosis and irreversible vision loss. 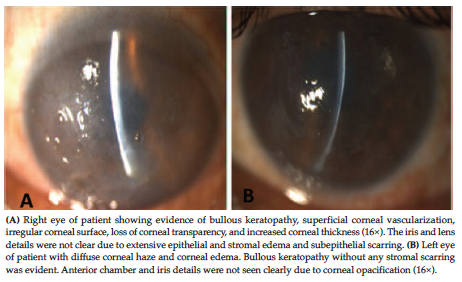 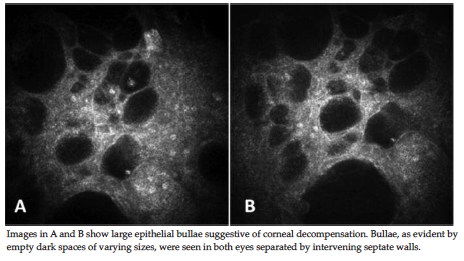