Liver transplant is a life-saving procedure in patients with end-stage liver disease. However, this procedure may be associated with transmission of various deficiencies of proteins synthesized by the liver. Factor I (fibrinogen) deficiency is one of the rare inherited coagulation disorders with an extremely low risk of transmission by liver transplant. We report a case of a patient with no inherited coagulation disorders but who demonstrated disturbance of fibrinogen after liver transplant. This case highlights the ever-present risk of donor-to-recipient disease transmission during transplant and emphasizes the difficulty in procuring organs from donors in which standard blood tests are insufficient to determine the likelihood of this event.

The liver donor was a 34-year-old nullipara woman who was declared brain dead after spontaneous intracranial hemorrhage. Her past medical history was mainly unknown. The donor’s laboratory tests on admission showed prothrombin time of 17.3 seconds (normal range, 11-13 s), internationalized normalized ratio (INR) of 1.62, activated partial thromboplastin time of 32 seconds, and a normal platelet count, hemoglobin, and other routine tests. Ultrasonographic examination of the donor’s abdomen before organ procurement showed liver having normal parenchymal echogenicity without pathologic lesions. In addition, the donor’s pre-transplant biopsy did not reveal any pathologic findings, such as marked steatohepatitis, fibrosis, necrosis, or malignancy. Figure 1 shows histology of the liver taken by needle biopsy on the day of organ procurement.

The recipient was a 56-year-old man with end-stage liver disease secondary to hepatitis B. Model for End-Stage Liver Disease score was 29. Neither he nor his family reported a history of bleeding disorders. The patient underwent deceased-donor liver transplant in November 2014. Duration of the procedure was 6 hours, with total cold ischemic time of 189 minutes and total warm ischemic time of 52 minutes. There was no unusual bleeding during the operation. The total blood loss was 3.6 L. The patient was given 5 units of packed red blood cells and 8 units of fresh frozen plasma. The liver functioned well postoperatively, and the patient was extubated in the operating room. In the intensive care unit, the patient was maintained on tacrolimus-based immunosuppression therapy on postoperative day 1. He was given hepatitis B prophylaxis with hepatitis B immunoglobulin.

The coagulation profile on postoperative day 1, compared with the pretransplant findings, was at acceptable levels (partial thromboplastin time of 36 seconds, prothrombin time of 23.7 seconds, INR of 1.89, and platelet level of 74 × 109 L). However, postoperatively, the coagulation profile persistently fluctuated widely during the following days. An attempt was made to find the cause of this condition. Blood tests showed fibrinogen level of 2.058 μmol/L (70 mg/dL; reference range, 200-400 mg/dL), with other coagulation factor test results at normal ranges. The immunoreactive fibrinogen level in the plasma was low; therefore, a diagnosis of afibrinogenemia was made.

The patient was administered virally inactivated fibrinogen concentrate (human; Haemocomplettan P; CSL Behring, Marburg, Germany) intravenously at 1 g twice per week. Forty days after liver transplant, the patient was discharged with a prothrombin time of 19.3 seconds, activated partial thromboplastin time of 32 seconds, and INR of 1.62. Seventeen days later, the patient was admitted with severe swelling and a blue discoloration of his right hand. Figure 2 shows a view of the patient’s hand on readmission. A color Doppler ultrasonography of the hand was done, which did not show any venous thrombosis or arterial obstruction. The patient received a diagnosis of cellulitis and responded well to treatment with antibiotic therapy. During the 10 days of his hospitalization, he was given 10 units of fresh frozen plasma and 5 units of cryoprecipitate.

At about 10 months after transplant, the patient developed persistently abnormal serum amino-transferase levels. The hepatitis B viral load was undetectable on his quantitative real-time polymerase chain reaction test. A percutaneous liver biopsy was performed, confirming an episode of rejection of the graft, which responded to standard treatment with steroids. At present, the patient’s tests indicate good liver function. He has continued with fibrinogen concentrate treatment (1 g twice per week). His coagulation profile and fibrinogen level have remained within acceptable limits without any further coagulation problems. Figure 3 shows the results of the liver function tests and the coagulation profile after liver transplant.

Numerous cases of cutaneous manifestations of thrombosis-associated afibrinogenemia have been reported in the literature.5 In our case, the first cutaneous symptoms appeared about 1 month after starting fibrinogen concentrate (Haemocomplettan P). This disturbance may be mainly due to deposition of circulating immune complexes in the blood vessels, thus leading to vasculitis. The roles of fibrinogen and interference with the immune system are also worthy of further scrutiny.

Our review of the literature6-9 revealed that transmission of blood coagulation disorder from liver donor to recipient could lead to brain hemorrhage and brain death in donors. There is no specific screening procedure recommended for detection of these rare inherited genetic disorders in deceased donors with the absence of medical or family history. Thromboelastography is a useful test for detection of coagulation disorders. It shows the clot’s tensile strength and its rate of formation and stability. Thromboelastography tracing should be considered as a reasonable examination in such deceased donors for coagulation studies. We also recommend that plasma samples should be collected from the donor at the time of organ procurement and also from the recipient immediately before liver transplant. These samples should be frozen and stored for later coagulation studies and further evaluation. 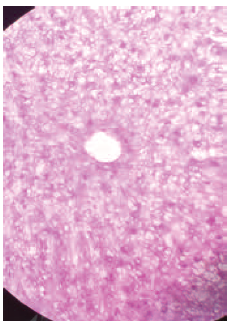 Figure 1. Donor Liver Histology From Needle Biopsy on the Day of Organ Procurement 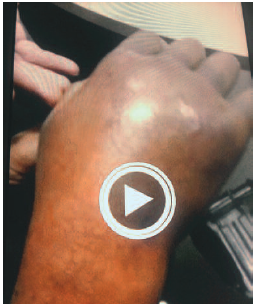 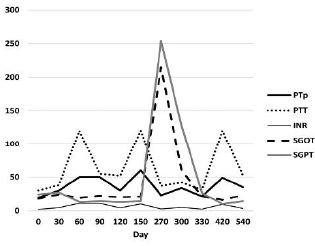