Intraductal papillary neoplasm of the bile duct (IPNB) is now considered to be a specific type of bile duct tumor. Unique characteristics of IPNB include slow progression of the disease through an adenoma-carcinoma sequence and multiple lesions, the so-called biliary papillomatosis.1 The mainstay of IPNB treatment is surgical resection, with the goal being the eradication of all tumors.2 Patients with biliary papillomatosis involving both lobes of the liver cannot be treated with liver resection. Therefore, the only way to cure these cases is liver transplant.3 Here, we present a case of biliary papillomatosis of the biliary tree and gallbladder that was successfully treated with repeated resection and liver transplant. This study was approved by our Institutional Review Board (HE571316), under the Office of Human Research Ethics at Khon Kaen University. Written informed consent was obtained from the patient for publication of this case report and any accompanying images.

In 2010, a 45-year-old woman sought care at our center after experiencing abdominal discomfort for 5 years. She had been healthy until the abdominal discomfort occurred and was not taking any medication on a regular basis. She had no history of viral hepatitis or parasitic infection. Physical examination revealed a 4-cm ill-defined globular-shaped mass in the right subcostal area. A computed tomography (CT) scan revealed only a papillary mass in the gallbladder (Figure 1A). Neither an intraductal mass nor an intrahepatic bile duct dilatation was detected. All serum laboratory tests and tumor markers were within normal limits except for slight elevation of serum alkaline phosphatase at 135 IU/L (reference range, 42-121 IU/L). She underwent radical cholecystectomy with regional lymphadenectomy. Gross examination of the specimen revealed an 11-cm papillary growth in the gallbladder (Figure 1B). The pathologic report showed intracystic papillary lesions with foci of carcinoma in situ (Figure 1C). The postoperative course was uneventful, and she had no further problems for 2 years.

Two years after the first operation, surveillance ultrasonography revealed intrahepatic bile duct dilatation of the left lobe of the liver. A CT scan demonstrated intraductal papillary tumors in the bile duct of segments 3 and 4 of the liver (Figure 2A). The patient was scheduled for exploratory laparotomy and left hepatectomy. In addition to the lesion depicted on preoperative imaging, intraoperative choledochoscopy during the operation revealed other discrete intraductal papillary tumors in the right anterior and right posterior hepatic ducts. We decided to perform left hepatectomy and curettage of the intraductal tumors in the right lobe of the liver. Gross examination of the specimen revealed a papillary growth in bile duct segments 3 and 4 (Figure 2B). The pathologic reports of all specimens indicated intraductal adenoma with moderate dysplasia (Figures 2C and 2D). There were no postoperative complications. Regarding residual tumors in the right lobe of the liver, given the benign nature of all lesions and the patient’s good performance status, we placed her on the liver transplant wait list.

The patient underwent a piggyback orthotopic liver transplant in July 2013. Because the intraductal neoplasm of the bile duct was multifocal, we performed extrahepatic bile duct resection and found a small intraductal lesion in the intrapancreatic portion of the common bile duct. We decided to curette this small tumor rather than perform a pancreaticoduodenectomy due to the complexity of the latter procedure. Gross examination of the specimen revealed multiple small intraductal lesions in the explanted right lobe of the liver (Figure 3A). Histologic examination revealed intraductal papillary neoplasm with moderate dysplasia (Figures 3B, 3C, and 3D). The patient had an uneventful postoperative course (with the exception of some intra-abdominal collection requiring relaparotomy and drainage) and was discharged on postoperative day 20. At a 40-month follow-up, the patient had normal liver graft function, and a CT scan showed no evidence of disease recurrence.

We have described a case of papillomatosis of the biliary tree and gallbladder successfully treated with radical cholecystectomy, left hepatectomy, and liver transplant.

Before the term “intraductal papillary neoplasm of the bile duct” had become common,4 this disease had been referred to by various names, one of which was “biliary papillomatosis” (due to its multiplicity). It is believed that IPNB progenitor cells are located in the peribiliary glands,5 which are distributed along the intrahepatic large bile duct, extrahepatic bile duct, gallbladder, and in the pancreas.6 Therefore, IPNB could potentially arise in any of these areas.7

The optimal treatment for IPNB is complete surgical removal of all lesions. Intraductal papillary neoplasm of the bile duct consisting of multiple lesions can cause problems due to incomplete surgical resection as there is a higher chance of positive margins and recurrence in the bile duct of the remnant liver.3,8 Resection of the whole biliary tree through liver transplant can be regarded as the only curative treatment.9 However, the problem with this approach is that the prognosis after liver transplant is poor if the tumors harbor foci of invasive carcinoma. Therefore, initial partial liver resection to eliminate the chance of there being invasive foci before liver transplant is a promising strategy to contend with this issue.3

To the best of the authors’ knowledge, there have been 11 reported cases of patients with biliary papillomatosis treated with liver transplant.3,9–14 In all of these cases, involvement was limited to the bile duct. We have presented the first case of papillomatosis with multifocal involvement in the intrahepatic bile duct, the extrahepatic bile duct, and the gallbladder. Our patient initially presented with only a gallbladder mass. Thus, she was initially diagnosed with papillary tumor of the gallbladder and underwent a cholecystectomy. When intraductal papillary lesions were discovered in the bile duct of the left lobe of the liver, we considered the possibility of multifocal IPNB. Consequently, we performed an intraoperative choledochoscopy to assess the bile duct of the right lobe of the liver.

Intraductal lesions discovered in the remnant liver should be sampled for pathologic evaluation for invasive lesions. Regarding the treatment of residual IPNB in the right lobe of the liver, the decision to perform liver transplant was difficult. The risks of surgery and postoperative immunosuppression and benefit of eradication of possible tumor progression should be taken into consideration. In this case, there was evidence of tumor progression in the left lobe of the liver within 2 years from the time of radical cholecystectomy when the CT scan was unable to detect any bile duct abnormality. The prognosis after resection of benign IPNB is far better than malignant IPNB.2,15 Moreover, liver transplant is contraindicated when the disease progresses to invasive lesion.

This case demonstrates the benefits of employing a surgical strategy of repeated resection followed by liver transplant in cases of multifocal IPNB. 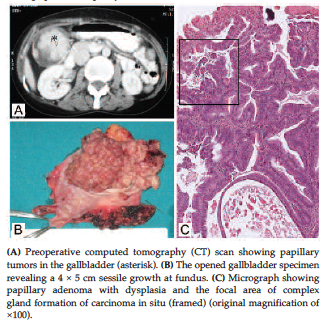 Figure 1. Photographs of Preoperative Imaging and Surgical Specimen and Micrograph of the Papillary Tumor of the Gallbladder 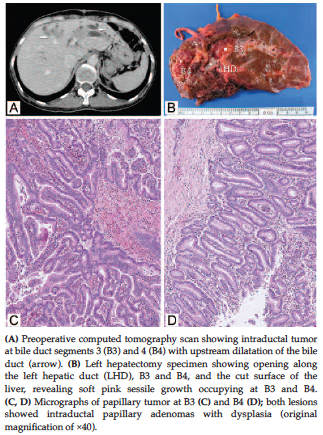 Figure 2. Photographs of Preoperative Imaging and Left Hepatectomy Specimen and Micrographs of the Intraductal Papillary Neoplasm of Bile Duct Segments 3 and 4 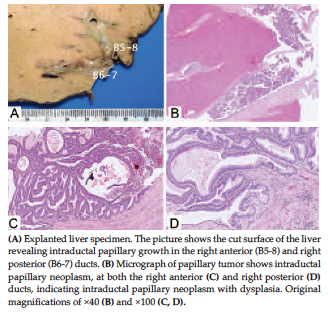 Figure 3. Photographs of Explanted Liver and Micrographs of the Intraductal Papillary Neoplasm of the Bile Duct of the Right Anterior and Right Posterior (B6-7) of the Liver