A 62-year-old male patient with diabetes underwent deceased-donor kidney transplant at our transplant unit. At reperfusion, a small and clinically not significant subcapsular hematoma was noted. The patient’s postoperative course was characterized by delayed graft function since the beginning but was further complicated on postoperative day 6 by evidence (shown at daily Doppler ultrasonography) of a wide increase of the hematoma. The hematoma, which was just visible before, was now leading to graft compression because it covered up to two-thirds of the cortical surface. The patient showed no hemo-dynamic instability and showed no significant drop in hemoglobin values. Capsulotomy was not performed because it was deemed too risky. The patient was given strict follow-up with Doppler ultrasonography and high-resolution imaging techniques (magnetic resonance imaging and computed tomography scan). In the following days, spontaneous resolution of the hematoma and progressive improvement of Doppler findings were observed, which preceded full recovery of graft function. Conservative management, in hemodynamically stable patients, seems to be a valid approach of this condition. By avoiding surgery or other interventional procedures, a conservative approach allows reduced risk of further complications. Strict monitoring with Doppler ultrasonography is a valid tool for follow-up, along with high-resolution imaging techniques such as magnetic resonance imaging and computed tomography to confirm diagnosis.

Renal transplant is recognized as the treatment of choice for end-stage renal disease. Several com-plications can arise at surgery or over the post-transplant period; among these, a subcapsular hematoma (SH) is believed to be rather uncommon.1 The treatment for this condition is still not clear as no systematic reviews have focused on this topic. Indeed, different options have been proposed, including conservative management,1 interventional procedures such as percutaneous drainage,2 or more often surgical capsulotomy.3 The choice of how to approach SH is crucial for both patient and graft outcomes because of the risk of further patient morbidity and even graft loss. Here, we describe our experience of an extensive SH aroused post-operatively and causing a prolonged delayed graft function (DGF), which was successfully treated with a conservative approach.

A 62-year-old male patient with end-stage renal disease because of diabetic nephropathy was admitted to our center for deceased-donor renal transplant (patient features are described in Table 1). The graft, which was carefully evaluated at bench surgery and showed no pathologic findings, was subsequently implanted in the recipient’s right iliac fossa. Transplant intervention was uneventful, and appropriate renal perfusion was observed after declamping. A small SH (more or less 1 cm in diameter) was then noted on the antihilar cortex of the graft, which did not enlarge during surgery. Despite optimal reperfusion, the patient did not have prompt urinary output. In view of the stability and the small size of the SH and the potential risks of complications, a capsulotomy was not elected as a treatment option. A surgical drain was left in place, and the transplant surgery was completed with a plan for close postoperative monitoring (transplant details are described in Table 2).

The early postoperative course was normal, immunosuppressive therapy was administered as per local practice (Table 2), and no signs of bleeding were recorded. Doppler ultrasonography on posto-perative day 1 showed normal vascular perfusion with no significant changes of the SH. The Doppler findings were similar over the next several days. Because there was no recovery of renal function, hemodialysis was prescribed starting on post-operative day 3. A routine ultrasonography on postoperative day 6 showed, in the absence of any symptoms, a wide enlargement of the SH extending up to two-thirds of the antihilar cortex and exerting a marked compression on the underlying parenchyma.

A concurrent Doppler study revealed elevated resistive indexes (0.82-0.91 ratio) with a preserved venous flow (Figure 1). A noncontrast enhanced com-puted tomography (CT) scan was also performed to confirm diagnosis (Figure 2). The patient was hemodynamically stable and asymptomatic, and blood pressure was normal with systolic pressure ranging between 120 and 140 mm Hg and diastolic pressure ranging between 60 and 80 mm Hg, with no recorded drop in hemoglobin values. In view of the lack of symptoms but the impairment of renal function, surgical exploration was deemed too risky. A decision was made to continue with a conservative approach. Because of graft dysfunction, hemodialysis was continued, and a percutaneous biopsy was excluded.

The patient remained hemodynamically stable, and no active bleeding was seen from the surgical drain over the next several days. Oligoanuria persisted until postoperative day 28 at which time a progressive increase in daily urine output and a decrease in serum creatinine levels were observed. Hemodialysis was discontinued on postoperative day 27 (a total of 11 dialytic treatments were performed). Ultrasonography, performed daily, showed progressive improvements from previous findings, with an almost complete resolution of the SH (Figure 3) and reduction of graft resistive indexes (ratio of 0.59-0.66), which preceded full recovery of graft function. Serum creatinine levels progressively normalized. To confirm an optimal perfusion within the graft, a contrast-enhanced magnetic resonance imaging was performed (Figure 4). The patient was discharged on postoperative day 40 in good condition; his serum creatinine level was 2.0 mg/dL.

Here, we describe our experience of a prolonged DGF in a diabetic kidney transplant recipient who also had an SH, which was noted at surgery but increased extensively during the postoperative course (postoperative day 6) and which was successfully treated with a conservative approach. Delayed graft function is a well-known complication of kidney transplant; its incidence does not differ significantly in kidney transplant recipients with versus without diabetes.4,5 In our patient, the prolonged DGF time was most likely related to the effects of the SH on graft parenchyma. Several causes can lead to the onset of SH. These can be classified as traumatic (eg, renal injuries at organ procurement,1,6 allograft trauma in transplant patients,3,7 and trauma during posttransplant biopsy8) or not traumatic, which are generally related to specific medical conditions causing spontaneous bleeding (eg, pancreatitis and warfarin therapy). In some cases, the cause is unknown, especially in those who have late onset of SH after transplant.9

With the exclusion of active bleeding requiring emergency surgery, the worst complication is “Page syndrome,” a well-known condition caused by renal parenchyma compression, whose typical presen-tation is distinguished by acute impairment of renal function, anuria, and hypertension.10 The generally accepted pathophysiology of this phenomenon is based on the hypoperfusion, ischemia, and activation of the renin-angiotensin-aldosterone system second-ary to compression.11 More recently, rather than activation of the renin-angiotensin-aldosterone system, an interstitial nephritis due to inflammation has been proposed, with mycophenolate mofetil having some role in preventing the inflammation and thus the hypertension.12 Our patient had a pretransplant history of well-compensated blood hypertension, and no significant changes in blood pressure were recorded over the posttransplant period. In addition, per local practice, he underwent immunosuppression with mycophenolate. However, we are not able to state whether this had a protective role.

Finding the best treatment is crucial for the outcome. Salgado and associates1 successfully managed an extensive SH that had been aroused intraoperatively at transplant. The group reported no need for reintervention; however, the patient required a strict follow-up with Doppler ultrasono-graphy until the spontaneous resolution of the SH, which was followed by recovery of graft function.

In our case, the late increase in the size of the hematoma, along with the already recognized DGF, the lack of blood hypertension, drop in hemoglobin values or episodes of hemodynamic instability, the lack of finding a source of active bleeding,6,7 and the risk of further complications with surgery (especially of intraoperative and postoperative bleeding due to the friability of renal parenchyma when degloved) led us to exclude the need for surgical exploration.

For similar cases, we believe that close monitoring of both vital signs and the graft by daily ultraso-nography with Doppler flow is the most appropriate and cost-efficient approach, as spontaneous resolution of the SH can occur with a full recovery of renal function. Computed tomography scan and magnetic resonance imaging are more expensive diagnostic examinations, but they are extremely useful for addressing diagnosis and for detecting normal vascular perfusion within the graft. Surgery should be reserved to cases with confirmed Page syndrome, those with hemodynamic instability, and those with significant decreases in hemoglobin values or when a trend toward an increase in size of the SH is detected. The lack of large cohort studies with well-defined evidence prevents the definition of the best approach to follow; therefore, we may for now need to rely on the experiences of single-center studies. Further studies are needed to optimize and formulate a diagnostic and treatment algorithm for patients with this complication after kidney transplant. 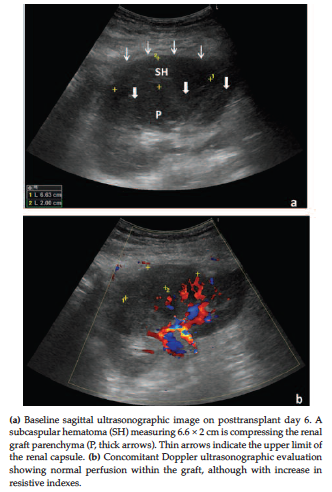 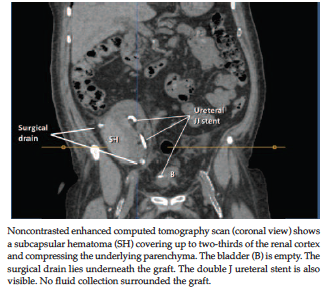 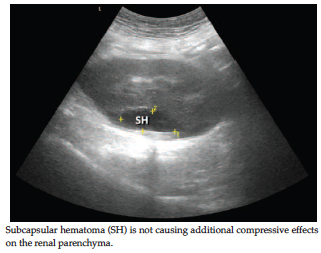 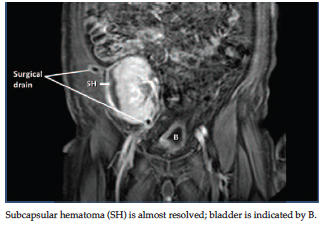 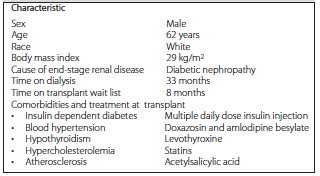 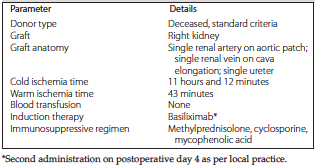