Objectives: The aim of this research was to determine the attitudes of transplant-related health care workers and the local population of Montenegro toward organ donation and transplantation.

Materials and Methods: Our study included 200 transplant-related health care professionals (from the Clinical Center of Montenegro, the only transplant hospital in the country) and 200 volunteers from Podgorica (the capital of Montenegro). Their attitudes were evaluated using an anonymous, self-administered, multiple-choice questionnaire.

Results: Most health care workers would donate their organs only on specific occasions (43.6%), whereas the general population was divided between willingness to donate only on specific occasions and the need to consider the decision of donating (34.6% each). Both groups of respondents predominantly claimed that they would donate their organs to any potential recipient, regardless of sensory or physical disability. A positive opinion regarding the promotion of organ donation, as well as the need for legal regulation of the transplant process, was noted in both groups of responders.

Conclusions: There is a need to increase the generosity of the Montenegrin population and its health care workers regarding organ donation at all times and not exclusively on specific occasions.

The universally accepted bioethical attitude toward tissue and organ donation after death describes it as a completely justified act with the intention to preserve human health and life.1 In Montenegro, all legal, ethical, and medical requirements necessary to start a transplant program were fulfilled in September 2012. Previously, all Montenegrin patients who required transplant procedures were referred to regional transplant centers.2 Donations after death sparked a significant ethical dilemma in the Montenegrin population, mainly because of the definition of brain death.

Differences in medical, legal, and economic regulations of the transplant process perhaps stem from cultural differences between countries,3 which also influence individual attitudes and opinions. For example, the general population of the Far East hopes to keep their bodies intact, inspired by Confucianism.4 A good example of variations in donation regulations in different countries is the Organ Transplant Law in Japan, which allows Japanese individuals to choose their own definition of death for donation purposes. That is, either brain death or cessation of cardio-respiratory function can be considered as the reason of their death pronouncement, as chosen by the individual.5 There are also different opinions regarding the possession of organs after death, that is, whether they belong to the general population or their use should be regulated by the individual before death.6 The attitude of health care workers toward organ donation is an important segment in the acceptance of transplant programs in a specific social environment, providing a potential source of positive opinion that can be transferred to the general population.7

The aim of this research was to determine the attitudes of transplant-related health care workers and the local population of Montenegro toward organ donation and transplantation, with an emphasis on the circumstances under which they would donate their organs.

Table 2 shows the reported comprehension of the term “organ donation” by the responders, their willingness to donate organs, and the desirable organ recipients related to sensory or physical disability.

A positive opinion regarding the promotion of organ donation was noted in 70.8% of health care professionals and in 65.9% of people in the general population, making it the most frequent positive answer in both groups of respondents, although not significantly different (P = .601). In addition, most respondents from both groups stated that legal regulation of the organ donation and transplant process is required. However, as shown in Table 3, a lack of opinion regarding this issue was significantly more frequent in the general population (12.8%) than in health care professional group (5.1%; P = .012).

The primary problem in the transplant process is the disproportion between the number of donated and required organs.8 To increase the number of organ donors, it is necessary to promote the transplant process in the community through improving what is known about organ donation in the general pop-ulation. Health care professionals play an important role in the development of the public’s opinion on transplant, through their frequent contact with all segments of the society.9 Spain has been the world leader in the rate of donations after death for more than 2 decades.10 Spanish experts state that the role of transplant coordinators (medical doctors supported by nurses) is important in the promotion of deceased donations in the community, through close attention to mass media.11

Nordfalk and associates conducted a telephone survey in a representative part of the Danish population and found that most Danes had a positive (or very positive) attitude toward donation (91.9% of their study sample), with 85% willing to donate their own organs.12 Here, we showed that the Montenegrin population was more hesitant when it comes to organ donation (only 17.9% stated that they would donate their organs at all times).

In their study of 361 health care workers in a Spanish hospital with a developed organ transplant program (with 309 completing the survey), Zambudio and colleagues7 found that 70% had a favorable attitude toward organ donation. The group found that medical doctors had a significantly more favorable attitude than ancillary personnel (86% vs 33%), and 62% of nurses had a positive attitude toward donation. The authors concluded that a critically low level of support in the ancillary personnel may translate to a negative influence in the general population, despite the positive attitude of medical doctors and nurses.7 McGlade and Pierscionek surveyed 100 preregistered nurses in Northern Ireland and showed that 33% had already agreed to be organ donors and an additional 35% were considering becoming organ donors.13 Bogh and Madsen showed that, in Denmark, 11% of all examined health care professionals were against organ donation.14 Their results also showed that doctors were more positive toward organ donation than nurses. These results were similar to those shown in a report of Chinese health care professionals.15 In a mixed sample of hospital workers in Spain (both health care workers and non-health care staff in a tertiary referral hospital with a transplant program), Rios and associates showed that 82% were favorable toward living liver donations, with only 15% favorable if it were not a related donation.16 Health care workers in Montenegro, as shown here, preferred their donations to be linked to a specific occasion (43.6%) unlike the Danish and the Northern Irish medical professionals. However, Denmark and Montenegro displayed a similar percentage of health care workers unwilling to donate their organs. Also, the low percentage of Spanish health care workers willing to donate their organs to unrelated patients was similar to the percentage of Montenegrin health care workers willing to donate at all times (11.3%). In the traditional Montenegrin milieu, the family is the primary pillar of the society, so the term “donation on specific occasions” in our questionnaire can be understood as donating to relatives in need.

More than one-half of medical and nursing students at Ankara University in Turkey expressed a positive attitude toward organ donation, according to a study by Kocaay and associates.17 Most students stated that organ donation should be promoted through public education and mass media campaigns.17 A study on medical students in Karachi, Pakistan showed that 44.9% were willing to donate their organs, and 56.3% would donate if their relative was in need of an organ.18

Several opinions are usually reported to be the cause of a negative attitude toward donation after death, including fear of death, uncertainty regarding the diagnosis of brain death (specifically, the fear of organs being removed before the onset of brain death), the suspicion of organ misuse, the lack of information about the transplant process, religious beliefs,19 and rumors about organ trafficking.20 Regarding living organ donations, the most common reason for a negative attitude is the uncertainty about the donor’s health and quality of life after donation.21

Continuous medical training offers transplant coordinators and their teams a chance to improve their knowledge and actions, enabling the transplant process to prosper.21,22 Nurses are frequently in close contact with patients and their families, thus potentially influencing the general population. Education programs aimed at improving nurses’ knowledge are necessary to increase their positive attitude toward organ donation, subsequently generating a positive impact on the donation rate.23 Goz and associates stated that there is a need to reform the curricula in medical and nursing schools to provide adequate information on organ donation to future doctors and nurses.24

We found that Montenegrin transplant-related health care workers are similar to the local population regarding willingness to donate organs. Most health care professionals and non-medical workers would consider donating their organs or would donate on specific occasions. In addition, most health care workers and local individuals felt that organ donation should be promoted and regulated by law. These results indicate the need to increase the generosity of the Montenegrin population and health care workers regarding organ donation at all times and not exclusively on specific occasions. Given the fact that this cross-sectional study was performed in the only transplant center in Montenegro, future studies should focus on other health care facilities and include a bigger sample of health care pro-fessionals and local individuals to provide an adequate perspective of the current attitude toward organ donation and transplant. 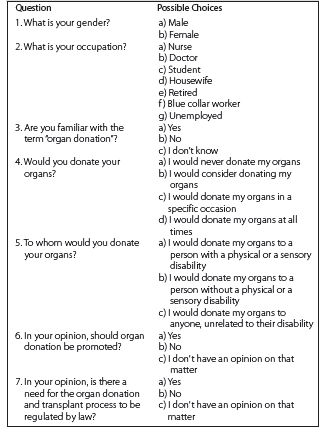 Table 1. Questionnaire Used in the Study

Table 2. Comprehension of the Term “Organ Donation,” Willingness to Donate Organs, and the Desirable Organ Recipient Related to Sensory or Physical Disability 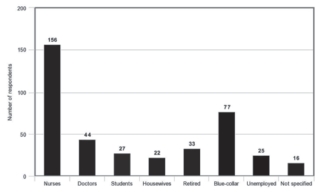 Figure 1. Occupation of the Respondents