Objectives: Our goal was to investigate the correlation between indocyanine green test results and imaging parameters in living liver donor candidates.

Indocyanine green (ICG) is a water-soluble, fluo-rescent tricarbocyanine dye that binds to plasma protein and is distributed in the blood.1 Extraction from the blood occurs exclusively by the liver, with selective uptake across the sinusoidal plasma membrane and removal via a carrier-mediated mechanism2; ICG is excreted into the bile without extrahepatic excretion or metabolism.3 The ICG test is most commonly used for dynamic quantitative assessment of liver function, especially in cases of major liver resection, including living-donor liver transplant.

A quantitative liver function test, including the ICG test, relies on the clearance principle, in which hepatic clearance is the product of liver blood flow and liver extraction capacity.2 Doppler ultraso-nography is routinely used to preoperatively assess the vasculature in living-donor liver transplant and has been proven to be a reliable technique for esti-mating liver blood flow.4,5 Computed tomo-graphy (CT) is a standard technique to pre-operatively evaluate liver volume in potential living donors.6 Functional liver volume reflects the liver extraction capacity in healthy individuals with normal hepatic function.2

We hypothesized that, among healthy living donors, the ICG test could reflect portal vein (PV) flow as a component of liver blood flow by Doppler ultrasonography and functional liver volume by CT volumetry that excludes nonmetabolic liver tissue such as fat fraction.

The aim of our study was to investigate the correlation between ICG test results and imaging parameters, such as PV flow by Doppler ultraso-nography and functional liver volume by CT volumetry, excluding nonmetabolic liver tissue (eg, fat fraction), in healthy donor candidates.

Study population
Our institutional review board approved this retrospective study and waived the requirement for informed consent. We consecutively included a total of 219 healthy donor candidates who were evaluated by Doppler ultrasonography, CT scan, percutaneous liver biopsy, and the ICG test between January 2011 and July 2011 to determine their suitability to serve as living liver donors. There were 136 men (mean age [± standard deviation] of 28.6 ± 8.9 y; range, 16-59 y) and 83 women (mean age of 33.3 ± 10.5 y; range, 16-58 y), with an overall mean age of 30.4 ± 9.8 years (range, 16-59 y). The demographic data of the living donor candidates are summarized in Table 1.

Doppler ultrasonography techniques and analysis
Hepatic ultrasonographic examinations, including Doppler studies, were performed by board-certified abdominal radiologists using a Sequoia 512 machine (Acuson Siemens, Mountain View, CA, USA) equipped with a 1- to 4-MHz curved-array transducer. The main PV diameter was measured at the point from the porta hepatis to the right PV/left PV bifurcation. Standard Doppler parameters were measured by adjusting velocity scale and angle correction. The time average velocity of the PV (PV TAV, cm/s) was obtained within the center of the main PV where laminar flow is greatest, setting its dimension as wide as ≥ 50% of the vessel diameter, at the end of expiration with a spontaneous short breath-hold. The time average flow (TAF, cm3/min) of the PV was calculated using the following equation: PV TAF = PV area (cm2) × PV TAV (cm/s) × 60 (where PV area was determined by π × [PV diameter/2]2). To minimize measurement error, all parameters were measured 3 times and were averaged for the analysis.

We used computer-aided hepatic volumetry on PVP CT images. The initial hepatic outline was detected through the sequential application of seeded region growing onto level-set speed images, which were generated as a map inversely proportional to the gradient magnitude.7 The Malladi level-set method8 was adopted for level-set propagation. A rolling ball algorithm and the removal of false-positive findings were then used to enhance the hepatic boundary more accurately. The liver volume was calculated automatically.

Indocyanine green test
The ICG test was performed by rapid intravenous injection of 0.5 mg/kg body weight of ICG (Dong-in Dang Pharmaceutical Co., Siheong, Korea). Blood samples were drawn from an antecubital vein opposite to the site of injection, before and 15 minutes after ICG administration. After centri-fugation, each sample was measured at 805 nm using a spectrophotometer (Hitachi, Kyoto, Japan). Indocyanine green test reten-tion rate at 15 minutes (ICG R15) was expressed as a percentage of the fluorescent dye retained at 15 minutes.

We evaluated the correlations between ICG R15 and imaging parameters in living liver donor candidates with well-preserved liver function. In our study, PV TAF, FFLBWR, and PV TAF × FFLBWR were significantly correlated with ICG R15.

The ICG retention test is a quantitative test that represents both liver blood flow and functional hepatic reserve. In our study, when we multiplied PV TAF by FFLBWR, this parameter showed moderate correlations with ICG R15 versus the weak correlations shown for both PV TAF and FFLBWR. Therefore, we suggest that PV TAF, as a surrogate of total liver flow, multiplied by FFLBWR, reflecting functional liver reserve in healthy subjects with well-preserved liver function, improves the correlation with ICG R15.

The ICG retention test is commonly used, especially in the East. However, facilities to measure ICG R15 are not readily available in all countries worldwide. In addition, the ICG test requires additional invasiveness and cost. In contrast, ultrasonography and CT are routinely used for preoperative evaluations to determine appropriateness of candi-dates as potential living donors. In this respect, it may be valuable to acknowledge that hepatic blood flow, estimated by Doppler ultrasonography, and functional liver volume, measured by CT volumetry modified according to the degree of steatosis, can reflect the ICG test. We suggest that the correlation between imaging parameters and ICG test results may help clinicians decide appropriateness of a candidate as a living liver donor, especially in some centers where facilities to measure ICG R15 are not available.

Our study has some limitations. First, we did not include hepatic arterial flow by Doppler ultrasonog-raphy in our measurements of liver blood flow. Total liver blood flow is calculated as the sum of hepatic arterial flow and PV flow.5 However, clear visualization of the hepatic artery and Doppler measurements of hepatic arterial flow are possible for only a limited population because of their deep location, where ultrasonography signals are dis-turbed to a large degree with scatters and clutters; the small size, close to the spatial resolution of the conventional convex transducer; and large vari-abilities in anatomic configurations of the vessels.4,12 In contrast, portal blood flow estimation by Doppler ultrasonography has been proven reliable and reproducible in both healthy subjects and cirrhotic patients.13,14 Therefore, we used portal blood flow as a surrogate of liver blood flow. Second, we included only healthy living liver donor candidates; therefore, the results cannot be generalized to patients with liver disease. Third, we did not consider the relationship between the ICG test and static assessments of liver function, including excretory function (total bilirubin) and synthetic function (albumin and prothrombin time). Indocyanine green and bilirubin bind to the same carrier system in hepatocytes; thus, the ICG transport capacity is competitively inhibited in cases of hyperbilirubinemia.1,2 However, the patients enrolled in this study were healthy subjects with normal liver function. We suspect that the ICG test solely relied on hepatic clearance, consisting of liver blood flow and liver extraction capacity, in our study population.

In conclusion, imaging parameters, including PV TAF, FFLBWR, and PV TAF × FFLBWR, were significantly correlated with ICG R15 in healthy subjects recruited from a pool of living liver donor candidates. 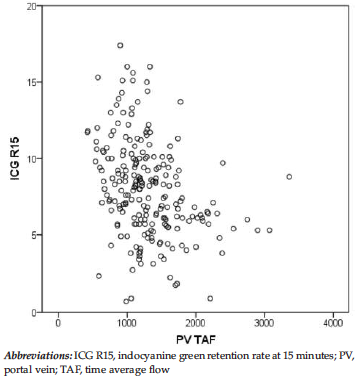 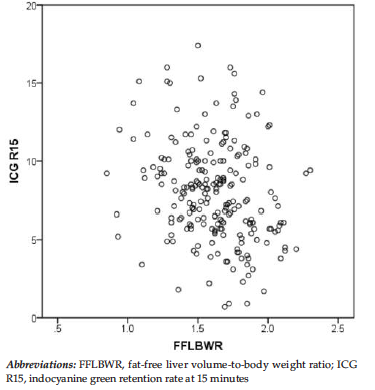 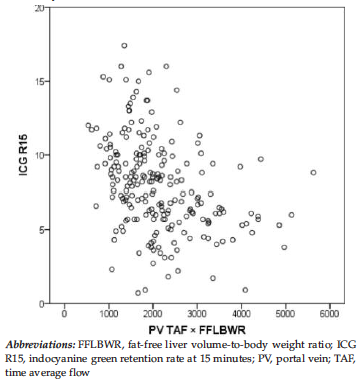 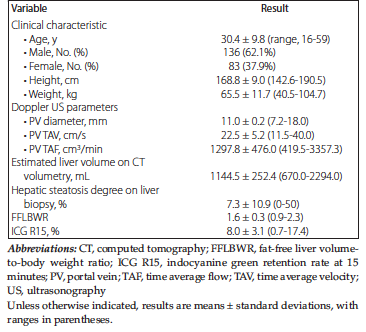 Table 1. Demographic Data and Summary of Results in the 219 Living Liver Donor Candidates