Materials and Methods: This prospective, one arm, single-center study included 238 patients with at least 12 months posttransplant follow-up and no rejection episodes in the last 3 months. Conversion from twice-daily to once-daily formulation was based on a 1:1 ratio.

Results: The mean tacrolimus dose was 4.7 ± 2.7 mg/day preconversion versus 4.9 ± 3.2 mg/day postconversion (P = .8). The mean tacrolimus level was 7.4 ± 3.4 versus 6.1 ± 2.8 ng/mL (P = .75). Of total patients, 45% were maintained on a tacrolimus dose of less than 2 ng/dL. Renal function was comparable before and after conversion (mean serum creatinine was 1.25 ± 0.88 vs 1.23 ± 0.78 mg/dL; P = .9). The incidence of biopsy-proven acute rejection was 19.7% preconversion versus 4.2% postconversion. Graft and patient survival rates were comparable between the 2 tacrolimus formulations. Once-daily tacrolimus also had favorable effects on blood pressure, lipid profile, and glucose tolerance.

Conclusions: Conversion from conventional tacrolimus (twice daily) to once-daily tacrolimus may be a valuable option with comparable patient and graft survival and may lead to improved adherence that may be reflective of better long-term results. It should be considered for de novo immunosuppression among living-donor renal allotransplant recipients.

Tacrolimus is a potent macrolide immunosuppressive agent that is highly effective in the prophylaxis of transplant rejection and in the treatment of allograft rejection in patients resistant to treatment with other immunosuppressive agents as a rescue.1 After the initial approval by the Food and Drug Administration in 1994 of tacrolimus for prophylaxis of graft rejection after liver transplant, it is now indicated for rejection prophylaxis in kidney allograft recipients in the European Union.2 In adult kidney transplant recipients, tacrolimus has typically been prescribed as a twice-daily capsule with a starting dose of 0.2 to 0.3 mg/kg/day.3

Given the proven effectiveness of tacrolimus in preventing posttransplant graft rejection, patient adherence to the prescribed regimen becomes a critical factor in improving graft survival outcomes. A 2007 meta-analysis reported that the risk of nonadherence to immunosuppressive regimens was highest in renal transplant recipients.4 Several studies have since reported on various factors that can influence adherence in transplant recipients, including a 2012 study that showed a strong inverse association between the number of immunosup-pressive medications utilized per patient and the proportion of patients who are adherent to therapy.5 Furthermore, dosing frequency and regimen com-plexity have also been associated with reduced adherence.6 Twice-daily, immediate-release formu-lations still constitute the majority of immunosup-pressant prescriptions in the United Kingdom, and there is still a great unmet need in allograft recipients for reduced pill burden.7

In April 2007, the European Commission granted European Union-wide marketing authorization for Advagraf (Astellas Pharma, Deerfield, IL, USA), a once-daily, prolonged-release formulation of tacro-limus. The topic of patient adherence was addressed in the public summary of the European public assessment report for Advagraf, which noted that the once-daily formulation “can help patients stick to their treatment” (ie, improve adherence).8 The report statement is closely aligned with results of previous studies demonstrating that once-daily versus twice-daily dosing can lead to greater adherence to a prescribed regimen.6,9,10 With regard to Advagraf and Prograf (the twice-daily formulation; Astellas Pharma Europe Limited, Middlesex, UK), a 2013 randomized controlled study reported that the proportion of patients who were adherent to the prescribed regimen was 88.2% and 78.8%, respectively (P = .0009), corroborating the inverse relationship between dose frequency and adherence in renal transplant recipients.11

Numerous studies have reported that suboptimal adherence to immunosuppressive treatment can increase the risk of late acute rejection and graft loss.12-14 For instance, a 2004 meta-analysis was conducted regarding the frequency and effect of nonadherence to immunosuppressive regimens in renal transplant recipients. The study found that the odds of graft failure in nonadherent patients were 7.1 times higher than in patients adherent to therapy.15 Of studies included in the meta-analysis, the most common definition of nonadherence was missing, forgetting, or altering a dose at least once per month. A 2009 study on patient adherence to immunosup-pressive regimens after renal transplant divided patients into quartiles based on their medication-possession ratio (MPR) and analyzed the incidence of graft failure in each quartile.13 The upper MPR quartile boundaries over the course of the study were 0.811, 0.951, and 0.998 for the first, second, and third quartiles in ascending order of adherence. Compared with patients in the highest-adherence quartile (described as “excellent” adherence in the study), patients in the third (“fair”) and lowest (“poor”) quartiles had increased risk of graft failure, with Cox proportional hazard ratios of 1.63 and 1.80, respectively. Among survivors at year 1, graft failure in the subsequent 2 years was 11.5% in the “poor” compliance group versus 7.4% in the “excellent” compliance group (P < .0001). Similarly, a 2014 study by Spivey and associates found a significant association between higher MPR and reduced graft-failure risk in a retrospective analysis of 31 913 renal transplant patients in the US Renal Data System.14

In the present study, we aimed to evaluate the implications (safety and efficacy) of switching renal transplant recipients from an immediate-release twice-daily tacrolimus formulation to prolonged-release once-daily tacrolimus.

Design and sample size
Our study included 238 living-donor renal allograft recipients (treated at the Urology and Nephrology Center, Mansoura University, Mansoura, Egypt). We designed the study based on the concept of bioequivalence. All kidney transplant recipients received oral administration of twice-daily tacrolimus with a starting dose of 0.10 to 0.15 mg/kg/day on the day of transplant, followed by twice-daily dosing at 10:00 AM and 10:00 PM. The target tacrolimus trough level was 5 to 8 ng/mL. We enrolled patients who had stable tacrolimus trough levels, stable kidney function, and no rejection episodes over the previous 3 months. Twelve months after transplant, patients were switched from twice-daily tacrolimus to oral administration of once-daily tacrolimus with the same milligram-per-milligram (1:1) daily dose, starting at 10:00 AM on the next morning’s dose. Preconversion and postconversion data from clinical and laboratory assessments were used to assess compliance (adherence), blood pressure, drug toxicity and rejection (biopsy-proven acute rejection), renal function, proteinuria, uric acid, lipid profile, and diabetes mellitus. Patient and graft survival rates were assessed.

Ethics approval
All procedures performed in this study involving human participants were in accordance with the ethics standards of the institutional research com-mittee of the investigating hospital (Institutional Review Board number MURA 2014/383) and the 1964 Helsinki Declaration and its later amendments or comparable ethics standards.

The mean tacrolimus dose was 4.7 ± 2.7 mg/day preconversion versus 4.9 ± 3.2 mg/day at 2 months postconversion (P = .8). The mean tacrolimus trough level was 7.4 ± 3.4 versus 6.1 ± 2.8 ng/mL (P = .75). Renal function was comparable both before and after conversion (mean serum creatinine was 1.25 ± 0.88 vs 1.23 ± 0.78 mg/dL; P = .9) (Table 1). The incidence of biopsy-proven acute rejection was 19.7% pre-conversion versus 4.2% postconversion (P = .001). Graft and patient survival results were comparable between the 2 tacrolimus formulations. Once-daily tacrolimus also had favorable effects on blood pressure and lipid profile and resulted in a higher percentage of patients being rejection free (Table 2). As shown in Table 3, 44.96% of patients were maintained on tacrolimus dose levels of less than 2 mg/dL, with stable trough levels postconversion (Figure 1).

Tacrolimus is the most common drug used in transplant recipients.16 It was first developed as an immediate release formulation, requiring twice-daily dosing. Lifelong immunosuppression is necessary to maintain allograft function in transplant recipients; however, nonadherence is associated with graft failure.17 The first prolonged-release formulation of tacrolimus was developed with the aim of improving adherence to treatment by reducing tacrolimus from twice daily to once daily. Comparative studies on twice-daily (Prograf) versus once-daily (Advagraf) tacrolimus demonstrated similar efficacy and similar tolerability profiles, although systemic tacrolimus exposure was reduced with the once-daily formulation.18 In our study, the once-daily formulation proved to be safe, with serum creatinine levels stable at conversion and at 18-month follow-up. The incidence of biopsy-proven acute rejection episodes after conversion was also significantly reduced in our patients, as was the overall incidence of acute rejection in our center (Mansoura Urology and Nephrology Center, comprising 3000 transplant patients), showing about 20% in the early post-transplant period and decreasing significantly on follow-up. Patients enrolled in this study had stable tacrolimus trough levels and stable kidney function before conversion. After conversion, tough level was more frequently monitored to overcome the fluctuation in the drug level caused by the effects of pharmacokinetic and pharmacodynamic changes. This is in agreement with other studies that conc-luded that once-daily tacrolimus in kidney transplant can lead to not only better compliance but also better long-term graft and patient outcomes.19,20

Our study’s strength was based on the crossover design to reduce confounding effects of pharma-cokinetic and pharmacodynamic changes over time. Tacrolimus levels were stable during conversion from twice-daily to once-daily tacrolimus, which was confirmed by other studies showing that, phar-macokinetically and pharmacodynamically, con-version from twice-daily to once-daily tacrolimus is safe in kidney transplant patients, with minimal variance between drug levels and degree of immunosuppression.21,22

Finally, we found improved adherence, lipid profile, and blood pressure control postconversion with comparable graft and patient survival results. These results agree with previous data.19 It is also important to mention that, in a single study that performed a cost analysis of switching, there are cost benefits of changing to a once-daily formulation of tacrolimus.23

Conversion from conventional twice-daily tacro-limus to once-daily tacrolimus in stable kidney transplant recipients may be a valuable option and should be considered for de novo immunosup-pression among living-donor renal allotransplant recipients, with observed trends in improved adherence, lipid profile, hypertension, and diabetes and with comparable graft outcomes.

Table 1. Laboratory Values Before and After Conversion 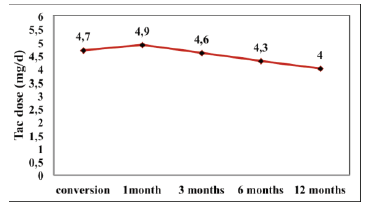