Materials and Methods: Our retrospective analyses included 125 adult patients who underwent deceased-donor kidney transplant. Delayed graft function was diagnosed if at least 1 dialysis treatment was required during the first week posttransplant according to Perico’s definition.

Conclusions: Efforts should be focused on limiting cold ischemia time and associated injury to reduce occurrence of delayed graft function and conse-quently improve long-term graft survival in kidney transplant recipients. Optimization of posttransplant renal function with the help of new technologies, such as pulsatile perfusion, could be crucial for minimization of cold ischemia time.

However, the increased demand for organs has led to a lack of donor grafts and to the resulting growth on wait lists. The crisis in organ supply has led to use of extended criteria donors, resulting in higher rates of delayed graft function (DGF), increased risk of acute rejection episodes, and short- or long-term kidney dysfunction.2 It is estimated that the relative risk of transplant failure for recipients of extended criteria donations is greater than 69% compared with recipients of standard organ donations.3

Delayed graft function is defined as a condition characterized by the need for at least 1 session of postoperative dialysis during the first 7 days after transplant.4 Delayed graft function is a frequent complication in deceased-donor kidney transplant procedures, with an incidence ranging from 10% to50% among different centers.5 The US transplant database showed that 50% of patients with DGF begin to recover renal function on day 10 after transplant, whereas 33% of patients recover between days 10 and 20 and 10% to 15% after day 20. In addition to acute complications associated with renal failure, the development of DGF is associated with an increased risk of chronic nephropathy and a reduced survival of the graft.6

Understanding the mechanisms of DGF means addressing the complexity of the contributing factors, including perioperative management and both donor and recipient characteristics. Delayed graft function is caused by multiple interactions of events leading to ischemia-reperfusion injury. Depletion of oxygen and nutrients can lead to the accumulation of various anaerobic metabolism products and to a reduction in the expression of cytoprotective genes (endothelial growth factor, heme oxygenase), resulting in less adaptive response to the graft. Various strategies focused on donor management, organ preservation, and recipient management have been proposed to prevent ischemia-reperfusion injury. However, DGF remains a main obstacle to successful outcomes after kidney transplant.

An accurate prediction model for identifying high-risk transplant recipients does not exist.7

For this reason, it may be useful to identify modifiable and nonmodifiable factors affecting DGF occurrence. In particular, the impact of cold ischemia time (CIT) on kidney transplant outcomes needs to be clarified as contrasting results are shown in the literature.8,9

The purpose of this retrospective study was to identify risk factors for DGF, particularly those associated with perioperative management, including CIT, and nonmodifiable recipient-related and donor-related factors.

After institutional review board approval, 130 patients who underwent kidney transplant from deceased donors between 2011 and 2014 were screened for inclusion in this retrospective study. Exclusion criteria were age < 18 years, body mass index ≥ 30 kg/m2, and retransplant. All transplants were from standard brain-dead donors. All kidneys were preserved with the standard cold storage technique. Machine perfusion was not performed in any donor kidneys.

Anesthesiologic care was standardized according to our local protocol for kidney transplant. General anesthesia was induced with propofol (2 mg/kg), fentanyl (1-3 μg/kg), and cisatracurium (0.15 mg/kg).

Maintenance was guaranteed by sevoflurane at guided bispectral index concentrations and remi-fentanil in continuous infusion. Patients were ventilated in volume-controlled mode with a “tidal” volume of 6 to 8 mL/kg and a respiratory rate of 10 to 14 breaths/minute to levels close to 35 mm Hg. Central venous pressure was maintained from 10 to 14 mm Hg during the surgical procedure by administration of crystalloids. Dopamine was given (at infusion rate of 2-5 μg/kg/min) when mean arterial pressure was less than 70 mm Hg. The use of human albumin at 20 g/L was allowed in the presence of clinically documented hypoalbuminemia.10 Hemoglobin values up to 10 g/dL were ensured by red blood cell transfusion. Based on neuromuscle monitoring, additional doses of cisatracurium were administered to maintain adequate neuromuscular block (posttetanic count < 5). Patient temperature was maintained in the normal range by the administration of hot liquids and heater devices (Bair Hugger model 505, Arizant Health Care Inc., St. Paul, MN, USA). During surgery, the postoperative analgesic plan was started with paracetamol 1 g and morphine 0.6 mg/kg, with additional doses of 1 to 2 mg when needed. Upon urethral anastomosis, furosemide (2 mg/kg) and mannitol 18% (100 mL) were administered.

At the end of surgery, interruption of anesthetic gas administration and safe extubation were performed when neuromuscular activity recovered as shown by a train-of-four of 100%.

After patients awoke, they were monitored for about 3 hours in the postanesthesia care unit before transfer to the transplant ward. Patients were transferred to the intensive care unit if an American Society of Anesthesiologists classification of 3 or greater was shown or if patients required prolonged invasive monitoring.

Statistical analyses
For a priori power analysis, G*Power software12 was used. On the basis of literature data,9 if DGF incidence was 30% and CIT was 20% greater in patients with DGF than in those without DGF, it was necessary to analyze a minimum sample of 108 patients to obtain a power of 0.90 with α = 0.05 and effect size of d = 0.66. The final sample number (n = 130) was chosen to compensate for any dropouts.

Data are expressed as mean and standard deviation or numbers. To highlight any differences between the 2 groups (patients with and without DGF), t tests were applied to continuous variables. Distribution of categorical variables in the 2 study groups was analyzed with chi-square or Fisher exact test, as appropriate.

Our study included 125 patients (see Table 1 for patient characteristics). Five patients were excluded due to incomplete medical records (n = 3) or because they did not met inclusion/exclusion criteria (n = 2). With regard to demographic parameters and those related to dialysis treatment in recipients at time of transplant, age was higher and dialysis time was longer in patients with DGF compared with patients without DGF. The prevalence of diabetes and hypertension was similar in the 2 groups (Table 1).

The prevalence of DGF was 30.4% (n = 38). No statistically significant differences were found between the 2 groups regarding preoperative hemoglobin values, transfusion needs, and colloid and inotropic infusions. However, patients with DGF were more frequently admitted to the intensive care unit than patients without DGF (P = .006) (Table 2). Cold ischemia time was significantly prolonged in patients who developed DGF (Table 2). Hospital stay duration was significantly longer in the DGF group, but no statistically significant differences were found in the prevalence of acute rejection between the 2 groups (Table 2).

The main result of our study showed that longer CIT, with a calculated cutoff of 9 hours and 12 minutes, was the only predicting factor for DGF occurrence in kidney transplant patients. An extended cutoff of 28 hours has also been found13; this difference versus our result could be attributed to the less total time elapsed between organ removal and grafting in our center. The prevalence of DGF in this study (30.4%) was similar to that already described in the literature.5,14

We also observed that DGF occurrence was associated with donor advanced age. In previous studies, some donor characteristics other than age, such as creatinine levels and hypertension, have been previously associated with DGF in kidney transplant recipients.4,8,15,16

In the present study, recipient-related factors asso-ciated with DGF included advanced age and longer pretransplant dialysis duration, whereas dialysis mo-dality was not relevant to DGF, as shown previously.16 This may be because, in our sample, most patients were on hemodialysis at the time of transplant.17

Regarding anesthesiologic care of recipients, the protocol used in our hospital is standardized, providing maintenance of euvolemia by infusion of crystalloids and, to a lesser extent, of albumin, according to the criterion stating that fluid man-agement under central venous pressure monitoring may reduce the onset of DGF.18 In this regard, no statistically significant differences were observed between patients with DGF and those without DGF with regard to albumin administration, dopamine use, and blood transfusion, as previously shown by Dawidson and associates.19 The only difference in anesthesiologic management between the 2 groups was the more frequent transfer to the postanesthesia care unit for patients with DGF.

In this study, DGF occurrence in kidney trans-plant recipients was associated with worse outcome, which was highlighted by prolonged hospitalization, higher serum creatinine values at discharge and at 3 months, and lower graft survival compared with patients in which organ function was rapidly achieved. At 1-year follow-up, patients who deve-loped DGF in the first week of transplant also showed lower graft survival than patients who had rapid recovery of organ function. A previous study demonstrated that DGF also influenced 5-year graft survival.20

Better management of modifiable risk factors in recipients, such as reducing wait time under dialysis treatment and CIT, may help to reduce the onset of DGF and the related health care costs.21

The main limitation of our study was its retro-spective design with possible bias due to the fact that our study sample may only partially represent the population of patients with and without DGF. To mitigate this aspect, we accurately selected a homo-geneous sample of patients in which patients with the same intraoperative care were followed. Moreover, history of hypovolemia and donor body mass index could not be evaluated due to insufficient data.

In conclusion, the only predicting factor of nega-tive outcome (presence of DGF) in this study was CIT, with a cutoff of 9 hours and 12 minutes. Occurrence of DGF in turn was associated with longer hospitalization and 1-year poor graft survival. To improve long-term survival after kidney trans-plant, efforts should be focused on limiting the CIT and associated injury.9,22

Future studies should evaluate the optimization of posttransplant renal function obtained by means of new technologies such as pulsatile perfusion. This graft maintenance technique could be crucial for minimization of ischemia-reperfusion injury.23,24 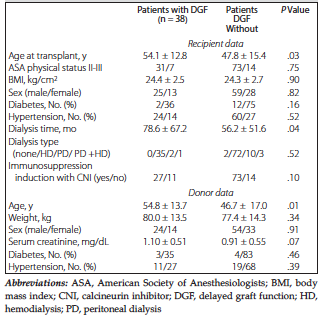 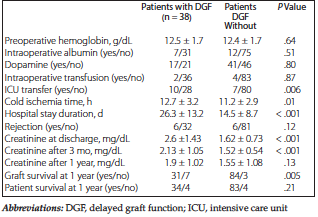 Table 2. Intraoperative Care and Outcomes in Patients With and Without Delayed Graft Function 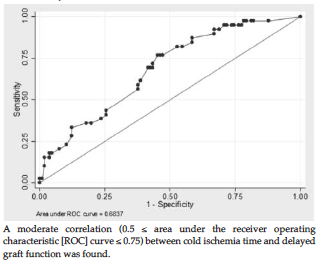