Heart-lung transplant (HLT) is an accepted treatment method for patients with end-stage cardiopulmonary diseases. The long-term survival rate after HLT has improved, but it is still far from satisfactory. Immune-mediated damage such as bronchiolitis obliterans syndrome, cardiac allograft vasculopathy (CAV), and malignancies are the leading causes of death in patients after HLT. Therefore, the fundamental solution for improving long-term survival is to induce immunotolerance to donor allograft.

The maintenance of immunotolerance encom­passes several mechanisms, in which regulatory T cells (Tregs) are well studied and the most attractive target. Regulatory T cells are the major regulators of the immune response; they maintain a state of self-tolerance free from autoimmune diseases and promote allograft survival. It has been shown that only CD4-positive (CD4+)CD25high T cells have immunosuppressive effects in in vitro experiments. The newly defined Tregs constitutively express high levels of CD25 and the transcription factor Foxp3, showing low or no expression of CD127 (CD4+CD25highFoxp3+CD127low/neg Tregs).

A patient who received the first HLT at our center in 2003 has survived more than 11 years. This patient has maintained normal life activities and cardiac function (New York Heart Association class I-II); this makes him the longest surviving HLT recipient in Asia. We report this case here in which we assessed the patient’s Treg levels to preliminarily evaluate his immunologic function status in relation to chronic allograft rejection.

A 20-year-old man who had been diagnosed with Eisenmenger syndrome, secondary to ventricular septal defect, presented to our clinic. His mean pulmonary artery pressure was 50 mm Hg, with a pulmonary arteriole resistance of 12 Wood units; therefore, no other therapeutic options were available, except HLT. In late 2003, the patient underwent HLT surgery. The donor was an 18-year-old traffic accident victim with the same blood type and similar body size. For the procedure, we adopted the classic “bicaval cannulation anastomosis” method. The patient’s condition was stable posto­peratively. His immuno­suppressive regimen has included tacrolimus (4 mg twice per day) and mycophenolate mofetil (500 mg twice per day) since 2007 and continued until now.

At his 11th anniversary after HLT, extensive examinations were carried out, including echocar-diography, pulmonary function tests, computed tomography (CT) of the lung, and CT coronary angio­graphy, to comprehensively evaluate the function of allografts and the degree of chronic allograft rejection. In addition, we analyzed the patient’s Treg levels to preliminarily assess the status of his immune function in relation to chronic allograft rejection.

Improved treatments for infections and rejection have increased survival markedly in HLT recipients. The Stanford Center1 reported 1-, 10-, and 15-year survival rates of 62.1%, 17.2%, and 13.8% in the early 1980s, which increased to 75%, 40%, and 30% in the 2000s. Although more HLT procedures are performed in Asia than in the United States, the survival rate is much lower.

Chronic heart allograft rejection can manifest as CAV. Fortunately, CT angiography and echocar-diography revealed no CAV in our patient. Chronic lung allograft rejection can manifest as bronchiolitis obliterans syndrome, which is characterized by ventilation function disturbance, with CT scans on expiration showing air trapping. Pulmonary function tests and lung CT demonstrated that the patient had advanced-stage bronchiolitis obliterans syndrome. Next, we assessed the status of his immune function in relation to the clinical data.

Tregs are crucial for maintaining immunologic self-tolerance and immune homeostasis. Animal research and clinical data have shown that Tregs contribute to inducing transplant tolerance and graft acceptance.2-4 Therefore, in this study, peripheral Treg levels were detected to indirectly assess whether Tregs were involved in the maintenance of tolerance. Interestingly, circulating Treg levels in our recipient were slightly lower than values obtained for healthy controls. These findings corroborate previous reports showing that Tregs are less abundant in heart, kidney, and liver transplant recipients compared with controls.4,5

One could speculate that Treg frequency increases due to recruitment and homing in the graft site to induce tolerance, causing a decrease in circulating Treg levels. However, this requires further studies assessing multiple HLT patients. Here, we revealed the preliminary status of his immune function, with further intensive immunology research underway in our laboratory.

In conclusion, this is the first study to detect Treg levels in an HLT patient. However, we assessed a single case and cannot generalize the findings. His long-term survival may be due to the immunosup­pression regimen, close follow-up, good compliance, strong survival desire, and/or a combination. Although his pulmonary function test results are not satisfactory, the patient does not have dyspnea and still works efficiently. 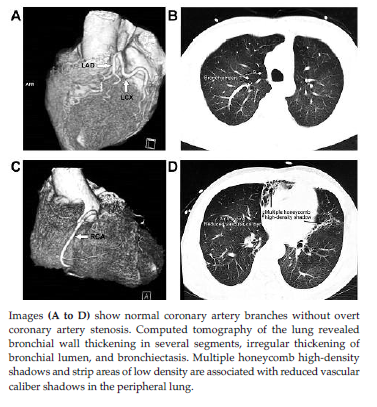 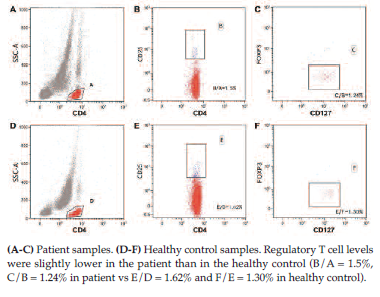