Primary nonfunction due to thrombosis after pancreas transplant is still the leading cause of nonimmunologic graft failure. Early identification of pancreatic graft arterial thrombus and prompt surgical intervention are effective for rescue of graft perfusion and its associated complications. Here, we report a case of successful surgical thrombectomy of the splenic artery, with particular emphasis on clinical presentation, diagnosis, and surgical technique.

The most common cause of nonimmunologic graft failure in pancreas transplant is thrombosis, which is primarily venous in nature. Primary nonfunction due to thrombosis has a reported incidence of 10% to 35%.1-4

The low-flow microvascular state, which charac­terizes the pancreas allograft, makes it vulnerable to vascular complications. Despite numerous risk factors associated with donor, recipient, and surgical techniques that predispose to thrombosis, its pathogenesis remains unclear.3,4

Here, we report a case of successful surgical thrombectomy of the splenic artery, with particular emphasis on clinical presentation, diagnosis, and surgical technique.

A 40-year-old white female patient with previous history of a failed simultaneous pancreas-kidney transplant due to pancreatic graft hemorrhage and pancreatectomy 3 years previously was admitted to undergo a pancreas after kidney transplant. The patient had been appropriately preassessed and deemed surgically fit to undergo the procedure through a midline laparotomy approach.

The organ was retrieved from a 30-year-old brain dead donor with a body mass index of 23 kg/m2; the donor had died from intracranial hemorrhage secondary to head trauma. The donor had had no other comorbidities or risk factors. The HLA mismatch was 1-1-0.

During bench work preparation of the pancreas, no signs of damage, edema, or significant steatosis were observed. Surgical implant was unremarkable, and good reperfusion was seen. The pancreas was placed intraperitoneally, using a Y graft (from the donor’s common, external, and internal iliac arteries), anastomosed during back table work to the splenic and the superior mesenteric arteries, which were anastomosed end to side to the recipient’s common iliac artery. The portal vein was anastomosed end to side to the common iliac vein (systemic venous drainage), and the exocrine drainage was enteric. The total cold ischemic time was reported as 11 hours. The organ showed good global perfusion on routine ultrasonography performed in the recovery room. The immunosuppressive protocol consisted of alem­tuzumab as induction, steroids (withdrawn on day 7), and mycophenolate mofetil and tacrolimus as maintenance therapy.

The patient showed good initial postoperative recovery with normal blood sugars, did not require insulin infusion, and showed falling serum amylase levels and inflammatory markers. There were no immediate complications, and intravenous heparin was started on day 1 at a rate of 100 U/h (adjusted according to the activated partial thromboplastin time levels). On day 6 posttransplant, the patient presented with acute hyperglycemia and rise in amylase levels, prompting urgent imaging.

A computed tomography angiogram showed reduced perfusion of the pancreatic graft secondary to splenic artery thrombosis, leading to immediate surgical intervention (Figure 1). On reexploration, a nonpulsatile splenic artery was visualized with mild ischemic lesions of the body and tail.

An arteriotomy was made at the level of the junction of the Y graft, exposing a soft thrombotic occlusion, extending down the splenic artery. A thrombectomy was then performed using a size 4 Fogarty catheter, thus evacuating the thrombus, and perfusion was reestablished after closure of the arteriotomy. Perfusion was confirmed using intraoperative Doppler ultrasonography, which showed good signals in all sections (Figure 2).

Heparin was recommenced, and the patient went on to make a full and uneventful recovery. She was discharged 7 days after the procedure, with good pancreatic function and glycemic control (Figure 3). The patient remains normoglycemic at 3-year follow-up.

Despite improved outcomes, the technical failure rate, mostly due to graft thrombosis, still remains a concern. The unique nature of the low blood flow to the pancreas compared with other organs enhances the risk of thrombosis of the graft.

A rise in blood glucose levels, closely monitored in the early postoperative period, when the risk of thrombosis is highest, is suggestive of pancreas graft thrombosis and is a key indication for further investigations. However, this is not pathognomonic since it lacks in specificity, with both arterial and venous thrombosis being documented in the context of euglycemia.5,8

Confirming the diagnosis using imaging of the Y-graft, portal vein, and pancreas parenchyma is useful. Ultrasonography and computed tomography imaging tend to be the most commonly used modalities due to their ease of use, accessibility, and accuracy. Radionucleotide imaging and magnetic resonance imaging may also be diagnostic but are less commonly available, particularly overnight and during the weekend.10-12

Graft salvage in the setting of vascular thrombosis is time dependent, with total venous or arterial occlusion more likely to result in graft loss compared with partial occlusion.13,14 Surgical thrombectomy, percutaneous thrombectomy, fibrinolysis, and antico­agulation have all been documented as possible methods to treat thrombosis, with choice being dependent on site, the extent of thrombosis, operator experience, and availability of interventional radiologists.13

Pancreatic graft thrombosis is a serious but treatable complication. Prophylactic steps to minimize risks through appropriate patient and organ selection are expected, as is the appropriate use of antico­agulation. However, this must be combined with early identi­fication and intervention to allow opportunities to successfully salvage grafts. Timely surgical throm­bectomy in cases of arterial thrombosis, as we have described here, is a very effective and reliable treatment to rescue the graft perfusion and its associated complications. 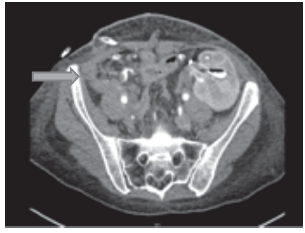 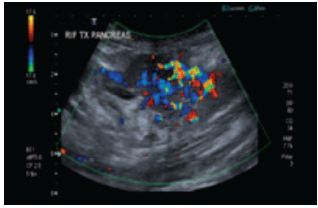