Donor scarcity is a primary problem in the develop­ment of a transplant program. The imbalance between an extremely increasing demand and the number of organs in the supply has led to an extended criteria donor approach. The successful use of donors with infectious diseases and septic shock has been reported. However, organs from deceased donors with traumatic abdominal injury and open abdomen are usually discarded due to risks of severe infections. Thus far, only 1 such case, in which a liver graft from an open abdomen was used successfully, has been reported. Herein, we report of a case of liver transplant using a traumatized liver allograft procured from a deceased donor with an open abdomen. The donor was a 16-year-old patient who had blunt abdominal trauma and severe head injury from a car accident, resulting in emergency laparotomy with suturing of the lacerated wound at the liver and abdominal packing. The donor was subsequently pronounced brain dead, and the family consented to organ donation. A multiorgan procurement was performed, and the liver was transplanted to 52-year-old patient who had multiple hepatocellular carcinomas. The postoperative course was without any infection or rejection. In conclusion, the use of donor livers with preexisting trauma in open abdomen settings can be used as alternative to expand the organ donor pool.

The current insufficiency of organ donation is still a primary obstacle in the development of an organ transplant program, especially in Asian countries. The extended criteria donor approach is one solution to decrease the gap between organ demand and supply. Steatosis liver, prolonged ischemia time, elderly donors, or donors with a history of cardiac arrest are considered as extended criteria or marginal liver graft donations.1-3 Organs from donors with an active infection can also be used if proper antibiotics have been administered.4 The careful selection of an appropriate recipient for marginal graft is also needed to deter the possibility of inferior graft function. However, the use of organs from donors with obvious traumatic abdominal organ injury is not universally accepted.

There have been several reports about successful use of traumatized liver graft,5-10 but few reports have documented the use of donations from an open abdomen setting,11,12 where infection is a concern due to the hostile environment, and only one such report documented a good outcome. The open abdomen is one of the damage control techniques performed in life-threatening situations, in which abdominal closure is delayed until hypothermia, metabolic acidosis, and coagulopathy are corrected and hemodynamics are stable. The risk of colonization or infection, which may transmit via transplant, is a concern, and making conclusions regarding whether these types of organs should be discarded is difficult. Herein, we report a successful case involving liver transplant using a traumatized liver allograft procured from a deceased donor with an open abdomen.

Donor
The donor was a 16-year-old male patient who had blunt abdominal trauma and severe head injury from a car accident, which caused cardiac arrest at the emergency department. The patient regained systemic circulation after cardiopulmonary resuscitation was performed for 2 cycles. At the hospital, damage control laparotomy was performed first, along with suturing of the lacerated wound at liver and abdominal packing. An open abdomen with temporary abdominal closure by a towel-based negative pressure wound system (Figure 1) was performed followed by aggressive resuscitation to correct hypovolemia, metabolic acidosis, and coagulopathy in the intensive care unit. Broad spectrum antibiotics were started as usual for blunt abdominal trauma cases (ceftriaxone and met­ronidazole). The patient’s abdomen was reexplored 4 hours later due to ongoing bleeding, which was ended with abdominal packing and temporary abdominal closure again. The donor subsequently was declared brain dead 1 day later, and his family consented to organ donation. The donor’s mean arterial blood pressure was maintained with high doses of norepinephrine. His liver function test before procurement time showed albumin at 2.8 g/dL, aspartate aminotransferase level of 313 U/L, alanine aminotransferase level of 215 U/L, total bilirubin of 0.84 mg/dL, and direct bilirubin of 0.36 mg/dL. The donor did not have fever, leukocytosis, or any sign of active infection.

A multiorgan procurement was performed on day 2 of his admission. There were no signs of obvious intra-abdominal infection in the operative field. Six pieces of packing laparotomy pad were carefully removed, and peritoneal fluid was sent for microbial culture analysis. Five liters of histidine-tryptophan-ketoglutarate solution were perfused through a 22F aortic cannula as preservation fluid. The liver and both kidney were subsequently procured from the donor. There was a 10-cm nonactive bleeding lacerated wound at segment 8 of the liver that had been previously sutured with multiple stitches of chromic catgut number 0 and reinforced with polytetrafluoroethylene pledgets (Figure 2). We used a standard back-table procedure for liver retrieval. Liver biopsy revealed no steatosis.

Recipient
The liver was transplanted to an ABO blood group-compatible, 52-year-old male patient who had multiple hepatocellular carcinomas along with chronic hepatitis B infection. He underwent transarterial chemoembolization 2 times previously for bridging therapy before transplant. Ampicillin- sulbactam was used as preoperative antibiotic before the incision was made. Standard orthotropic liver transplant was performed with bicaval anastomosis technique. Immuno­induction was started with methyl­prednisolone. Cold ischemic time was 5 hours and 27 minutes, and warm ischemic time was 1 hour and 14 minutes. Three units of packed red blood cells were transfused during the surgical procedure. Piperacillin- tazobactam, fluconazole, ganciclovir, and co-trimo­xazole were administered postoperatively as empirical antibiotics per standard protocol. Immunosuppressive therapy was maintained by tacrolimus, mycophenolic acid, and prednisolone. Multiple doses of hepatitis B immunoglobulin and entecavir were provided to prevent recurrence of hepatitis B infection.

The postoperative course proceeded well without any infection. All surgical drains were removed within 5 days after the surgical procedure. The recipient developed rising levels of transaminase enzyme at day 14 after transplant, which was investigated by computed tomography angiogram. The angiogram showed normal vascular anastomosis and the lacerated wound of the liver graft. The recipient was discharged on day 21 after transplant with normal liver function. He recovered well and showed no signs of recurrent disease 1 year after transplant.

Damage control surgery is a mainstay strategy in hemodynamic unstable patients to aid in regaining stability. Currently, most trauma surgeons prefer to use the open abdomen technique rather than the standard fascial closure to shorten the operative time and to avoid abdominal compartment syndrome. Infectious complications are a primary concern due to peritoneal contamination, especially in the intestinal fistula and abscesses, which have been observed in 2% to 28% of temporary abdominal closures13 but less observed after open abdomen periods of less than 72 hours.14 There are only a few case reports of abdominal organ donation in the open abdomen setting, specifically when the organ is traumatized. Some traumatized livers such as those having trauma to the hilar structure or hepatic vein should not be transplanted due to risk of hemorrhage and hypoperfusion, which could lead to primary nonfunction if accompanied by prolonged ischemic time and preservation injury. However, livers with low-grade parenchymal injury may be considered as graft candidates.5-10

The first successful use of a liver from an open abdomen was reported by Grezzana and associates.12 The donor was pronounced brain dead 6 days after laparotomy. The liver had superficial lacerations, which had no record about need for suture. The peritoneal fluid from the donor was positive for gram-negative rods, and piperacillin-tazobactam was administered to the recipient until posttransplant day 7. The recipient was discharged on day 25 after transplant with no infectious or surgical comp­lications. In another report from Watkins and associates,11 the peritoneal fluid culture was positive for multidrug-resistant Pseudomonas aeruginosa, which had been transmitted to all recipients (heart, liver, and 2 kidneys). The liver recipient had sepsis after transplant and died on day 38 after transplant; however, the cause of death was unrelated to multidrug resistance. This study raised concerns regarding safety with open abdomen donors.

In our case report, the donor was a young man who had received 2 surgical procedures within 48 hours and had liver injury of grade 3 per the American Association for the Surgery of Trauma.15 We proceeded with liver retrieval with caution and with foresight regarding transplant. Bleeding from the parenchymal injury was not observed during reperfusion time, and the liver had good function. There were no infectious complications during the postoperative period. Therefore, we suggest that an open abdomen donor is acceptable with caution. Prolonged packing time and bacteremia, especially multidrug-resistant organisms, could be factors to reject the donation. Traumatized liver could also be used safely if injury is not severe. Operative details from trauma surgeons are essential for decision making.

Donor livers with preexisting trauma in an open abdomen setting, especially those of less than 72 hours, can be used with caution as an alternative choice to expand the organ donor pool. 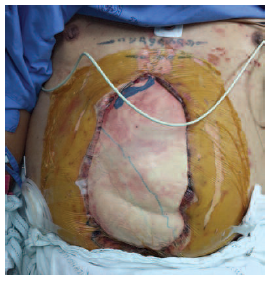 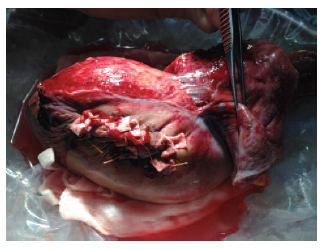