Posttransplant lymphoproliferative disease represents a heterogeneous group of diseases characterized by uncontrolled proliferation of lymphocytes, favored by immunosuppression. Several risk factors for its development have been described, with Epstein-Barr virus infection being a main cause of early-onset forms and chronic antigen stimulation of donors and/or accumulated immunosuppression as key factors of later forms of lymphocyte transformation. The present clinical case presents a patient diagnosed with post-transplant lymphoproliferative disease 3 years after renal transplant who had a potentially lethal complication related to conversion to inhibitors of mammalian target of rapamycin. Because clinical studies that establish the most suitable treatment are lacking, it is recommended to identify the strategy, defining possible risks versus benefits of conversion to inhibitors of mammalian target of rapamycin in cases of posttransplant lympho-proliferative disease, and to maintain a high level of surveillance in case of possible secondary effects that can be verified after their introduction.

Posttransplant lymphoproliferative disease (PTLD) represents a heterogeneous group of diseases characterized by uncontrolled proliferation of lymphocytes, favored by immunosuppression.1-16 Several risk factors for its development have been described, with infection by Epstein-Barr virus being a main cause of early-onset forms and chronic antigen stimulation of donors and/or accumulated immunosuppression as factors of later forms of lymphocyte transformation.2

In the literature as a first-line treatment after PTLD diagnosis, in addition to specific treatments (chemoradiation, radiotherapy, and/or immuno-therapy), it is recommended that either doses of calcineurin inhibitors be decreased or agent converted to inhibitors of mammalian target of rapamycin (imTOR),10 since, with either, the reduction of immunosuppression would restore the ability of the receptor’s immune system to control the uncontrolled proliferation of lymphomatous cells.3 However, the reduction of immunosuppression is followed by complete remission only in localized and histologically less aggressive forms, with most cases requiring addition of a chemotherapy regimen (rituximab and/or cyclophosphamide, doxorubicin, vincristine, prednisone + rituximab).4 On the other hand, although an imTOR has an antiproliferative effect,5 its use is not free from possible secondary effects.

Here, we present a patient diagnosed with PTLD 3 years after renal transplant who developed a potentially lethal complication related to conversion to imTOR. Because clinical studies that have established the most suitable treatment are lacking, it is recommended to identify a strategy, defining possible risks versus benefits of the conversion to imTOR in cases of PTLD, and to maintain a high level of surveillance in case of possible secondary effects, which can be verified after their introduction.

We present the case of a 63-year-old anephric male patient who was receiving substitute renal treatment with hemodialysis. In 2011, he received a kidney from a deceased donor, with the transplant being of low immunologic risk. Cytomegalovirus and Epstein-Barr virus serostatuses for donor and receptor were both positive. As induction, he received basiliximab and maintenance therapy with tacrolimus, myco-phenolate mofetil, and prednisone. Three years after the renal transplant, the patient presented with nonpainful lymphadenopathy in the lateral cervical region. A positron emission tomography/computed tomography scan was performed, which showed multiple hypermetabolic territories of ganglia in the submandibular and cervical regions and thoracic infiltration with involvement of bilateral axillary regions, with lymphadenopathy present in the mediastinum and in the supra- and infradia-phragmatic.

With these findings, a cervical lymph node dissection surgery was performed. Histologic study showed a high-grade non-Hodgkin B-cell lymphoma (stage IIIA). The patient was started on a treatment regimen based on cyclophosphamide, doxorubicin, vincristine, and prednisone + rituximab (4 cycles) and a reduction of immunosuppression consisting of conversion to imTOR (everolimus).

Four months after conversion to everolimus, the patient presented with respiratory symptoms (dyspnea and cough), which were treated with inhaled bronchodilators. Six months after PTLD diagnosis and once the treatment with chemotherapy was ended, a control positron emission tomography/-computed tomography scan was performed, which showed disappearance of cervical lymphadenopathy but persistence of some mediastinal spread of nonsignificant size. In addition, the scan showed appearance of ground glass opacity in isolated areas of the lung parenchyma (Figure 1).

Ten days later, the patient was hospitalized with symptoms of continuous fever, cough with whitish sputum, and severe dyspnea that did not respond to the bronchodilator treatment and broad-spectrum antibiotics. The patient’s condition was complicated by respiratory failure, which required respiratory support with tracheal intubation. A complete microbiologic study was conducted with all results being negative.

A thorax computed tomographic scan showed the aforementioned areas on the patchy ground glass and bilateral and diffuse distribution associated with interlobular septal thickening compatible with cobblestone pattern. Furthermore, a reappearance of the paratracheal adenopathy was observed, as well as an increase in the size of the mediastinal lesion compared with the previous control scan (Figure 2).

To perform differential diagnosis examinations, fiber bronchoscopy and bronchoalveolar lavage were performed, which showed positivity to polymerase chain reaction for the respiratory syncytial virus. For this, the patient was treated with ribavirin; the remaining analyses and cultures were negative. The bronchoalveolar lavage immunophenotypic analysis showed a normal lymphocyte population.

It was eventually decided to perform a lung biopsy by thoracotomy. The biopsy showed abnormalities compatible with diffuse interstitial pneumonitis of unsure origin (Figure 3). No neoplastic proliferation or tuberculosis was found, showing no PTLD relapse.

Because there was suspicion of possible lung toxicity due to imTOR (everolimus), the immuno-suppressive treatment was changed, reintroducing a calcineurin inhibitor (tacrolimus) at a reduced dose and increasing the dose of corticoids. After 2 weeks of treatment, the patient showed a notable improvement of the respiratory symptoms. Three weeks later, a control thorax computed tomography scan showed complete resolution of the bilateral lung parenchymal disease. Four months after the patient had resumed calcineurin inhibitor treatment, the patient has remained in complete remission of PTLD and showed excellent function of the renal graft.

It has been described that imTOR agents used in immunosuppressive treatment after renal transplant could cause adverse effects such as interstitial pneumonitis.6-9,11 The physiopathology is not clearly known, but it has been demonstrated that imTORs stimulate production of inflammatory cytokines and memory T cells, thus promoting proinflammatory effects in lung tissue.8,9 No direct association has been demonstrated between imTOR levels and the development of pneumonitis.9 The recommended first line of treatment consists of reducing or discontinuing the dose of the drug, as this measure may allow complete resolution of the clinical picture.6,8,9,12

The diagnosis of interstitial pneumonitis associated with imTOR in transplant patients should be considered after all possible infectious causes are excluded. In the clinical case presented here, micro-biologic studies were negative, except for the presence of respiratory syncytial virus. This may have been simply an epiphenomenon related to the state of extreme immunosuppression induced by both the immunosuppressant and the patient’s critical condition. The suspicion of a possible PTLD relapse or tuberculosis infection led us to perform a lung biopsy, which excluded both possibilities. It is important to note that, although interstitial pneumonitis is a well-documented complication and it was an exclusion diagnosis, in rare cases a lung biopsy is performed to confirm the diagnosis.12-14 In our patient, clinical and radiologic improvements were observed after withdrawal of imTOR.

Our case suggests that reduction of immunosup-pression based on conversion to imTOR when treating PTLD is not always the best strategy, as there is risk of postconversion rejection together with secondary effects of this class of drugs. These secondary effects include venous thrombosis15 and interstitial pneumonitis,6-9 which would compromise results obtained with the simple reduction of a calcineurin inhibitor and the specific PTLD treatment (chemotherapy). Up to now, no trial has evaluated the conversion to imTOR versus the sole reduction of calcineurin inhibitor dose. Available data remain conflicting, are not conclusive, and have not evaluated an imTOR discontinuing rate after conversion for PTLD.17,18

Despite the objective data that justify the conversion to imTOR after diagnosis of PLTD, we believe that the suitability of this strategy should be evaluated in an individualized manner, paying attention to each particular case. A constant high level of attention is needed to detect early possible complications related to the use of imTOR, which sometimes may be a diagnostic challenge. 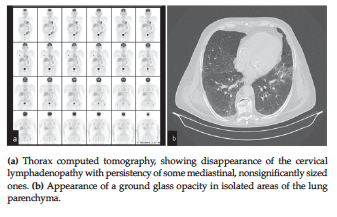 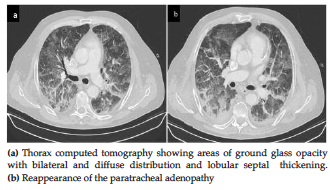