Objectives: Our objective was to assess the awareness of eye donation in an urban slum population and willingness to donate eyes after death.

Materials and Methods: A cross-sectional, population-based study was undertaken in 20 urban slum clusters of the Indian capital, New Delhi. A total of 2004 individuals aged 18 years and older were recruited. After written, informed consent was obtained, knowledge regarding eye donation was assessed through a predesigned close-ended questionnaire. The questionnaire was framed so as to understand the sociodemographic factors influencing the willingness to donate and the awareness of eye donation in this distinct population.

Results: The mean age of the recruited individuals was 36.53 ± 13.68 years. Age did not have any significant effect on awareness regarding eye donation. We observed that 34.3% of the study population had no knowledge of eye donation and that 7.78% of the study population had excellent knowledge. Education seemed to be an important determining factor regarding knowledge of eye donation. Multivariable logistic regression demonstrated better awareness among the Hindu population (81.1%) and those belonging to a higher caste (P < .05). The younger age group (those 18-30 years old) showed significant willingness to donate their eyes versus older age groups (P < .001). In our study population, male participants (P = .006), those classified as literate (P < .001), and those classified as Hindu (P < .001) were more willing to pledge their eyes for donation.

Corneal diseases are a major cause of visual impairment and blindness in the developing world.1 Corneal transplant is the only effective mode of therapy for visual rehabilitation of people who become blind because of corneal diseases. Success depends on the availability of high-quality donor eyes for corneal transplant. Currently, there is a gap between demand and supply of donor corneal tissues in the developing world, where the need is highest due to greater prevalence of corneal diseases in these regions.2 The lack of a donor cornea pool in developing countries has been directly related to the lack of awareness and willingness to donate among the general population.3

Various studies have evaluated the awareness among different groups of populations, including medical students, nursing staff, rural populations, and others.3-6 Although these studies have suggested many opinions and factors that tend to influence decision-making regarding the subject of “eye donation,” no studies have been conducted in populations residing in urban slums, an important segment of the underserved population in India.

“Urban slums” are unique in their constitution and usually refer to settlements or regions in the cities that are heavily populated with people who have migrated from the rural villages for better job opportunities but do not have access to one of the basic living means as described by the United Nations Human Settlement Program. More than one-half of the residents in Delhi live in slums. This is a distinct population characterized by squalor, urbanization, economic instability, unemployment, and social conflicts. This population may serve as a close link to the rural population, which remains difficult to access due to social barriers. Here, we conducted a population-based study in which we assessed various factors that may alter and affect awareness and willingness to donate eyes.

A descriptive cross-sectional study was conducted in 20 urban slums of New Delhi. After ethical clearance was obtained from the Institutional Ethical Com-mittee, our study was commenced in accordance with the Declaration of Helsinki. We randomly recruited 2004 participants aged 18 years and older after they provided written informed consent. The study design and the aim of the study were explained to all participants. The participants were then interviewed using a set of predesigned questions that had been validated. The questionnaire could not be self-administered in this population as a large proportion of the participants were illiterate. Pretesting of the study questionnaires was done in the hospital, in community primary eye care clinics, and in the general population. Piloting of all study-related procedures was done in an urban slum cluster that was not part of the study.

In the questionnaire, responses were noted verbatim as given by the respondent in the local Hindi language. The study questionnaire was designed to gather basic information on the knowledge and awareness of an individual regarding eye donation and to understand the modifiable factors that tend to influence attitudes toward eye donation in these populations. Various sociodemographic parameters, including age, sex, religion, level of literacy, marital status, caste, and type of family, were recorded. The caste system in India is divided into general and nongeneral. The general group broadly includes Brahmin, Kshatriya, and Vaishnava. The nongeneral groups include the scheduled castes, scheduled tribes, and other backward classes. The scheduled castes and tribes are 2 groups of historically disadvantaged people recognized in the Constitution of India. This division is based on their social condition and other educational and economic factors.

When we questioned participants about willingness to donate, only 28% answered in the affirmative. Those in the younger age group (18-30 years) showed significant willingness to pledge their eyes versus the older age groups (P < .001). In addition, male participants (P = .006), those who were literate (P < .001), and those who were Hindu (P < .001) were more willing to pledge their eyes for donation (Table 3).

Limited knowledge and limited awareness of eye donation are major contributing factors for the low pool of donor corneas in the developing world. Various causes could contribute to this pattern in these communities. Here, in this community-based study, we aimed to uncover some important sociodemographic factors that may affect knowledge of eye donation in a unique subset of the Indian population (those who live in urban slums). It is important to recognize these factors and develop targeted strategies so that we can find ways to change attitudes and behavior in this population and increase the willingness for eye donation.

In this survey, we found that 34.28% participants had absolutely no knowledge about eye donation. However, 65.72% had either some or complete knowledge about donation of eyes after death. Our results appear to be statistically different from studies conducted in southern India.2,5 However, these differences in knowledge are not as great when compared with other parts of India, such as rural Pondicherry, which was reported to be as high as 80.6% in one study.3 It is not merely knowledge of eye donation that is important; it is also being knowledgeable about the timing to donate eyes after death. This latter knowledge was lacking in our study population, in which only 7.78% seemed to have complete knowledge regarding eye donation. This is important as retrieval time after death significantly affects the utilization and outcomes of corneal transplant in terms of both anatomic and functional success.

Similar studies on awareness of eye donation have been conducted in other regions of the world. A recent cross-sectional study conducted in 500 Singaporean students demonstrated an awareness of 73.2%. The study also reported that only 31% of these students expressed willingness to donate their eyes after death.7 In another study conducted in Osaka, Japan, 25% of participants from the general public had awareness of tissue transplant.8 In Nigeria, eye donation awareness among medical and nonmedical students was 47.7% and 33.3%, respectively. Likewise, willingness to donate eyes was only 13% and 16% in these respective groups.9

In our study, we found no statistically significant effect of age on awareness of eye donation. This can be attributed to better communication and interaction between the different generations with time and changing outlooks. Female participants appeared to be better aware of eye donation than male parti-cipants. This may be due to more social participation and more exposure to methods of mass media communication such as radios and television sets. The benefits of mass media have been previously highlighted in various studies.2,6,10 These com-munication types serve as important methods of mass information for both literate and illiterate individuals.

It was found that those who were Hindu had better knowledge about corneal donation than other religious communities; those belonging to the higher caste also had better knowledge. In a secular country such as India, it is important to take into consideration the division and segregation of the society based on religion and caste. These factors tend to have an important bearing on sensitive matters such as eye donation. The social system, customs, religious preaching, and personal values affect the acceptance of eye donation in communities and are difficult to modify. Gogate and associates reported better influence from religious and community leaders in terms of motivating people for eye donation and increasing their knowledge.11 These leaders may help form an important link to connect to the more socially disadvantaged and those who belong to strict religious groups with acceptance of eye donation.11

Willingness to pledge eyes for donation, passing this information to the next of kin, and acceptance and willingness from family members to donate eyes of family members after death are of utmost importance. It is the next of kin or a family member who makes the first call regarding donation after death. Their consent is the most important factor both legally and ethically. In our study, only 28% of participants were willing to donate. Of those who were not willing, most stated that they had no time, whereas others were hesitant because of either associated myths that it disturbs the normal appearance of the body or because of religious beliefs.

In summary, our study demonstrates the need to improve awareness of eye donation in the study population. On the basis of the results of our present study, we recommend that dedicated health awareness programs led by ophthalmologists, health care workers, general community and religious leaders, nonprofit nongovernmental organization, and teachers be developed and instituted at the local community level. The programs should not only be made based on national requirements but must be tailored depending on the local community so that diversities in thoughts and opinions of the target population are considered before the programs are implemented. These programs should also include the general population, such as family members of patients with corneal blindness or those who have received a transplant themselves. Beneficiaries and related success stories can positively promote changes in the process of eye donation. These programs should not only educate the adults and the older population but create awareness among the younger generation, including those at the school level, to ensure a better tomorrow. Grass roots-level work is important to remove the various myths related to eye donation and to sensitize the community toward corneal blindness and its associated spectra of morbidity. Our objective here is to highlight the various parameters (social, religious, and demographic) that can be modified to help change perspectives in general populations. These efforts will go a long way in achieving the target of eliminating avoidable corneal blindness globally. 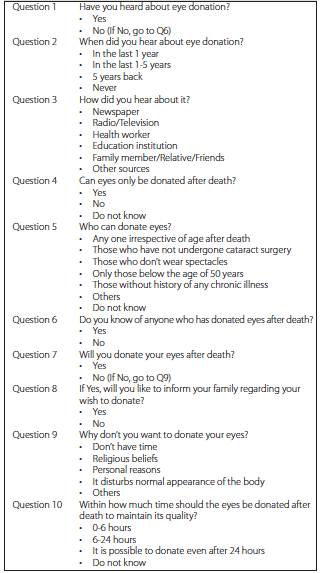 Table 1. Questionnaire Used for the Survey 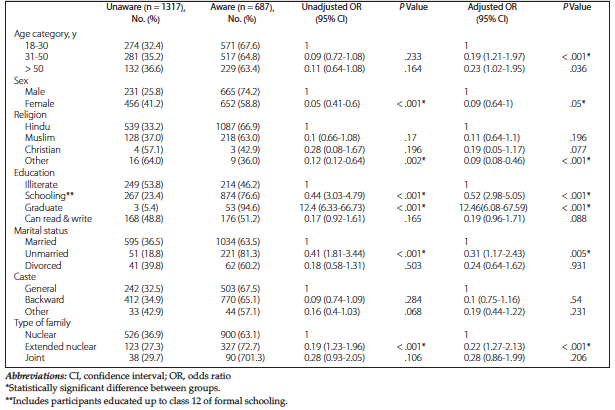 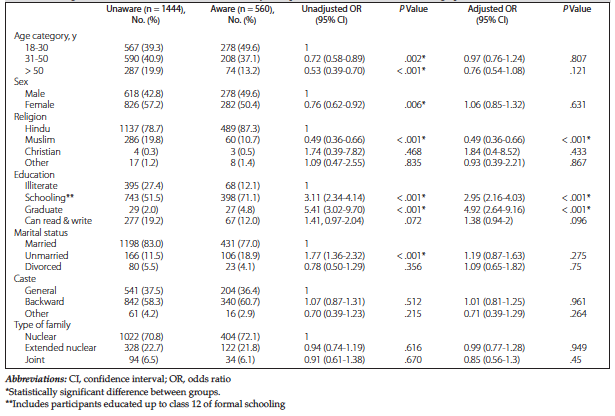 Table 3. Willingness to Donate in the Urban Slum Community: Comparison Based on Various Sociodemographic Factors

Figure 1. Assessment of Level of Knowledge Regarding Eye Donation in the Study Population