Objectives: Our aim was to investigate the effects of the Share 35 policy on outcomes in ethnic minorities and recipients who experienced early graft failure.

Materials and Methods: We analyzed donor and recipient data from the United Network for Organ Sharing database before (June 6, 2011 to June 18, 2013) and after (June 18, 2013 to June 30, 2015) implementation of Share 35. Graft and patient survival outcomes were compared.

Share 35 was initiated by the United Network for Organ Sharing (UNOS) on June 18, 2013, due to pressure to reduce wait list mortality and geographic disparities. Under Share 35, deceased donor livers are shared regionally with candidates who have a Model for End-stage Liver Disease (MELD) score of > 35 before they are offered to local candidates with MELD scores of < 35.1

The effects of this policy on wait list mortality have been well-studied.1-3 Rates have decreased across all MELD scores by 8% and by 30% in candidates with MELD scores of > 30.1 Furthermore, most reprioritized candidates (those with MELD < 35) were not disadvantaged.4 Despite these positive outcomes, certain types of recipients have been understudied in the Share 35 era. There are no reports regarding how Share 35 affects outcomes in ethnic minorities and recipients with early graft failure (EGF).

The rate of EGF due to any cause was measured at 7, 30, and 90 days posttransplant. Causes of EGF were further analyzed and classified into primary graft dysfunction/nonfunction, vascular thrombosis (hepatic artery, portal vein), acute and chronic rejection, viral hepatitis infection, biliary complications, patient death, or others. For the ethnicity analyses, patient death and graft failure were measured at 3 months, 1 year, and 2 years posttransplant.

In the survival analysis, patient death and graft failure during the respective outcome assessment period were the primary endpoints. Patients who did not experience any of the endpoints were censored on June 18, 2011 for the pre-Share 35 cohort and on June 30, 2015 for the post-Share 35 cohort.

Early graft failure rates pre- and post-Share 35 were compared separately in the low MELD (< 35) and the high MELD (≥ 35) cohorts (Table 7). Before the Share 35 policy, 6.1% of the low MELD group experienced EGF at 90 days after liver transplant compared with 5.3% after implementation of Share 35 (P = .02). Similarly, the EGF rate was also decreased when we compared the high MELD recipients at pre- versus post-Share 35 (10.8% vs 7.8%; P = .003). Figures 1A and 1B show the Kaplan-Meier analyses of graft survival before and after implementation of Share 35 in the low and high MELD recipients.

When the analysis was separated based on recipient MELD scores, we found that mortality 90 days after liver transplant was decreased for patients with MELD ≥ 35 from 8.12% in the pre-Share 35 era to 6.34% in the post-Share 35 era (P = .045, Table 7), although the cumulative survival rates were found to be no different between the 2 periods using Kaplan-Meier analysis (Figure 1, C and D).

Ethnic disparities have plagued liver transplantation along with other types of solid-organ transplantation for many years.5-9,10 Historically, African American (AA) recipients have shown inferior graft and patient survival rates compared with White, Hispanic, Asian, and other recipients both before and during the MELD era.5-7,11 Many have tried to elucidate reasons why AA patients typically experience inferior graft and patient outcomes after liver transplant. It has been propounded that AA patients are more likely to be more seriously ill at the time of liver transplant, are more likely to experience rejection and infection, and are more likely to have public insurance.5,6,8,12 Reports vary regarding outcomes in White and Hispanic recipients. Some have demonstrated that White recipients experience survival advantages over Hispanic recipients,5,9 whereas others have reported that Hispanic recipients experience superior outcomes compared with White recipients.6,10 Data are scarce regarding biologic, disease-related, and socioeconomic factors that are associated with survival rates in Hispanic patients after liver transplant. However, analyses from Hispanic recipients of kidney transplants have suggested that, despite higher rates of diabetes, lower average incomes and lower average levels of education, Hispanic patients tend to experience superior outcomes versus White patients.13 This so-called “Hispanic paradox” has been attributed to possible genetic advantages, better social support, or the “salmon bias theory,” which suggests that older Hispanic recipients return to their birthplace at the end of life and are therefore not counted in studies of mortality.13 Finally, Asian recipients typically experience the best outcomes after liver transplant, displaying superior graft and patient survival rates compared with White, Hispanic, AA, and other ethnic groups.7,10 It has been proposed that lower average body mass index and levels of access to liver transplant that are above their proportional representation on wait lists are among the reasons for improved outcomes in Asian populations.10

Our results for 1-year and 2-year graft and patient survival rates before the implementation of Share 35 correlate with the above-mentioned findings. Our data showed significant differences in graft and patient survival rates between ethnicities, with Asian patients generally experiencing the best outcomes followed by Whites and Hispanics, with AA patients having the worst outcomes. However, after the implementation of Share 35, the expected ethnic disparities in liver transplant outcomes were reduced. There were no significant differences in either 1- or 2-year graft and in patient survival rates between ethnicities. Overall, our analysis demonstrated that, after the implementation of Share 35, previously observed ethnic disparities were eliminated, suggesting that, at least in the short-term, the policy has unintentionally but successfully helped equalize outcomes between ethnicities.

One possible explanation for these results is that recipients who were historically sicker at the time of liver transplant are now able to receive organs earlier since they have priority over local candidates with better MELD scores. It is possible that Share 35 has led to improved outcomes in AA recipients since it has been demonstrated that AA patients tend to be more seriously ill at the time of liver transplant. Additionally, it is possible that the transplant community in the Share 35 era is better equipped to handle the care of ethnic minorities.

This analysis led us to closely examine EGF, which is an infrequent but potentially devastating outcome after liver transplant as it can result in a prolonged intensive care unit course or hospital stay, the need for retransplant, and increased post-transplant mortality. Although there is no consensus on the definition of EGF, it is most commonly described as the loss of allograft function (synthetic and metabolic) within 90 days of transplant from any cause, including primary graft dysfunction/nonfunction, vascular thrombosis (portal vein, hepatic artery), acute and chronic rejection, biliary complications, or viral hepatitis. Because of previous suggestions that Share 35 led to an unintended decrease in organ discard rate, we questioned whether this may imply an increased use of suboptimal donor organs for transplant procedures that in turn cause an increase in EGF. In addition, we wanted to assess whether the allocation of “better” organs to ethnic minorities (who tend to be more ill at time of transplant) could explain the improvements in ethnic disparities. We specifically wanted to determine whether EGF rates would increase in the low MELD (< 35) cohort and decrease in the high MELD (> 35) cohort after Share 35.

Our analysis revealed that the average DRI was increased from 1.76 to 1.78 after implementation of Share 35 (P < .001); however, due to the large sample size, this difference may not be clinically significant. Despite this increase in DRI, and in accordance with other reports showing overall unchanged outcomes after liver transplant in the Share 35 era,1,14 the results of our study indicated that the prevalence of EGF was largely unaffected or slightly improved by the Share 35 allocation policy. The decrease in EGF was seen in both low and high MELD groups in the Share 35 era. Thus, our data do not suggest that superior donor organs are being preferentially offered to recipients with high MELD scores (> 35). Furthermore, the improvements in ethnic disparities were not related to a decrease in EGF in ethnic minorities. Taken together, our findings suggested that perhaps before implementation of Share 35 many usable donor organs were unnecessarily discarded.

Analysis of causes of EGF revealed a significant increase in those due to secondary to primary nonfunction. Risk factors for primary nonfunction include donor age, steatosis, and warm and cold ischemic time.15 However, we found these factors not to be significantly different in our study cohorts pre- and post-Share 35 to explain the increased rates of primary nonfunction. In fact, we are wary that our analysis may be flawed by reporting bias inherent to the nature of this type of study. We also note that the rates of vascular thrombosis, biliary complication, viral hepatitis, and recurrent disease were signi-ficantly decreased after implementation of Share 35, thus together contributing to the decreased overall EGF rate after the policy change.

The main strengths of our analysis included the relatively large sample size from the nationwide UNOS database, which effectively captures outcomes from pre- and post-Share 35. At the same time, our study period was not so long such that surgical techniques and principles of perioperative manage-ment had changed drastically to bias the results. To our knowledge, this is the first analysis to investigate outcomes in understudied groups in the pre-Share 35 era. One limitation of the study is its retrospective nature.

The overall goal of the Share 35 allocation policy was to improve allocation of deceased donor allografts and reduce wait list mortality.1 Our analysis suggests that Share 35 could have unintentionally, yet effectively, reduced short-term ethnic disparities in liver transplant outcomes. Simultaneously, there was a slight decrease in the prevalence of EGF after 90 days, suggesting that Share 35 has not resulted in an increased use of suboptimal allografts. These results seem to confirm an equalization of outcomes among ethnicities not caused by worse outcomes in another group or by a higher rate of EGF in another group. Although these results are promising, future studies will be required to determine whether these trends continue at 5 and 10 years after liver transplant. 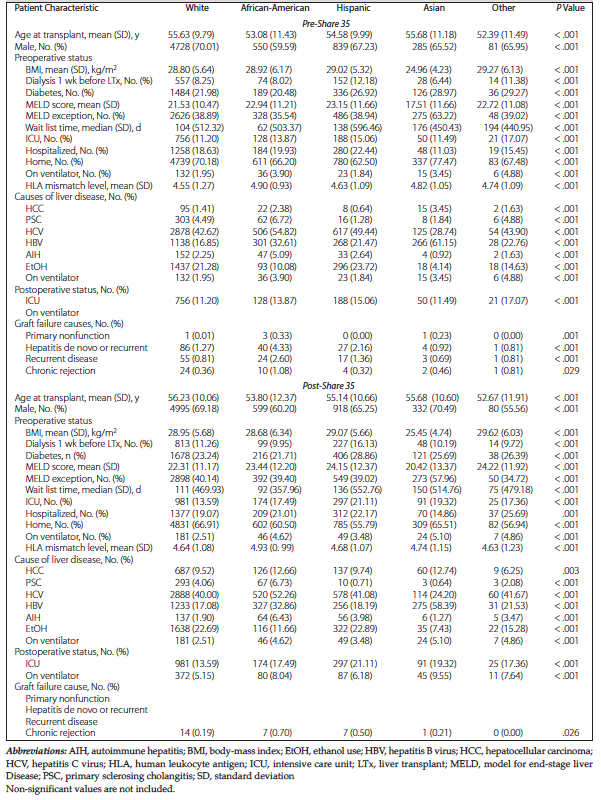 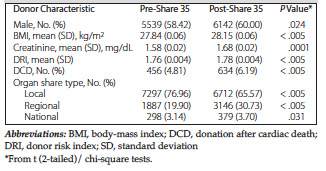 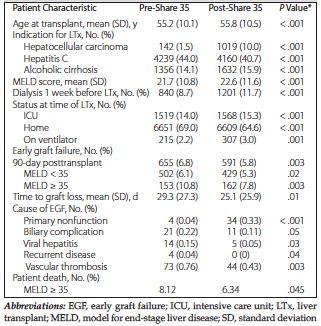 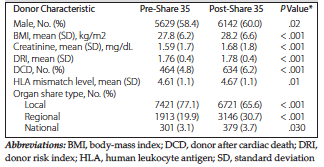 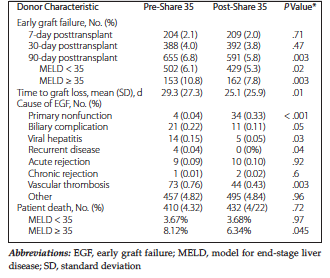 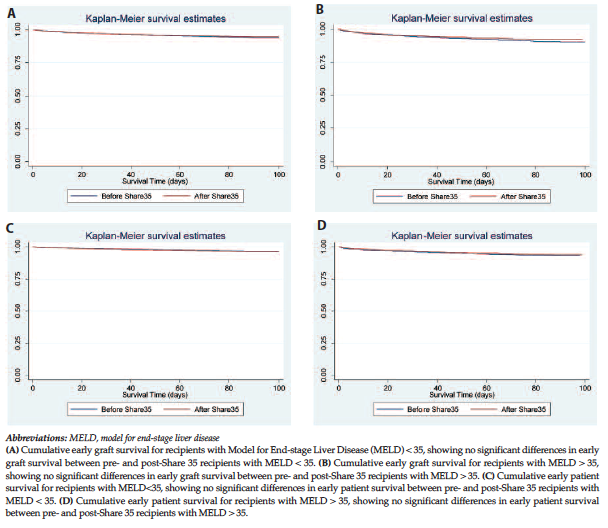