Results: Two rabbits died in group A and group B; all experimental animals from group C survived. Regarding liver biochemical indexes at preoperative week 1, at postoperative month 1, and at postoperative month 3, we found no significant differences (paired t test, P > .05). Liver biochemical indexes between groups were also not significantly different (P > .05). At month 3, postoperative liver pathology of experimental animals showed no significant changes and no cholestasis; biliary epithelial cells were seen in the transplant vascular.

Bile duct injury (BDI) is one of the most serious complications in biliary tract surgery, which can be indicated after trauma, for biliary neoplasms, and for cancer that has infiltrated into the bile duct. Severe bile duct injury can lead to repeated biliary infection, biliary stricture, biliary cirrhosis, liver failure, and even death. Laparoscopic cholecystectomy (LC) has become the standard surgical treatment for gallstone disease and is one of the most routinely performed abdominal procedures by general surgeons. Despite the known benefits of a mini-invasive surgical approach, treatment and prevention of BDI are still challenging because, in most cases, BDI represents a serious problem and can have late complications.1 The incidence of BDI seems to have decreased compared with earlier periods.2 However, several studies have shown a persistently higher rate and complexity of BDI when LC is performed compared with the open procedure (0.3% to 0.6% vs 0.2%).3-6 However, the incidence of BDI in the LC were reported to be different in some retrospective studies.7-9 To date, the best management strategy in terms of timing of repair remains controversial.10-12 Most authors agree that intraoperative recognition of BDI with immediate repair by specialized hepato­pancreatobiliary surgeons offers the best results.13

In recent years, different materials and methods have been reported for BDI repair, with each having different effects. Our study investigated autologous vein graft for repair of BDI using an animal model.

This study was carried out in strict accordance with the recommendations in the Guide for the Care and Use of Laboratory Animals of the National Institutes of Health. The animal use protocol has been reviewed and approved by the Institutional Animal Care and Use Committee (IACUC) of Nanchang University.

Animals
A total of 24 healthy adult male rabbits (age 4-6 mo) weighing 3 ± 0.5 kg were supplied by the experimental animal center of the Medical School of Nanchang University.

Surgical procedure
Under general anesthesia, the rabbit ear vein (0.5-1.0 cm in length according to the requirements of the experimental group) was removed, washed and soaked in physiologic saline solution, and placed in a 1.5-cm silicone stent tube. The silicone tube was bevel shaped at the 2 ends. Resection of the common bile duct was conducted according to the experiment requirements of length. The stent was implanted using 8-0 suture with continuous suturing at the 2 ends. Dry sterile gauze was used to check for bile leakage. We covered the transplant blood vessels with the greater omentum by suturing and fixing the omentum. After the surgical area was washed, we placed a silicone drainage tube next to the bile duct and below the liver; this was externally fixed using 1-0 full thickness silk to suture to the abdominal wall and 0 silk to suture the skin and subcutaneous tissue. Group C had simple cholecystectomy with ends sutured.

Statistical analyses
All data are reported as means ± standard deviation and were analyzed with SPSS software (SPSS: An IBM Company, version 20.0, IBM Corporation, Armonk, NY, USA). Paired t tests were used to compare between groups, with one-sample t test used for comparisons within each group. P < .05 was considered to be statistically significant.

With microscopic examination, we observed simple columnar epithelium over the transplanted vascular, a large amount of fibrous tissue in the outer vascular cavity close to the anastomotic with hyperplasia of epithelial cells, goblet cells, and glands compared with normal bile duct pathology (Figure 1C and 1D). Our postoperative examination showed clear liver tissue structure and liver without cholestasis, a phenomenon shown in diseased liver compared with normal liver tissue pathology (Figure 1A and 1B).

Iatrogenic injury accounts for most bile duct injuries; however, the development of LC to replace traditional laparotomy and its gradually popularization has brought good outcomes to patients. This procedure has also brought a greater risk of BDI, with an incidence rate of 0.3% to 0.6% by LC.14 A literature review had reported some severe complications of bile duct injury, such as bile leakage, bile duct stricture, biliary cirrhosis, and even liver failure without other treatment options but liver transplant and combined with liver vascular injury need liver resection.15 These complications can have serious consequences, such as decreased quality of life, a heavy economic burden, and even death.16,17

End-to-end anastomosis of the bile duct and jejunum Roux-en-Y anastomosis have been widely used for biliary repair. The most commonly used method now is the hepatic duct and jejunum Roux-en-Y anastomosis. Postoperatively, these procedures can lead to intestinal content reflux, peptic ulcers, anastomotic stricture, repeated biliary infection, high calculi recurrence rate, and even cholangiocarcinoma.18,19 Because use of the hepatic duct and jejunum Roux-en-Y anastomosis changes the normal biliary physiology, including disuse of Oddi sphincter function, patients can have higher rates of reflux cholangitis and biliary infection. An interrupted jejunum can also prevent intestinal smooth muscle depolarization, causing jejunum peristalsis function disorder. These changes can affect quality of life; long-term regurgitation-stimulated anastomosis can also lead to cancer.20 Maintaining the function of the Oddi sphincter could prevent various complications caused by regurgitation. We used end-to-end anastomosis for less or no biliary tissue defects. Some studies have shown that end-to-end anastomosis has a good effect, with some patients who have biliary strictures achieving good curative effects by endoscopic treatment.21-24 Regarding avoidance of biliary defects, there must be fully dissociated ligaments around the liver, duodenum, and head of pancreas to ensure the anastomosis without tension. However, damaged blood vessels surrounding the bile duct frequently dissociate, affecting anastomotic healing.

Both biologic materials and artificial materials are being used to repair BDI, to restore the physical channel, and to prevent reflux in patients who have unobstructed lower bile ducts and normal function of the Oddi sphincter. Our experiment used autologous vein end-to-end anastomosis, not only directly reducing the tension of anastomosis and reducing the damage of dissociated ligaments around the liver, the duodenum, and the head of pancreas, but also keeping biliary normal physiology and maintaining normal function of the Oddi sphincter.

Tang and associates used the gallbladder wall to repair the injured bile duct in 21 patients with choledocholith. Patients showed no postoperative complications, and the normal function of the gallbladder was preserved. However, this procedure requires a normal gallbladder, without inflammation, edema, or fibrosis. Patients with cholecystectomy were unable to have this procedure.25 Crema and Trentini and associates used the proximal jejunum and mesenteric vascular for BDI repair. After 6 weeks, complete integration was noted between the bile duct mucosa, tube, and duodenum.26,27 Ebata and associates used the pedicled omentum for cholangioplasty. After 5 weeks, histologically, ordinary biliary epithelium overlaid the surface of the grafted omentum, showing that the omentum can obviously accelerate the healing of the bile duct. The patient has remained well at 3-year follow-up.28 Helmy and associates used the stomach wall, based on a vascularized pedicle with the right gastroepiploic vessels, to repair a biliary defect. Histologic evidence of healing was shown.29 With nonbiologic materials, Nakashima and associates designed a new artificial bile duct consisting of collagen sponge and polypropylene mesh for biliary defects. After 2 weeks, the experimental dogs showed similarly normal bile duct structures.30

Vascular tissue structure has a certain tension like the bile duct and has the advantages of rich materials, simple and convenient for collection. In addition, the vascular tissue has clear structure layers compared with the gastrointestinal serosa layer, which is too thick and difficult for anastomosis. Our experiment used the rabbit ear vein and placement of a silicone tube as biliary stent for BDI repair, which covered the greater omentum, increasing the blood supplied and strengthening the anastomosis area’s anti-infection ability. Our results showed that experimental animal groups had the same survival rate. In addition, liver biochemical indexes at preoperative week 1, postoperative month 1, and postoperative month 3 were not significantly different (paired t test; P > .05). Results were also not significant between groups (P > .05). After the surgical procedure, animals had a high survival rate, good bile duct continuity, unobstructed bile duct, and histologically vascular endothelial cell dif­ferentiated bile duct. The use of blood vessels for BDI repair of a short bile duct coloboma is feasible.

Four animals died as a result of bile leakage and peritonitis, which we thought were related to the experimental conditions. During the dissociation procedure of the bile duct, many blood vessels on the surface of the bile duct were damaged. It is also important that the stent is compatible with bile duct size. A big stent forced into the bile duct may cause high tension in the bile duct wall high, causing ischemia and affecting anastomotic healing and perhaps leading to bile duct necrosis and operation failure. A small stent could result in poor external drainage and increased biliary pressure, leading to anastomosis ischemia or even anastomosis burst because of the high pressure. A small-diameter stent also can become shifted and deformed.

An autologous vein graft can effectively repair a BDI for a short coloboma. However, our experimental follow-up was short, necessitating further research of long-term effects. 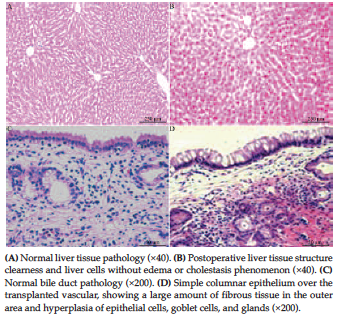