Materials and Methods: We retrospectively reviewed the medical records of 534 patients with end-stage renal failure who were on the deceased-donor renal transplant wait list at Başkent University Faculty of Medicine due to having no living kidney donor available. We evaluated patients with standard 12-lead electrocardiograms, myocardial perfusion scintig­raphy, and coronary angiography. We compared fragmented QRS prevalence versus myocardial perfusion scin­tigraphy abnormalities and severe coronary artery disease. Correlations among these were analyzed.

Coronary artery disease (CAD) is the main cause of morbidity and mortality after renal transplant.1-4 Therefore, substantial financial and workforce resources are allocated to diagnose and treat this condition before renal transplant. To achieve this task, myocardial stress tests, mainly myocardial perfusion single-photon emission computed tomography (myocardial perfusion scintigraphy [MPS]) imaging,5 and coronary angiography are widely used both in our institution and worldwide. The use of these modalities, however, is limited by some of their unfavorable characteristics, including high cost, radiation exposure, invasiveness, contrast allergy, and need for skilled personnel and highly sophisticated equipment.

Myocardial perfusion scintigraphy is associated with a reduced sensitivity for CAD due to balanced ischemia, as well as low specificity, in patients with end-stage renal failure.6-8 Therefore, additional tools for detecting severe CAD may be useful in this population. Fragmented QRS (fQRS) is a relatively novel electrocardiogram (ECG) parameter that reportedly represents myocardial scar. Its use in various diseases, particularly CAD, has been shown.9-12 It remains unknown whether it can be used to detect severe CAD among renal transplant candidates. Herein, we aimed to investigate fQRS on 12-lead ECG for its role to detect severe CAD among end-stage renal failure patients who were waiting for renal transplant.

This retrospective study included 534 patients with end-stage renal failure who were on the deceased-donor renal transplant wait list due to the lack of an available living-donor kidney. Included patients were those seen at the Başkent University Faculty of Medicine, Department of General Surgery, up to July 20, 2017. Patient demographic and clinical infor­mation were obtained from the hospital automation system and written hospital records. Among 534 patients, we enrolled 116 patients who underwent coronary angiography at the Department of Cardiology. Patients had been first tested with gated MPS at the Department of Nuclear Medicine before renal transplant, using technetium-99m as the radiopharmaceutical agent following myocardial stress using exercise or intravenous dipyridamole. Twenty-four patients were excluded because of age less than 18 years, time interval of greater than 3 months between MPS and coronary angiogram, and missing angiographic, ECG, or MPS information. As a result, 92 patients were included in the final analysis.

Myocardial perfusion scintigraphy examinations were reviewed for hypokinetic, akinetic, and dyskinetic myocardial wall motion abnormalities and fixed or reversible perfusion defects. Myocardial segments with akinesis/dyskinesis and/or fixed perfusion defects not attributed to diaphragm or mammary gland attenuation were considered myocardial scars. Reversible perfusion defects were considered to represent ischemic myocardium unless stated otherwise by the examiner. Patient coronary angiograms were reviewed for severe CAD, which was defined as at least 50% stenosis of the left main coronary artery or 70% stenosis of any major epicardial coronary artery, namely, the left anterior descending artery, circumflex artery, and right coronary artery, or one of their branches with a diameter of greater than 1.5 cm.

Standard ECGs taken before MPS and coronary angiography were examined by 2 independent examiners (OÇ and SK) to detect fQRS complexes, as described by Das and associates.13,14 According to this definition, fQRS was defined as an additional R wave (R’) or notching in the nadir of the R wave or the S wave or the presence of > 1 R’ (fragmentation) in 2 contiguous leads, corresponding to a major coronary territory (Figure 1A and 1B). Incomplete right bundle branch block and paced rhythm were excluded. In case of left bundle branch block (QRS ≥ 120 ms), fQRS was deemed positive when there were > 2 R’ waves or notches in the R or S wave.

Statistical analyses
Statistical analyses were performed with SPSS software (SPSS: An IBM Company, version 20, IBM Corporation, Armonk, NY, USA). Normality of data distribution was tested with the Kolmogorov-Smirnov test. Normally distributed continuous variables meeting the parametric test assumptions were expressed as means and standard deviation, with others expressed as medians and minimum to maximum. Categorical variables were reported as number and percentage. Intergroup comparisons were performed with t test for normally distributed data and with Mann-Whitney U test for nonnormally distributed data. We used chi-square or Fisher’s exact test to compare categorical data. Correlation analysis was used to test the linear correlations between fQRS and wall motion abnormalities and perfusion defects on MPS. Correlation analysis was also used to test the correlations between severe CAD and fQRS, any wall motion abnormality on MPS combined with fQRS, any perfusion defect on MPS combined with fQRS, any perfusion defect or wall motion abnormality combined with fQRS, and myocardial scar on MPS plus fQRS.

This study was approved by the Baskent University Institutional Review Board (project No. KA17/252) and supported by the Baskent University Research Fund. Our final analysis included 92 patients who had a median age of 56.5 years (range, 24-80 y). Seventy-one patients (77.2%) were men, and 21 patients (22.8%) were women. Demographic charac­teristics of the patients are presented in Table 1. Patients were on the deceased-donor transplant wait list between 1 month and 10 years at time of study. The median duration from the onset of dialysis to the study date was 5 years (range, 0-24 y). The mean ejection fraction on transthoracic echocardiography was 52.0 ± 11.9%.

In renal transplant recipients, CAD and other cardiovascular diseases are the leading cause of morbidity and mortality, mainly in the form of cardiovascular events, accounting for approximately 50% to 60% of deaths.1-4,15 Therefore, renal transplant candidates need to be meticulously tested for any form of heart disease, particularly CAD with myocardial ischemia. To detect severe CAD, patients often undergo invasive coronary angiography preceded by a number of noninvasive stress tests, mainly MPS. Although a normal MPS result ensures long-term event-free follow-up,16 MPS may have some limitations in this population. These limitations include a relatively lower sensitivity and specificity for CAD,6,7 poor overall fitness in patients, inadequate exercise performance, chronotropic incompetence,17 false negatives due to balanced ischemia causing homogenous tracer uptake,9 reduced sensitivity for severe CAD due to a higher basal adenosine level with increased resting myocardial blood flow and blunted flow reserve challenge by exogenous adenosine,6 and use of antianginal agents (beta-blockers, calcium blockers, and nitrates).18 In addition, CAD-independent perfusion defects and regional wall motion abnormalities can be induced by dialysis, abnormal cardiac microcirculation ventricular hypertrophy, and peripheral arterial stiffness.19-22

In accordance with previous reports, our study suggested that a significant number of renal transplant candidates had abnormal MPS results, with most of our study population having perfusion defects and wall motion abnormalities (94.6% and 78.3%, respectively) and about 70% having reversible perfusion defects and hypokinetic myocardial segments, suggestive of ischemic myocardium. The high prevalence of abnormal MPS results in this population suggests that ancillary noninvasive tests may be useful to detect patients with severe CAD.

Fragmented QRS is a novel ECG parameter that can be assessed from a standard 12-lead ECG. It was first reported to represent myocardial conduction block due to myocardial scar detected by myocardial single-photon emission computed tomography.13 Therefore, fQRS may be helpful to detect prior myocardial infarction. Fragmented QRS was originally described as QRS complexes having an additional R’ wave or notching, with the mechanism believed to be a zigzag conduction around the myocardial scar.13,14 Traditionally, fQRS is sought for on a myocardial territorial basis, namely, the anterior, lateral, and inferior territories. Therefore, fQRS provides an organized location of the myocardial scar and dysfunctional myocardium. Since the original description of the abnormality, its role has been shown in a number of disorders, namely, CAD (ischemic cardiomyopathy),13 nonischemic cardiomyopathy,23 sarcoidosis,24 Brugada syndrome,25 and tetralogy of Fallot.11 In accordance with previous reports, we found that fQRS was significantly correlated with myocardial scar among renal transplant candidates. However, we also noted that it was also significantly correlated with the presence of perfusion defects, indicating it is plausible that at least some fQRS patterns may result from ischemic but viable myocardium with slowed or blocked conduction. Supporting this view, previous reports have indicated slowed or blocked conduction within ischemic but viable myocardium.26,27 Further supporting our view, fQRS combined with abnormal perfusion was significantly correlated with severe CAD, suggesting that this combination may be predictive of severe CAD. Therefore, we suggest that fQRS is indicative of myocardial scar and may also potentially represent ischemic myocardium indi­cative of severe CAD.

This information is clinically important because it may enable fQRS to be used to detect patients with potentially salvageable myocardium who need to undergo noninvasive and invasive testing for obstructive CAD before renal transplant. Although fQRS tended to be correlated with severe CAD, its combinations with myocardial wall motion abnor­malities or scar were not significantly correlated with severe CAD. This was perhaps due to the possibility that wall motion abnormalities on MPS may be more diffuse and independent of severe atherosclerosis in renal transplant candidates.

Limitations
Our study had several limitations. First, a retro­spective study such as ours has inherent limitations. Second, we defined severe lesions as those greater than 70% in vessels other than the left main coronary artery, which is not the case in real life scenarios, where lesions greater than 50% are treated. Hence, the use of a severity threshold of 70% may have increased our specificity at the cost of reduced sensitivity for all parameters studied. Third, we performed a global assessment of fQRS rather than a myocardial territory-based assessment. However, we consider that this parameter may be used as a gatekeeper for performing advanced tests such as MPS or coronary angiography, and a categorical assessment of fQRS (present/absent) may be sufficient in many patients. Future studies may reveal whether territory-based assessment of fQRS would predict ischemic or scarred myocardial territory or coronary artery involved by severe CAD. 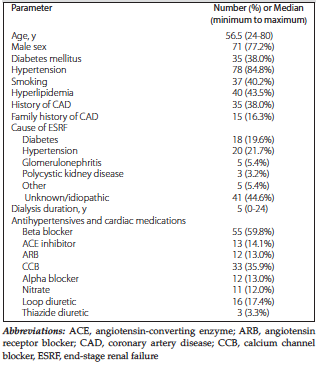 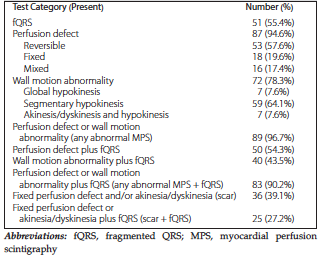 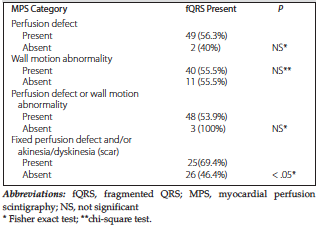 Table 3. Comparison of the Frequency of Fragmented QRS by Myocardial Perfusion Defects, Wall Motion Abnormalities, and Their Combinations in Renal Transplant Candidates 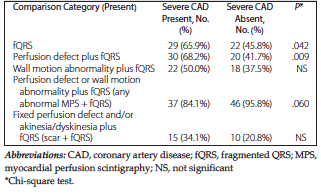 Table 4. Comparison of the Frequency of Fragmented QRS by Myocardial Perfusion Defects, Wall Motion Abnormalities, and Their Combinations in Renal Transplant Candidates 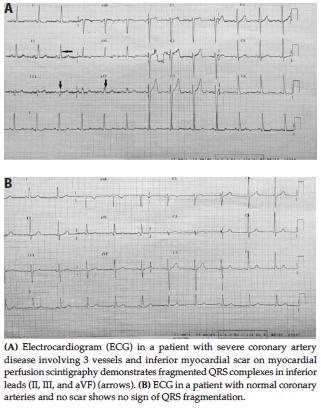