Objectives: Correction of structural urologic disorders and optimization of emptying and storage function of the bladder should be achieved before renal transplant in patients with abnormal urinary bladders to protect the new transplanted kidney. The aim of this study was to determine the outcomes of renal transplant among the differently treated abnormal bladder patients.

Materials and Methods: This was a retrospective study of 30 renal transplant recipients with abnormal bladders who were divided into 2 groups based on abnormal bladder management. Group A included 12 patients who required surgical procedures for their bladder, including 6 with augmentation cystoplasty, 1 with Mitrofanoff procedure, 2 with ileal conduit, 1 with vesicostomy, and 2 who required artificial urinary sphincter. Group B included 18 patients who were treated with oral anticholinergics or beta-3 sympath-omimetic drugs, clean intermittent catheterization, suprapubic catheterization, or a combination of these options. Graft function, survival, and complications were compared between both groups.

Conclusions: The options of abnormal bladder treatment (either by surgical procedures or other methods of treatment) did not have an impact on graft outcome after renal transplant as long as a safe and suitable bladder was achieved.

Patients with end-stage renal disease who have a small-volume, poorly compliant bladder and/or inadequate voiding can benefit from renal transplant as long as the lower urinary tract dysfunctions are corrected either by clean intermittent catheterization (CIC), anticholinergic therapy, or surgery if needed.1

Surgical rehabilitation of the abnormal bladder (such as reconstructive bladder operations, urinary diversion, or artificial urinary sphincter insertion) is sometimes required to make it safe and suitable for the ongoing transplant if conservative measures have failed.2 In the past, urinary diversion was the usual approach to bypass the abnormal bladder. With the use of augmentation cystoplasty and CIC, in small-volume, poorly compliant bladders, a low-pressure and compliant reservoir can be created that can protect the upper urinary tract.1 The aim of this study was to determine outcomes of renal transplant among differently managed abnormal bladders.

Patients were divided into 2 groups based on the need for auxiliary surgical procedures on their bladder. Group A included 12 patients who required surgical procedures for their bladder, including augmentation cystoplasty in 6 patients, Mitrofanoff procedure in 1, ileal conduit in 2, vesicostomy in 1, and artificial urinary sphincter in 2 patients. Group B included 18 patients who were treated with oral anticholinergics or beta-3 sympathomimetic drugs, CIC, suprapubic catheterization, or a combination of these options.

Patient demographics, graft function, survival outcomes, and complications were compared between the groups. Data were collected between May and September 2015. End points were trans-plant failure or last follow-up at end of study. Graft failure was defined as estimated glomerular filtration rate (eGFR) less than 15 mL/min.

Although patients in group A required auxiliary surgical procedures for their bladder, some also required nonsurgical treatments like those in group B (CIC was used in 8 patients, suprapubic catheteri-zation was required in 1, and oral drugs were used in 1 patient from group A).

Furthermore, patients in group B required some surgical procedures to treat the cause of the abnormal bladder itself (such as valve fulguration for PUV patients, epispadias repair, and urethrotomy for stricture urethra) or its complications (such as nephrectomy for nonfunctioning kidneys).

On long-term follow-up, there was no significant difference in overall graft survival in group A versus group B patients (log-rank test; P = .42) as shown by Kaplan-Meier curves in Figure 1.

End-stage renal disease is associated with structural urologic abnormalities in about 15% of patients in the adult population and up to 20% to 30% in the pediatric population.3 An abnormal urinary bladder is no longer a contraindication to renal transplant. With appropriate selection, patient and graft survival outcomes are not significantly different from those of the general transplant population.4

Patients with an abnormal bladder need careful evaluation, and the bladder should be suitable to receive the renal graft. This includes facilitating emptying when spontaneous voiding is not possible, restoring bladder capacity and compliance, and increasing the outlet resistance when sphincter failure causes urinary incontinence, all allowing improved quality of life.5

Most authors have performed the augmentation procedure before transplant. In 1998, Fontaine and associates suggested that reconstructive surgery be done before transplant to avoid the deleterious effects of immunosuppressive drugs on the healing process.6

In a study conducted by Taghizadeh and associates in 2007 to compare the outcomes of renal transplant before and after augmentation cystoplasty, there was no difference between both groups regarding the inpatient stay, the incidence of urinary tract infection (UTI) during the first 3 months after transplant, and renal allograft survival. Three patients in the group transplanted first developed significant ureteric pathology, of which 1 developed graft failure.7

In our study, there were no significant differences in graft survival at 1, 3, and 5 years or the current graft function and the overall graft survival between patients with abnormal bladder who had undergone rehabilitation surgery of their bladder and those who did not undergo surgery of their bladder. In addition, no significant differences were found in the mean eGFR among both groups at 1, 3, and 5 years.

A similar observation was also reported by Srinivasan and associates in 2016 in their study of renal transplant in patients with bladder dysfunction. They found no significant differences in graft survival among patients with normal bladder, those with abnormal bladder who required surgery of their bladder, and those with abnormal bladder who did not require surgery. For these respective patient groups, graft survival rates at 1 year were 92.5%, 85.7%, and 95%; at 5 years, these were 77.3%, 66.6%, and 86.3% (log-rank test; P = .11).9

Although augmentation cystoplasty had no significant impact on graft outcome, the procedure has special difficulties due to the high risk of surgical complications such as UTIs, mucus production, urinary retention, stone formation, metabolic acidosis, spontaneous perforation, and carcinoma development due to immunosuppressive treatment.12

With regard to the surgical complications encoun-tered in our study group, there were no significant differences in the incidence of all postoperative complications except wound infection, which was significantly higher in patients with abnormal bladder who required surgical interference than in those who did not require surgery (33% vs 5%; P = .04).

Another multi-institutional review on renal transplant in patients with diversion or aug-mentation included 20 patients with bladder augmentation, 8 with continent diversion, and 23 with incontinent diversion, with all receiving deceased-donor renal transplants. Thirteen of 51 patients (25%) required reoperations. Among these, there were 3 ureteral complications, 3 urinary stones, and 1 adenocar-cinoma of the pouch. The incidence of UTI was 18%.14

Although our study was retrospective, not randomized, and had a small sample size due to the low incidence of abnormal bladder as a cause of renal failure, the results were comparable with the previously published reports in the literature.

Because of the complex nature of the disorder and the various patients with the disorder, it is essential to provide a careful and individualized evaluation of the lower urinary tract before transplant and provide a strict postoperative follow-up to diminish and control possible urologic complications. Because no sound guidelines or protocols presently exist for the care of patients with lower urinary tract disorders and end-stage renal disease, it is necessary to design randomized multicenter studies with large sample sizes for better evaluation of those patients with abnormal bladders who require renal transplant.

In conclusion, the approach of abnormal bladder treatment (either by surgical procedures or all other methods of treatment) did not have a significant effect on graft function, survival, and postoperative complications after renal transplant as long as a safe, low-pressure, and suitable bladder was achieved. 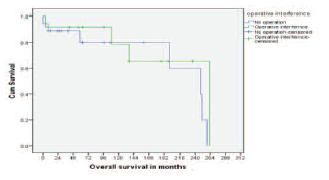 Figure 1. Kaplan-Meier Graft Survival Curves Among Patients Who Required Operative Procedures for Their Bladder (Group A) and Those Who Did Not (Group B) 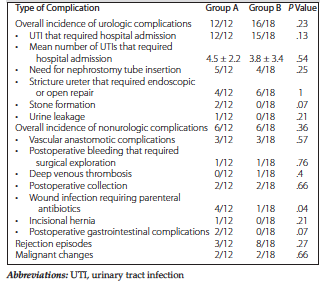