Arterial injuries in graft organs may be recognized during procurement and may contribute to organ waste. These injuries may be more likely in the presence of abnormal anatomy. We observed 2 liver grafts that had hepatic artery thrombosis in the donor vessels. The graft from a 64-year-old woman who had circulatory death was discarded because of potential decreased perfusion of the lobe and risk of thrombosis extending to the main hepatic artery after transplant. The graft from a 68-year-old woman donor who had brain death was used successfully as a reduced-size liver graft that included the caudate lobe. In summary, donor grafts that have hepatic artery thrombosis may or may not be used in transplant, depending on the cause of donor death, graft quality, and anatomic location of donor hepatic artery thrombosis.

Arterial patency is important for the success of any solid-organ transplant. Many factors may contribute to hepatic artery thrombosis (HAT) after liver transplant and may cause graft loss. Arterial injuries sustained during organ procurement occur in 1% to 12% transplants and contribute to the discarding of the graft.1 These injuries are more common in the presence of abnormal anatomy and grafts from donation after circulatory death (DCD).

Although it is rare for HAT to occur in the donor blood vessels (dHAT), the presence of dHAT is important. The cause of dHAT may be multifactorial. In DCD donors, hypotension and sluggish circulation after treatment withdrawal may cause thrombosis in visceral blood vessels. Furthermore, postmortem clot formation may occur during the time between cardiac asystole and aortic perfusion, and these clots may embolize to distal locations after pressured organ perfusion is started. In grafts from donation after brain death (DBD), inadvertent traction injury to the blood vessels during warm phase dissection may cause a fresh thrombus to form in the donor hepatic artery.

The dHAT may cause poor perfusion of the graft and insufficient organ preservation that may cause graft failure. Therefore, the use of grafts that have thrombosis or vascular injury may be risky.2 However, availability of grafts are limited because of a high demand.

We treated 2 patients who had dHAT. The purpose of this report is to discuss possible strategies to minimize the risk of discarding a graft.

Case 1
A 64-year-old female DCD liver graft donor (body mass index, 21.6 kg/m²) was treated in the intensive care unit (13 d) after hypoxic brain injury caused by a cardiac arrest. The results of her liver function tests were normal. After withdrawal of life-sustaining treatment, asystole occurred and donor warm ischemia time was 11 minutes. Graft retrieval was performed with rapid technique by the local procurement team. The graft weighed 1400 g and had normal anatomy. Steatosis was mild and the graft was deemed usable for transplant. However, on the preparation table at transplant, left HAT was observed (Figure 1). The graft was discarded because of potential decreased perfusion of the lobe and risk of thrombosis extending to the main hepatic artery after transplant.

Case 2
A 68-year-old female DBD liver graft donor (body mass index, 24.5 kg/m²) was treated for 5 days in the intensive care unit. Past medical history included hypertension, excision of right breast intraductal papilloma, hysterectomy, and prolapsed bladder. She was an occasional drinker and smoker. The results of her liver and kidney function tests were normal. The liver was procured, and plans were made for use in a transplant at another hospital, but the graft was declined after the retrieval at the donor hospital because of the presence of vascular thrombosis. There was a thrombus located in the large left replaced hepatic artery from the left gastric artery in the donor liver (Figure 2). The graft had very good quality despite the thrombus. Therefore, segments II and III were removed with a harmonic scalpel on the preparation table at transplant and the remaining liver was used as a reduced-size liver graft. The right extended graft included the caudate lobe (segments I, IV, and VIII).

The donor was matched with a 55-year-old female recipient (body mass index, 17.3 kg/m²; Model for End-Stage Liver Disease score, 18) who had transplant for treatment of primary biliary cirrhosis. The transplant was performed with a piggyback technique, and the donor right hepatic artery was anastomosed to the common hepatic artery of the recipient. Postoperative treatment was based on a standardized immunosuppression and anticoagulation protocol. There were no complications during or early after transplant. Doppler ultrasonography on postoperative day 8 showed that all vessels were patent. The recipient was discharged from the hospital on postoperative day 10 and she had good liver function. Follow-up at 6 months showed no complications.

Risk factors for the development of HAT include the arterial reconstruction technique or presence of vascular injury, and the development of HAT may decrease graft and patient survival.3,4 Surgical handling may cause damage during organ procurement, and no other specific donor-related factors are correlated with liver injury (cause of death, donor age, donor sex, or graft transport).5

In case 1, the graft had good quality for transplant but the presence of left hepatic artery thrombosis made it a high-risk graft. The DCD graft would not have tolerated the prolonged surgical preparation to remove the affected segments supplied by the thrombosed blood vessel. Furthermore, the thrombus appeared before death, and preservation of the segments affected may have been compromised. Discarding the graft was justified because the use of this graft would have been risky. In case 2, the DBD source of organ donation provided sufficient cold ischemia time to enable graft preparation. The aberrant vascular supply may have favored the decision to use the graft because the perfusion of the right lobe was independent of the thrombosed left hepatic artery.

The present cases suggest a possible strategy to address graft damage, especially presence of dHAT. If thrombosis is present in 1 aberrant vessel, the graft may be used after resection of the affected segments (cut-down liver graft). This approach may be risky with severely fatty liver or DCD grafts because these grafts may not tolerate prolonged cold ischemia. However, this strategy may be an option for DBD grafts and may minimize organ waste. 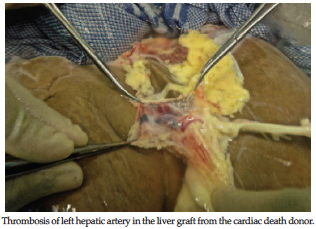 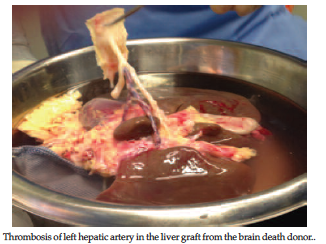