Cytomegalovirus disease is a frequent infection of the early posttransplant period. Late-onset disease is common in patients receiving chemoprophylaxis. Here, we report 2 cases of cytomegalovirus gastritis, occurring late in the posttransplant course, with undetectable viral load in the patients’ blood, in patients not receiving valganciclovir prophylaxis and not having the classic risk factors described herein. Patients presented with chronic diarrhea and gastric bleeding late in the posttransplant course. Diagnoses were based on endoscopic gastric biopsy. Patients were treated successfully with ganciclovir/valganciclovir. Because preventive strategies are unclear in late-onset disease in persons at low risk, early diagnosis and treatment are crucial.

Cytomegalovirus (CMV) is a frequent cause of infection in renal transplant recipients. The disorder leads to significant morbidity and is associated with an increased risk of developing acute rejection and chronic allograft injury.1 While the viral syndrome is the most common presentation, approximately one-third of patients present with end organ disease.2 Stomach involvement is infrequent. While tissue-invasive CMV disease is more common during the early posttransplant period, we describe 2 cases with late-onset CMV disease in which patients were thought to be at low risk of developing CMV disease after transplant.

Case 1
In August 2010, a 42-year-old woman with end-stage renal disease of an unknown cause underwent a living-donor renal transplant. Her husband provided the donor organ. In view of one haplotype match, she did not receive induction immunosuppression. Immediate and stable graft function was achieved posttransplant, and she was maintained on tacrolimus, mycophenolate mofetil (MMF), and prednisolone. Both donor and recipient were CMV seropositive (D+/R+). The patient received no CMV prophylaxis.

Sixteen months posttransplant, she presented with chronic diarrhea and was treated for giardiasis. Thereafter, she was seen at the hospital repeatedly for diarrhea, generalized weakness, weight loss (10 kg during the course of 4 months), and epigastric and periumbilical pain that increased on exertion.

On examination, the patient was normotensive, pale, without edema or icterus, and she had a soft abdomen that was tender in epigastric and periumbilical area. The complete blood count showed a hemoglobin level of 85 g/L, total leukocyte count of 4.5 × 109/L, and a platelet count of 220 × 109/L. The patient’s serum creatinine concentration had increased from baseline of 132.6 μmol/L (1.5 mg/dL) to 176.8 μmol/L (2 mg/dL). The results of the following tests were within normal limits: liver functions, an ultrasonography of the abdomen, urinalysis, stool examination, serum amylase, and blood lead level. A urine porphobilinogen was negative. A noncontrast enhanced computed tomography scan of abdomen was normal, as were a barium meal and a barium follow-through. The results of an upper gastro-intestinal endoscopy revealed normal gastric mucosa and granular whitish mucosa in the second part of the duodenum. However, the results of the biopsy specimen obtained from this part were normal. The results of a colonoscopy and mapping biopsy from the colon were normal. The patient’s symptoms persisted despite empirical therapy with proton pump inhibitors and anti-Helicobacter pylori agents.

In June 2012, a gastrointestinal endoscopy was repeated, which showed linear erosions in the distal body and the antrum of the stomach, associated with ulcerations. A biopsy specimen showed mildly edematous lamina propria with lymphocytic infiltrates. Multiple CMV inclusions, both cytoplasmic and intranuclear, were seen in the gastric glands. Immunohistochemical staining with CMV specific-labeled antibody was positive (Figures 1 and 2). A diagnosis of CMV gastritis was made. The patient’s CMV viral load in the blood by polymerase chain reaction (PCR) was below the detectable limit. The patient’s MMF was stopped, and she was treated with intravenous ganciclovir 2.5 mg/kg/day (according to the estimated glomerular filtration rate) for 21 days, followed by oral valganciclovir for 3 months. After beginning this therapy, her symptoms began to improve in 10 to 15 days. She did not tolerate the ganciclovir well, and this therapy had to be stopped twice because of leucopoenia that required administration of granulocyte colony-stimulating factor. The results of a repeat gastric biopsy showed healing of the lesions with an absence of inclusions on histopathology.

Case 2
In July 2008, a 32-year-old man with end-stage renal disease of an unknown cause underwent a deceased-donor renal transplant. He had been undergoing hemodialysis for the 8 years preceding. He received induction immunosuppression with basiliximab, followed by maintenance treatment with tacrolimus, MMF, and prednisolone. The donor as well as the recipient were CMV immunoglobulin-G positive before the transplant. Immediate and stable graft function was achieved after the transplant. The patient did not receive CMV prophylaxis.

In May 2012, the patient presented with epigastric pain, melena, and generalized weakness of 1 month’s duration. He was conscious, normotensive, and pale, without edema or icterus, and results of a systemic examination were unremarkable. Laboratory analyses revealed the following: a hemoglobin level of 53 g/L (5.3 g/dL), a total leukocyte count of 8.47 × 109/L (8.47 × 103/μL), and a platelet count of 179 × 109/L (179 × 103/μL). The patient’s serum creatinine level had increased from baseline of 106.08 μmol/L (1.2 mg/dL) to 141.44 μmol/L (1.6 mg/dL). The results of his liver function tests were within normal limits. After initial stabilization (which included 2 packed red cell transfusions), he underwent an upper gastrointestinal endoscopy. Erythematous patches of mucosa, along with erosions, were noted in the fundus, the antrum of the stomach, and the first part of the duodenum. Biopsy results of the lesions showed magenta-colored intranuclear inclusion bodies in the antrum and gastric gland epithelial cells. There was no metaplasia or presence of Helicobacter pylori. Immunohistochemical staining with CMV specific-labeled antibody was positive. Diagnosis based on histopathology was mild chronic gastritis secondary to CMV. Cytomegalovirus viral load in the blood by PCR was below the detectable limit. During the course of the illness, the patient’s serum creatinine level increased to 194.48 μmol/L (2.2 mg/dL) and then gradually stabilized at 159.12 μmol/L (1.8 mg/dL). The patient was treated with intravenous ganciclovir 2.5 mg/kg/day (according to the estimated glomerular filtration rate) for 21 days, followed by oral valganciclovir 450 mg daily for next 3 months. His MMF was stopped. Within 7 days of beginning this therapy, his symptoms improved. After 1 week of therapy, the results of a stool culture were negative for occult blood. The patient could tolerate the ganciclovir and valganciclovir with no documented episodes of leucopoenia.

We report 2 cases of CMV gastritis, occurring late in the posttransplant course, with undetectable viral loads in the blood, in patients not receiving valganciclovir prophylaxis and not having the classic risk factors described in the literature.

Valganciclovir prophylaxis in high-risk patients has probably led to the occurrence of CMV infection in late posttransplant period.3 Cytomegalovirus gastritis accounts for approximately 7% of all the CMV infections after transplant, almost all occurring during the first year.2 Cytomegalovirus gastritis presents with epigastric pain, which may be postural at times, along with nausea, bleeding, and anorexia. Endoscopic findings include mucosal erythema, erosions, and ulcers. Diagnosis depends on histopathology including eosinophilic intranuclear inclusion bodies, immunohistochemistry, and CMV PCR.1,4 While there are no randomized controlled trials, treatment generally consists of intravenous ganciclovir for 3 weeks followed by secondary prophylaxis with valganciclovir for 3 months.1 A reduction in the overall level of immunotherapy is often recommended. Donor-positive and recipient-negative CMV statuses are the strongest risk factors for developing CMV disease.5 Other risk factors include rejection episodes, and the use of antilymphocytic drugs, simultaneous pancreas transplant, use of cyclosporine, and chronic graft dysfunction.2

In the RESITRA Network of the Spanish Study Group of Infection in Transplantation study,2 where approximately 44% of the late-onset cases (> 100 days posttransplant) had end-organ disease. Seven cases of CMV gastritis occurred in first year after kidney transplant.

Both of our patients were on MMF. Earlier MMF trials show an increase in tissue-invasive CMV infection without specific reference to the gastrointestinal tract,6,7 although this has not been found consistently in other studies.8,9 Both of our patients had CMV-positive serology status before transplant. The man (our case number 2) had received basiliximab as induction immuno-suppression, but neither patient received anti-thymocyte globulin or treatment for acute rejection. Even in absence of classic risk factors for CMV, they developed late-onset tissue invasive disease.

Qualitative CMV PCR assays are sensitive and are recommended for diagnosing and monitoring the response to therapy.1,10 In a clinical scenario like ours, where the PCR results are negative, it is difficult to decide on the duration of therapy. Our decision of duration of therapy was based on improvement in symptoms and endoscopic features.

Occurrence of late-onset CMV disease is an important issue in routine chemoprophylaxis strategy. However, its epidemiology must be studied in a low-risk population. A high index of suspicion is required for the diagnosis, especially when CMV DNA PCR is undetectable. Effective preventive strategies remain to be discovered, giving impor-tance to early diagnosis and prompt treatment. 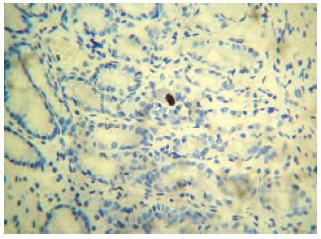