Objectives: Skin grafting has been evolving as an important application in reconstructive surgery. Mixed reports about the survival of allogeneic and xenogeneic keratinocytes require further sub-stantiation to determine the role of these cells in wound healing.

Materials and Methods: Rabbit and rat skins were harvested and cultured in vitro. Full-thickness wounds were created on the dorsum of rabbits (2 cm × 2 cm; n = 4). Cultured epithelial autograft, allograft, and xenograft cells were sprayed onto 3 freshly created wounds, with 1 wound acting as a control. The wounds were monitored every 2 days for 4 weeks. After 4weeks, the rabbits were killed; skin biopsies were taken from each healed wound and stained with hematoxylin and eosin, and epidermal thickness was measured.

Results: All examined grafts showed favorable healing outcomes because the wounds appeared similar to normal skin upon healing. The only observed significant difference was the thickness of the epidermis layer, which was thinner in the xenograft (P = .002) than the autograft or allograft. Morphologic evaluation of the skin surface showed that the rat skin was thinner than the rabbit skin. The graft that achieved the best result was the autograft because the thickness was similar to and mimicked normal skin.

Conclusions: All 3 grafts (autograft, allograft, and xenograft) have the potential to reconstitute epithelial defects. This approach can overcome the limitation of autologous skin donor sites, especially in burn cases.

The epidermis performs important functions, including protecting the organism from environ-mental hazards such as microbes and stress and keeping fluids inside the body.1 The main cell type in the epidermis is the keratinocyte, which constitutes > 80% cells in the epidermis.2

Wound healing is a complex, dynamic process that involves the migration and proliferation of cells, such as fibroblasts, endothelial cells, and epithelial cells, and the migration of cells originating from the blood, such as thrombocytes, macrophages, and neutrophils.3-7 Normal wound healing occurs in 3 different phases. The first phase involves hemostasis and inflammation, and this is followed by the second (cellular) phase of fibroplasia and proliferation and the third phase of maturation and remodeling.8-10

Currently, skin grafting has been evolving as an important application in reconstructive surgery. The limited availability of autologous normal skin donor sites for grafting has been a focus of research. The aim of this study was to explore other effective methods for overcoming this limitation by using cultured allograft and xenograft keratinocytes. Previous studies on composite skin have attempted to resolve this issue. Qian and coworkers11 reported promising results using rat keratinocytes cultured on acellular pig dermis to develop a graft of cultured keratinocytes with acellular xenograft dermis. Clinical studies have shown that a cultured skin substitute consisting of a bilayer of allogeneic keratinocytes and fibroblasts in a xenogeneic collagen matrix can be used as a graft to accelerate the healing of acute and chronic wounds.12 However, literature search showed no studies that compared cultured allograft and xenograft keratinocytes. The focus of this study was to compare cultured autograft, allograft, and xenograft keratinocytes transplanted into full-thickness wounds of a rabbit in vivo.

Excising skin samples
This study was approved by the Animal Ethics Committee, Universiti Sains Malaysia (animal ethics approval 2010/54/192; March 18, 2010). The experiment was conducted at the Animal Research and Service Center of Universiti Sains Malaysia Health Campus. Skin samples from 10 adult male New Zealand white rabbits and 3 adult male Sprague-Dawley rats were collected under sterile conditions. Full-thickness skin biopsies (2 cm × 2 cm) were excised from the dorsum of the animals. The skin samples were placed in a transport medium and taken to the laboratory for keratinocyte cell culture and use as autografts and allografts for the rabbits and xenografts for the rats (Figure 1).

Culture of rabbit and rat primary epidermal keratinocytes
The rabbit and rat skin biopsy specimens were washed and minced into small pieces using a scalpel. The minced pieces were placed in a centrifuge tube containing 0.6% dispase (Sigma-Aldrich, St. Louis, MO, USA) and 1% antibiotic-antimycotic solution overnight at 4°C. The following morning, the specimens were separated into epidermis and dermis layers. The epidermis was transferred to a 50-mL centrifuge tube, and 10 mL prewarmed trypsin solution was added (Invitrogen Corporation, New York, NY, USA). The specimens were incubated at 37°C for 10 to 15 minutes. A 10-mL solution of Dulbecco Modified Eagle Medium (Life Technologies Corp., New York, NY, USA) with 10% fetal bovine serum (Invitrogen) was added to deactivate the trypsin. The specimens were carefully transferred by pipette and filtered using a 70-μm nylon cell strainer (Becton Dickinson, Franklin Lakes, NJ, USA) to separate the keratinocytes and epidermis layer. The suspension of keratinocytes was centrifuged at 1500 rpm for 5 minutes. The supernatant was aspirated, and fresh keratinocyte medium for rabbit keratinocytes (CnT-57, CELLnTEC Advanced Cell Systems AG, Bern, Switzerland) or rat keratinocytes (CnT-03, CELLnTEC) was added to the cell pellet, which was gently resuspended. The viable cells were cultured at 4 × 104 cells/cm2 in T-25 culture flasks at 37°C and 5% carbon dioxide.

Surgical procedure for rabbits
All rabbits were given a preanesthetic dose of atropine (1 mg/kg intramuscular) and xylazine (5 mg/kg intramuscular) and anesthetized using ketamine (35 mg/kg intramuscular). Full-thickness wounds (4 wounds; approximately 2 × 2 cm each) were created on the dorsum of the rabbits. A silicone ring was used to compartmentalize the wounds and prevent epithelialization at the wound edges (Figure 2). Cultured epithelial autografts and allografts from the rabbits and xenografts from the rats were sprayed from a distance of 10 cm onto 3 freshly created wounds with fibrin (Tissomat, Baxter AG, Vienna, Austria). No cells were added to 1 control wound (Figure 2). The cell seeding density ranged from 1.2 to 1.7 × 106 cells/mL. The wounds were dressed with a foam dressing (Mepilex, Molnlycke, Gothenburg, Sweden) and inspected daily for signs of infection. The wounds were monitored every 2 days for 4 consecutive weeks. The study was terminated after 4 weeks; the animals were killed with an overdose of sodium pentobarbital (150 mg/kg intramuscular), and a skin biopsy was taken from each healed wound and stained with hematoxylin and eosin.

Hematoxylin and eosin staining
Biopsies from the graft tissues were fixed in 10% neutral buffered formalin solution for 48 hours. The grafts were processed and embedded in paraffin for cutting. Tissue sections (5 μm) were stained with hematoxylin and eosin (Sigma-Aldrich) according to a standardized laboratory protocol.13 The slides were mounted using distyrene plasticizer xylene and examined (Mirax scanner and viewer, Carl Zeiss, Oberkochen, Germany).

Statistical analysis
The data were statistically analyzed (IBM SPSS Statistics, Version 20.0, IBM Corp., Armonk, NY, USA) for non parametric testing. The numeric variables were reported as median and interquartile range. The differences in means between the groups were analyzed using Mann-Whitney test. Com-parison of the epidermis measurement (n = 10) was expressed as mean ± standard error of the mean.The level of significance was set at P ≤ .05.

Macroscopic observation of wound healing
After 28 days, all wounds had healed in a similar manner without any graft rejection. Macroscopic observation showed that all wounds had healed, based on signs of positive healing including minor hyperemia, elevated contour, and pale skin appearance. All grafts followed the normal wound healing process (Figure 4).

Epidermal thickness measurement of each graft compared with control
Comparison of the epidermis measurement (mean ± standard error of the mean) showed that the greatest epidermal thickness was recorded for the autograft (28.17 ± 2.14 μm). The thickness of the autograft was greater than control by 16.89%. Additionally, no significant differences were noted (P = .140). The allograft had mean thickness 25.52 ± 2.08 μm and was greater than control by 5.56%, and the differences between the groups were insignificant (P = .545). Conversely, xenograft thickness was 16.83 ± 1.12 μm and was less than control by 30.17%. The difference between the xenograft and control groups was significant (P = .002) (Figure 6).

The grafting of cultured cells as skin replacements did not become a clinical reality until the work of O’Connor and coworkers, which was the first study to deliver autologous keratinocyte sheets to burn patients in 1981.14 The use of grafts cultured from autologous cells is limited by the availability of suitable donor sites, time required for growth of the cells in vitro, and need for the removed donor skin to expand in culture.15 Therefore, a variety of allogeneic keratinocyte sheets have been produced by several groups and have been used to successfully heal burn and venous wounds since the 1980s. Currently, scientists have broadened this field of research to use xenografts as a skin substitute. Previous studies about wound healing in severe combined immunodeficiency mice using a cultured human skin substitute have shown that wounds can be healed by the rapid reepithelialization of human keratinocytes.16 Moreover, frozen, cultured human epidermal keratinocyte sheets have been used to increase the healing of full-thickness wounds in mice. Although the cultures remained on the wound bed for a short time, histologic analysis of tissue sections from the wounds showed that they promoted the formation of epithelial coverage, basement constituents, and granulation tissue.17

In this study, all wounds healed within 28 days. All examined grafts showed favorable healing outcomes because the wounds appeared similar to normal skin upon healing.The present study focused on the histologic observations of the transplanted grafts. The results showed that all transplanted grafts, including the xenograft, healed without graft rejection at the wound site. Additionally, no major differences were observed in histologic observations between the grafts and normal tissue sections. The only observed difference was related to the thickness of the epidermis layer in the xenograft transplant, which was thinner than the autograft or allograft (Figure 4). This result was due to the morphologies of rat and rabbit skin because rat skin is thinner than rabbit skin. The autograft had the best results because the resulting epidermis was the thickest, followed by the allograft and xenograft. There was no rejection, and cultured rat epidermal keratinocyte xenograft can be used as an autograft and allograft skin substitute.

The use of cultured allogeneic and xenogeneic keratinocytes can be beneficial for wound healing. Therefore, further studies should be conducted to elucidate the basis of the immunologic reactions. Flow cytometry or enzyme-linked immunosorbent assays may be used to analyze the surface marker antibodies and detect the occurrence of rejection, primarily in the host bloodstream upon graft transplant. Mixed reports about the survival of allogeneic keratinocytes require substantiation to determine the role of these cells in wound healing. Furthermore, literature search suggested that this was the first study in rabbits involving the transplant of xenografts. Previous studies had been performed on other animals, such as rats and pigs. When the immunologic basis of the survival of allogeneic and xenogeneic keratinocytes is fully understood, a human clinical study could be conducted to aid in the healing of burn wounds.

In conclusion, based on this animal model study, all 3 grafts (autograft, allograft, and xenograft) have the potential to re-epithelialize. However, autografts and allografts are more suitable for use as a skin substitute. This approach can overcome the limitation of autologous skin donor sites, especially in burn cases. A prefabricated skin replacement could be developed in the future that could benefit numerous patients who have burn injuries. 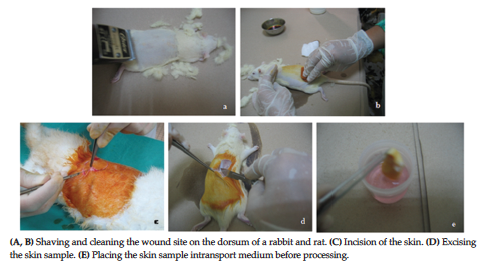 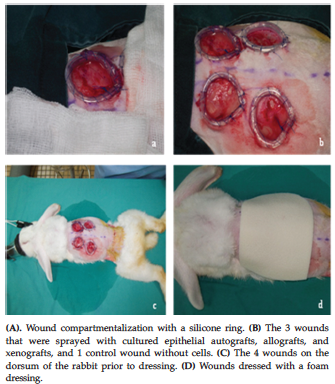 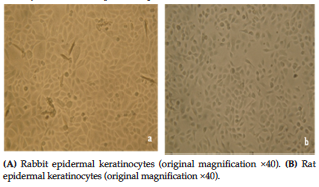 Figure 3. Epidermal Keratinocytes Were Attached to the Flask and Formed a Flat Layer of Stratified Squamous Epithelial Cells 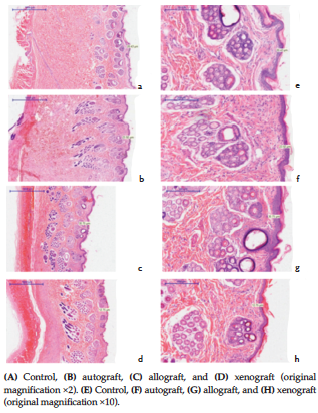 Figure 5. The 3 Layers Forming The Skin (Outer Epidermal, Dermal, and Subcutaneous Layers) Could Be Identified in All Skin Sections Figure 6. Epidermal Thickness of the Autograft, Allograft, Xenograft, and Control

Table 1. Epidermal Thickness Measurement For Each Graft Compared With Control