Objectives: Very small embryoniclike stem cells are a population of small stem cells with embryonic characteristics that were identified in adult murine bone marrow. During the past decade, researchers examined different alternatives for functional recovery after spinal cord injury. The aim of this study was to evaluate transplant of very small embryoniclike stem cells in a spinal cord injury rat model, and investigate cell migration to the lesion sites and the effects of cells on lesion size and overall functional recovery of the injured rats.

Conclusions: Very small embryoniclike stem cells may be a good source of stem cells for transplant into injured tissue of rat spinal cord for regeneration because they contain both embryonic and adult stem cell characteristics.

Very small embryoniclike stem cells (VSELs) are a population of small stem cells with embryonic characteristics that were identified in adult murine bone marrow.1 The VSELs express stem cell markers (Sca-1 in mice; CXCR4 and CD133/CD34 in humans). These cells are CD45– Lin– which indicate that they are nonhematopoietic stem cells. The VSELs can mobilize and migrate to injured tissue through the circulatory system.1,2 They can differentiate into different cell types and repair injured tissue.3,4

During the past decade, researchers examined different alternatives for functional recovery after spinal cord injury (SCI). The most common injury mechanism is contusion of the spinal cord, in which compression caused by structures around the spinal cord may result in direct damage to spinal cord tissue.4 Investigators showed that stem cell transplant may inhibit neural necrosis, inhibit inflammatory response, and induce axonal regeneration. It is believed that among various cell types examined for treatment of SCI, VSELs may be more effective for SCI repair because of the embryonic and adult stem cell characteristics of VSELs.5,6

In this study, we transplanted VSELs to an SCI rat model and investigated the migration of VSELs to the lesion sites and the effect of VSELs on the lesion size and overall functional recovery of the injured rats.

Animals
Adult male Wistar rats (250-300 g) were purchased (Pasteur Institute) and housed under standard conditions with 12-h light/12-h dark cycle with free access to food and water. All animal work was approved by the ethical guidelines for the Care of Laboratory Animal Science Association of Iran. The rats were randomly divided into 5 groups of 5 rats each: (1) control group with SCI; (2) sham group with laminectomy only; (3) vehicle group 1 received PBS 7 days after SCI; (4) vehicle group 2 received C2C12 cells 7 days after SCI; and (5) experimental group received VSELs through the tail vein 7 days after SCI.

Rat model of spinal cord injury
Rats were anesthetized by intraperitoneal injection of 60 mg/kg ketamine hydrochloride (Worden, Holland, MI, USA) and 5 mg/kg xylazine hydrochloride (Worden). A midline linear incision was made over the T8 to T10 spinous processes. The animals underwent laminectomy at the T8 to T10 vertebral segment and, the spinal cord of all rats (except for the sham group) was compressed dorsoventrally with a 20-g clip at T8-T10 for 1 minute.7 Postoperative care treatment included intramuscular injection of penicillin and streptomycin (Invitrogen) and manual bladder emptying twice daily.

Transplant of very small embryoniclike stem cells
Expanded VSELs were labeled with 1 μg/mL DiI (CellTracker CM-DiI, Invitrogen) for 5 minutes at 37°C and for an additional 15 minutes at 4°C. The cells were washed and suspended in PBS at a density of 1 × 104 cells/μL. Cell viability was assessed by trypan blue exclusion and observation with a fluorescence microscope (Olympus). The final number of cells was adjusted to 1 × 106 cells/200 μL. The VSELs were injected intravenously through the tail vein at 7 days after injury.

Behavioral analyses
Behavioral assessment after spinal cord contusion was performed with the Basso, Beattie, and Bresnahan (BBB) locomotor rating scale.8 The BBB score ranged from 0 (no hind limb movement) to 21 (normal movement). The BBB test was performed at 3 days after injury and repeated weekly until week 8.

The VSELs were sorted based on the presence of 3 surface markers (CD45, CXCR4, and Sca-1) (Figure 1). Fresh isolated VSELs were cocultured with a C2C12 myoblast feeder layer, and spherelike clusters were formed in medium after 10 to 12 days (Figure 1). Immunofluorescence images of VSELs showed expression of SSEA-1, CXCR4, Oct4, and Sca-1 markers (Figure 1). Cross sections of Nissl-stained injured spinal cord tissue in the control group showed cavity formation on both sides of the spinal cord (Figure 2). Nissl stain of injured tissue in the experimental group showed that the cavity size was decreased in the experimental than control group, and quantification of cavity size showed significant differences between the control and experimental groups (P < .05) (Figure 2). Fluorescence microscopic images from injured spinal cord tissue of the experimental rats revealed localization of the DiI-labeled VSELs at the lesion site 7 weeks after transplant of VSELs. Migration of DiI-labeled VSELs to the injured site was observed (Figure 2).

Real-time RT-PCR analyses indicated that in the experimental group, transplanted VSELs expressed neural markers in injured tissue, and the levels of mRNA expression of GFAP, nestin, Olig-1, and β-111 tubulin markers were significantly higher in the experimental than the other groups (P < .05) (Figure 3).

To assess whether VSELs promoted functional recovery after transplant into the injured sites, the BBB test was performed and showed improvement in locomotor function in the at 2 weeks after injury and was noticeable at 7 weeks after transplant. Improvement was significantly greater in the experimental than other groups (P < .05) (Figure 4).

The results of this research showed that VSELs could have the potential of moving to the injured site of rat spinal cord. According to previous studies, VSELs are deposited during embryonic life in bone marrow and could be used for tissue regeneration.9 We isolated these small stem cells (VSELs) by FACS based on CD45- , Sca-1, SSEA-1, and CXCR4 markers as previously reported.10, 11 The Sca-1, SSEA-1, Oct4, and CXCR4 are markers characteristic of embryonic stem cells,12 and CD45- shows that VSELs are nonhematopoietic stem cells.13, 14

In this study, VSELs were cultured on a C2C12 feeder layer that inhibited spontaneous differentiation of VSELs by a signaling pathway and induced VSELs to grow new embryoniclike bodies.2,9,13 The VSELs can migrate naturally from bone marrow to other tissues and be incorporated with regeneration of injured tissues.15 The CXCR4 receptors of VSELs may facilitate the migration of these cells to the injured site, as observed with our histologic evidence.11,16 The VSELs are small cells and their small size is important for rapid mobilization and homing to the damaged tissue. It was shown that in experimental myocardial infarction in mice, there was rapid mobilization of VSELs from bone marrow to the peripheral blood.10,17,18 It also was reported that VSELs differentiate into epithelial and endothelial cells at the injured site,10 but the ability of VSELs to differentiate into neural cells remains to be investigated.

In this research, expression of mRNA of GFAP (astrocyte marker), Olig-1 (oligodendrocyte marker), β-111 tubulin, and nestin (neural cell markers) was increased at the injured site 7 weeks after injection of VSELs. These data are in accordance with the recent observations of Paczkowska and associates.17 They studied stroke patients and found an increase in circulating VSELs, and they evaluated the expression of mRNA for early neural stem cell markers; their results revealed an increase in mRNA expression of GFAP, nestin, Olig-1, and β-111 tubulin.17 We compared the lesion size of spinal cord tissue in the experimental and control groups, and the results showed that homing of VSELs in injured tissue significantly reduced the lesion size, indicating the VSELs may function to regenerate the injured tissue. Behavioral assessment after SCI revealed that VSELs promoted locomotor recovery after transplant into a rat model of SCI. The experimental group had significantly better locomotor recovery than the other groups at 7 weeks after VSEL transplant, which shows beneficial results of transplant of VSELs into the SCI site.

Based on these results, we conclude that VSELs may be a good source of stem cells for transplant into injured tissue of rat spinal cord for regeneration, because they have both embryonic and adult stem cell characteristics. However, further studies are required to determine whether these cells could be efficient in a clinical trial. 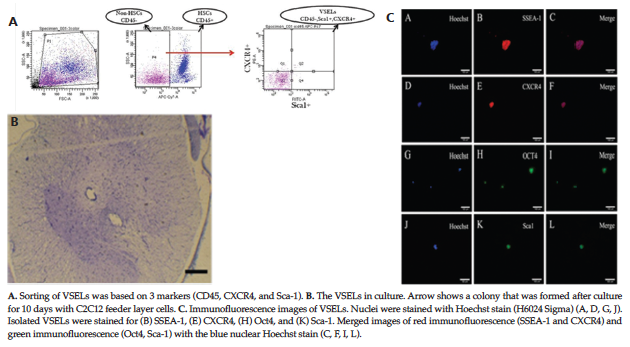 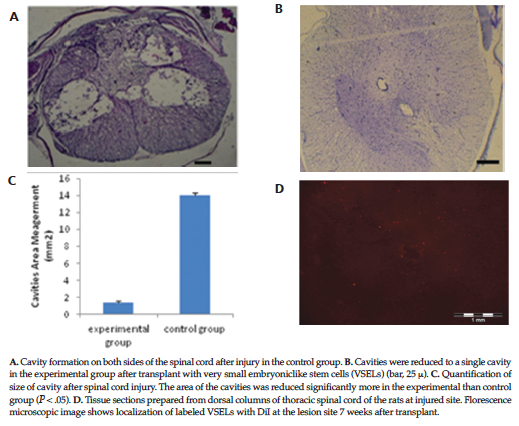 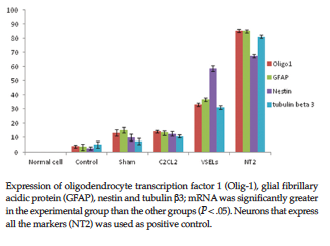 Figure 3. Expression of mRNA of Neural Markers in the Study Groups 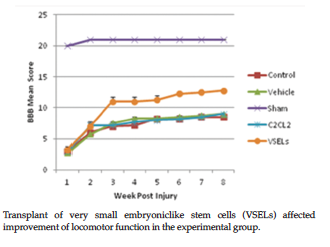 Figure 4. Basso, Beattie, and Bresnahan (BBB) Test Scores in All Groups During the 8 Weeks After Injury