Objectives: This study was conducted to evaluate the outcomes of single kidney transplant from pediatric donors in China younger than 5 years old after cardiac death.

Materials and Methods: We retrospectively reviewed single renal transplants from pediatric donors of cardiac death between January 2012 and June 2013 at the First Affiliated Hospital of Zhejiang University, China.

Results: Eleven recipients received single kidney transplant from 6 pediatric donors of cardiac death donors at our center (aged, < 5 years). The median donor age was 39 months (range, 17-56 mo). The median donor weight was 14.5 kg (range, 11-20 kg). While the median recipient age was 35 years (range, 12-55 y). The median recipient weight was 42.5 kg (range, 21-55 kg). The recipient serum creatinine level gradually decreased and the 1 year serum creatinine was 77.7 ± 17.6 μmol/L. Delayed graft function occur-red in 5recipients (45.5%), and all of them recovered within 1 month after transplant. No episodes of acute rejection occurred. No vascular thrombosis or stenosis after ureteroneocystostomy was seen. One patient had urine leakage on the eighth day after transplant, and was cured through a ureter reimplantation. The graft size increased significantly the first month after transplant compared with that recorded immediately after reperfusion (P = .011). The 1-year patient/graft survival was 100%.

Conclusions: Use of single kidney from pediatric donors after cardiac death (aged, < 5 y) is a safe and effective procedure and can greatly expand the donor pool.

It is a long time for those patients waiting, and available donors for a kidney transplant. Organ donation after cardiac death (DCD), formerly known as “nonheart beating donors” is advocated as an important way of closing the gap between organ supply and demand in China. The shortage of transplant organs led us to consider expanding the donor pool, including donation from pediatric donors younger than 5 years of age. We infrequently used a single kidney transplant from donors younger than 5 years of age in transplant centers, because of concerns over increased acute cellular rejection, delayed graft function, vascular, and urinary complications.1 Pediatric kidneys have traditionally been transplanted en bloc into adult recipients to maximize graft function, because a single kidney transplant maximizes the resources available because each donor produces 2 recipient grafts.2,3 The choice of single versus an en bloc kidney transplant from pediatric donors remains controversial. In this study, we describe our results with the transplant of a single kidney from DCD donors younger than 5 years of age.

This retrospective study of 11 single kidney transplants performed at our center between January 2012 and June 2013 from DCD donors younger than 5 years of age. Pediatric kidneys were transplanted individually into patients of low weight (≤ 55 kg), preferably female and primary transplant. We evaluated patient/graft survival, graft function, rejection episodes, delayed graft function (DGF), and surgical complications in these patients. Delayed graft function was defined as temporary dialysis initiated in the first week after transplant.

All donors were diagnosed with brain death, and their parents signed the informed consent for donation of their child’s organ. The intensivists were responsible for withdrawing life-support measures and declaring clinical death of each donor. Every donor was in accord with M-III status. After 5 minutes of “no touch time” and finally declaring cardiac death, the organ-donation process was performed by the surgeons from local organ procurement organizations. This retrospective study was approved by our local institutional ethics committee, and was carried out in accordance with the Declaration of Helsinki.

Immunosuppressive regimen
All patients received rabbit antihuman thymocyte immunoglobulin induction therapy and continually administered triple immunosuppressive therapy, consisting of corticosteroids, mycophenolate mofetil, and tacrolimus. Antihuman thymocyte immuno-globulin was initiated before transplant, and continued for the next 3 to 5 days. Methylprednisolone was administered at 12 mg/kg on the day of transplant, and then reduced to 10 mg/kg over the next 2 days, and 5 mg/kg on the day 3 after surgery. Oral prednisone was administered 80 mg/day on the fourth day after surgery, and tapered to a maintenance dosage of 10 mg/day. Oral tacrolimus was initiated 0.1 mg/kg/day when the serum creatinine level decreased beneath 300 μmol/L. Dosage was adjusted to a trough level of 8 to 10 ng/mL for first 1 to 3 months, and then the target was reduced to a trough level of 6 to 8 ng/mL. Mycophenolate mofetil was initiated from the first day of surgery at a dosage of 2000 mg/day, then reduced to 1500 mg/day after 1 week, and reduced to maintenance dosage of 1000 mg/day after 2 weeks.

Posttransplant follow-up
All patients were followed-up weekly for the first 3 months after discharge from the hospital, every 2 weeks for the next 3 months, and at 3 monthly intervals thereafter. On every visit, we routinely monitored the complete blood counts, renal and liver function tests, and drug plasma concentrations. Glomerular filtration rate was estimated using the abbreviated Modification of Diet in Renal Disease formula. The size (including length, width, and thickness) of the graft kidney was measured manually immediately after reperfusion, and again using color Doppler ultrasonography 1 week after surgery, and then again at 1, 6, 12 months after the transplant. We estimated kidney volumes using the prolate ellipsoid method: volume (cc) = length (cm) × width (cm) × thickness (cm) × (π/6).4 Mean values were compared by paired sample t tests (P < .05).

Of the 129 DCD kidney transplants performed at our center between January 2012 and June 2013, eleven recipients (8.53%) used single renal grafts from 6 pediatric donors (younger than 5 years of age). The median time of donor from the withdrawal of life-support measures to declaration of clinical death was 17.5 minutes (range, 6-47 min).The median donor age was 39 months (range, 17-56 mo), and the median donor weight was 14.5 kg (range, 11-20 kg). The median donor terminal creatinine level was 48 μmol/L.

The follow-up duration was 18 months (range, 12.8-26.9 mo). The recipient serum creatinine level gradually decreased (Figure 1), and the estimated glomerular filtration rate increased stably and increased slightly thereafter. The 1-year serum creatinine was 77.7 ± 17.6 μmol/L. Delayed graft function occurred in 5 recipients (45.5%), and all of them recovered within 1 month after transplant. No episodes of acute rejection occurred. No vascular thrombosis or stenosis after ureteroneocystostomy was seen. One patient had urine leakage on the eighth day after transplant and was cured through a ureter reimplantation. The 1-year patient/graft survival was 100%, and the graft function remained stable to the latest reported follow-up.

Color Doppler ultrasonography showed that the graft size increased significantly the first month after transplant compared with that recorded immediately after reperfusion (estimated kidney volume 109.1 ± 33.6 vs 59.4 ± 15.0 cc; P = .011) (Figure 2). During the follow-up, no renal graft artery stenosis was observed. The renal artery blood flow velocity was 68 to 157 cm/second 1 year after the operation.

In recent years, kidney transplant from donors of cardiac death has developed gradually in China. However, the gap between supply and demand is increasing. Many centers made efforts to expand the donor pool, including using marginal older donors and donations from pediatric donors.

As the concerns about the surgical complications of vascular stenosis and leakage after uretero-neocystostomy, many centers are reluctant to undertake the single transplant of pediatric donors, especially those younger than 5 years of age. Qing Yuan and associates5 reported excellent outcomes with the transplant of single kidneys from pediatric DCD donors (median donor age, 74 mo). In our study, the donor age was much younger (median donor age, 39 mo) and the youngest was 17 months. Despite higher risk of delayed graft function, the outcomes of recipients at 1-year patient/graft survivals and graft functions also were excellent.

Brenner and associates6 established a hyper-filtration hypothesis that a lack of nephron mass may lead to renal hyperfiltration injury with an increased incidence of focal segmental glomerulosclerosis. El-Sabrout and associates2 have reported that a low donor/recipient body weight ratio may contribute to inferior long-term renal allograft survival, possibly owing to hyperfiltration. Considering the issue, we choose those low weight, preferably female recipients, to relieve the donor/recipient mismatch. During follow-up, we found that kidneys grew rapidly in the first month after transplant, and then graft function improved gradually. Different from the older donor, the compensative capacity of the pediatric donor kidney is strong. A single kidney transplant from small donors could expand the donor pool without compromising recipient outcomes.

In Yuan’s study,5 one patient developed renal artery anastomotic stricture, presenting as increased blood pressure and serum creatinine. As they reported, the donor’s renal artery and recipient’s internal iliac artery were anastomosed end-to-end. Considering the growth of small kidneys, we chose a different anastomotic technique. In our study, the donor’s renal artery, with a wide aortic carrel patch and the recipient’s external iliac artery, were anastomosed end-to-side with interrupted sutures. No renal graft artery stenosis was found by color Doppler ultrasonography during follow-up in our study.

The limitation of this study is that it is a retrospective and single-center study with a short follow-up. The sample size of study would be larger in future. In conclusion, although higher risk of delayed graft function, single kidney transplant from pediatric donors younger than 5 years after cardiac death could expand the donor pool with acceptable outcomes. The better body size match and surgical technique should be considered. 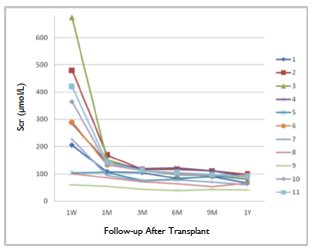 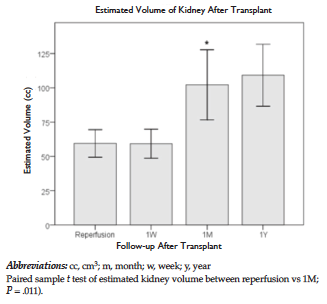 Figure 2. Estimated Volume of Transplant Kidney (cc) Immediately After Reperfusion and During Follow-Up After Surgery