Objectives: Iminoral is the generic microemulsion of cyclosporine. We performed a randomized double-blind multicenter trial to evaluate its efficacy and safety compared with the innovator medication Neoral for preventing acute rejection episodes in adult patients during the first year after renal transplant.

Materials and Methods: We used 221 de novo renal transplant recipients from 6 transplant centers in Iran enrolled between April 2008, and January 2010. They were randomized to receive either Iminoral or Neoral as the calcineurin inhibitor component of the immunosuppressive regimen in addition to mycophenolate mofetil and oral corticosteroids. They were followed-up for 1 year. The primary endpoint was the rate of acute allograft rejection. Secondary endpoints consisted of 1-year graft survival rates, daily dosages of cyclosporine, trough and C2 cyclosporine blood level, serum creatinine levels, patient death rates, discontinuing the study drug, tolerability, and adverse events.

Results: The risk of acute rejection episode during the first month after transplant was 9% for Iminoral and 10% for Neoral; these declined to 4% and 2% during next 11 months. One-year graft survival rate was 0.86 for both groups. Renal function stabilized during the first month. Declination of the creatinine levels was similar between the 2 groups and reached a stable value of 114.9 μmol/L five months after the transplant. The frequency of clinical complications was similar between the groups.

Conclusions: Iminoral is safe and effective when used in de novo kidney transplant patients as an immunosuppressive medication.

Iminoral is the first generic microemulsion-based formulation of cyclosporine, developed by Zahravi Pharmaceutical Company in Iran, and it has been approved by the appropriate regulatory authorities. It has been available since 2003. Its bioequivalence to the innovator drug Neoral in healthy volunteers has been shown previously. The bioavailability parameters (Cmax, Tmax, t1/2, AUC0-12, and AUC0-∞) of both formulations are similar and within FDA specified limits.8,9 Furthermore, Iminoral possesses equal efficacy and safety when compared with Neoral in stable adult renal transplant recipients who have been switched from Neoral to Iminoral.9 At present, Iminoral covers more than 90% of Iranian medicine market of cyclosporine. It is 50% less expensive than Neoral. This offers a substantial cost-savings to transplant patients and to the health care system.

However, no study has been performed yet to verify the efficacy and safety of Iminoral in de novo renal transplant recipients. This study was conducted to evaluate the clinical outcomes of Iminoral consumption for 1 year after transplant.

Design and enrollment
This clinical trial is registered at http://clinicaltrial/ ct2/show/record/ NCT00656695. The protocol was approved by the Review Board and ethics committee of Tehran University of Medical Sciences (#S68463/February 2008), and it conforms to the 1975 Declaration of Helsinki. Written, informed consent was obtained from all patients after educating them about the nature and details of the study.

Treatment plan
To preserve the double-blind condition, Iminoral and Neoral soft gelatin capsules (in 2 dosage forms: 100 mg and 25 mg) were blister packed with identical appearance, distinct batch numbers, and expiration date. Each blister was labeled according to the balanced block randomization method prepared by each center, separately. Patients were randomly assigned to receive either Iminoral or Neoral, using a computer-generated list of random numbers. Neither the prescriber nor the patient could recognize the brand of cyclosporine. Batch numbers were kept in confidence in a warehouse of the Zahravi Pharmaceutical Company until the end of study. After the statistical analyses of data, medications were decoded.

Currently in Iran, human leukocyte antigen matching for living-unrelated kidney donors is not performed, and just white blood cell cross-match is mandatory.10,11 All patients were ABO compatible and received induction therapy with polyclonal antibodies, and antihuman thymocyte globulin (ATG) if they received the allograft from brain-dead donors, or if their serum creatinine levels decreased more than 50% after the first postoperative day. Antihuman thymocyte globulin was given according to manufacturer’s recommendations. The treatment protocol was a triple immunosuppressive regimen that included cyclosporine, mycophenolate mofetil, and corticosteroids. Diltiazem was in the maintenance protocol, routinely, to make the dosage of cyclosporine less expensive. The dosage of cyclosporine was 6 to 8 mg/kg twice a day, which was tapered to 4 mg/kg/d by 2 weeks, according to the whole blood cyclosporine level, and the patient’s clinical assessment. The first initial dosage was administered 12 hours before kidney transplant. In those with ATG, the dosage starts with 3 mg/kg/d, and after stopping the ATG, the dosage increased to 4 to 5 mg/kg/d.

Acute rejection was managed with intravenous methylprednisolone 500 mg pulse therapy for 3 days. If a satisfactory response was not achieved, ATG was administered according to the manufacturer's recommendations. Acute rejection episodes were diagnosed by the presence of the following: increase in the serum creatinine level to 30% over baseline, substantial medical imaging results (eg, ultrasound and isotope scanning), exclusion of other causes of renal function impairment (eg, drug toxicity, infection, homodynamic instability, obstruction, inflammation, or vascular disorder), and biopsy-proven episodes. A kidney allograft biopsy was performed only if acute rejection criteria mentioned above were not fulfilled, or if the antirejection therapy did not improve the renal function. Diltiazem was the first choice in hypertensive patients, and other medications were prescribed according to the patient’s history and physician’s decision.

Monitoring of efficacy and safety
All patients were followed for 1 year after the transplant. The primary endpoint of the study was defined as the rate of graft rejection occurrence, during the first year after transplant. Secondary endpoints consisted of graft loss, increase in daily dosages of cyclosporine, decrease in trough and C2 cyclosporine blood levels, increase of serum creatinine levels, death rate, discontinuation of the study drug, tolerability, and adverse events. Efficacy and safety were monitored by visiting the patients daily for first 2 weeks, and then weekly until the eighth week, and monthly thereafter. Cyclosporine blood levels were measured during the first, second, and eighth weeks, and during the third, sixth, and 12th months after transplant, and whenever it was necessary according to the physician's decision.

Statistical analyses
Categorical data are expressed as frequency and percentage. Quantitative data are summarized as means ± standard deviation; otherwise specified. One patient in the Neoral group, and 2 patients in the Iminoral group did not take their allocated drugs until the end of study; however, analyses of the data were performed based on the intent-to-treat population. To compare the distribution of categorical variables between the study groups, the chi-square and the Fisher exact tests were used (when appropriate). The unpaired t test was used to compare distribution of continuous variables. We calculated the graft survival rate by measuring the time between the transplant and acute rejection, or the last contact (if no rejection occurred). To compare survival rates, we performed Kaplan-Meyer estimates and log-rank test. P values less than .05 were considered statistically significant. For those variables that were measured repeatedly, a P value less than .01 was considered statistically significant.

Adverse events
The most frequently seen adverse events were hyperglycemia, hypertension, infection, abdominal discomfort, nausea, and tremor (Table 5) with a similar distribution in each group. No adverse events led to discontinuation of the study. Transplant surgery complications occurred 1 day after surgery in 2 patients in the Neoral group, and in 1 patient in the Iminoral group. Tacrolimus had to be administered to these patients. One case of graft loss occurred in Neoral group the day after transplant.

Readmission
Hospital readmission occurred in 71 patients (32.1%), with a similar distribution in each group (37 in the Neoral group [16.7%], and 34 in the Iminoral group [15.4%]). The causes included kidney dysfunction, abdominal pain, flulike symptoms, uncontrolled hypertension, acne, urinary infection, hyper-glycemia, and tremor (Table 6).

The results of the current randomized double-blind multicenter trial study revealed that de novo use of Iminoral from the time of the transplant results in good graft and patient survival rates. One-year graft survival rate without rejection was 0.86 in the Iminoral group, which is similar to the Neoral group. The risk of an acute rejection episode in the first month after transplant was 9% in the Iminoral group, declining to 4% during the following 11 months. These values are similar to the data obtained for the Neoral group with the rates of 10% and 2%. These results indicate that the efficacy of Neoral is comparable to Iminoral when used in renal transplant patients.

Renal function stabilized between months 1 and 12 in both groups. The trend of decline in the serum creatinine level was similar between the groups during the study, and the level reached a stable value of 114.9 μmol/L at month 5 after transplant.

Regarding the adverse effects, the significant adverse effect was hypertension. Some may argue that diltiazem, which increase cyclosporine levels, may be involved in the increase in the rate of hypertension. However, the main objective of this study was to compare the 2 brands of drugs, and it seems that administering diltiazem, which interferes with cyclosporine metabolism, does not have any negative effect on the results.

In conclusion, to our knowledge, this is the first study to be performed with a generic cyclosporine formulation on de novo kidney transplant patients using a double-blind design and a considerable sample size. The high rate of 1-year graft survival, we found, and the low risk of acute rejection and good safety profile associated with Iminoral, suggests that this generic formulation can be substituted for innovator medication Neoral in immunosuppressive drug regimens for renal transplant patients. 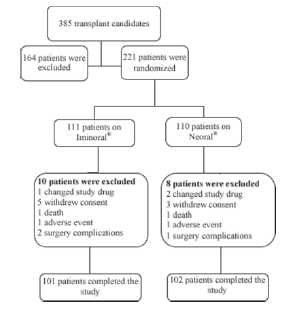 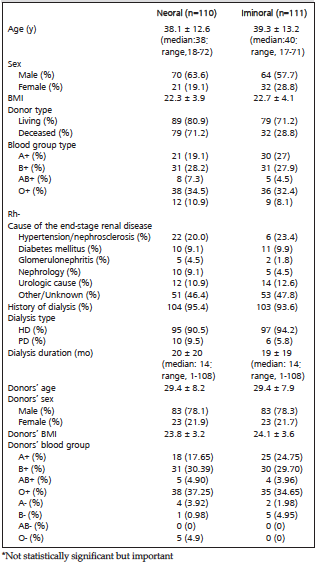 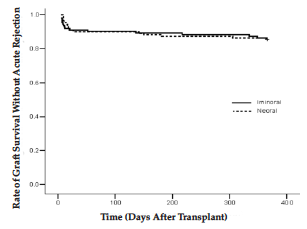 Figure 2. Kaplan-Meier Curve Estimation of Probability of an Occurrence of Acute Rejection 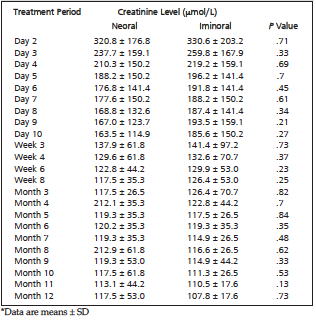 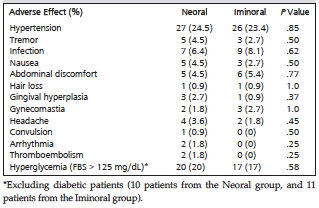