Objectives: We assessed the safety and efficacy of right versus left laparoscopic living-donor nephrectomy. Few clinical-controlled studies have compared the right and left side, and most trials have a small sample number and varied results. A meta-analysis of published trials was performed to determine the effects of the 2 different approaches.

Conclusions: Right and left laparoscopic living-donor nephrectomy were similar in the effect of surgery and postoperative graft function. When there are no differences in bilateral renal function, surgeons can transplant the right or left kidney. However, the longer renal vein of the left kidney could decrease operative difficulty, and we recommend using the left kidney in clinical practice.

Study inclusion
Medline (PubMed), Embase, Ovid, Cochrane, and Chinese Biomedical Literature databases were searched for studies performed between 2000 and 2014 that compared right and left laparoscopic living-donor nephrectomy. The following medical subject headings were used, alone or in combination: laparoscopic, nephrectomy, renal transplant, comparative study, live donor, left, and right. The function of related articles was applied to enlarge the search. The references of each included study were reviewed, and the last study date for the search was May 2013. To ensure that any relevant studies were not missed, many laparoscopic surgery scholars were consulted. This analysis only included comparative clinical full-text studies, and the final articles included in the study were agreed upon by all authors of this study.

Data extraction
The following data were independently extracted from each study by 2 coauthors (PZ and KW): year of publication, first author, characteristics of targeted population, research design, interventions, and outcomes of interest. To avoid missing related study data, the 2 coauthors attempted to contact study authors when information was lacking or unclear. Conflicts between investigators about the outcomes of interest were reviewed and agreements were reached on the final interpretation of the data.

Statistical analyses
This meta-analysis followed the Quality of Reporting of Meta-Analyses guidelines and recommendations of the Cochrane Collaboration14,15 and was performed with statistical software (Review Manager, Version 5.0, Clicktime, San Francisco, CA, USA) (Stat Manager, V4.1, Stata Corp, College Station, TX, USA). The weighted mean difference was used to analyze continuous variables, and dichotomous variables were analyzed by determination of odds ratio (OR).16 There were 15 studies identified within 95% confidence interval (CI). The OR represented the occurrence odds of an event in the right compared with left group, and the numerical differences between the 2 groups were summarized by weighted mean difference for continuous variables. When P < .05 and 95% CI did not include the value 1, the OR and weighted mean difference were considered statistically significant. When continuous data were presented as range and mean, we used statistical algorithms and bootstrap resampling techniques to calculate and verify the standard deviations (SD).

To evaluate the quality of the studies, we used the Newcastle-Ottawa Scale, with minimal modifications matched for the requirements of the present study (Table 1).17 The quality of the studies was assessed according to the following criteria: patient selection, comparability between the 2 groups, and outcome assessment. Except for the only randomized controlled trial, each study was assessed by scoring from 0 to 9 stars. The maximum number of stars in the selection, comparability, and outcome categories was 3, 4, and 2. The studies that had ≥ 5 stars and the only randomized controlled trial were believed to be of high quality.

Eligible studies
The identified studies selected for this analysis successfully matched the selection criteria and had been published between 2000 and 2014. The search strategy generated 105 relevant clinical studies, including 19 full text articles that were further investigated. Of these, 4 studies were excluded: the data of 2 studies were incomplete, containing only averages; 1 study did not contain a control group; and the data of 1 study were unclear. Therefore, 15 studies were identified for inclusion, including 1 randomized controlled trial 18 and 14 nonrandomized comparative studies. A flow diagram outlined the process of study selection (Figure 1).

The studies by Posselt and coworkers and Dols and associates were outliers in operative time; I2 decreased and P > .10 (I2 = 46%; P = .05) after excluding these 2 studies from the operative time model. Galbraith plot analysis showed that the studies by Dols and associates and Maartense and coworkers were outliers in warm ischemia time; I2 decreased to < original value and P > original value after excluding these 2 studies (I2 = 54%; P = .02). In the model for postoperative recipient serum creatinine at 1 year, the number of studies was insufficient and we could not identify the outliers that might have contributed to heterogeneity.

Publication bias
The funnel plots were calculated based on operative time, warm ischemia time, and postoperative recipient serum creatinine at 1 year (Figure 7). All trials were within 95% CI limits, and no evidence of publication bias was noted. The Egger test was performed to present statistical evidence about the symmetry of funnel plots. There was no evidence of publication bias in terms of operative time (P = .84), warm ischemia time (P = .406), or postoperative recipient serum creatinine at 1 year (P = .843).

Many studies suggested that laparoscopic nephrec-tomy in living-donor transplant was a safe alternative to the open technique.3,19 More medical centers performed the laparoscopic technique. But urologists could not decide which side was better, only from their experience and intuition. This systematic analysis was essential. Our study was a relevant meta-analysis of all the available literature comparing the left and right sides in laparoscopic living-donor nephrectomy.

For urologists, early recovery of graft function is most concerning.24 Our study showed no differences in the warm ischemia time. A related survey by Abreu and coworkers25 reported that warm ischemia time plays an important role in delayed graft function. In our analysis, the rate of delayed graft function was similar in the right and left groups (right, 3.2%; left, 4.1%). Studies comparing left versus right laparoscopic nephrectomy demonstrated no difference in terms of donor hospital stay. In the analysis of follow-up data, no significant differences in postoperative measures of graft function between the left and right groups were evident such as postoperative recipient serum creatinine at 7 days, 1 month, or 1 year. Some studies showed that serum creatinine was useful in detecting minor degrees of deterioration of renal function, and glomerular filtration rate may be estimated accurately based on serum creatinine according to the Kidney Disease Improving Global Outcomes and National Kidney Foundation/Kidney Disease Outcomes Quality Initiative guidelines.26,27 Nevertheless, as a more intuitive indicator, the rate of 1-year graft loss should be evaluated. In our meta-analysis, the rates of 1-year graft loss on the right and left sides were 2.6% and 2%, and we found no statistical significance in the comparison of the rate of 1-year graft loss.

Heterogeneity analysis of the right and left laparoscopic living-donor nephrectomy suggested significant heterogeneity in operative time, warm ischemia time, and postoperative recipient serum creatinine at 1 year. To explore the sources of heterogeneity, we performed subgroup analyses according to the specific operative method. In hand-assisted nephrectomy, the heterogeneity of 3 models decreased significantly, but in the other 2 subgroups, heterogeneity did not decrease. Therefore, the specific operative method was not the main source of heterogeneity. To further investigate the hetero-geneity, we performed Galbraith plot analysis to identify the outliers that might have contributed to the heterogeneity. Our results showed that the studies of Posselt and associates and Dols and coworkers were outliers in operative time. All I2 values decreased and P was > .10 after excluding these studies in the operative time model. Galbraith plot analysis showed that the studies by Dols and associates and Maartense and coworkers were outliers in warm ischemia time. The I2 value decreased < original value and P was > original value after excluding the studies of Dols and coworkers and Maartense and associates. In the model for postoperative recipient serum creatinine at 1 year, because the number of studies included was not sufficient, we could not identify the outliers that might have contributed to the heterogeneity. The results indicated that these studies might be the major source of heterogeneity for operative time and warm ischemia time.
Many studies were affected by factors such as patient preference and could not randomly assign the operative approach. Therefore, nonrandomized controlled trials accounted for a high proportion in our analysis, which is a possible criticism that the meta-analysis may reinforce inherent systematic biases of the studies, cause spurious statistical stability, and discourage further research. However, Deeks and coworkers28 have assessed nonrandomized controlled trials by using resampling techniques; they showed that results of randomized and nonrandomized studies may differ, but similarities and differences may be explained by other confounding factors. Therefore, we believe that meta-analysis of nonran-domized studies may be useful when randomized controlled trials are not available. Nevertheless, further prospective randomized trials are required for a more comprehensive comparison of the 2 sides.

In several studies, ranges but not standard deviations were recorded. Some workers doubt that this may lead to publication bias. However, a recent study by Hozo and coworkers29 provided a rigorous scientific method to estimate the standard deviation. Using these formulas, they suggested that we can “use clinical trials even when not all of the information is available and/or reported.” In addition, in our meta-analysis, studies that recorded ranges rather than the standard deviation only accounted for a small proportion. The results of Egger test did not suggest any evidence of publication bias in the overall outcomes.

In some studies, there was slight variability in terms of definitions, inclusion criteria, and mea-surement of outcomes. This variability might introduce bias into the current study. However, consensus in definitions, inclusion criteria, and measurement of outcomes was reached between reviewers by consulting relevant experts and counterparts. The analysis results showed little heterogeneity for most of the continuous outcomes and all dichotomous outcomes examined in this analysis.

Limitations of the present study included the differences in the number of patients between the 2 groups. Many urologists prefer the left than right side due to the bias of the less demanding operation from the longer renal vein, and they conclude by intuition that the less demanding operation may improve the effect of the operation. Therefore, the number of cases was less in the right than left group. More trials of the right procedure are required for a more comprehensive comparison of the 2 sides. 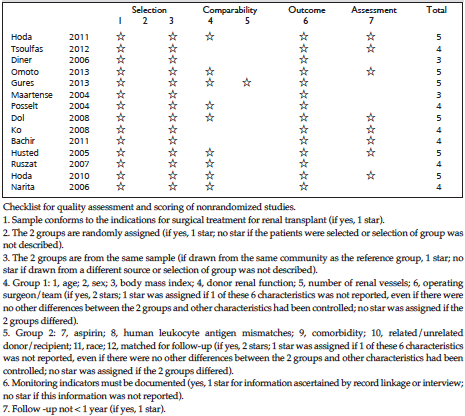 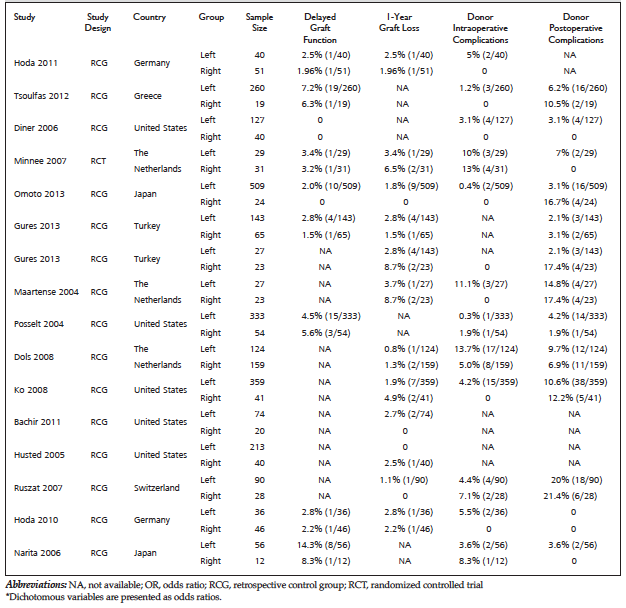 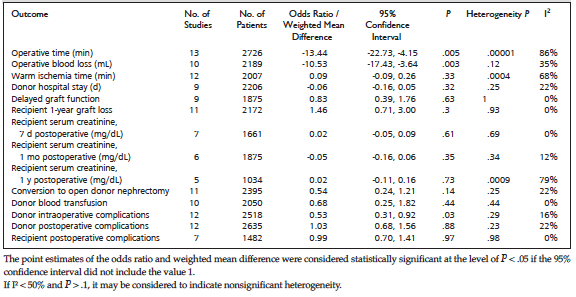 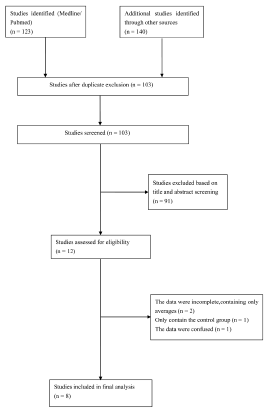 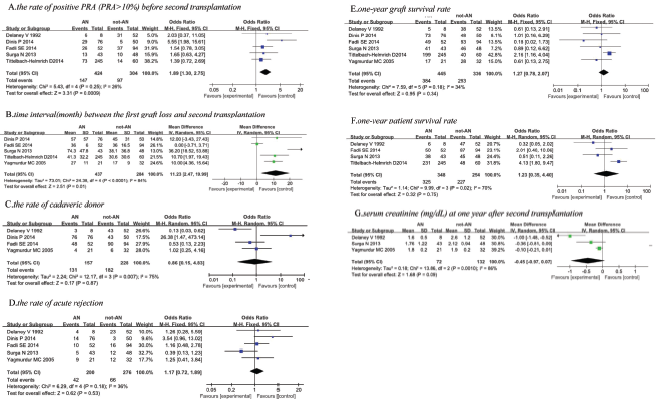 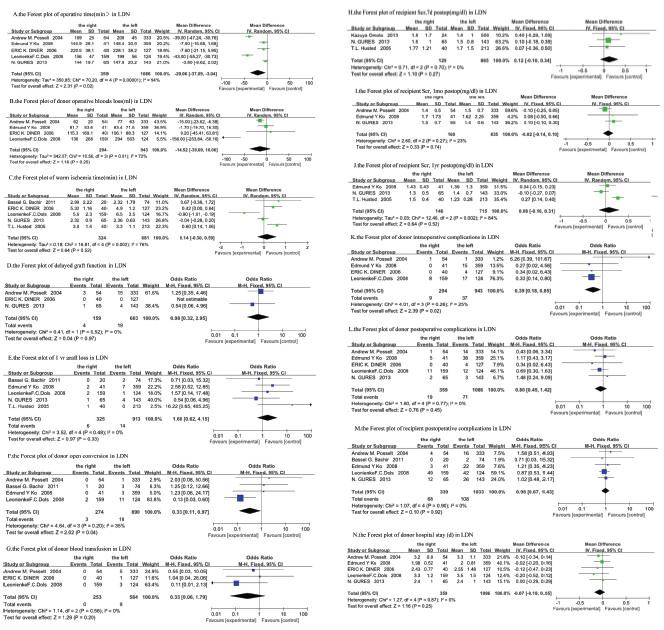 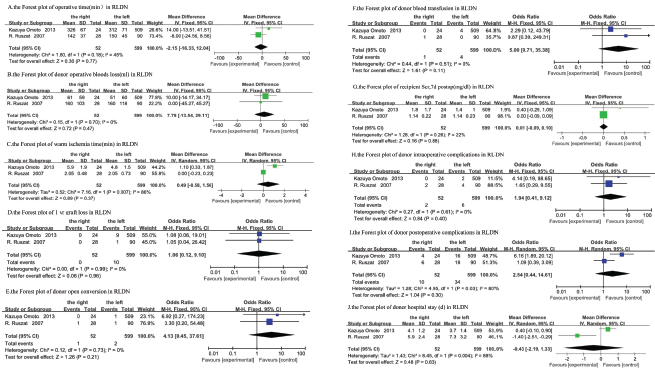 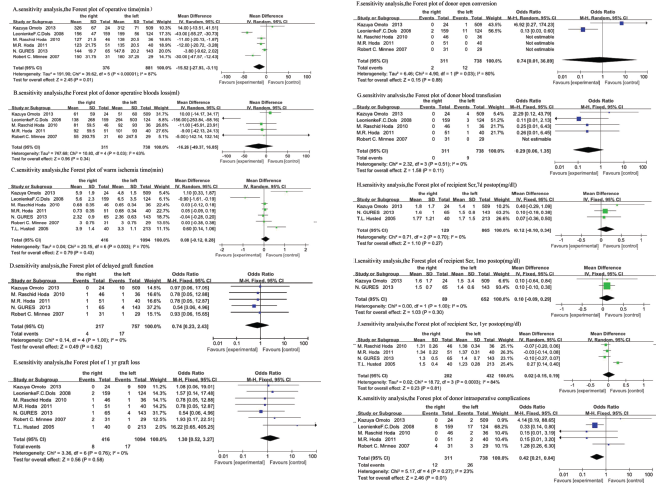 Figure 7. Funnel Plots Based on Outcomes