Objectives: We report a case of central nervous system coinfection with 2 types of opportunistic organisms—Aspergillus and Mycobacterium tuberculosis—in a 33-year-old woman who underwent a renal transplant.

Materials and Methods: She developed a high-grade fever and right-sided weakness 1 month after the transplant while on mycophenolate mofetil, prednisolone, and cyclosporine.

Conclusions: Broad-spectrum antibiotics, antituberculous agents, and amphotericin were started. Unfortunately, the woman’s condition deteriorated, and she died 2 weeks after admission to the hospital.

Meningoencephalitis is an infectious complication of transplant that may be caused by opportunistic organisms, such as Aspergillus1 and mycobacterium.2 The rate of mycobacterial infections after renal transplant is more than 100 times greater than that of the general population.3 Central nervous system tuberculosis can present as chronic meningitis, meningoencephalitis, brain abscess, or tuberculoma. Cerebral tuberculoma are frequently localized in the cerebellum, basal ganglia, and both hemispheres.4

A 33-year-old woman was admitted to our hospital complaining of high-grade fever and right-sided weakness. She recently received a renal transplant, so she was on mycophenolate mofetil (1000 mg, twice a day, orally), prednisolone (5 mg per day), and cyclosporine (175 mg/d) for more than 9 months. She did not have any history of contact with a patient with tuberculosis before or after the transplant, and purified protein derivative test results, which were performed before transplant, were negative.

On admission, the results of her vital signs were normal, and the results of a neurologic examination revealed weakness in the right upper and lower extremities with motor power 4/5, but she developed a fever during her course in the hospital (oral temperature, 39°C).

Laboratory investigations showed normal white blood cell (6800) and platelet (160 000) counts and a decrease in hemoglobin concentration (8.7 mg/dL). Her C-reactive protein level was 192, and the results of a chest radiograph and paranasal sinus computed tomography scan were normal. A cranial magnetic resonance image showed multiple lesions with peripheral ring enhancement (Figures 1A and B).

An analysis of her first cerebrospinal fluid was pressure, 18 cm; protein, 105 mg/dL; sugar, 48 mg/dL; white blood cell count, 90; (polymorphonuclear leukocytes, 84% and lymphocytes, 16%). Vancomycin and ceftriaxone were prescribed. Lumbar puncture was repeated after 4 days owing to clinical deterioration, which revealed the following: White blood cell count, 80 (polymorphonuclear leukocytes, 44% and lymphocyte, 56%); protein, 270 mg/dL; and sugar, 45 mg/dL. Initial laboratory evaluation for bacterial meningitis (such as cerebrospinal fluid and bacterial culture) was needed according to the clinical presentation. Bacterial cultures of her cerebrospinal fluid and cytomegalovirus polymerase chain reaction were negative. Mycobacterial and fungal cultures of cerebrospinal fluid were not performed, but a polymerase chain reaction assay for both organisms was positive.

The results of a transesophageal echocardiography were normal, and abdominal sonography revealed mild splenomegaly and a large hypoechoic lesion, just near the aorta, at the pancreatic level in favor of lymphadenopathy.

A 4-drug antituberculin regimen (rifampin, isoniazid, ethambutol, pyrazinamide) for coverage of Aspergillus was prescribed, which resulted in partial improvement of the patient. But after 1 week, she developed a decreased level of consciousness. A new computed tomography scan of her brain showed hydrocephalus and thus, a ventriculostomy tube was inserted. Amphotericin was replaced by voriconazole. Despite vigorous treatment, her clinical condition deteriorated, and she died 2 weeks after admission.

Cerebral tuberculosis is often insidious in the transplant patient; the diagnosis easily may be missed.3 Standard diagnostic methods for tuberculosis include microbiologic culture of Mycobacterium tuberculosis, and/or demonstrating acid-fast bacilli or caseating granuloma in histologic samples.8 Nucleic-acid–amplification methods (eg, polymerase chain reaction) have improved bacteriologic assays, but their diagnostic role is unclear owing to a few cases and inadequate microbiologic diagnostic comparison.9 In a meta-analysis review, the sensitivity and specificity of commercial nucleic-acid–amplification assays for diagnosing tuberculosis were 56% (95% CI: 46-66) and 98% (95% CI: 97-99).10

We used a real-time polymerase chain reaction for detecting Mycobacterium tuberculosis nucleic acid. The estimated sensitivity and specificity of this method of diagnosing central nervous system tuberculosis are 77.1% and 100%.6

There are limited data that show that imaging can be different between central nervous system tuberculosis and other cerebral disorders. Kumar and colleagues compared the computed tomography scans of 94 children with tuberculosis with those of 52 children with pyogenic meningitis. Basal enhancement, hydrocephalus, tuberculoma, and infarction were more-common in those with tuberculosis, whereas subdural collections were more-common in those with pyogenic meningitis. These authors suggested that basal meningeal enhancement, tuberculoma, or both, were 89% sensitive and 100% specific for diagnosing tuberculosis.11

Chemotherapy of tuberculous meningitis follow the model of a short course of chemotherapy for pulmonary tuberculosis, which has 2 stages: an “intensive phase” (with treatment using 4 drugs), followed by a “continuation phase” (which consists of treatment with 2 drugs for a prolonged time).12 The central nervous system is involved in 80% of patients with disseminated invasive aspergillosis.5 Central nervous system aspergillosis may present with altered mental status, seizures, and focal motor neurologic deficits.1 Vascular invasion of Aspergillus hyphae results in cerebral infarction that is usually hemorrhagic. When the fungus erodes through the vascular bed, the sterile infarct is converted to a septic infarct that is usually associated with cerebritis and abscess formation. This inflammatory process may extend into the subarachnoid space with meningitis/meningoencephalitis or mycotic aneurysm formation.5 The concomitant presence of other fungal, viral, or bacterial infections may preclude diagnosing central nervous system aspergillosis in organ transplant patients.13

In central nervous system aspergillosis, fungal cultures of cerebrospinal fluid often remain negative. Identifying galactomannan in a serum sample can be a useful screening tool for diagnosing invasive aspergillosis. The sensitivity and specificity of this test in immunocompromised patients has been reported as 90% and 93% - 99%, but it is decreased by antifungal therapy.14 Several polymerase chain reaction methods have been used for detecting Aspergillus spp. in blood and bronchoalveolar lavage fluid samples, but experience with Aspergillus polymerase chain reaction in cerebrospinal fluid samples is limited.15

However, Millon and associates reported a false-positive case for both galactomannan antigenemia and Aspergillus polymerase chain reaction owing to a nutritional supplement intake in a bone-marrow–transplant recipient with digestive graft-versus-host disease.16

Five patterns of computed tomography abnormality have been described in the central nervous system of those with aspergillosis including brain abscess (43%), hemorrhagic infarction (12%), parenchymal hemorrhage (12%), diffuse necrotic encephalitis (6%), and mixed pattern (22%).

For decades, amphotericin B deoxycholate has used for invasive aspergillosis, although responses are less than optimal (< 40%) in severely immune deficient patients.19 Herbrecht and associates showed that in invasive aspergillosis, initial therapy with voriconazole led to better responses and improved survival, and fewer adverse effects compared with the initial therapy with amphotericin B.20 We present the current case for the rare occurrence of concomitant infection by 2 opportunistic organisms, aspergillum and Mycobacterium tuberculosis, which has occurred owing to a deficient immune status. 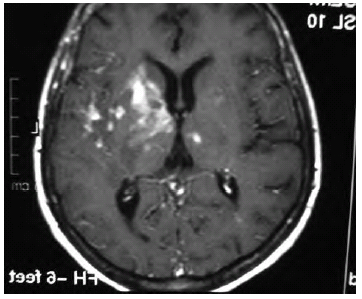 Figure 1a. Axial view of the brain magnetic resonance image of a patient with central nervous system aspergillosis and tuberculosis. 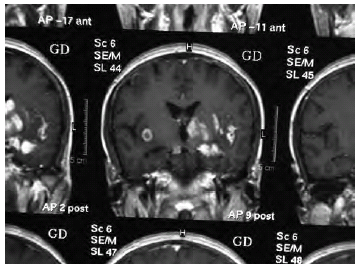 Figure 1b. Coronal view of the brain magnetic resonance image of a patient with central nervous system aspergillosis and tuberculosis.