Multiple complications in liver transplant have been described in the literature. However, appendicitis and diaphragmatic hernia have rarely been reported after solid-organ transplant. The clinical presentation of appendicitis is similar to that of nontransplant patients, but complications are more frequent, because the majority of the patients did not have leukocytosis. Diaphragmatic hernia can present with a variety of atypical clinical symptoms.

In this report, 1 patient who developed a diaphragmatic hernia and appendicitis after liver transplant is presented. A 2-year-old boy with end-stage liver cirrhosis owing to progressive familial intrahepatic cholestasis type-2 received a living-donor liver transplant. The posttransplant course was complicated. The diagnosis of diaphragmatic hernia was confirmed by thoracoabdominal computed tomography, and we decided to proceed with surgical repair. The patient had evidence of perforation, and the appendix was removed. After repositioning the intestine in the abdomen, a chest tube was placed, and the defect repaired with interrupted polypropylene sutures. The patient recovered after surgery without untoward sequelae.

A 2-year-old boy with end-stage liver cirrhosis owing to progressive familial intrahepatic cholestasis type-2 received a living-donor liver transplant at our institution in June 2004, using a left lateral segment graft from his uncle. Anthropomorphic data at the time of the transplant was 76 cm in height and 13 kg in weight. These were in the normal range of development for children of the same age. The Table shows the details of the patient and gives relevant information regarding the transplant operation and perioperative care. The posttransplant course was complex; his course was complicated by hepatic artery stenosis at the anastomotic site and a biliary leak from the cut surface of the liver, which responded to percutaneous transluminal angioplasty and percutaneous drainage. Ganciclovir therapy was given because of cytomegalovirus hepatitis in the first postoperative month. He was discharged home 97 days after the operation.

One year after transplant, episodes of acute rejection were diagnosed by clinical findings and transhepatic biopsy that were responsive to pulse steroid therapy. Nearly 1 year after transplant, the patient was admitted with a 4-day history of fever, cough without respiratory distress, and abdominal pain with vomiting. On physical examination, there were diminished breath sounds at the right base and axillary temperature of 38ºC. Laboratory investigation revealed a normal full-blood count and blood biochemistry. Empiric antibiotic therapy was started. Initial chest radiographs revealed marked elevation of the right hemidiaphragm prompting a diagnosis of right-sided diaphragmatic eventration. Diaphragmatic paralysis was suspected. Chest and abdominal computed tomography scans were done to exclude other diseases, which revealed a right-sided diaphragmatic eventration. Evidence of herniation of the transverse colon and colonic mesentery was not observed in the right hemithorax. The right hemidiaphragm was exposed through a right posterolateral thoracotomy incision.

It was thin in the central portion and thicker at the periphery. The plication at the intact diaphragm was fixed with nonabsorbable U-stitches. In November 2005, tacrolimus was converted to sirolimus because of Burkitt lymphoma diagnosed by abdominal computed tomography, lumbar puncture, and transhepatic biopsy. All lesions regressed. In January 2006, the patient received chemotherapy according to the current pediatric protocol because of recurrent Burkitt lymphoma in the liver and the kidney. In February 2008, the patient developed an asymptomatic diaphragmatic hernia, and underwent elective diaphragmatic hernia repair through a right posterolateral thoracotomy incision with Teflon mesh. The child made an uneventful recovery and was discharged 1 week after the operation. Nine months later, he presented with a high temperature, dry cough, and respiratory tract infection symptoms. In the preceding week, he had some coryzal symptoms, and was being treated for otitis media. On examination, he had an axillary temperature of 38ºC; there were no breath sounds in the right hemithorax. He had tachycardia (pulse rate, 130/min) and tachypnea (rate, 45/min). White blood counts, C-reactive protein, and sedimentation rate were 18.400 cells/mm3, 318 mg/L, and 75 mm/h at the time of evaluation. Results of blood gas analyses were normal. There were no changes in eating or bowel habits. The abdomen was soft and not distended. Empiric antibiotic therapy (include Ceftriaxone and Amikacin) was begun.

A radiograph of the thorax was performed because of suspected pneumonia showing a diaphragmatic hernia with enterothorax on the right side (Figure 1A). Computed tomography examination showed a diaphragmatic hernia, and signs of acute appendicitis (Figure 1B). He was operated on through the previous right subcostal incision. On exploration, a posterolateral 4 × 2 cm defect was found in the right side of the diaphragm, through which the large bowel moved into the right thorax (Figure 2A, B). Typical findings of an inflamed and edematous appendix were found in the hernia sac (Figure 2C). The patient had evidence of perforation, and the appendix was removed. Histologic examination of the appendix was in agreement with the intraoperative diagnosis. The defect was extended laterally. After the repositioning of the intestine to abdomen, a chest tube was placed, and the defect repaired with interrupted polypropylene suture (Figure 2D). Clear oral fluids were initially well-tolerated on postoperative day 1 and gradually increased during the course of the preoperative regimen. The tube was removed on postoperative day 3. The patient resumed preoperative immunosuppressive dosing immediately after surgery. Assessment of liver function studies postoperatively demonstrated no significant deterioration from preoperative values. He recovered rapidly. Two months after surgery, the results of a follow-up chest radiograph were normal, and the patient was discharged from the hospital. At the time of this writing, his 18-month postoperative follow-up, and his graft function are good.

Diaphragmatic hernia is generally classified as either congenital or acquired. Acquired diaphragmatic hernia is typically posttraumatic in nature. In blunt truncal trauma, the diaphragm typically “ruptures” at a congenitally weak area in the posterior aspect of the diaphragm between the costal and lumbar portions.3 Injury to the diaphragm during surgery has been reported in patients undergoing radiofrequency ablation, particularly in patients with lesions adjacent to the diaphragm, and in open and laparoscopic-assisted liver resection.4, 5 Herniation through an acquired diaphragmatic injury occurs for 3 reasons: pressure differential between abdominal and thoracic cavities; delayed healing caused by constant motion of the diaphragm; and thin musculature of the diaphragm.6 Poor nutrition and ascites are also thought to play a role.4 The combination of ischemia caused by diathermy with abdominal overpressure owing to oversized liver grafts might lead to focal diaphragmatic necrosis, progressing later to eventration or herniation.7

Diaphragmatic hernia after pediatric liver transplant is a rare complication. The frequency of diaphragm dysfunction or paralysis is 8% to 15% in children who undergo a transplant.8 McCabe and associates reported 2 children with a body weight below 6 kg who developed an enterothorax after liver transplant.7 These patients usually need prolonged ventilation and may need plication of the diaphragm.8 Ipsilateral pneumothorax, recurrent eventration, and rupture of the suture line have been reported after diaphragmatic plication.9 Similar to other studies, our patient had a diaphragmatic hernia and low weight.

Appendicitis is a common surgical problem that is seen with relative infrequency in the transplant population. In nonimmunosuppressed patients, perforation varies with the age of the patient population but has been cited to occur between 8% and 41.5%.12 In addition, the preoperative white blood cell count is directly related to the risk of appendicitis.12 Incidence of perforation with appendicitis after liver transplant is high because of immunosuppressive therapy. Among transplant recipients, appendiceal perforation also has been attributed to cytomegalovirus infection.13 Histologic review of our surgical specimen did not demonstrate evidence of cytomegalovirus infection. The course of our case demonstrates that clinical signs of enterothorax after liver transplant may present acutely or delayed, and show a great variety because liver transplant recipients commonly have abdominal and pulmonary complications such as enteritis, adverse effects from immunosuppressive medication, pneumonia, cholangitis, or bile duct strictures.14

In conclusion, although the rates of appendicitis after transplant are currently still quite low, we believe that it will be seen more frequently with increasing numbers of solid-organ transplant. To our knowledge, this is the first case of acute appendicitis in enterothorax after diaphragmatic hernia in a pediatric liver transplant recipient. 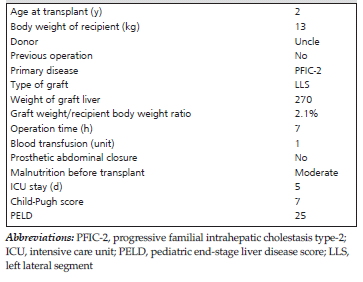 Table. Details of the patient’s demographic and operative characteristics. 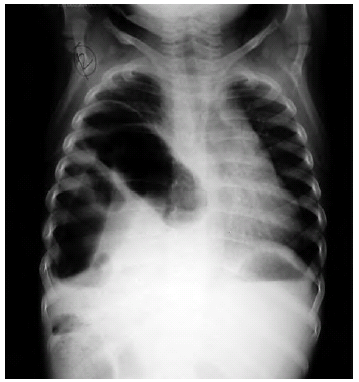 Figure 1A. Postero-anterior radiograph showing a diaphragmatic hernia with enterothorax on the right side. 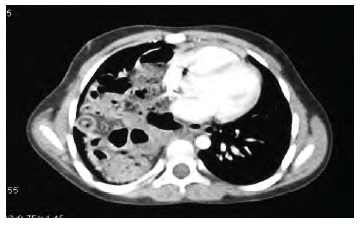 Figure 1B. Computed tomographic scan showing bowel in the chest and acute appendicitis. 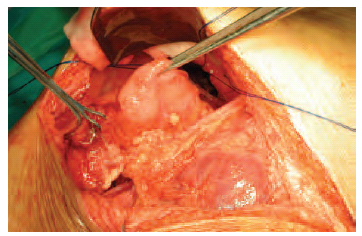 Figure 2A. Intraoperative photograph of the right hemithorax demonstrating diaphragmatic defect, with the large bowel moved into the right thorax. 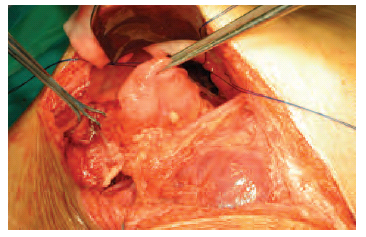 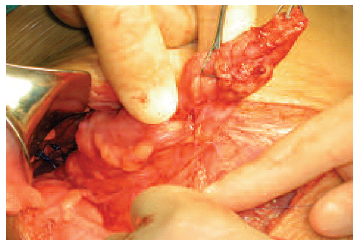 Figure 2C. An inflamed and edematous appendix in enterothorax. 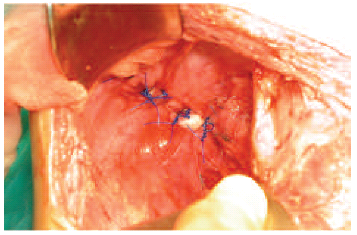