Renal transplant is the treatment of choice for most patients with end-stage renal failure.1 Renal transplant improves the quality of life and increases the recipient’s life expectancy.2, 3 There is a global imbalance between organ demand and availability.4 This has led to many compromises to expand the donor pool. Nonheart-beating donors and age expansion have significantly improved the donor pool.5 However, pediatric donation, particularly those less that 2 years of age, is still not widely accepted for transplant owing to fear of graft thrombosis, small nephron mass, rejection, and claims of overly poor graft and patient survival.6, 7

In the case presented here, we discuss our successful experience of transplanting en bloc pediatric kidneys from the youngest, nonheart-beating pediatric donor so far in the United Kingdom into an adult recipient (UKT/NHSBT Bristol BS34 8RR United Kingdom).

An en-bloc nonheart-beating kidney (Maastricht category III) retrieval was performed on a 19-month-old child with a body weight of 12 kg, after hypoxic brain injury secondary to accidental asphyxia (Figure 1). Considering the age and weight of the donor, a 36-year-old woman with a body weight of 56 kg was selected. The human leukocyte antigen mismatch was 00:00:01. The transplant was performed using a standard extraperitoneal approach. The donor’s aorta was anastomosed to the recipient’s common iliac artery, and the donor’s inferior vena cava to recipient’s external iliac vein in an end-to-side fashion. Separate uretero-vesical, mucosa-to-mucosa anastomosis using an on-lay technique was performed with 2 J-J ureteric stents in situ (Figure 2). Both kidneys had immediate good perfusion and had primary graft functions. Total ischemia time was 15 hours and 23 minutes (the time from when the donor’s ventilatory support ceased until perfusion with the recipient’s blood), first warm, cold, and second warm ischemia times were 23 minutes, 14 hours, 31 minutes, and 29 minutes. Postoperative recovery was uneventful, and the patient was started on dual immunosuppression therapy: tacrolimus and mycophenolate mofetil. The recipient had a routine prophylactic dose of dalteparin sodium and aspirin as anticoagulant.

The recipient was discharged home on the eighth day after surgery. A regular outpatient follow-up was done to monitor allograft functions. Three months after the transplant, mycophenolate mofetil was stopped after there was neutropenia with no adverse effects on the allograft functions. Six and 9 months after the transplant, the recipient’s estimated glomerular filtration rate was 96 mL/min and
95 mL/min as compared with a pretransplant estimated glomerular filtration rate of 13 mL/min.

Antenatal development of the human kidney begins at the end of the first month, and the kidney becomes functional in the course of the second month. In the last trimester, the fetal kidney already manifests the first changes. From then on to its adult maturity, the kidney is characterized by intensive processes but also evident changes.9

After birth, there is a further process of structural and functional maturation of the kidneys. With a definitive number of nephrons at birth, its renal mass increases at the expense of growth of certain nephron structures and interstitium. The human kidney reaches the concentration capacity of the adult by age 18 months, and reaches its full anatomic and functional maturity by the end of the third decade of life.10 Although the mechanisms behind these developmental changes in regulating renal growth are largely unknown, age-dependent changes in expressing several proto-oncogene products have been demonstrated. These include growth factor receptors as well as components of the intracellular system that transfers the signal from an activated growth factor receptor to the cell nucleus.11 Little is known about growth and development of pediatric donor kidneys after transplant. However, a few studies suggest that en bloc kidney transplants grow rapidly and provide excellent function in the adult recipient.12

Furthermore, pediatric renal transplant from nonheart-pediatric donors is considered suboptimal because of perceived ischemic damage and other associated risks. Many pediatric transplant centers in the United Kingdom are reluctant to use these kidneys for transplant, probably because of the high risk of thrombosis and delayed graft function and rejection, in this group of donors.

We believe that careful selection of the recipient considering their body mass index to avoid an imbalance between nephron mass and metabolic demands may have contributed to the successful outcome. It is possible that the risk of thrombosis was reduced significantly by the prophylactic anticoagulation. 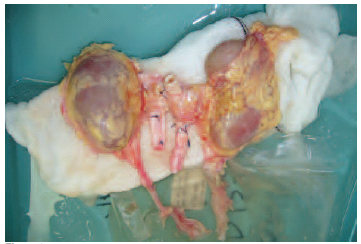 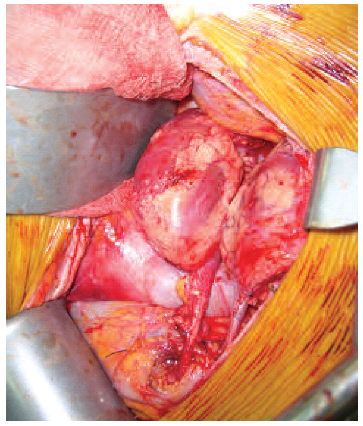