Objectives: Living-donor liver transplant provides an alternative source of organ to patients with end-stage liver disease. This study sought to determine and classify the donor morbidities after right lobe donor hepatectomy in a single center.

Materials and Methods: One-hundred eighty-one right lobe living-donor hepatectomy were performed in our center between January 2004 and December 2009. Of the 181 donors, 104 donors were men and 77 donors were women. Mean age of the donors was 38 years (range, 18-63 years). The mean follow-up was 33.3 months (range, 3-66 months). Complications after the operation were stratified according to the Clavien classification.

Results: Eighty-one complications occurred in 73 of the 181 donors (40.3%). The most common complication was wound infection, which was seen in 14 of 181 donors (7.7%). Biliary complications were seen in 4.4% of donors. There was no postoperative mortality. Also, grade 4 complications, which are life-threatening, did not occur. Blood transfusion were not required during the operation. The incidence of reoperation was 1.6% in all donors.

Conclusions: Living-donor liver transplant ensures a new graft to patients with end-stage liver disease. Donor morbidity is one of the realities of the donor hepatectomy procedure. Because the donors are healthy individuals, the aim of the process must be to eliminate the donor mortality while decreasing the complication rates.

After the beginning of adult-to-adult right lobe liver transplant in 1996,1 donor right hepatectomy has been widely performed in countries where there is shortage of deceased donors. Along with these developments, donor safety has become an indispensable reality. Donor right hepatectomy is one of the major surgical procedures. Because living-liver donors are individuals, in good health, uniform reporting of donor complications is necessary. Clavien’s classification is the most-commonly used system in evaluating postsurgical complications. Donor morbidities range from 0% to 100%, with a median of 16.1%. Biliary complications and infections are the most-commonly reported morbidities.2 This study presents donor morbidities that were seen in right lobe of living donors after the donor hepatectomy in a single center.

The right hepatectomy was performed through a right subcostal incision with extension to the upper midline. Intraoperative ultrasonography was routinely performed to determine the configuration of the vessels and to determine the transection line. The right lobe of the liver was mobilized by dividing the triangular ligament, and the tiny hepatic veins draining the right caudate lobe were ligated. The right inferior hepatic vein larger than 5 mm was preserved for the anastomosis. Afterwards, the cholecystectomy hilar dissection was performed to free the right hepatic artery and right portal vein. The demarcation line was determined by temporary clamping of the right portal vein and artery.

Parenchymal transection was performed without pedicle clamping using a Cavitron ultrasonographic aspirator (CUSA, Valleylab, Boulder, CO, USA) that was bipolar electrocautery equipped. Hemostasis of vessels smaller than 3 mm were performed using irrigated bipolar coagulation. Larger vessels or biliary components were ligated with clips or sutures. Intraoperative cholangiography was routinely performed before bile duct splitting. The right hepatic duct was divided near the confluence of the bile ducts. The defect on the common hepatic duct was closed horizontally with 6-0 monofilament absorbable sutures. The harvesting procedure was completed by clamping and dividing the right hepatic artery, right portal vein, and right hepatic vein. The right portal vein and hepatic vein stump were closed. Methylene blue was injected through the cystic duct to test for bile leak, and only 1 drain was put into the abdomen. All donors were extubated before leaving the operating theater. They were followed in the intensive care unit on first postoperative day. The nasogastric tube was removed on postoperative day 1, and liquid foods were started. Patient-controlled analgesia was given routinely by pump infusion along the 48 hours. The catheter was removed 72 hours after the surgery. No antibiotic prophylaxis was continued after the surgery. Biochemical and liver function tests were checked daily the first week, then biweekly for 3 months. The drain was removed if there was no bile leak, or abdominal collection in control ultrasonography on postoperative day 5. Complications were determined according to the Clavien classification system.3 The Clavien system is defined in Table 1.

Between 2004 and 2009, 181 right lobe living-donor liver transplants were performed at the Florence Nightingale Hospital Transplantation Center in Istanbul, Turkey. Of the 181 donors, 104 donors were men and 77 donors were women. Mean age of the donors was 38 years (range, 18-60 years). The mean follow-up was 33.3 months (range, 3-66 months). Remnant percentage to donor total liver volume was 34.8% (range, 26% to 47%). Middle hepatic vein was taken from 72 donors (39.6%). The mean length of donors postoperative hospital stay was 8.91 days (range, 5-34 days). Blood loss ranged from 100 to 1000 mL (mean, 398.6 mL). Demographic and surgical characteristics of the donors are shown in Table 2. There was no postoperative mortality. Blood transfusion was not required during the operation. The incidence of reoperation was 1.6% in all donors. According to the Clavien classification, 81 complications occurred in 73 of the 181 donors (40.3%). Thirty-two of 81 complications were grade 1 (39.5%), and 30 complications were grade 2 (37%). Major complications consisted of 9 grade 3a (11.1%) and 10 grade 3b (12.3%). Grade 4 and 5 complications did not occur. All donor complications according to the Clavien classification are presented in Tables 3 and 4.

The most-common complication was wound infection, which seen in 14 of 181 donors (7.7%). Because of the prolonged nausea, 9 donors (4.9%) received total parenteral nutrition for a few days. Eight donors (4.4%) developed abdominal collection. Four of 8 donors with abdominal collection underwent percutaneous drainage.

Donor right hepatectomy is a major operation that carries with it the risk of multiple morbidities. Because right lobe donors have smaller remnants than the left lobe, morbidities are seen more frequently in the right lobe donors. There is a great necessity to unbiased reports and defining of the complications especially when the healthy individuals were operated on for organ donation.

Morbidity of the right hepatic lobe donation ranges from 0% to 67%.6-12 This wide range of complication rates is probably associated with the extent of liver donation segments and the lack of consensus on the definition of a complication. Some investigators may have included every minor postoperative complication, whereas others reported only severe or life-threatening complications. Complications arising from surgery occur in 9% to 19% of donors, including wound infections, small bowel obstruction, pneumonia, and incisional hernia.13

Data collected from 38 Japanese centers (including 3565 living donors), and from Asian centers (including 1508 donors) revealed that the incidence of complications in right lobe donors was 9.4 %14 and 15.8%.15 While reoperation incidence was 1.1%, cholestasis (7.3%), and bile leakage (6.1%) were the most-common complications in right lobe donors.14

Biliary complications, including bile leaks and strictures, have been reported in 0% to 7% of donors.13 A review of the experience in the United States reported biliary complications requiring intervention in donors at a rate of 4%.16 Cholestasis occurred in 3.8% of donors, biliary leak, or stricture was seen in 4.4% of our donors. These results were consistent with the literature.

Living-donor liver transplant ensures a new organ to patients with end-stage liver disease. Nevertheless, morbidity after right lobe donor hepatectomy probably occurs in a third of all the donors. If the healthy individuals are operated on for liver donation, donor safety must be a priority. All donors must receive detailed and unbiased information about the risks. 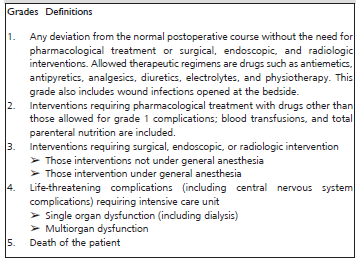 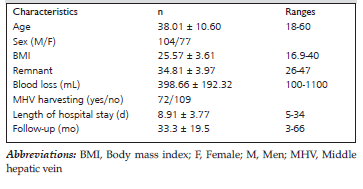 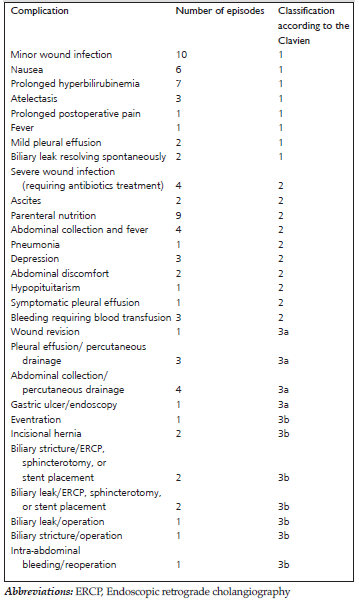 Table 4. Analysis of complications according to the Clavien classification.