Conclusions: Of the currently available comorbidity scores, the Recipient Risk Score demonstrated greatest use. This has implications for deceased-donor allocation algorithms, assessment of confounders in clinical research, and potentially, individual patient management.

Surprisingly, little evidence exists quantifying the importance of comorbidity in renal transplantation, despite the burden of comorbid conditions present in patients with kidney disease and the effect of these conditions on mortality and graft failure. Assessment of the prevalence and consequences of comorbid conditions has important implications for individual patient management, for clinical research where adjustment for comorbid confounders is necessary, and in developing organ allocation policies. With regard to the latter, organ allocation algorithms based on either pure utilitarian principles (designed to maximize allograft lifespan) or on “net lifetime survival benefit” (designed to maximize overall patient survival on the wait list) are critically dependent on incorporating comorbidity assessment.

Other validated indices include the Davies index (derived from peritoneal dialysis patients) and the Wright-Khan scoring system (derived from patients starting renal replacement therapy).7-9 The Fole­­y score, a lesser known but clinically applicable prognostic scoring system (developed to aid in the prediction of death within 6 months of starting maintenance dialysis), has not been validated in a separate test population.10 More recently, the Recipient Risk Score has been developed as a practical system that when combined with a method to assess donor organ quality may improve deceased-donor kidney use.11, 12 The Recipient Risk Score is the first comorbidity score developed specifically for renal transplant recipients.

This study sought to comprehensively assess and compare the use of 7 comorbidity scores in predicting mortality in renal transplant recipients.

Patient population
The Long-Term Efficacy and Safety Surveillance (LOTESS) database was interrogated for the analysis. The Long-Term Efficacy and Safety Surveillance is a pharmaceutical-industry–funded pharmacovigilance project that collects data on renal transplant recipients treated with microemulsion cyclosporine therapy. Long-Term Efficacy and Safety Surveillance is an open, observational cohort study, and is conducted according to the guidelines for the safety of marketed medicines, the design of which has been described in detail previously17 and has yielded valuable insight into renal transplant outcomes in previous analyses.18, 19 Patients from 64 centers in the United Kingdom were recruited between 1995 and 1998 and followed prospectively for up to 7 years. Participating centers submitted anonymized data on a 3-month basis to the central medical information processing and statistics department; data were collected by trained professional study monitors operating to good clinical practice standards. Although the database is limited to patients treated with microemulsion cyclosporine, the use of alternative calcineurin inhibitors (ie, tacrolimus) was uncommon in the United Kingdom during the period of data collection, and therefore, is largely representative of the United Kingdom renal transplant population as a whole.

Data were analyzed for incident adult (age ≥ 16 years) renal transplant recipients who displayed a complete set of data for the clinical variables described below. The study conformed with the ethical guidelines of the 1975 Helsinki Declaration.

Primary variables of interest: mortality and comorbidity
The outcome measure of interest was patient mortality, assessed by survival from the time of transplant until death or study termination. As with most data sets, information regarding death after graft loss is incomplete, and therefore, the analysis focuses on death with graft function. The exploratory variables of interest were the various comorbidity scores measured at baseline (ie, at the time of transplant). Scores were selected for analysis based on relevance to the renal population or prior validation in renal patients, recent development, and practicality of use. Relevant recipient demographics were collected to derive results for the comorbidity scores (detailed in the appendix to this manuscript). The “raw” comorbidity data (a total of 1303 possible qualifiers as individually reported comorbidities) submitted by the transplant centers was hand-searched and assimilated into each score category by both JM and RB, with disagreement resolved by discussion. For example, cardiac failure, cardiac failure chronic, cardiac failure congestive, left ventricular failure, ventricular failure, were all classified as congestive heart failure for the Charlson Comorbidity Index.

The analysis was not performed by merely developing a single multiple regression model after a selection process to identify the comorbidity score(s) that were significant in the final model. Rather, and to overcome the inherent colinearity between these scores, separate models were built, each of which contained only 1 comorbidity score along with other relevant baseline covariates (see below). The goodness of fit for each model was then compared using methodology described in the “statistical analysis” section below. Comorbidity indices contained within each model were as follows, and are detailed in the appendix:

Other data collection
To control for confounding factors in the analyses, the following baseline variables (assessed at the time of transplant) also were collected and entered into each of the models: Donor demographics: age, sex, race, and source (live- versus deceased-donor). Recipient demographics: age, sex, race (white versus Indo-Asian versus black versus other), duration of dialysis, dialysis modality (hemodialysis versus peritoneal dialysis), prior transplant, induction immunosuppression (depleting antilymphocyte antibodies versus anti CD25 monoclonal antibody versus none), use of mycophenolate (versus azathioprine), and body mass index.

Statistical analyses
The SAS software package for Windows (SAS Institute Inc., Cary, NC, USA) was used for the analyses. Summary statistics are shown as mean ± standard deviation unless stated otherwise. Time to event analyses was performed using the Cox model. Factors showing an association with events on univariate analysis (P < .15) were entered into the multiple regression models. The final model was constructed by means of a forward conditional stepwise selection process. In light of the colinearity between the various comorbidity scores, an analysis was not performed entering all the formulae as covariates into a single analysis. Rather, separate models were built, each containing 1 of the comorbidity scores (ie, 7 models in all, each containing 1 of the 7 comorbidity scores along with the other independent variables). Goodness of fit for the models was then compared using the Akaike information criterion. The Akaike information criterion is a statistical tool for ranking the models, with a lower Akaike information criterion suggesting a better fitting model.

Study group outcomes
A total of 2033 adult (age ≥ 16 years) renal transplant recipients were available for analysis. Demographics of the group are shown in Table 1. All patients were treated with cyclosporine microemulsion, with 77% treated with adjunctive azathioprine and 4% with mycophenolate mofetil. Corticosteroids were administered to 91%. The values for the various comorbidity scores, assessed at the time of transplant, are shown in Table 2.

Independent importance of recipient age in predicting mortality
From the previous time to event analyses, it was clear that recipient age was associated with mortality in patients selected for transplant, and this effect was independent of comorbidity. The results of the receiver operating characteristic curve analyses also were consistent with this: Figures 1A and 1B show that comorbidity indices that incorporate age (Recipient Risk Score, Age-adjusted Charlson Comorbidity Index, Foley Score, and the Wright-Khan Index) displayed higher area under receiver operating characteristic curve values than those indices that not incorporate age (the Charlson Comorbidity Index, the Modified End-Stage Renal Disease Charlson Comorbidity Index, and the Davies Index).

The predictive characteristics of the 7 established comorbidity indices were broadly consistent across all analyses. Firstly, when comparing baseline comorbidity scores that incorporate age separately from those not incorporating age, the results suggest that the models based on the Recipient Risk Score and the Charlson Comorbidity Index showed the best fit. Secondly, comparing all scores together in a similar model, but this time stratifying for age, the superiority of the Recipient Risk Score-based model was demonstrated. Thirdly, receiver operating characteristic curve analysis demonstrated the Recipient Risk Score to have the greatest discriminatory use of all comorbidity scores studied for mortality at both 3 and 5 years after transplantation, with an area under the receiver operating characteristic curve of 0.762 and 0.787. Therefore, the Recipient Risk Score correctly discriminates between patients surviving and dying approximately 75% of the time. Receiver operating characteristic curves are best used for continuous covariates, and therefore it can be argued that scores such as the Wright-Khan Index and the Davies index (which were divided into only 3 and 4 categories) are not best suited to this type of analysis. However, consistency of results across the different analytic methods lends support to the robustness of the conclusion.

The superiority of the Recipient Risk Score most likely reflects the method of derivation, having been developed specifically for assessing renal transplant recipients. The other indices were developed in different populations, and comprise certain individual comorbidities of questionable relevance to transplantation. Dialysis duration (comorbidity unique to transplant recipients) is incorporated into the Recipient Risk Score and is not included in the other tested scoring systems. Furthermore, in addition to the use of age and diabetes as score components, the “synergistic” interaction between these 2 variables in construction of the score (see appendix) may be important, and give insight into the particular relevance of these factors (over and above other comorbidities encountered in patients selected for renal transplant) in determining outcome.

Identifying the optimal baseline comorbidity score for renal transplant recipients has implications for organ allocation policy. Of particular interest, it has been suggested that matching recipient to graft survival may improve the use of donated organs, and assessment of this has been conducted previously, with a focus on using the Recipient Risk Score in conjunction with a “deceased donor score.”11, 12, 20 Aside from a pure “utilitarian” approach, recent revisions in allocation policies focus on maximizing “quality-adjusted net lifetime survival benefit” to the recipient (or “life years from transplant”); these also require accurate comorbidity assessment. The Recipient Risk Score itself may prove its use as allocation algorithms are continually refined. No attempt has been made in the current study to address whether matching donor and recipient characteristics might optimize either organ or recipient lifespan: larger datasets are required for this. Rather, the purpose of the analysis was to define the optimal comorbidity score, and the results suggest that there is currently no better alternative to the Recipient Risk Score in predicting subsequent mortality, so supporting its role in optimizing the overall use of a limited donor organ pool. Importantly, the current study validates the Recipient Risk Score in a population separate to that in which the score was initially derived.

In addition to the potential value for allocation strategies, use of the optimal comorbidity index in future studies of transplanted and wait-listed populations could allow simpler and potentially more-accurate assessment of comorbidity as a confounder. Furthermore, the moderate-to-good–predictive performance of the best-performing scores (area under receiver operating characteristic curve 0.7-0.8) suggests they may have some role to play in decision-making and counseling at the level of the individual patient, although their effect on decision-making will necessarily depend on the specific clinical scenario. Certainly, the decision to transplant or not to transplant a patient based solely on their comorbidity is not supported by this study.

It is acknowledged that the studied population is characterized by relatively low numbers of live-donor transplant recipients, low numbers of diabetic and ethnic minority recipients, and well HLA-matched grafts. Despite this, we believe that the results are likely to be generalizable to other populations. Indeed, this study confirms the association between Recipient Risk Score and outcome shown in North American registry data set analysis.11 We also recognize the retrospective nature of the study accrues the potential for biases associated with such investigations.

In summary, this analysis confirms the importance of comorbidity in renal transplant, and extends current understanding of the performance of currently available comorbidity scores. We propose the Recipient Risk Score to be a simple and effective tool for assessing comorbidity.

A weighted score, ranging from 0 to 37. (All patients score a minimum of 2 owing to the universal presence of renal failure in our population) calculated as follows:

A weighted score, ranging from 0 to 33, calculated as follows:

Identical to the original Charlson Comorbidity Index, with the exception that 1 point is added for each decade of age over 40 years.

A weighted score, with range from 1 to 22, calculated as follows:

A nonweighted score, ranging from 0 to 7, calculated as follows: 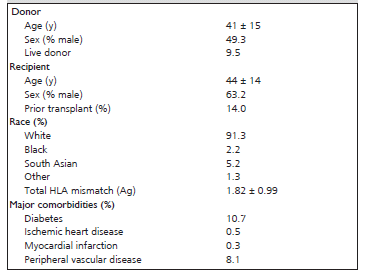 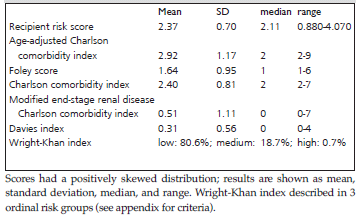 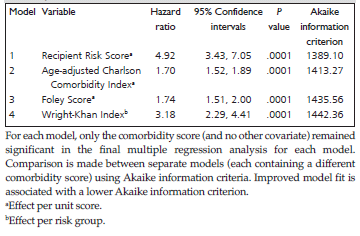 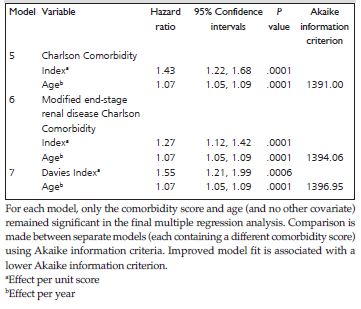 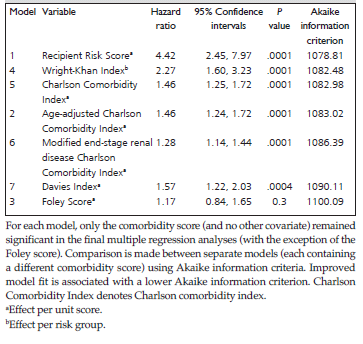