Objectives: Cardiovascular events are a major cause of mortality and morbidity of chronic renal failure causing 40% to 50% of all deaths in these patients. The intima-media thickness of the common carotid artery is used to predict atherosclerosis. To assess the effect of early renal transplant on the vascular atherosclerosis, we compared the common carotid intima-media thickness between dialysis and transplant patients.

Materials and Methods: In a cross-sectional study, 75 kidney transplant recipients and 75 dialysis patients were assessed in a subspecialized renal and urethral diseases center from April 2008 to March 2010. Demographic characteristics, smoking history, and information on comorbid and kidney diseases were recorded through a checklist. The common carotid intima-media thickness was measured using ultrasonography. Spearman's rank correlation coefficient was used to find any correlation between duration of dialysis and intima-media thickness.

Cardiovascular events are the major causes of mortality and morbidity in patients with advanced renal failure causing more than 40% to 50% of mortalities in these patients.1 As a result, predicting the incidence of cardiovascular events in these patients is of great importance. Currently, the intima-media thickness of common carotid artery is quite a well-known index of atherosclerosis. Compared with coronary angiography (the criterion standard in evaluating coronary artery atherosclerosis), intima-media thickness is a noninvasive, easy to tolerate for the patient, and repeatable method. However, there is a direct association between the risk of cardiovascular or cerebrovascular events and intima-media thickness; its dynamic changes (according to the patient metabolic status) make it as a good tool for evaluating the efficacy of therapeutic interventions in subsequent follow-ups.1, 2 According to the results of many studies, intima-media thickness is accepted (like the normal population) as an independent predicting factor for mortality due to cardiovascular events in dialysis patients.3-5 Renal failure, using different mechanisms (including hypertension, calcium and phosphorus metabolism disorders, hyperlipidemia) leads to intensified and accelerated atherosclerotic process in the body, and, as a result, increased risk of cardiac and cerebral vascular accidents that increase intima-media thickness of the carotid artery as a reliable sign.6

On the other hand, in patients with renal failure of various causes, transplant is better done as soon as possible, because it has been proven that cardiovascular morbidity in patients with renal failure is 20 times that of the normal population.7, 8 Besides, correcting the metabolic status of the body by applying effective treatments such as kidney transplant can at least modify the cardiovascular damage process. Lima and associates showed a significant decrease in carotid intima-media thickness in a 3-year follow-up of 22 adult transplant patients.9 Other studies have shown that kidney transplant could reduce patient intima-media thickness by modifying blood pressure and glucose.10 Considering the previously mentioned facts, and to evaluate the effect of kidney transplant on vascular atherosclerosis and the accompanying mortality, this study sought to compare common carotid artery intima-media thickness (as an index of vascular atherosclerosis and a risk indicator for cardiovascular disease) in 2 groups of patients; a group of patients under dialysis for a certain duration, and a group of kidney transplant recipients.

Materials and Methods
The study protocol was approved by the Institutional Ethics Committee of the Iran University of Medical Sciences and follows the ethical guidelines of the 1975 Helsinki Declaration. After written, informed consent was obtained, a cross-sectional study was performed on dialysis patients and kidney transplant recipients referred to Shahid Hasheminejad Sub-specialized Renal and Urethral Diseases Center, Tehran, Iran, for dialysis or postoperative follow-up during 2008-2010. The center is a referral one, accepting patients with renal failure for dialysis or kidney transplant. The majority of the transplant patients refer to the nephrology clinic at regular intervals (varying from 6 to 12 months) for follow-up.

Among patients receiving kidney transplant before this time, we studied patients referred to us for follow-up during April 2008 to March 2010; 75 patients were included. For the control group, we studied 75 dialysis patients by randomly choosing from the available patients’ data in the Hasheminejad center data set.

A check list was completed to evaluate the demographic characteristics (age and sex), history of smoking, comorbidities (hypertension, hyper­lipidemia, diabetes mellitus), and renal disease including cause of renal failure, dialysis duration, and duration after transplant. Intima-media thickness of the common carotid artery was measured in all patients.

Determination of the common carotid intima-media thickness
Using a high-resolution ultrasonography machine (Technus MP; Esaote, Genoa, Italy) provided us with a variable band 4- to 13-MHz linear array transducer (model LA 523), the common carotid artery was scanned for each subject in the supine position with the neck semiextended. All measurements were done blindly by the same operator. The distance from the leading edge of the first echogenic line, to the leading edge of the second echogenic line, at the level of the lower segment of the common carotid artery, 0.5, 1, and 2 cm distant from where the diastolic phase bifurcates was measured bilaterally. Intima-media thickness was considered as the mean of 6 measurements (3 on each side). No measurements were made on the sites where a plaque existed.

Statistical Analyses
Statistical analyses were performed with SPSS software for Windows (Statistical Product and Service Solutions, version 16.0, SSPS Inc, Chicago, IL, USA). Qualitative variables were expressed as frequency and relative frequency (expressed in percentages). To test distribution normality, a Kolmogorov-Smirnov 1-sample test was used; quantitative variables with normal distribution range included age and intima-media thickness, while dialysis and transplant duration were nonnormal distributed quantitative variables. To compare the 2 groups for comorbidities (history of hypertension, hyperlipidemia, and diabetes mellitus), history of smoking, and increased risk of stroke and cardiovascular disease, the chi-square test was used. As duration of dialysis and intima-media thickness were not distributed normally, Spearman's rank correlation coefficient was used for any correlation between these 2 variables.

A total of 150 patients (75 dialysis and 75 transplant patients) were included in the study. There was no statistically significant difference in age, sex, hypertension, diabetes mellitus, and smoking between the 2 groups (P > .05), but there was a significant difference in serum calcium, phosphate, and systolic blood pressure between the 2 groups (Table 1).

Subclinical atherosclerosis occurs in early stages of renal function reduction. Disease progression occurs as a result of several cardiovascular conditions, including increased volume (secondary to sodium retention), high blood pressure, insulin resistance, and glucose intolerance. Also, patients with decreased renal function have abnormal vascular biological characteristics. As a result, progress in renal disease results in a series of disruptions including oxidative stress, exacerbated inflammation (increased C-reactive protein), and increased serum levels of homocysteine; microalbuminuria and proteinuria are also predictive for cardiovascular disease in end-stage renal disease patients. In a study on elderly patients, impaired renal function also was accompanied by harmful changes in the arterial structure4; the changes occurred early in the course of worsening of renal disease and were prognostic of cardiovascular consequences.

As recently indicated, mild decrease in renal function is associated with increased risk of cardiovascular mortality,31 and increased serum creatinine level is one of the strongest predictors of mortality.32 As a result, kidney transplant has important advantages compared with long-term dialysis, especially in patient survival.33 Although postoperative drugs are also added to previous cardiovascular risk factors, increased patient survival indicates the effective role of kidney transplant in control of cardiovascular disease.

High blood pressure, diastolic interventricular septum, posterior left ventricular wall thickness, and low ejection fraction existing before kidney transplant, regress with a successful transplant. Also, significant improvement in cardiovascular function occurred owing to increased ejection fraction and improved fractional shortening.34 This might be a result of improved cardiac metabolism owing to elimination of uremic toxins in the circulation. Autopsy showed a less intermyocardiocytic fibrosis in transplant patients compared with advanced dialysis patients, suggesting an improved cardiac condition after correction of a uremic state.35 Hyperparathyroidism and hypo­calcemia are of the main risk factors of uremic cardiomyopathy.36, 37 After successful kidney transplant, hyper­parathyroidism is significantly reduced. Improved anemia after kidney transplant can improve cardiac function as the treatment of anemia in dialysis patients with erythropoietin may reduce the cardiovascular disease.37

Although a reduction in cardiovascular events after transplant as a result of improved uremic state, decreased platelet activity and improved endothelial and microfilament function is expected;38-40 however, a combination of other factors (eg, smoking, hypertension, diabetes mellitus, anemia, and physical inactivity) accompanied by transplant-specific risk factors (including immunosuppressive drugs [cyclosporine]), tends to overcome new-onset, posttransplant diabetes.41, 42 As a result, atherosclerosis remains one of the early post­transplant events in asymptomatic patients and those with major risk factors (including cardiovascular disease, diabetes, and smoking) which makes early diagnosis and treatment in these patients of great importance.11 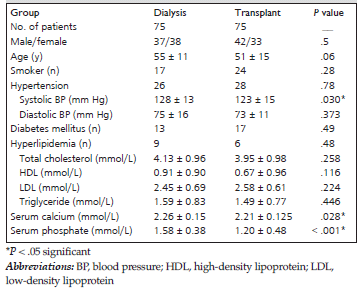 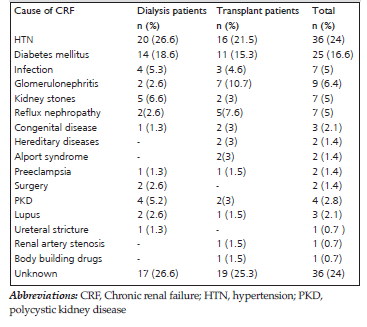