Patients and Methods: In China, live-kidney transplant is limited. It is even more essential now, because the deceased-donor kidney has become fewer after enacting the Chinese Regulation on Human Organ Transplantation. Therefore, there is a continued need to use the limited live-donor population. We chose 103 consecutive cases (84 left and 19 right) that underwent retroperitoneoscopic live-donor nephrectomy between December 2005 and December 2009, to compare the intraoperative and postoperative characteristics between the left and right sides, and report our experiences for 19 right-retroperitoneoscopic live-donor nephrectomies.

Results: All 84 left and 19 right-retro­peritoneoscopic live-donor nephrectomies were accomplished successfully without open conversion and transfusion. No significant differences were observed between the 2 groups regarding operative time, warm ischemia time, estimated blood loss, length of hospital stay, and serum creatinine level at discharge (Table 1). Eight of the donors and 3 of the grafts had minor complications that were all resolved with conservative treatment. The recipients’ serum creatinine levels at 1 day and 1 month after surgery were the same in both groups. No acute renal tubule necrosis or delayed graft function was observed in the recipients.

Conclusions: Our right-retroperitoneoscopic live-donor nephrectomy achieves comparable outcomes with the left side and proves to be a feasible, cost-effective, safe, and minimally invasive alternative for live-kidney donation. This maximally uses the innately limited donors and potentially increases the donor pool in China.

Laparoscopic live-donor nephrectomy was first reported by Ratner1 in 1995 with an aim toward a minimally invasive equivalent operation. This procedure, with the advantages of less blood loss, shorter hospital stay, improved cosmesis, lower morbidity, earlier return to normal activity, and equivalent graft function compared with open donor nephrectomy, potentially expanded the donor pool and was widely accepted.2-5 Live-kidney donation rate (the number of live kidney donations/total number of kidney donations) was 52% in the United States, 60% in Japan, and 45% in Singapore, in the year 2001.6 In China, live-kidney donation also increased after conducting laparoscopic live-donor nephrectomy, but is still far less compared with developed countries.

Between December 2003 and December 2009, a total of 141 retroperitoneoscopic live-donor nephrectomies were performed at our Institute. We selected the latter 103 sequential cases (84 left and 19 right) as subjects. Data were compared between the 2 groups in terms of age, body mass index, operative time, estimated blood loss, warm ischemia time, length of postoperative hospital stay, and serum creatinine level at discharge. Preoperatively, compatibility between donor and recipient was evaluated by a transplant team, and the relation as well as voluntary donations were confirmed by the ethics committee.6 The study conforms with the ethical guidelines of the 1975 Helsinki Declaration, and written, informed consent was obtained from all of the subjects.

The operative technique we adopted has been described in detail previously by Ye and associates.7 In brief, the patient is given general anesthesia and placed in a lateral decubitus position. The first trocar (12 mm) is placed below the tip of the 12th rib. After a small, initial, retroperitoneal space is created and a pneumoretroperitoneum is established, the other 2 trocars (10 mm and 5 mm) are inserted through the skin incision under direct laparoscopic vision. The renal hilum and vessels are circumferentially and fully mobilized. Tributaries of the renal vessels of the left kidney (including the inferior adrenal arteries, the adrenal veins, the gonadal veins, and the lumbar veins) are managed with ultrasonic coagulating harmonic scalpels. During laparoscopy, with adequate periureteral fatty tissue, the ureter is dissected 7 to 9 cm distally from the lower pole of the kidney, clipped with 2 metallic clips, and sheared between the 2 clips with scissors. A longitudinal 6-cm skin incision is made from the port of the 12-mm trocar. The subcutaneous tissues are divided, but the muscle and lumbodorsal fascia layers are left intact to maintain insufflation. Then, the renal vessels are controlled with 2 plastic, locking clips, flush with abdominal aorta and sheared with scissors at a stronger lateral traction for the right kidney, aiming to harvest sufficient length of innately shorter renal vein without any clips on the kidney side during the laparoscopy. Muscles under the skin incision and lumbodorsal fascia are cut immediately; the graft is retrieved gently by an inserted hand. The kidney is cooled on the bench and flushed with 100- to 200-mL iced perfusion solution.

In conjunction with wide use of laparoscopic live-donor nephrectomy, live-kidney donation rates show a considerable increase in the United States, Japan, and Singapore. In China, live-related, not live-unrelated, kidney transplants are currently permitted. The live kidney donation rate was 1.5% in 2001 (76/5000), 4% in 2002 (280/7000), and more than 2000 cases of live kidney donation were performed in mainland China in 2007.6 Although both the number and rate have sustained an increase in the past several years, live-kidney donation is still far less than developed countries. This unfavorable data results from the Chinese traditional concept of an intact corpse, lack of knowledge on kidney transplants, late development of laparoscopic live-donor nephrectomy, limited performance (which is done only in metropolitan transplant centers), and the state restrictions on the live-related kidney donation. Additionally, live-kidney transplants have become more essential with the scarcity of deceased-donor kidneys after the 2007 enactment of the Regulation on Human Organ Transplantation by the State Council. Therefore, it is urgent for the transplant physicians and surgeons in China to make best use of the limited live-kidney donor population.

We began our laparoscopic live-donor nephrectomy using a retroperitoneal approach in December 2003. As a routine procedure for laparoscopic radical nephrectomy and adrenalectomy at our institution, the retroperitoneal procedure also was preferred as a familiar approach to harvest live-donor kidneys. The initial 40 cases (38 left and 2 right) were excluded from this comparison to eliminate the influence of initial left preference in learning-curve period.

Our right-retroperitoneoscopic live-donor nephrectomy operative time was comparable with the left side in our cohort, with mean operative time shorter than those published.4 This favorable result benefited from the easier anatomy using a retroperitoneal approach, lower body mass index, and our time-saving improvements in technical detail.

Artery dissection: We incise the renal artery sheath with coagulated shears and dissect it along the direction of renal artery in the anatomic plane between the vessel and the sheath to achieve a safer and quicker performance.

Ureter location: We raise the renal lower pole and carefully make the dissection between it and the psoas muscle, exposing a white tubule with many small vessels on surface (which is the ureter). These improvements in technique create a more-efficient, effective, and safer procedure.

The postoperative stay of about 7 days is a little longer in our series than in others. Donors preferred a longer hospital stay until recovery is near normal and removal of the dermal sutures for the traditional Chinese concept. We retrieved the graft through a flank, longitudinal, 6-cm skin incision, which was extended from the port of 12-mm trocar. Compared with the suprapubic incision in transperitoneal approach, our flank scar is a little compromise in cosmesis. However, our method has the advantages of a more-direct and easier retrieval, which is the main reason we did not have complications related to graft retrieval.

First, a rubber pneumatic bag was kept in the retroperitoneum for 4 to 5 minutes for adequate dilation of retroperitoneal space and hemostasis of small bleeding. Second, peritoneal reflection should be adequately mobilized bluntly from the inner abdominal wall with a finger or blunt instrument before establishing the 5-mm trocar port. Though no peritoneum impairment was caused by negligent dissection in our series, precautions were emphasized.

Four scratches by laparoscopic instruments were observed. One donor had intraoperative hemorrhage with injury of the branch of left renal vessels that was stanched by ultrasonic coagulating shears. One graft on the left was lacerated superficially and repaired with absorbable sutures. Two grafts developed subcapsular hematomas—1 of which underwent a capsulotomy, and the other required no special treatment. The right graft was more likely to be impaired by forceful dragging when the renal vessels were clipped. Care must be taken to ensure the grafts are retracted with dull or convex faces, instead of the sharp faces or the tine of laparoscopic instruments. A piece of pledget is recommended on the surface of kidney for new learners.

One donor in each group developed postoperative retroperitoneal hematomas in the renal fossa and was cured by conservative treatment. Two donors who underwent a left retroperitoneoscopic live-donor nephrectomy developed a retroperitoneal chylous, which was cured by total parental nutrition without requiring a reoperation. This complication presumably was caused by insufficient coagulation of the lymphatic vessels around the renal artery, which acts as a warning for us to adequately coagulate the tiny lymphatic vessels before dissection of the renal vessels in future operations. These precautions helped us to achieve comparable results with left procedure regarding intraoperative and postoperative complications.

Primary concerns during right-laparoscopic live-donor nephrectomy focus on how to harvest a full-length renal vein. Mandal and associates9 and Turk and associates12 obtained almost a full-length of right renal vein by mimicking the right open donor nephrectomy with a cuff of the vena cava, using a vascular clamp on the inferior vena cava. Although a few more millimeters were obtained, the suture closure of the vena cava increases operative time, operative complexity, and postoperative bleeding. Buell and associates11 and Boorjian and associates5 suggested a hand-assisted method to improve tactile sensation and spatial orientation, which not only facilitates mobilization of the colon and dissection of the kidney, but also improves the lateral renal retraction and renal vein length. However, the hand hinders camera vision, produces a higher incidence of intraoperative pneumoretroperitoneal leakage, makes a longer skin incision, and also may increase postoperative pain. We do not think it necessary to take these risks, because sufficient artery and vein length were achieved to perform the recipient’s anastomosis in all of our cases.

Simforoosh and associates18 reported putting the right kidney, inverted, in the recipient’s right iliac fossa with satisfactory perioperative outcome and graft survival. The renal vein was placed posteriorly and adjacent to external iliac vein when the kidney was inverted, which overcame the problem of a short renal vein and yielded a safer vascular anastomosis. The left iliac vein is located deeper than the right one, and the sigmoid colon is also located in the left iliac fossa—all of these will interfere with the vascular anastomosis. This kidney-inverted approach makes vascular anastomosis safer and simpler, especially in obese patients with a deep pelvis.

In our practice, colon mobilization and liver retraction are obviated through a retroperitoneal approach. All 19 right kidneys were placed in recipients’ right iliac fossa. We applied several maneuvers to make the right renal vascular anastomosis easier.

Extend the right renal vessels: We handled the graft vessels by placing 2 plastic clips proximally flush with the vena cava or the aorta, without any clip on the kidney side, and divided it with scissors in a lateral retraction of the kidney with laparoscopic instruments to get sufficient length of the right renal vein. After graft harvesting, we separated part of the renal vein from the renal sinus to prolong the free part of the vein if necessary.

Our method can achieve equivalent outcomes by obeying the following rules:

From the Department of Urology, Peking University Third Hospital
Acknowledgements: All authors have seen the manuscript and approved its submission to your journal. Neither the entire paper nor any part of its content has been published or accepted elsewhere. It is not being submitted to any other journal. No parts of the manuscript are duplicated. No financial or other conflict of interests is declared.
Address reprint requests to: Gang Li, Department of Urology, Peking University Third Hospital, Haidian District, Beijing, 100191, People’s Republic of China
Phone: +010 82020576
Fax: +010 82020576
E-mail: ligang.1231@163.com 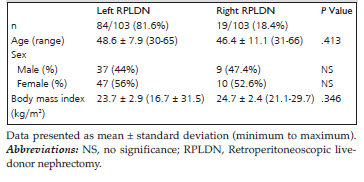 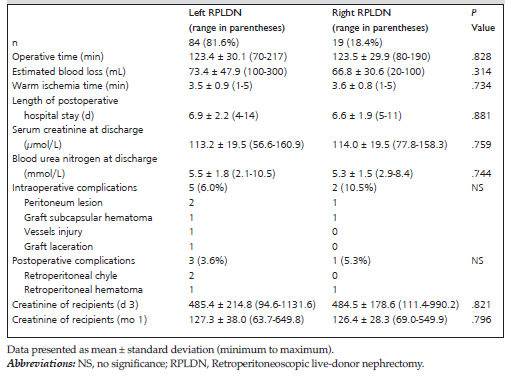