Materials and Methods: This study included all donors who had reached end-stage renal disease among 2000 consecutive living-kidney donors. All operations and follow-up were performed in a single center. We studied the onset of renal disease, cause of end-stage renal disease, date of replacement therapy, and outcome. We also revised the donor’s medical records related to their corresponding recipients.

Conclusions: Living kidney donation is safe, and development of renal failure after donation is caused by the same causes as in the general population.

The rapid increase in live-kidney donation has rekindled concerns about the risks involved in unilateral nephrectomy and its long-term consequences.1 Enthusiasm for living donation waned somewhat in the early 1980s with experimental reports of hyperfiltration after uninephrectomy and fear that living-kidney donation would worsen proteinuria, hypertension, and eventually glomerulosclerosis. However, these data were not born out in human studies, and living-kidney donation has steadily increased in the past several years and surpassed deceased-donor donation.2

The fundamental principle of “first do no harm” to the donors must be the primary consideration when contemplating living donation. Donors undergoing such a major operation with potential risks of perioperative morbidity and mortality should follow strict exclusion and inclusion criteria. The Amsterdam Forum set forth a comprehensive list of medical criteria that is currently used in our center as well as internationally for evaluating potential kidney donors. Standard tests were performed to assure donor safety that addresses the risk of immediate and long-term negative health consequences for live donors.3

In spite of all effort done for donor protection, several reports denoting donor morbidity and even end-stage kidney disease among donor population are emerging.4-6 During the follow-up, proteinuria, hypertension, reduced glomerular filtration rate, and long-term cardiovascular risk were on the top of the list.1, 7 In most studies, incidence of end-stage kidney disease was reported to be 0.2% to 0.5% with varying follow-ups.4, 8

Between March 1976 and September 2008, 2000 kidney transplants were performed in our center. All kidney donors were living and most of them were related.

All donors were recruited for follow-up in a specialized outpatient clinic. Donors were included until March 2009. Clinical, laboratory, and psychological work-ups were carried out. Donors who have approached end-stage kidney disease at variable times after donation were reported in this work.

Revision of their records was done regarding age at donation, sex, relation to the recipient, kidney function, blood pressure, and other comorbidities after donation. The time to renal failure, the condition at last follow-up, and the possible causes of end-stage kidney disease were analyzed. The corresponding recipients were studied regarding the original kidney disease, condition at last follow-up, and cause and time to graft failure (if end-stage kidney disease was reached).

All protocols involving human subjects were approved by the ethics committee of the institution before the study began, and that the protocols conformed with the ethical guidelines of the 1975 Helsinki Declaration. Written informed consent was obtained from the patients.

Postdonation comorbidities (Table 3) showed that hypertension, cardiovascular morbidities, diabetes mellitus, and hyperuricemia were the most-probable causes of renal failure among our donors.

Kidney donation is a relatively safe procedure with little morbidity and no mortality in most series and registries.10-16 Developing countries have and will continue to rely heavily on living-kidney donation for some time. To date, there are limited data from these regions on general health status and the development of comorbid factors among kidney donors.12

We addressed this issue by starting a regular follow-up clinic. In a recent report from our center,17 the authors have reported the long-term follow-up of live-kidney donors. In their report, renal function at 5 to > 30 years after donation was normal, even though there was insignificantly high serum creatinine level and a lower creatinine clearance. They also noted that overall, 22% of donors developed hypertension and were under treatment, proteinuria > 1 g/d in 3.3% (but none developed complete nephrotic syndrome), diabetes mellitus (type 2) in 7%, hyperlipidemia in 19%, and hyperuricemia in 6%. The authors found that the incidence of diabetes mellitus, hypertension, and cardiovascular morbidity among live-kidney donors were lower than those of age- and sex-matched Egyptian general population, and they confirmed the safety of live-kidney donation.

All the above comorbidities in few published reports have led to end-stage kidney disease at different time intervals after donation.4, 5, 18-20 Screening for these factors and strict adherence to donor eligibility criteria are important means by which we can help to preserve the long-term health of kidney donors.21 In our institution, all donors undergo a rigorous screening procedure to fulfill donor and recipient safety. The criteria for donor selection in our donor series were recently published.22 However, in spite of all our efforts, several reports denoting donor morbidities are emerging.

Anderson and associates24 reported a small decrease in renal plasma flow in kidney donors at a mean of 10 years follow-up, which was similar to that seen in the normal population. In a review of 402 donors with a mean follow-up of 12 years, Fehrman-Ekholm and associates,24 reported that the remaining renal function of kidney donors did not deteriorate any faster than would have been expected as a result of normal aging. However, they also reported that one-third to one-half of patients developed hypertension after donation. A recent metaanalysis of living-kidney donors predicted that kidney donors may have a 5 mm Hg increase in blood pressure within 5 to 10 years after donation over that anticipated with normal aging.25

A significant milestone occurred in 2002 upon publication of the united network of organ sharing/organ procurement transplant network study (UNOS/OPTN) noting that 56 out of 6371 donors developed end-stage kidney disease and were listed for deceased-donor renal transplant.29 They also reported that hypertensive nephrosclerosis (43%), focal segmental glomeruloscleroses (16%) and chronic glomerulonephritis (13%) were the causes. A more-recent UNOS report of 102 donors was published.6 All were waiting for kidney transplant. Hypertension, diabetes mellitus, glomerulosclerosis, and other glomerulopathies were the main causes (28%, 9%, 13%, and 16% respectively).

Our results coincide with the work recently published by Ibrahim and associates.32 The authors concluded that kidney donors have a normal life span, similar to the general population, as well as having no excessive risk of developing end-stage renal disease, and are enjoying an excellent quality of life.

Finally, we conclude that live-kidney donation is a safe procedure, with a minimal complication rate in long-term follow-up. Strict eligibility criteria, close follow-up, and use of kidney biopsy for donors with declining renal function after nephrectomy are mandatory for better understanding of the natural history of their illnesses. Furthermore, consideration also should be given to establish a national, as well as an international, database for living-kidney donors for better evaluation for the policy of living donation. 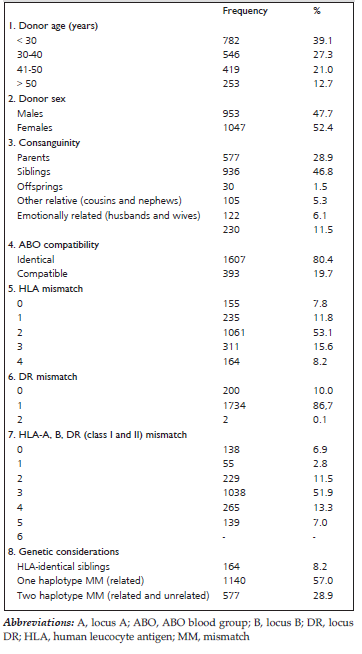 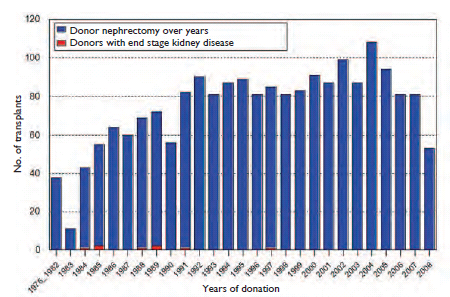 Table 2A. Demographic data of donors with end-stage renal disease.

Table 2B. Demographic data of donors with end-stage renal disease. Table 4. Original renal disease and outcome of the corresponding recipients.